So, full disclosure, I skipped Pipes out of this Legends assortment. Huffer was already a stretch on that mold, and Pipes just isn't there at all. But I really enjoyed the Skrapnel mold, so I wanted to go ahead and grab its recolor. What surprised me though, as I looked at it more, it actually makes for a pretty good Chop Shop. 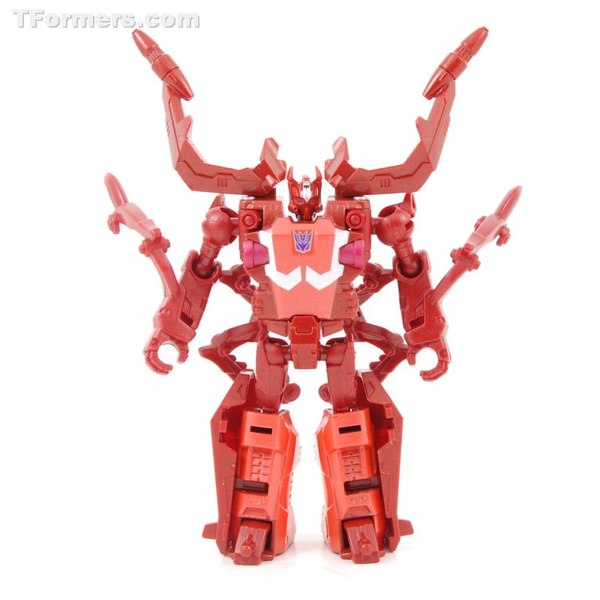 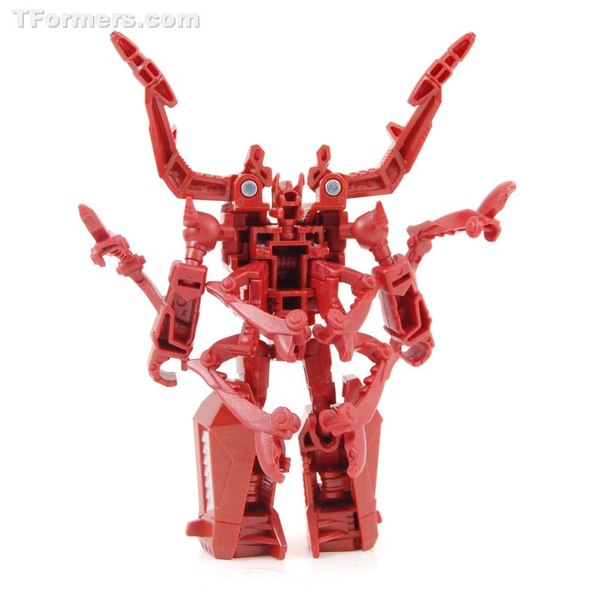 So, physically the toy is almost the same as Skrapnel, with the same articulation all around, and the same potential points of interference from alt mode junk. 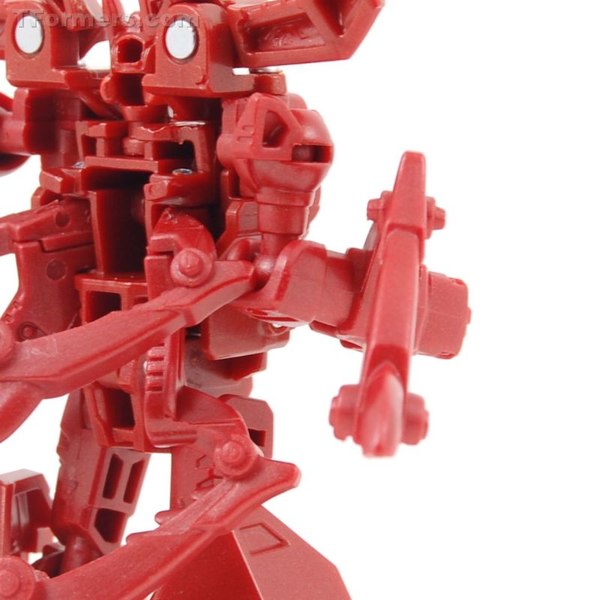 The tolerances are a little different from my Skrapnels. In most cases this presents as a feel to the joints I can only describe as more crisp. I realize this is bizarre and not helpful. There's a certain degree of resistance in the ball joints until you push them just enough that they slip out of place in a quick sharp move. The feeling of them is something I'd describe as a snap, if that didn't have negative connotations with toys. It's a good feeling, and it makes it seem like this iteration of the toy might have a little more joint strength. This is true in most places. But one spot is the opposite, which is the transformation hinge of the pelvis. It doesn't quite have the right tension when it's in position for robot mode, so it'll easily pull down when you try to move the legs. Not the worst thing, but it could get a bit annoying. 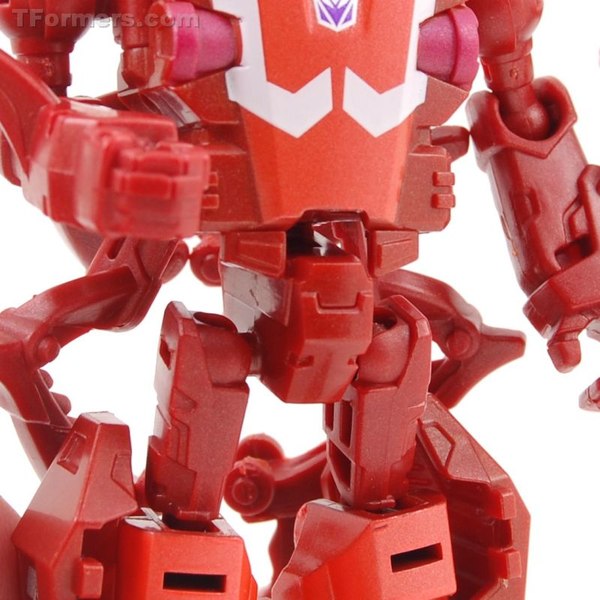 Chop Shop's new tooling is the head, which is... certainly an interpretation of Chop Shop. I can't find anything it really matches. Nice little head sculpt though. It can swivel the same as Skrapnel's head, and is still hard to do because it's in such a cramped little space. 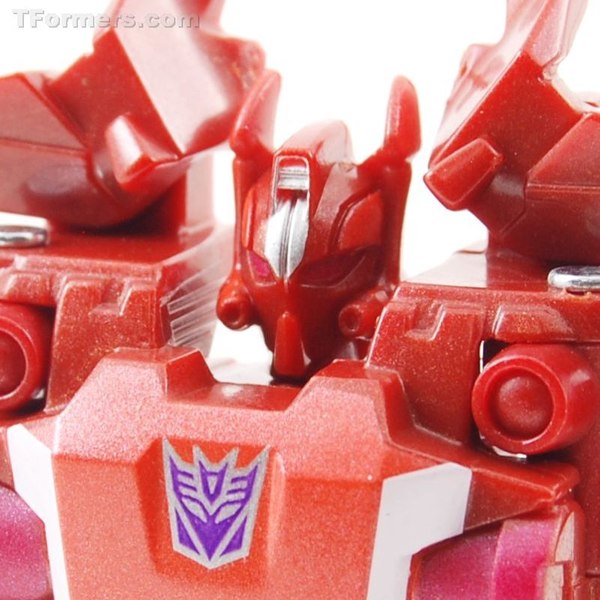 I'm not sure how obvious it is on camera, but the eyes are painted red, and that's a problem Chop Shop has in person. The red paint that appears on the toy contrasts very poorly to the surrounding reddish brown. I don't think there's much of it, but it's kind of hard to tell since it doesn't stand out at all, except to a camera sensor, apparently. 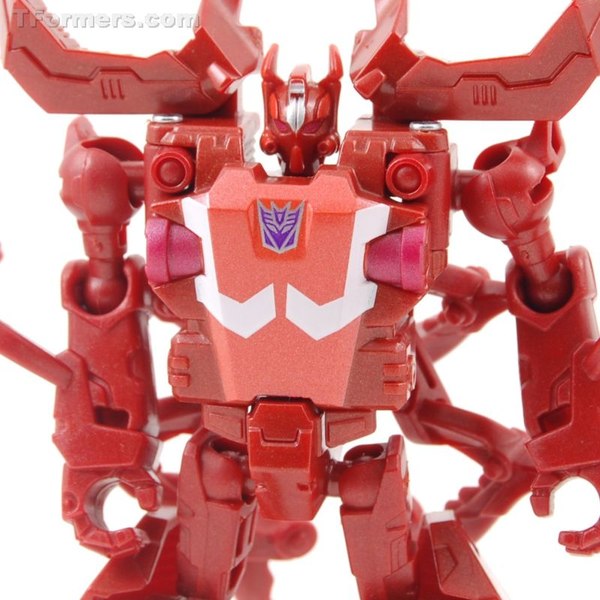 Apart from that I do like the deco. That reddish brown with orange is a great combination, and laid out really nicely. The white chest stripes provide some brightness, though I honestly could take or leave them. It all looks very nice for being so simple, and the simplicity is probably working in its favor, really. Still, the major thing you look for in a redeco is an attractive deco, and Chop Shop has that. 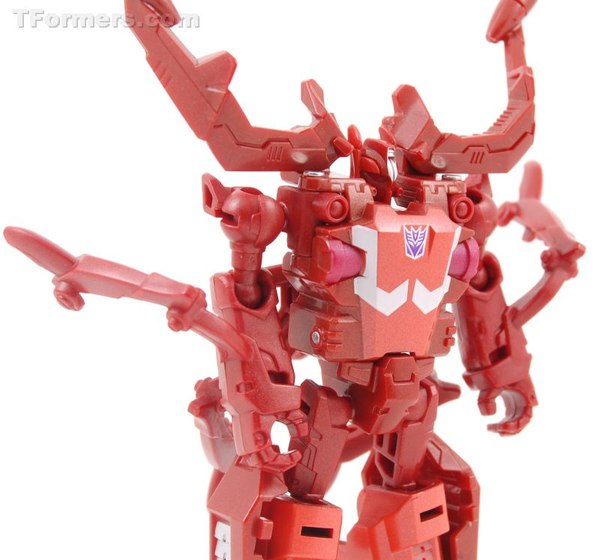 What's cool though is how the mold works for Chop Shop. The chest isn't all that similar, and that's a lot of what the white stripes try to correct for. But the jaws on the shoulders - while styled differently - match up, the bug legs on the back are close, though that's hardly a unique feature to the character or original toy. 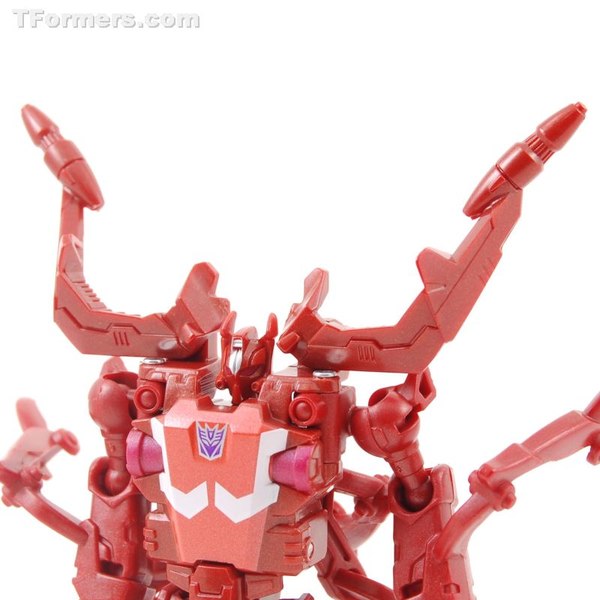 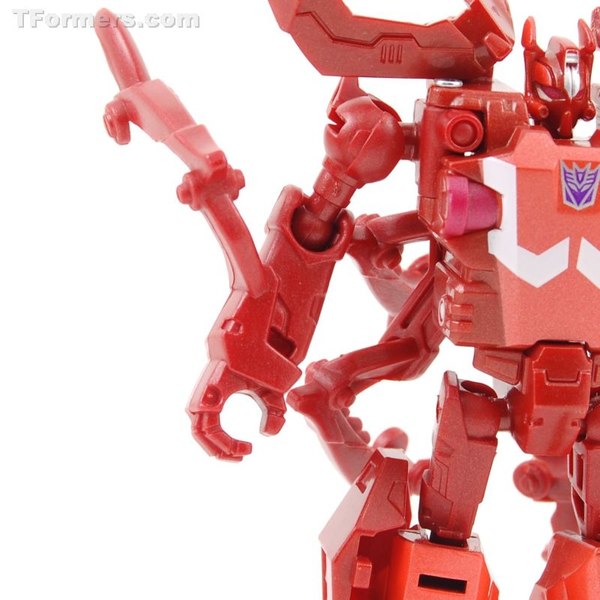 But what really surprised me was the shell panels on the lower legs are actually similar to the look of the original toy. I don't know if that's just a happy coincidence, but that's not nearly as common a thing as bug legs sticking out, and does more than you'd expect in tying the two iterations together. 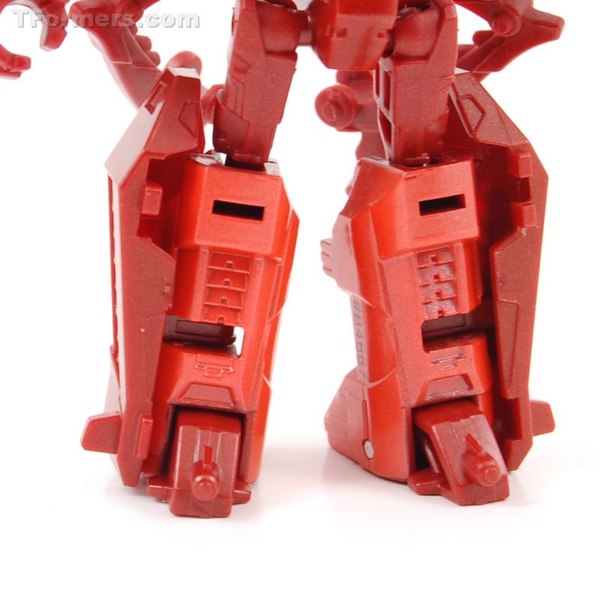 In bug mode, I found another spot where the tolerance are a little looser. The abdomen isn't tabbing together as solidly feeling as Skrapnel did. It seems to hold together fine, but when you're tabbing it, you can't feel it catch nearly as much. 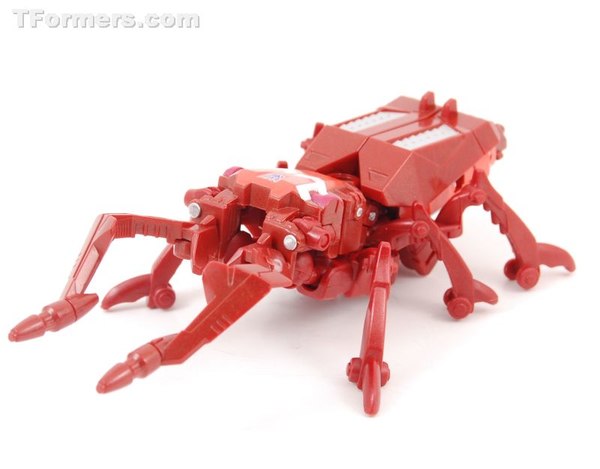 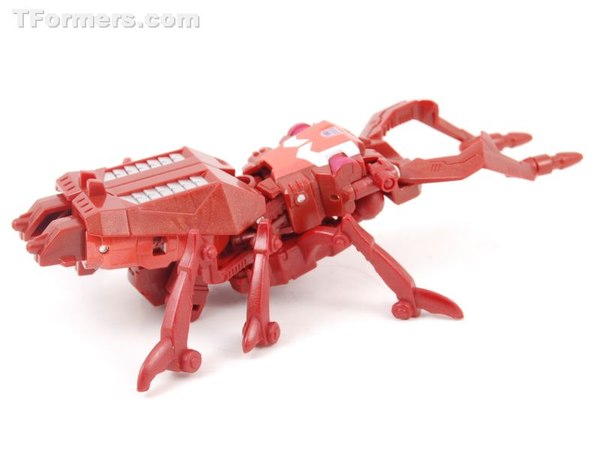 I like little bits of how the deco lays out in this mode. Particularly the orange peeking through under the abdomen from the robot legs. It gives it an impression of armored shell that I like the look of. 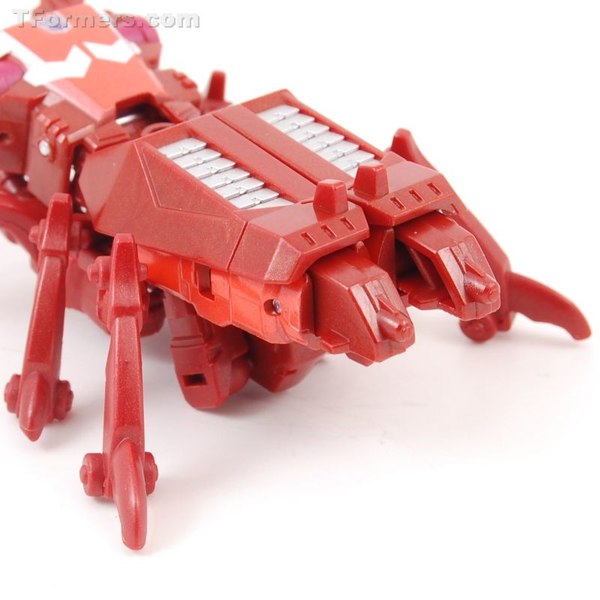 The white stripes are also helpful in this mode, giving a sense of definition to the head and making it a little more distinct from the thorax. Basically they help imply a more correct insect anatomy. 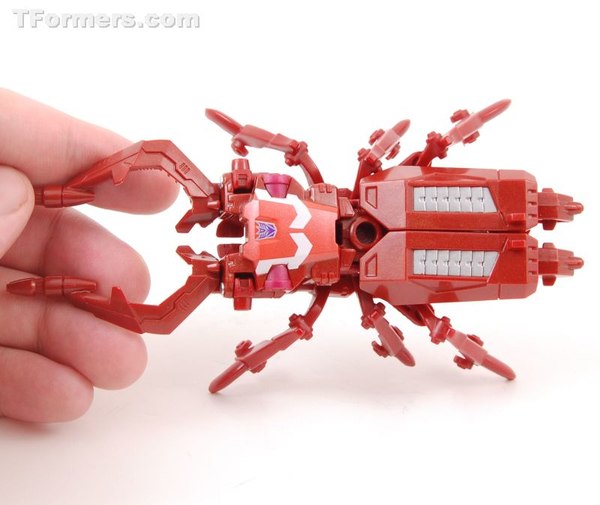 There's not much more to it than that. Silver on the abdomen gives some new contrast, which is nice. But otherwise it's a lot of single color base plastic. That's certainly fine in this application, it just doesn't leave much to talk about. 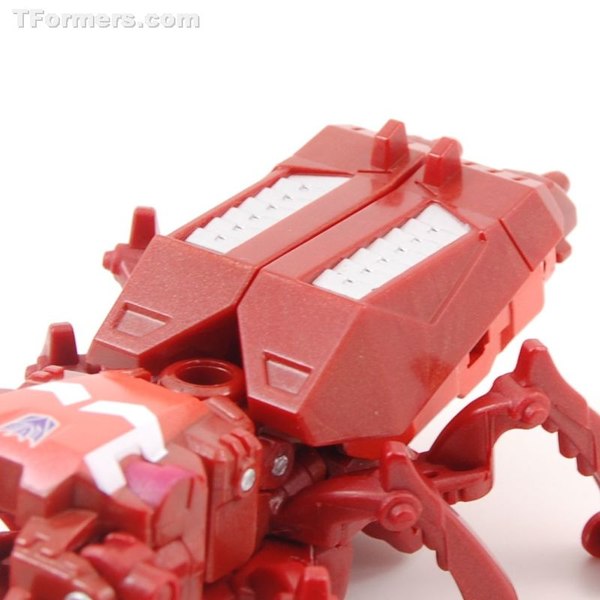 Apart from opening the jaws, the insect mode is again pretty much immobile. And of course there's no partner figure to plug on to increase what the alt mode can do. But like everyone has taken to doing already, you can always attach 2013 Legend partner Chop Shop if you have one handy just for some goofy bug on bug action. 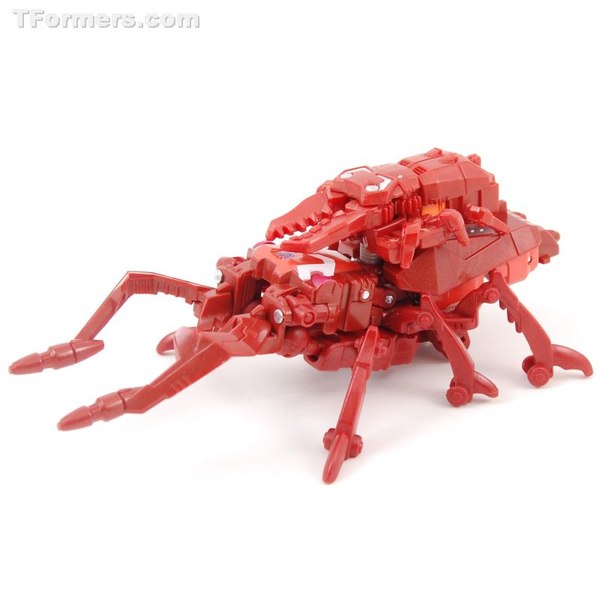 Actually, this highlights the underlying problem with Chop Shop's deco, and it's one that partner figure shared. The main brownish color is far brighter and more to the red side on these newer toys. The original Chop Shop still had a reddish lean to it, but it was a lot darker looking. I like this color just fine, don't get me wrong. I guess it's just that I wonder where this color came from for the character. I'd almost suggest it's because the brighter color is more eye catching, but that hardly explains the tiny accessory Chop Shop 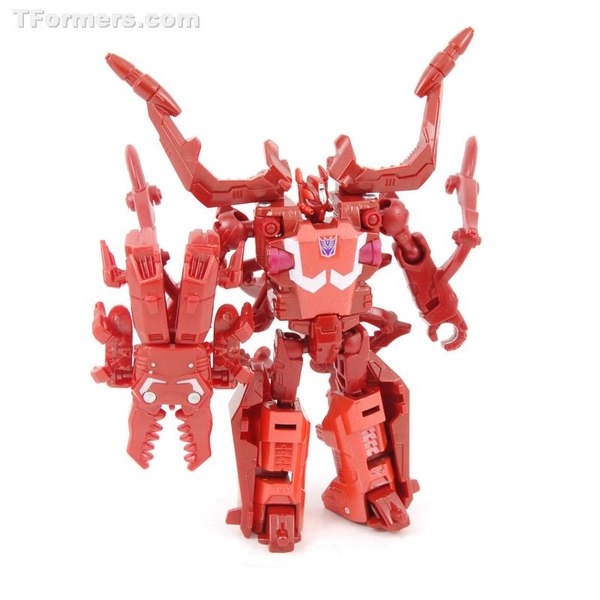 The Skrapnel mold was a favorite of mine when it came out in 2014. While I (and probably plenty of others) would have rather seen the next Legends Insecticon be a Kickback, I have a hard time complaining about another chance at this mold, and in really nice colors. Much like Windcharger, Thundercracker and the other recycled Legends molds from before Combiner Wars, this carries a hard reminder of the reduced value for the price point that we experienced, but if you're not looking to dwell on that fact, Chop Shop is pretty nice, and I'd say worth picking up if you run across one. Or if you're thinking of ordering the full wave from an online retailer, Chop Shop along with Buzzsaw and Shockwave make for three out of four that are really enjoyable and might justify a batch purchase. 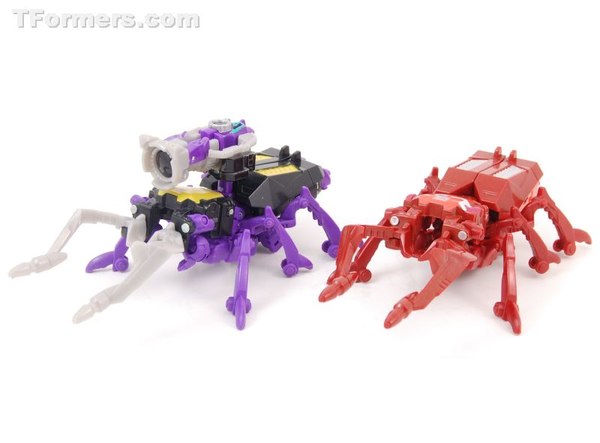 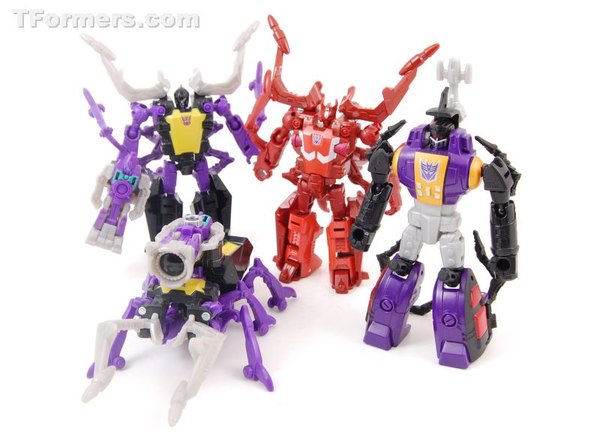 Now, I just wonder what we're more likely to see first: Bombshell recolored and remolded as Barrage, or a new mold Kickback? I should be careful though, this could turn in to a monkey's paw and somewhere in 2016 we'll end up with a Kickback that turns from bug to spy tablet instead of having its regular robot mode. Place bets now!