This Transformers Combiner Wars review is brought to you by BigBadToyStore. If you're looking for these or any other Transformers or other toys, head over to bigbadtoystore.com to see all the great items they have.

We'll get to the remainder of the Combaticons soon enough, but right now I want to get Scattershot out of the way. See, for a time, I felt like this was not really so bad as expected. It was a major shock at SDCC this summer, and it never got any better through successive rounds of new pictures. But it started to, having it in person. I felt basically okay. And then something happened, and all was again anguish. But, I'm getting ahead of myself. Let's start at the beginning. 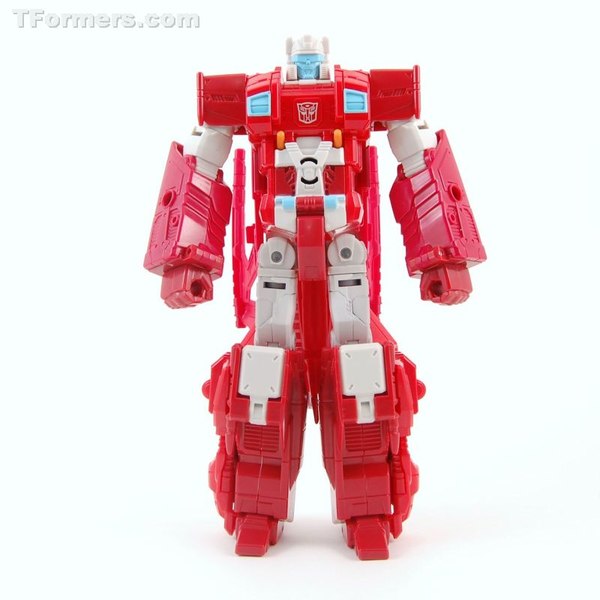 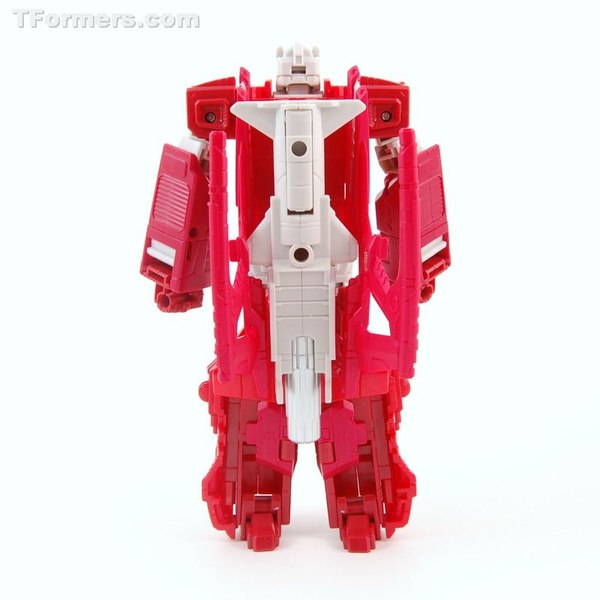 Scattershot is still largely Silverbolt. All the functional aspects are the same, the changes are only cosmetic. With the wings folded back and the cannon properly stowed, there's barely a physical divergence from Silverbolt. 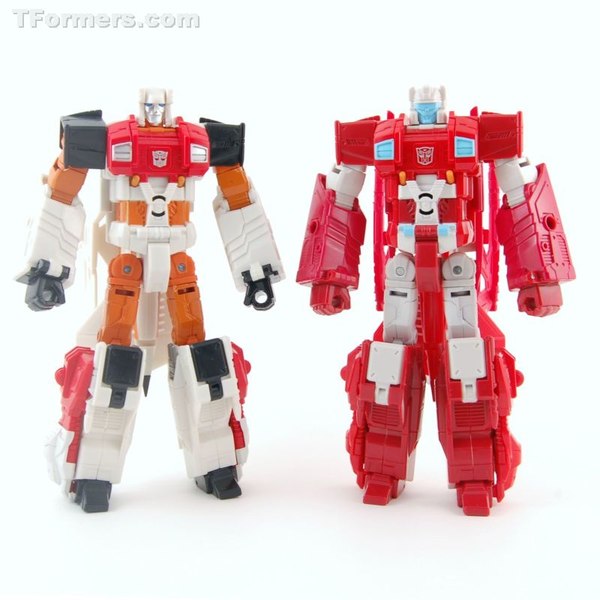 Only the head, which has a detailed sculpt, and G1 accurate - if not very appealing - solid blue face. 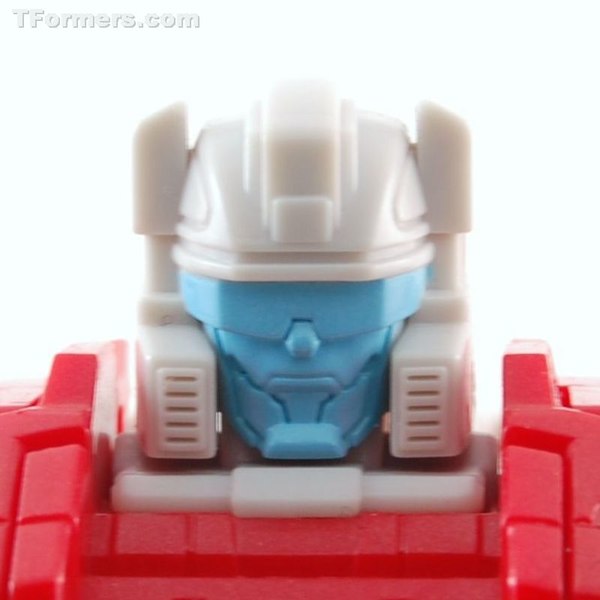 The neck shares Silverbolt's excellent range of up and down movement, but has no side to side tilt possible. It's a would-be-nice, but the absence doesn't hurt much. I'm going to leave the rest of the new parts for vehicle mode where they're more relevant. 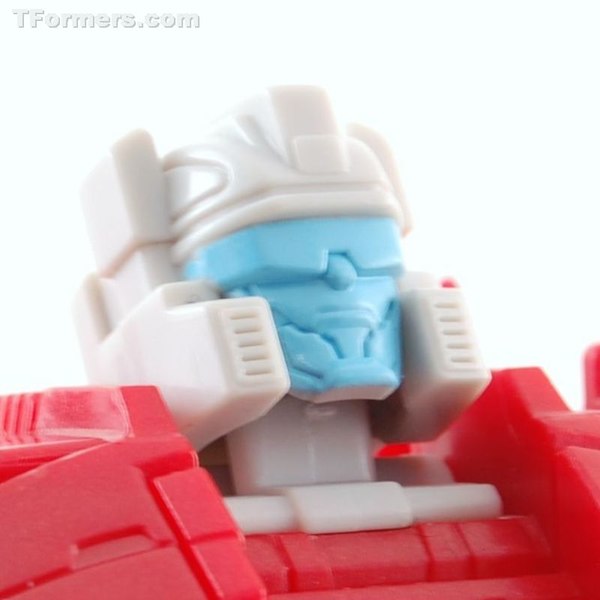 This body comes off a little on the slim side for Scattershot, and of course lacks distinct details. The deco tries to make up for this, but to limited effect. One problem seems to be that it can't decide what it's drawing from. These blue vents are a toy sticker detail, for instance. But if we're looking at toy accuracy, the torso needs to be much more white than it is. The cartoon has a more red body, but would call for different kind of paint detailing to get that right either. 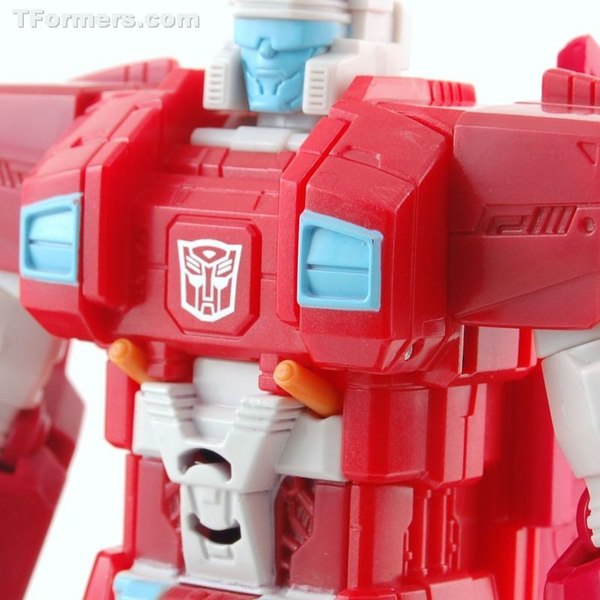 And some things are plain victims of a conflict between plastic layouts and limited paint operations, like the white biceps which match nothing I can think of. 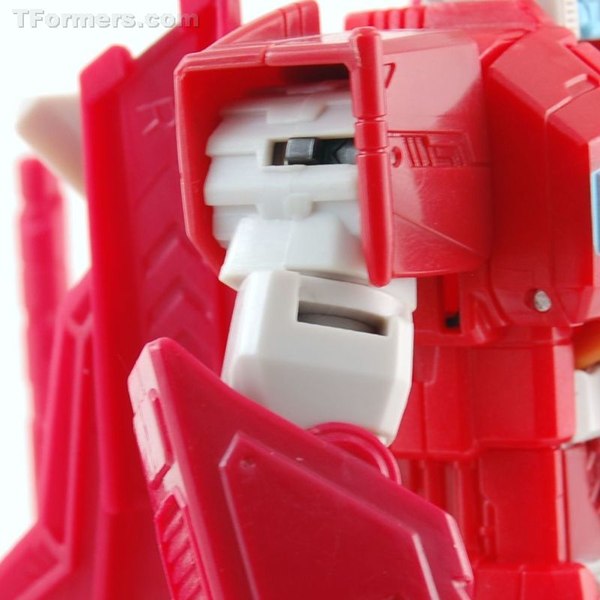 And then you have some pointless detail like these bits of blue at the waist which are barely noticeable, but eat up part of the paint allotment just the same. 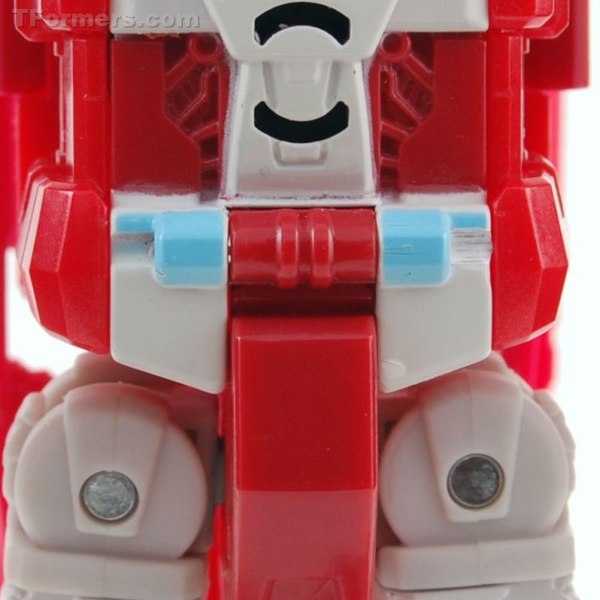 I have to think too that some of the deco choices made were probably just to try to get this as distinct looking from Silverbolt as possible while staying in a Scattershotish pattern. But there's a more fundamental issue with the deco than just bizarre paint choices. A whole runner of parts is in the wrong color. 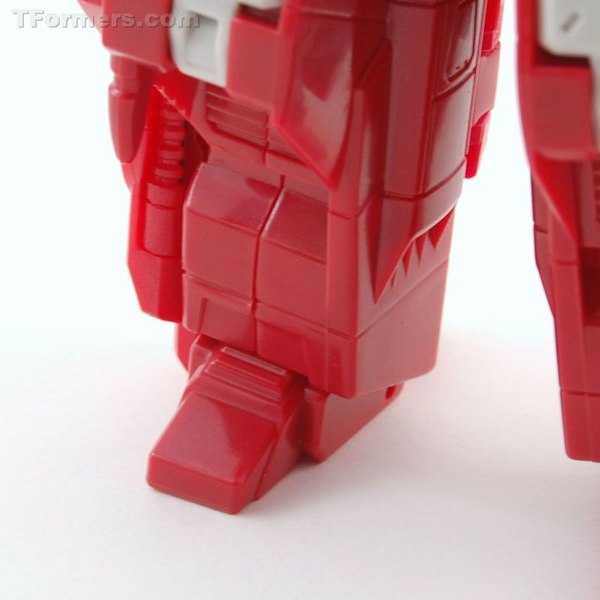 The CG render that was used for the packaging shows a distinctly reddish-brown color at the shoulders, thighs, and fists. But the toy produced just has a slightly less saturated red in those places. There's no brown to it at all. And that brownish red is to me a distinguishing characteristic of Scattershot's appearance. More than that, it's a good contrasting color to the bright red otherwise making up Scattershot's colors. This color does have definition from the main red color in person, but far less so digitally. That's been one of the main causes of distaste and complaint with Scattershot prior to release. 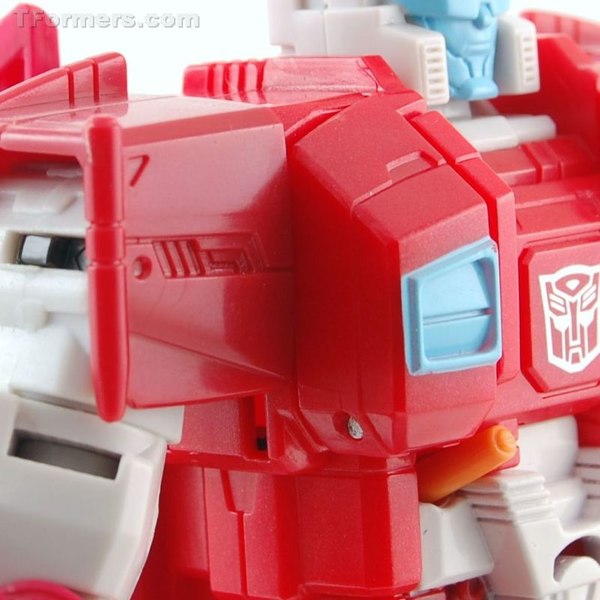 At least as far as my copy is concerned, Scattershot is a pretty good representative of its mold family. The joints have a good tightness that's pretty uniform. It does have the same flaw as my Cyclonus though, where one hip joint has a lot of play in the socket. And because of how the toy is constructed, that's not something that can be easily fixed by the consumer.

Transformation isn't any different despite the new parts. The nose piece might snap in a bit more forcefully, but all the motions are just the same.

I really can't make up my mind about this. I guess it's some kind of spacecraft so it doesn't matter how much it looks like a flying box. And it doesn't work as badly as photos might have suggested. 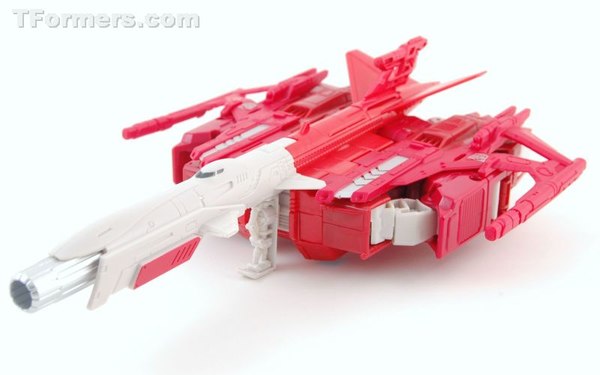 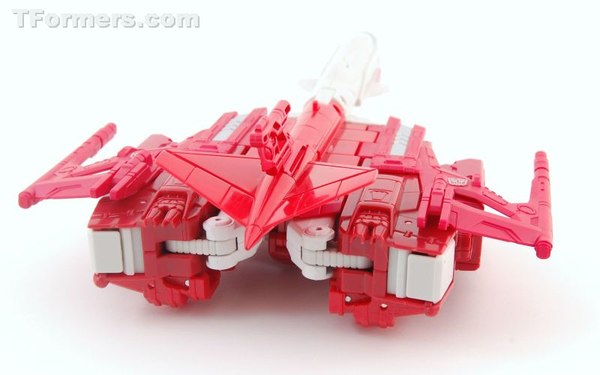 The open spaces in the wings from most angles don't look terrible. 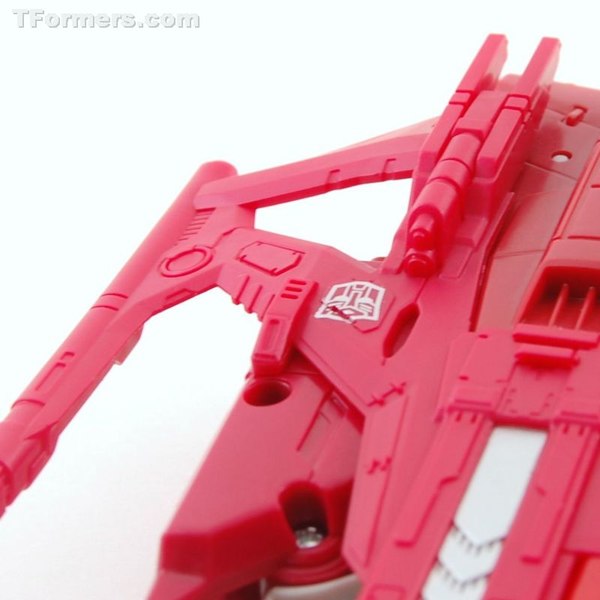 And from the bad angles, it's really only a case of being able to see the fists through there that hurts them. 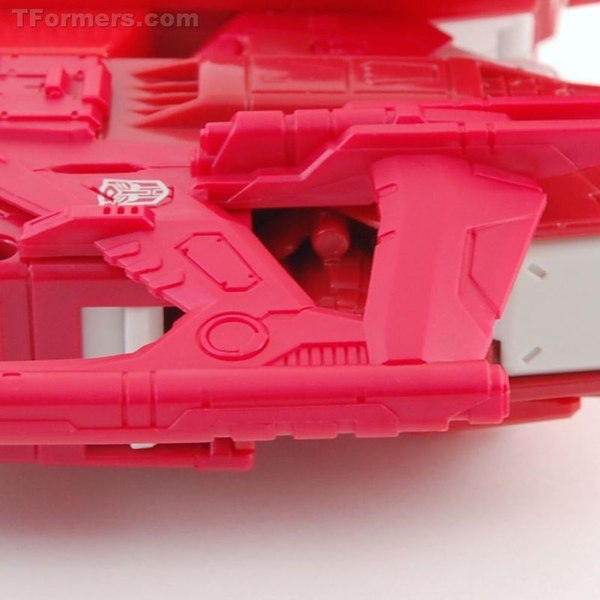 I can almost deal with it, but then I look at the big tailfins. And the NOSE GUN. And the fuselage with passenger windows. And it all just floods back how much of a mish mash of non-matching parts this is. And almost every visible element is a different color. White at the nose. Bright red down the core. The magentaish color on the wings. The non-brown of the engines. And a new wrinkle in the red painted upright on the tail that matches nothing at all. It's a huge mess! 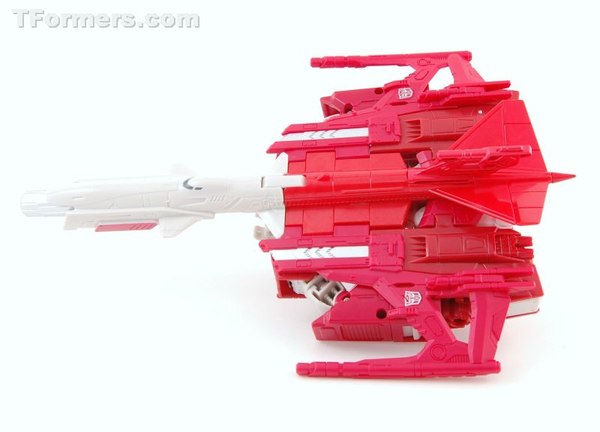 But the worst thing has to be the nose because the shape just makes me mad. It starts as a cylinder to match the carry over sculpting from Silverbolt's parts. Then you get this bulge up top for a cockpit. Then it flares out, just barely perceptibly. The canards try to cover it up, but it's there. And then it turns square on the sides but still round on the top and it bulges up again and... aaaagh. It's like five different people built this one part all at the same time without ever talking to each other to find out what to build. 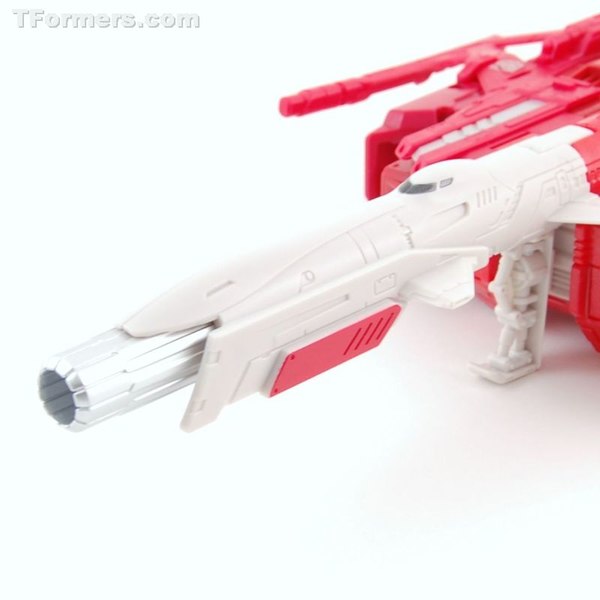 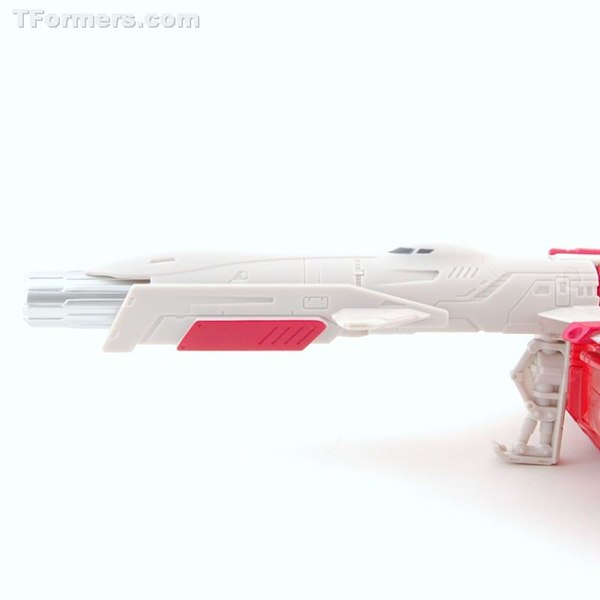 Scattershot lives up to his name. Besides that huge nose gun, you need only glance around the patchwork that is the vehicle mode to find more guns. 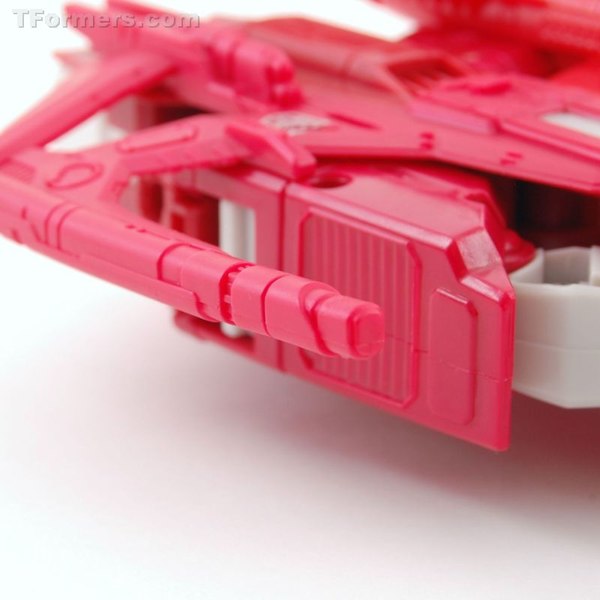 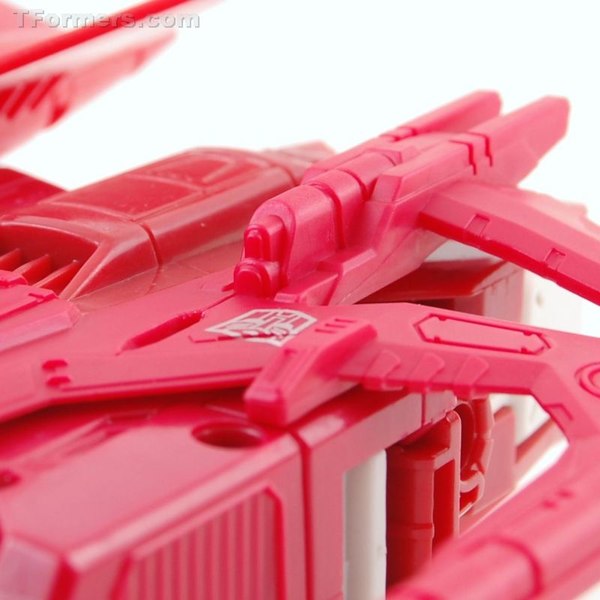 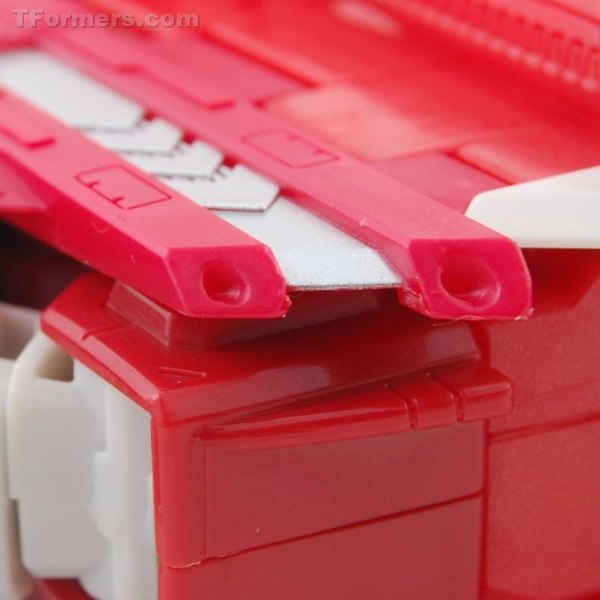 Even tip of the tail guns. At least they got one thing to seem consistent here. 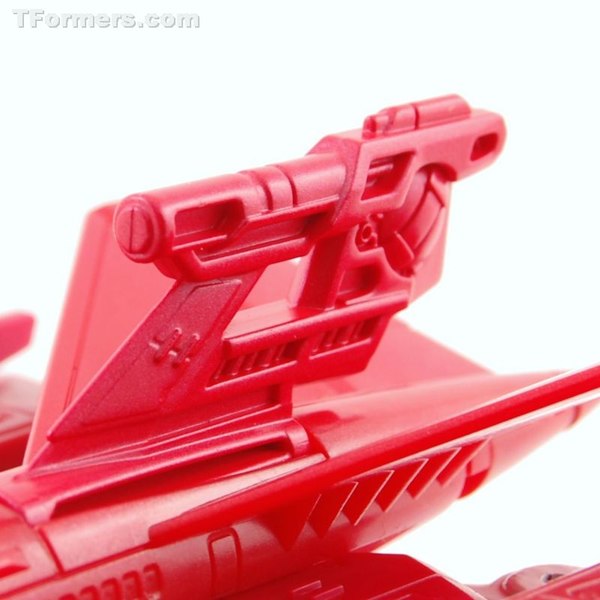 So, the wings are a different material from everything else. It's a bit flexible, but not like rubbery bendy. It has rigidity, but also a bit of give. I suspect it's because of the narrow gun barrel and strut shape of the pieces that this was chosen here. The nose and new part of the tail are the regular feeling plastic since they wouldn't endure the same potential stresses. But you know, all this and it's not even the worst part yet.

Look at this thing. 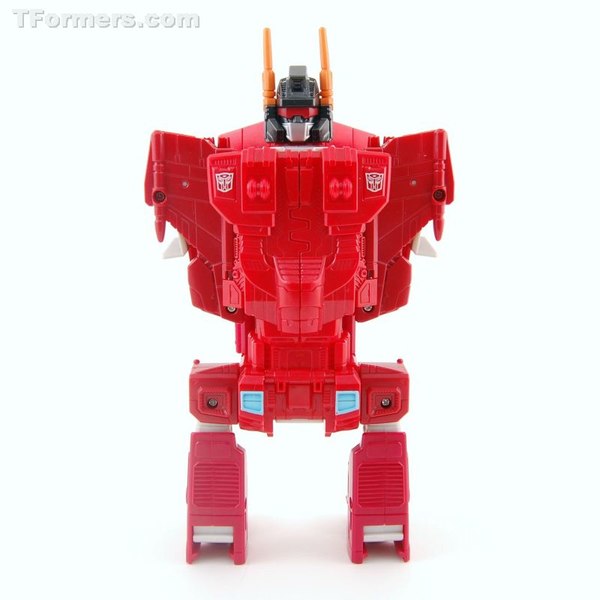 I had an extended conversation with friends about exactly what's wrong with this torso mode, and it's actually pretty simple. Majorly it needs that correct brownish plastic around the shoulders to help define the body shape. As is it fades in to a sea of red. 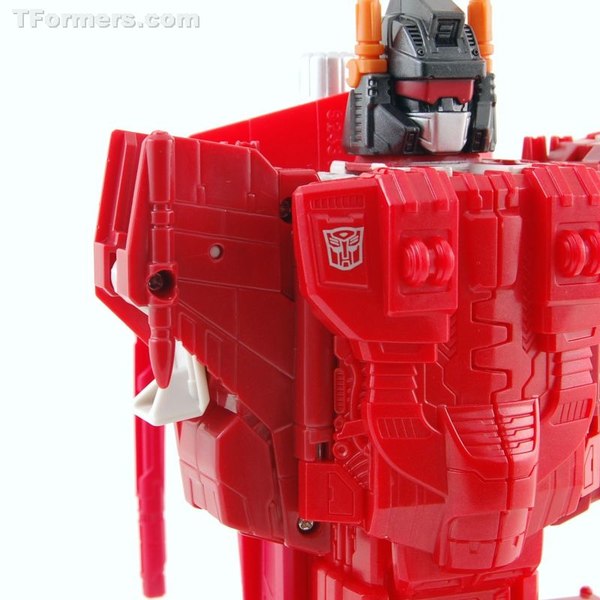 And that's the second thing. Scattershot's torso mode is supposed to have white thighs. Potentially with brownish trim, but mostly it's white thighs. There's a tiny bit of white from the robot biceps, but that is not cutting it. This whole facing surface needed to be white to get the right color balance. 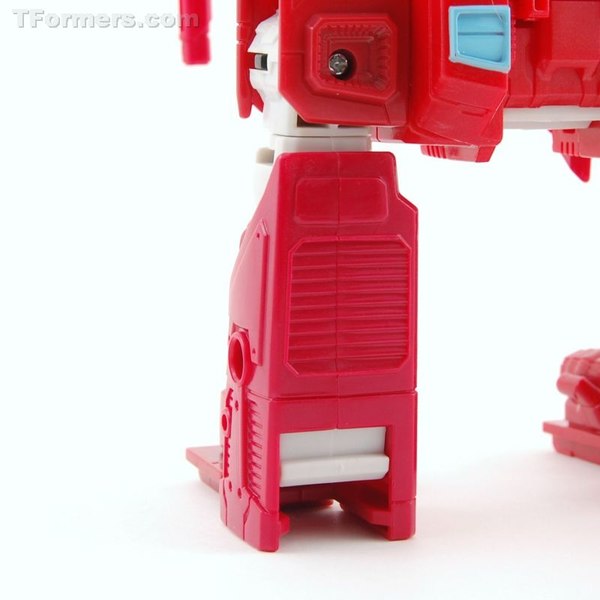 And then finally the obvious problem, the head is the wrong color. And this is what started me down the road of hating Scattershot. Let me explain. 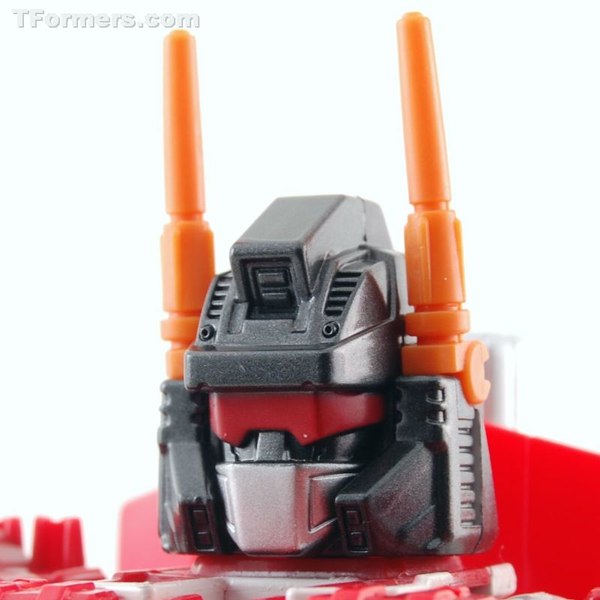 Actually, let me remove a screw. See that, at the base of the hole? Or slightly more clearly at that scrape on the left edge? That's the plastic color, this head is molded in white. Let me decompress this for you. The head is white plastic, which requires it to be painted no matter what. That means that the head could theoretically have been ANY COLOR. Like, I don't know, the reddish brown of Computron's head. But no, confronted with the capability to have the head be whatever color was needed, someone decided to have it painted in dark gunmetal and look almost identical to Superion's head. 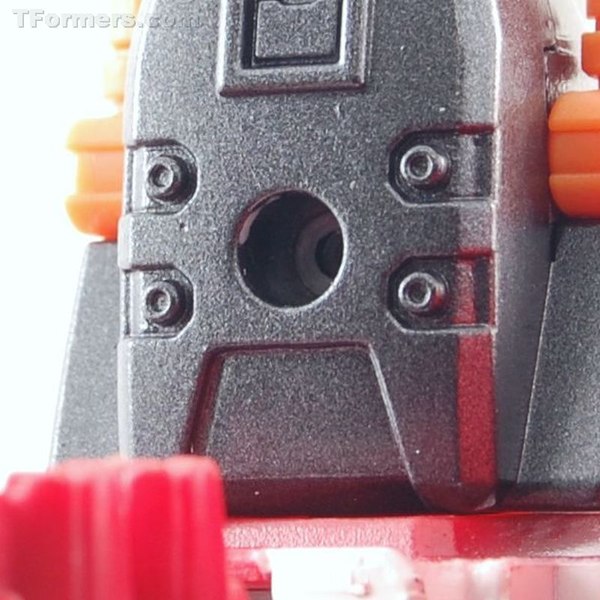 I'm about ready to wrap this up, but first, Betatron is officially made by attaching Ironhide, Sunstreaker, Prowl, and Mirage. But I skipped all of them. So instead have the reddest combiner I can make with the toys I do have. 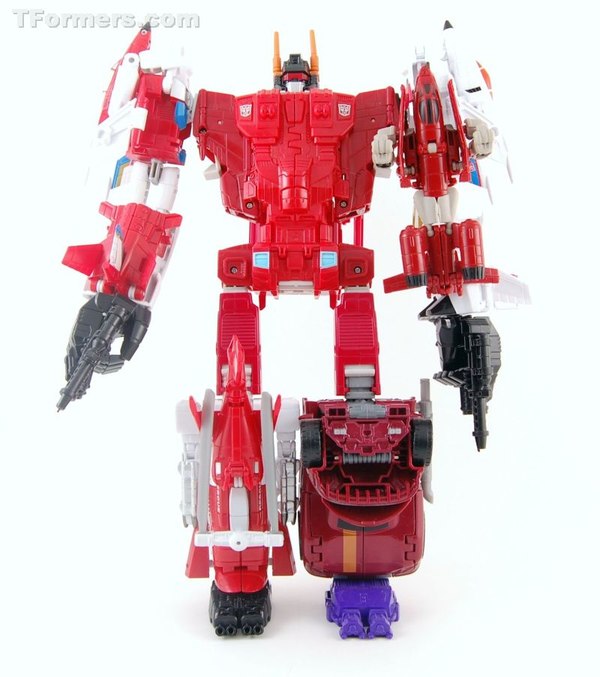 Oh, shoot. I forgot, Scattershot comes with Silverbolt's weapon once again. This time fully silver painted. Which led to the gun and shield components being firmly stuck together. Which honestly seems like an appropriate cap on this toy experience. 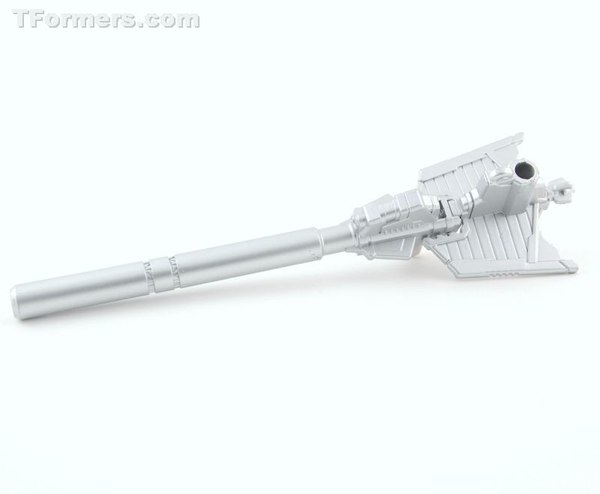 Before I noticed the combiner head was painted and then decided to open it up to see what the base color under it was, I actually kinda was okay with Scattershot. It wasn't as offensively solid red as photos indicated. It wasn't right, but I was expecting worse. It was something I could have lived with. 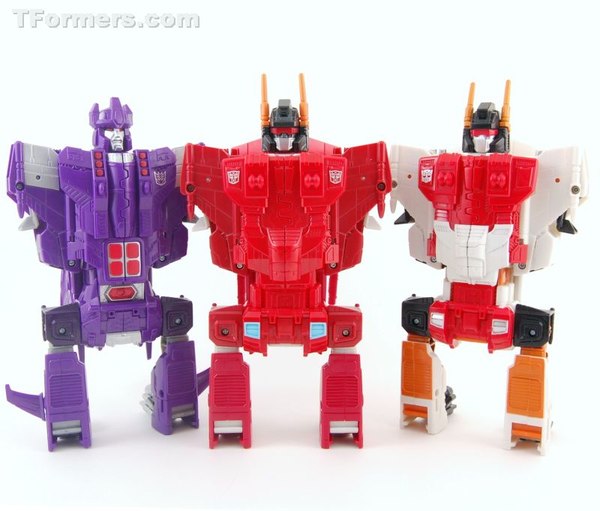 But realizing the depth of basic human error in making this as demonstrated in choosing to make the combiner head completely wrong colored, it set me over a cliff, and at the bottom was anger and hatred. Perhaps in time the intensity of the feelings this toy has produced will fade, and I'll once again be able to feel tolerance for what it is. Not really counting on that though. I kinda don't even want more Technobots now. It'd be easy to say that they'd just screw them up like they screwed up Scattershot, but that isn't it. I more feel like Scattershot was done so bad, what if the rest of the Technobots actually come out good, but we're stuck with this red pile as the core of our Generations Computron? 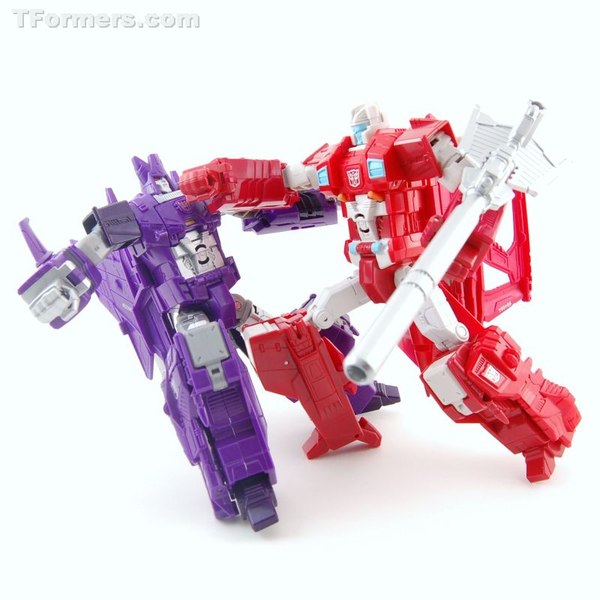 Another take at this with more attention paid to getting the deco right could honestly help Scattershot a lot. If a Unite Warriors one becomes a thing and they pay closer attention to its colors, I think I'd consider it. But for where we are right now, I think I want Scattershot to be a one off and able to just be forgotten. I won't blame anyone for wanting to try to go future proof and grab this just in case the rest of the team turns up later, but that's the only possible selling point I can envision.

And I couldn't even figure out a way to get a half decent turret mode out of it either. Sad.