This Transformers Combiner Wars review is brought to you by BigBadToyStore. If you're looking for these or any other Transformers or other toys, head over to bigbadtoystore.com to see all the great items they have. And be sure to check out Combaticon Awareness Week to read about some Combaticon history and find all of our Combiner Wars Combaticon reviews. 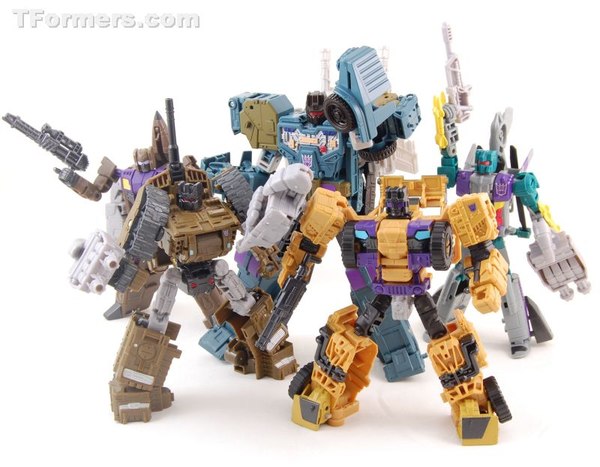 The process of changing Onslaught to a torso is a little different from Hot Spot. The legs are just like going to vehicle mode, so it's again more work to get them collapsed in thanks to the joint stiffness. You specifically need to leave the chest wings pointed forward until you attach arms. When opened to the side, they completely block the combiner port. So for installation or changes to the limbs, those parts have to be moved. But they also tab solidly in place, and help secure the arms in their sockets, so it's not all inconvenience. 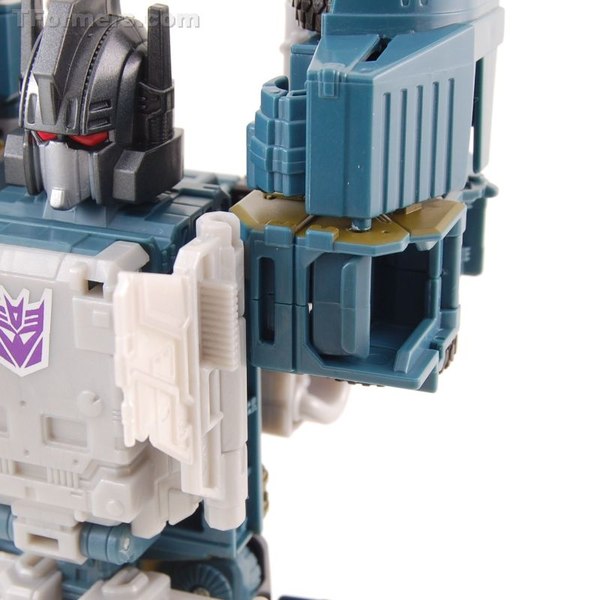 Bruticus does not look bad at all. It has a distinct advantage over Defensor or any other combination you might make with Hot Spot as the core, because the actual hip joints are hidden behind the new armor. It solidifies the look of the body in a nice way. 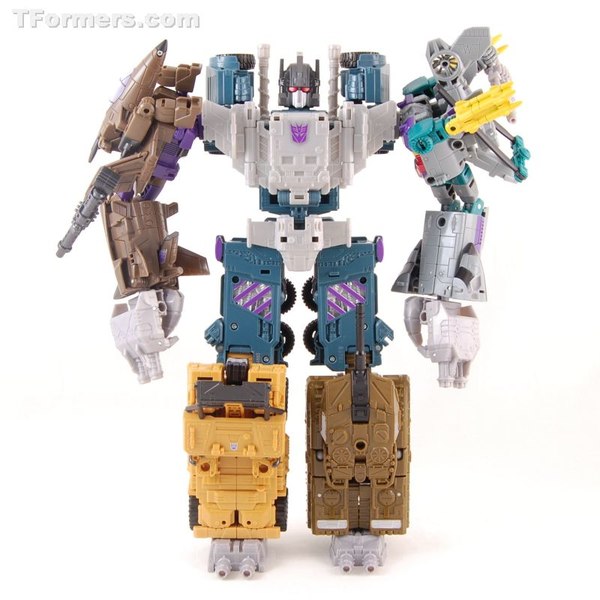 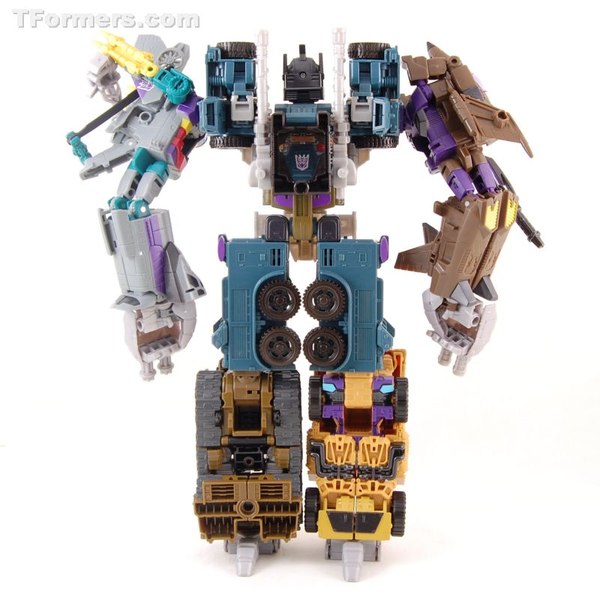 I find Bruticus wants to hunch forward somewhat. Even to the point of then following through and topping over. I can't say if that's particular to my toys only, or just kind of happens. The only solution I've found is clicking the hips back one notch. That leans the torso back a little bit which I don't find ideal, but it does fix up the balance so I don't need to worry about a collapse. 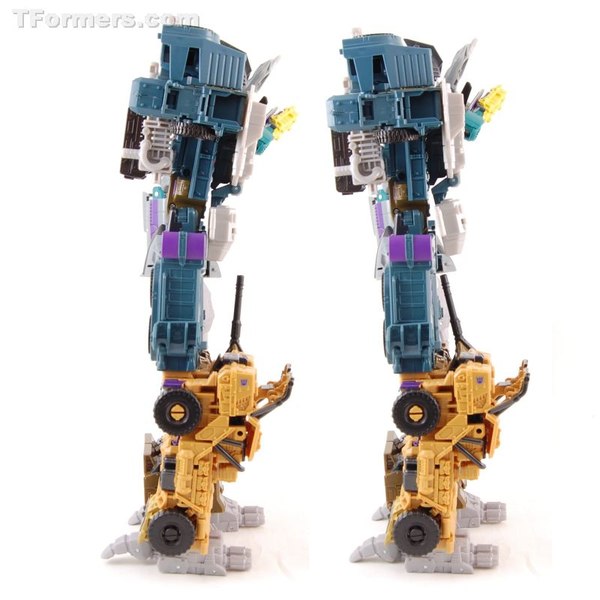 The arms are a known quantity, so I'm not going to pay them much mind in terms of articulation. But I will note that despite the armor piece over the pelvis, the hip joints can still be used. The transformation hinge was placed so it will also let the armor lift when you bend a leg forward and not impede movement. 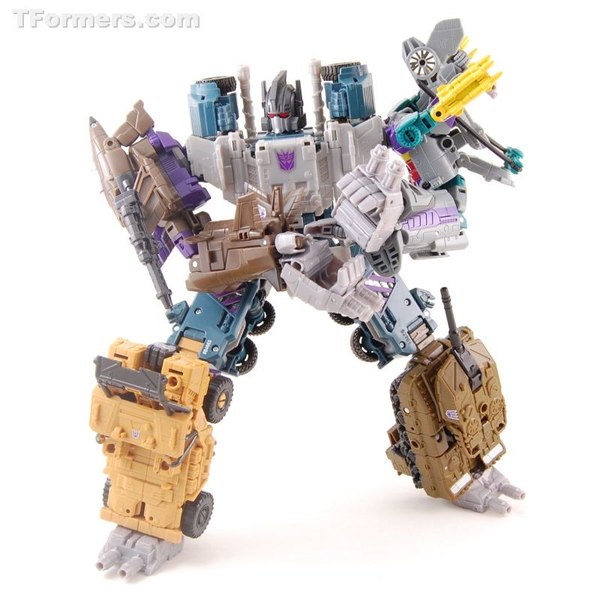 Using the other hinge there, you can even maintain the downward orientation at the same time. This works for as far as the hips are otherwise capable of moving forward. 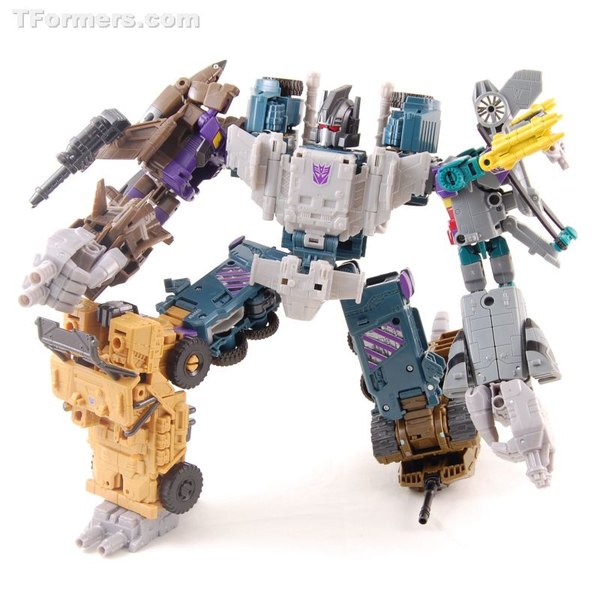 I'm pretty pleased by how well the torso plate changes the visual identity of this mold as a body. Taken along with the different arrangement of the robot arms at the shoulders, and it comes out pretty distinct looking. 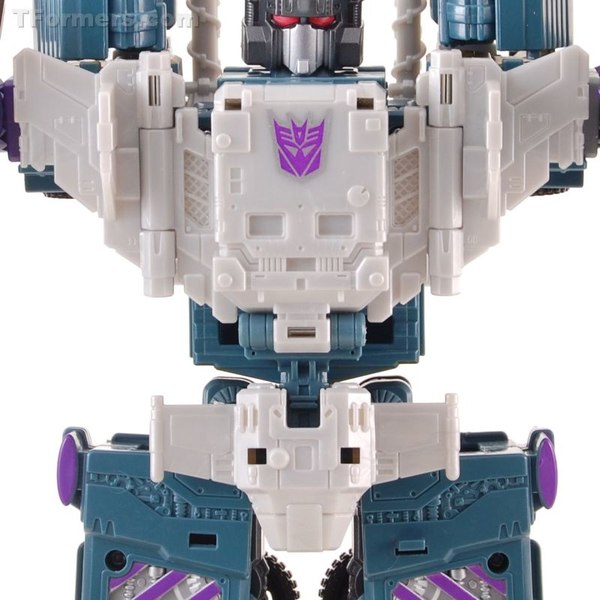 I feel like the only thing clearly giving this away as being the same underlying torso as Defensor is in the legs, which have no meaningful detail changes. 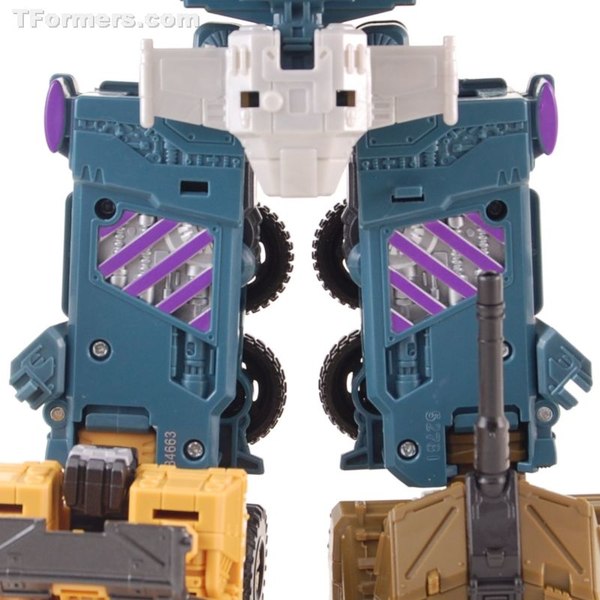 And check out this head sculpt. Looking nice in gunmetal and silver, with the great big red eyes. The sculpt is just detailed enough without being overly busy, hitting all the highlights of the Bruticus look. When looking forward, the ball joint neck has a pretty nice range of movement to all angles. It has a limited degree of being able to turn to the sides, and it also loses its tilting for the most part when turned. The head can go farther to the sides but it feels super uncomfortable making it do that. 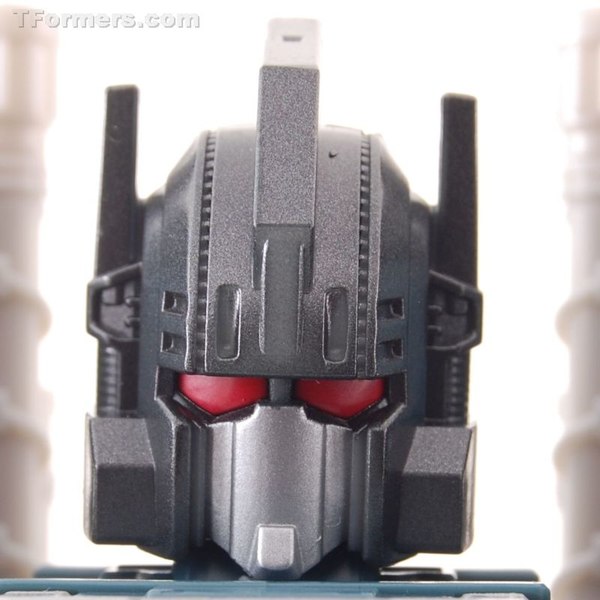 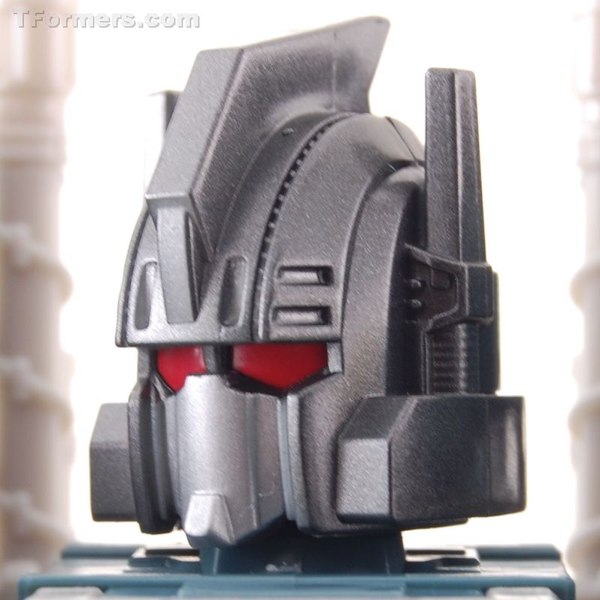 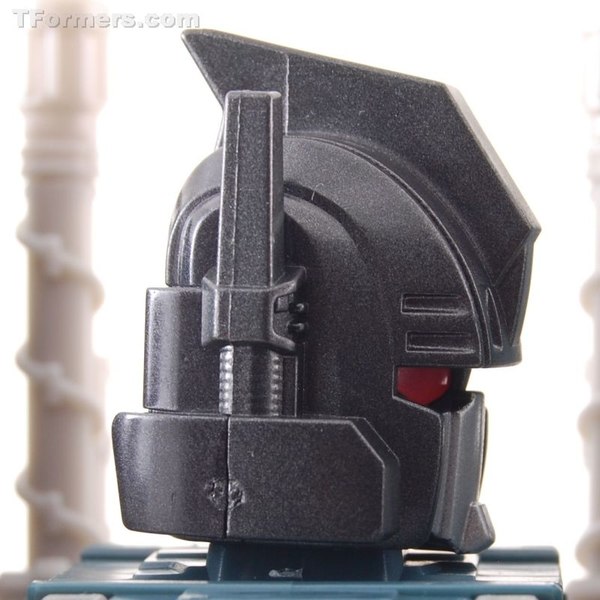 A possible alternate arrangement of the torso rotates the shoulders down so the robot arms aren't sitting on top. This also adds a little bit of visible mass to the torso. But as a consequence, the shoulders are far less stable and are likely to move along with the arms. It's a little cleaner looking but I tend to leave it the official way just because it's more solid. 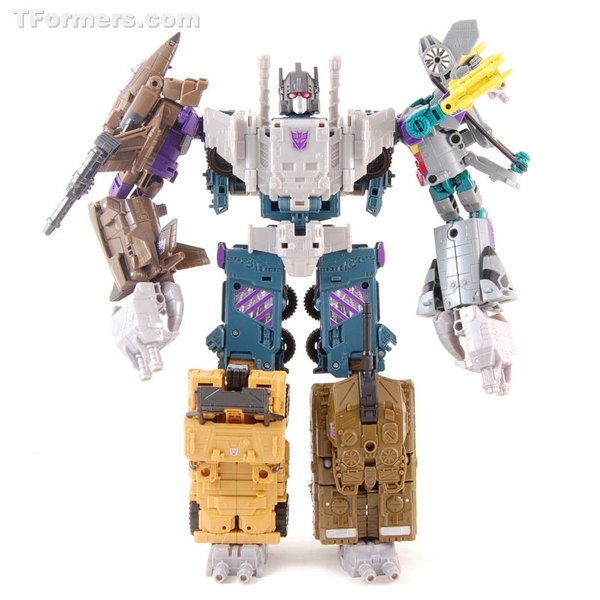 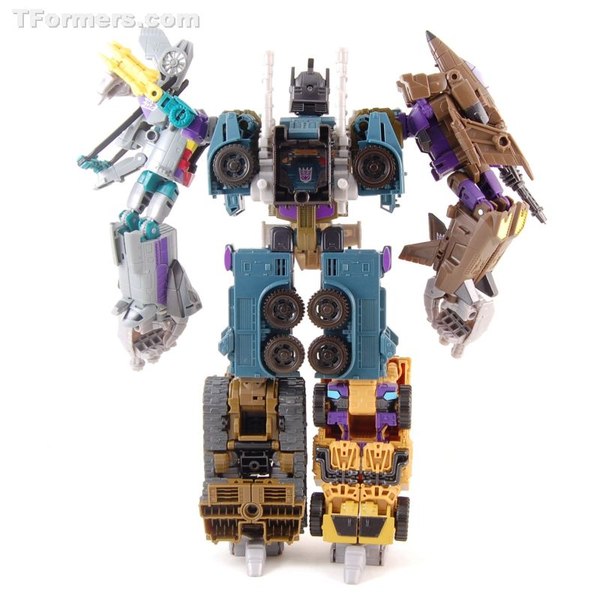 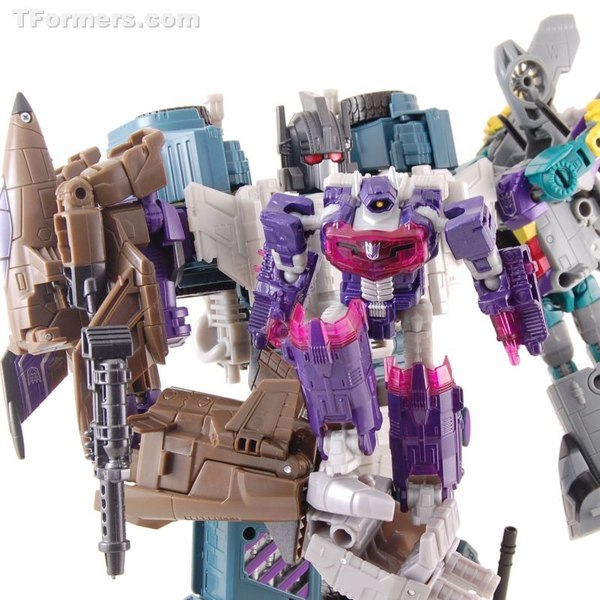 Of course Shockwave works as a gun. To varying degrees. The Blast Off arm is bad at carrying Shockwave because of all the tail fins poking up from the wrist. Vortex is actually really good for this, if you don't mind Bruticus either being left-handed, or swapping arm positions. And I'm afraid that the weight of Shockwave completely overcomes Brawl as an arm, if you wanted to do a full limb swap out. Swindle holds up acceptably though! 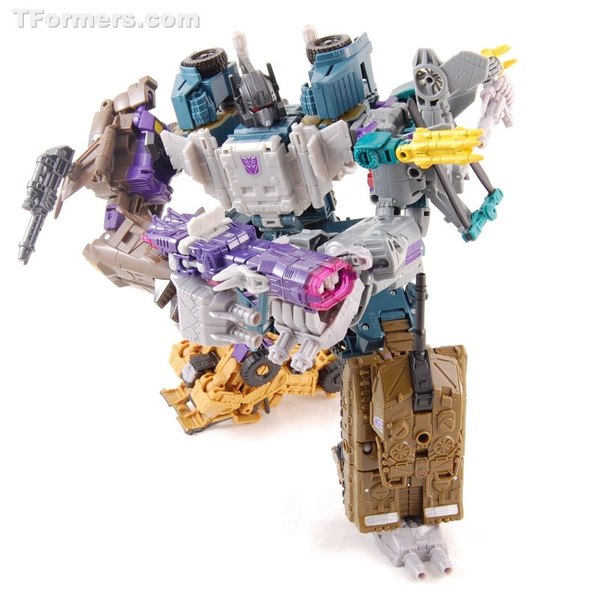 But hilariously, Shockwave's official role is as a jet pack. That's what the Hasbro folks at Botcon called it, anyway. If you watched the Onslaught video, you know the connection to vehicle mode was awful. Thankfully for the options where Shockwave hangs off the back there's a full port made available. 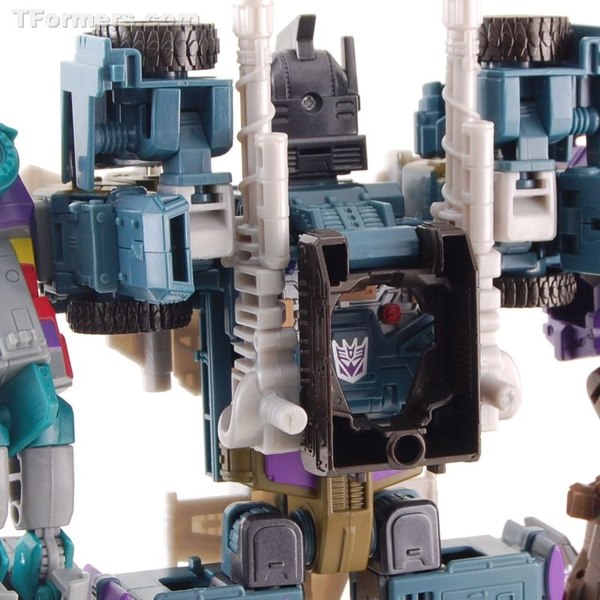 Shockwave holds in there totally fine, which is a relief to me. 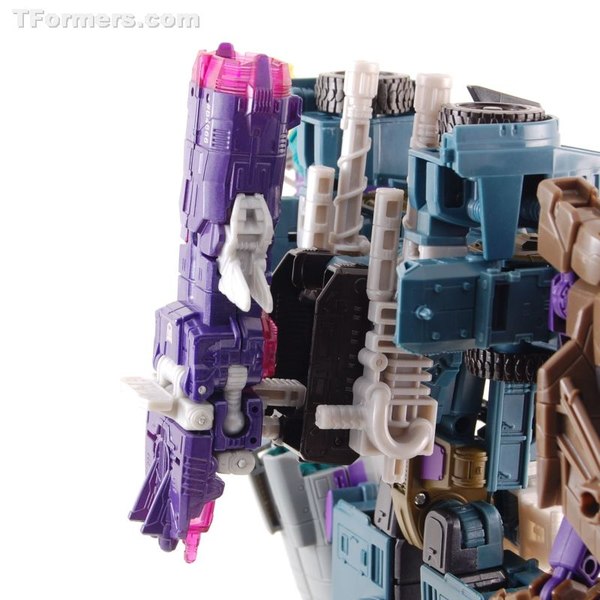 Now, as a jetpack this is stupid, but man, there's such a better role it serves here. The backpack is all hinged, and you might guess where I'm going with this. 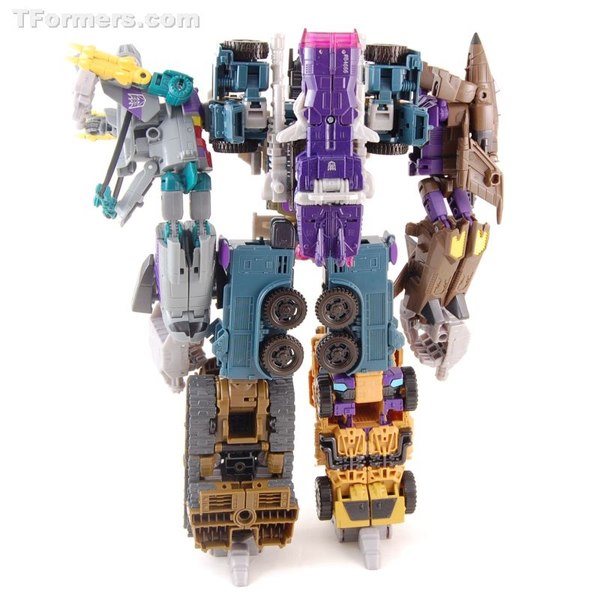 You can lift from the hinge immediately behind the head and have a huge forward-facing cannon rig, which makes Shockwave's placement here seem a lot more reasonable. 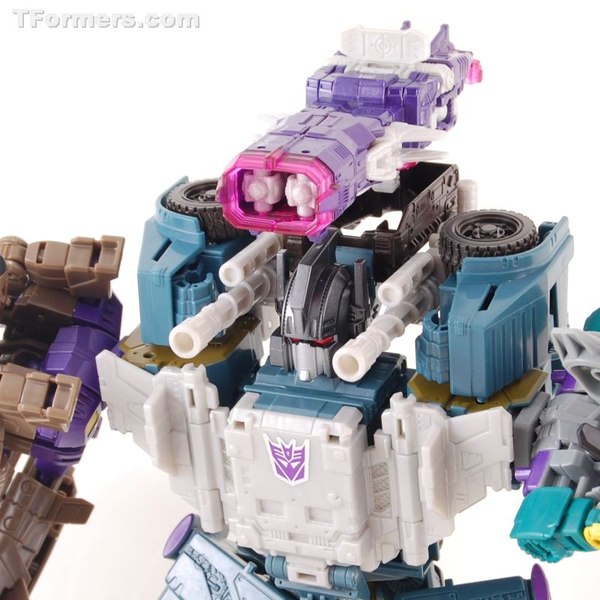 This looks really good without Shockwave there, too. 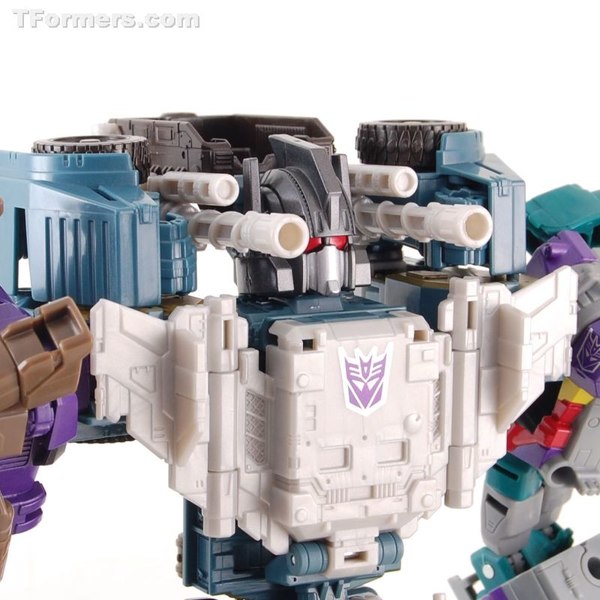 While Sky Reign may eventually prove me wrong, I don't think any torso is ever going to top the Silverbolt mold family for basic functional effectiveness. That being said though, Onslaught makes a really good looking torso, easily the visual equal of Silverbolt and that has a value for me. 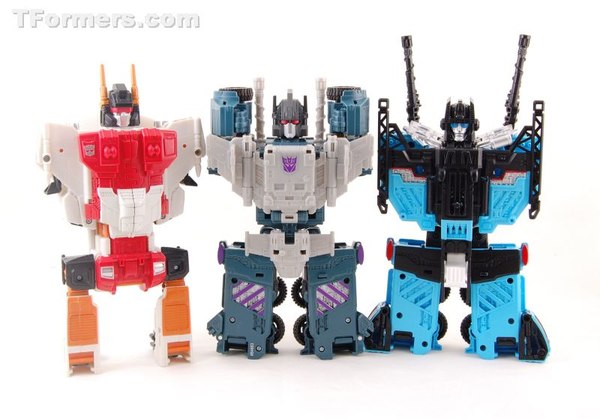 I do regret that in forming Bruticus we had to deal with things like Brawl, a Blast off with an entirely wrong head, and a Vortex I'm afraid I'll break. Onslaught, Swindle and Shockwave are the Combaticon Wave's star performers, and while they can't make the others become better by association, they're a nice bright spot in a mixed result wave. 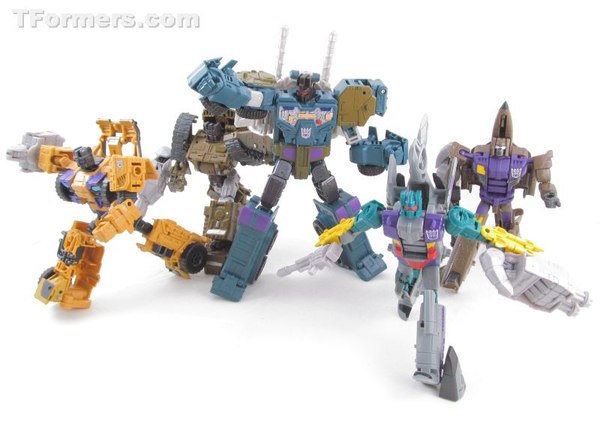 The good news that I take away from this is simply that when arranged in the classic Bruticus combination, everyone involved does a good job and you don't have to address the majority of issues felt by the individual toys. Bruticus is good taken as a whole unit, you'll just have to decide if getting there is worth jumping the hurdles of three of five core team members who don't really measure up to the other two.