The Lost Light is on lockdown. The crazed mnemosurgeon Sunder is on the loose, and the only thing standing between him and his intended victim Skids are a handful of Autobots who intend to stop him - or who, like Tailgate, don't know what's going on... 'Speak, Memory!' Part 2 is written by James Roberts with art by Hayato Sakamoto (coordination by Phase6) and colors by Joana Lafuente. 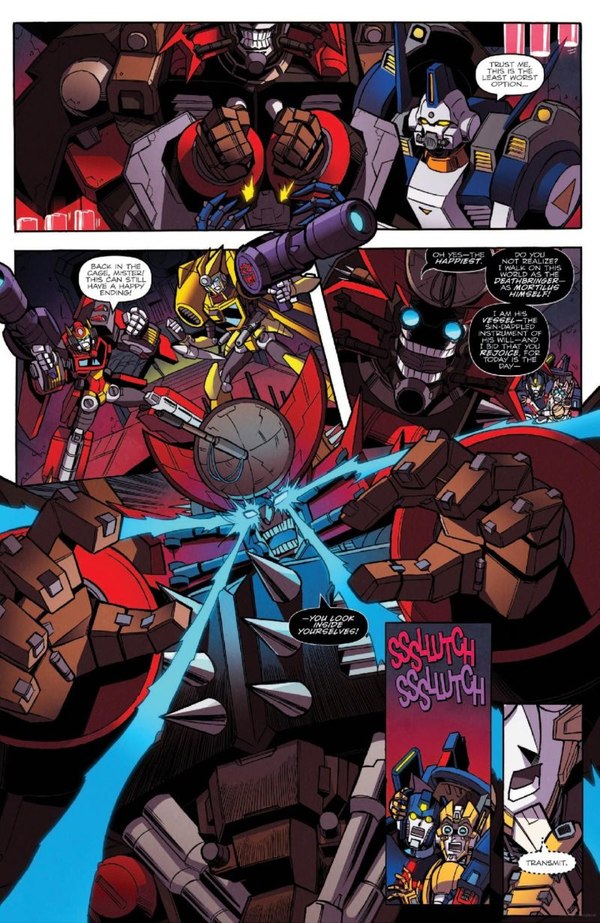 Don't worry, you'll see what happened to them. Or perhaps that should make you worry.

Rung tries to convince Sunder not to force Skids to relive the worst moments of his life as a prisoner in Grindcore, the Decepticon prison camp - but fanatical Sunder is having none of it. Kindle and Fervor try to stop him, but something terrible happens to them off-panel. Later, Tailgate is visiting Getaway in the brig, oblivious to the ship being under lockdown. Luckily he finds Rung and Skids before Sunder finds him - but others have not been so lucky.

Functionally, this issue is a vehicle for demonstrating the amnesiac Skids' history with DJD leader Tarn in the most horrifying way possible, and it works on those terms. Sunder is a decent way to drive that story, though I feel he could have used a bit more fleshing out, and his power of remote mnemosurgery could have been put to better use. The thought had crossed my mind that Sunder's powers could be used to make the other members of the Lost Light crew relive terrible things as well, but the focus is entirely on Skids. Considering the pace at which MTMTE parcels out backstory, it's not surprising we don't get more of it here. Instead we get a new and different use for mnemosurgery and some Cybertronian body horror. (Also, it looks like an upcoming issue of Sins of the Wreckers may address similar themes, so perhaps it's good we don't have both comics exploring similar ground.)

The issue divides its time between the past and present, but the past seems more in focus here. I can understand why, but I still feel as though the present could've benefited from more space. The ending in particular was set up earlier in this issue and in fact several issues ago, but still to a degree feels a bit convenient. That's a thread that runs through this issue: you can clearly see the elements falling into place to set up the big story planned to begin with issue #50. The pieces of the individual stories have historically worked to serve the larger story in this series, but this time I feel as though building for the future is happening at the expense of the now.

Hayato Sakamoto returns this issue, and while it's a name you might be more inclined to associate with cuteness from his work on the TakaraTomy Legends comics (and DJD medic Nickel), he does an excellent job with both the past and present horrors in this issue. There's also one scene - and I'd love to know if James Roberts intended this - that draws unexpected parallels between this Megatron and the Megatron of Transformers: The Movie, and serves to show exactly how different this version of Megatron is, or at least wants to be. And as always, Joana Lafuente's colors are excellent, and the dark subject matter is treated with dark colors. But it's a warm darkness, not at all detached from the horror of the situation(s). And wisely, Lafuente doesn't change that treatment between the flashbacks and the present day - the memories are intruding on the present, and are just as solid and real, and the lack of a "flashback" palette of some sort helps sell that.

Three covers. The first, by Alex Milne and Josh Perez, shows Tailgate protecting a cowering Thunderclash(!). This is the usual kind of embellishing of events from the issue, but in a way I wish that scene had actually happened as shown. The second by Nick Roche and Josh Burcham shows Rung standing alone in what I believe to be Froid's shadow - which is thematically appropriate for the issue. Last is another Milne/Perez work, part of a larger cast portrait which began last issue and continues at least through the next. It's hard to judge those on their own, but I bet it'll make a nice poster when it's done!

Next up is the first part of The Dying Of The Light, which is a title that should probably not be taken fully literally. We've been leading up to the Lost Light's confrontation with the DJD all season, and it looks like it may begin soon. Roberts has said that the plan is for Issue #50 to be released by month's end, so hopefully we won't be waiting for long.