Within the heart of Cybertron, Duke and the Autobots race out of the collapsing Primus chamber! All seems lost, but a familiar bereted figure jumps in to save the day... and probably not the one you expect. "Escape From Primus" is written by Tom Scioli and John Barber with art, colors, and lettering by Scioli. 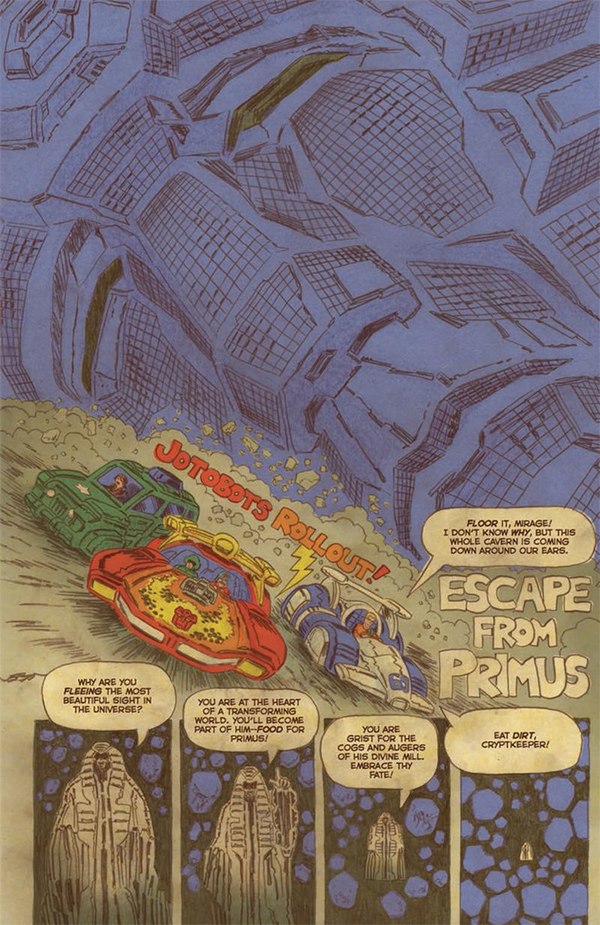 That face is so wonderfully rendered.

The Autobots tear out of the Primus chamber as it shifts and collapses around them. Mirage is trapped under the rubble... but Duke won't leave a man behind. It looks like the pair won't make it, but then a figure leaps from Metroplex above to save them, suspended by a rope: Duke's younger brother, Falcon. And thereby hangs a tale...

While bookended by scenes on Cybertron, this may be the first issue to have this much of a focus on the GI Joe side of things. The tale of Duke and Falcon is steeped in `80s military and tough-guy coming-of-age stories... which, along with GI Joe, are not my bag so much as Transformers is. But it's material Tom Scioli clearly knows and is presenting with his usual unique flair.

You can sum up this issue as "Duke was extra-tough on his half-brother to make sure he was as good a GI Joe as he could be, and Falcon earned his respect." But of course, the secret to any Scioli tale is in the telling. That's rendered as well as anything he's ever done, though my personal bias leads me to love the shots of Primus at the beginning of the comic most of all. But there are touches both small and large here that are great: Duke's drill-sergeant monologue in white on the blue part of an American flag; Duke referring to Falcon as "Little Mac" at one point when Falcon is wearing the Punch-Out!! star's exact colors; the "BOOM" and "ZAP" markers on the Transformer-themed obstacle course; and lastly the smaller flashbacks within the greater flashback being monochrome so you can better tell them apart. Even when more grounded, human things are happening, there's a dozen little touches and neat artistic choices to see.

There's no text piece this time, but the commentary/conversation between Barber and Scioli returns! Much to the book's benefit, too: some of the GI Joe references being made and scenes being riffed on would've gone right above my robot-loving head if not for these pages. For a book like this I feel like those pages are practically essential anymore. I hope that perhaps they'll consider going back and doing one of those for issue #10 when it goes to collection.

Two covers this month. Scioli's is a simple one of Duke grasping a snake that coils around his arm, with Hot Rod in the background. The other cover, by Tom Neely and Marc J. Palm, shows the Dreadnoks under attack by a really nifty take on Wreck-Gar. It's a nice image, one in a style you're not going to see in other official Transformers art, which is to me one of the great charms of TF v. Joe's alternate covers. I do wish the book itself had the usual credits for alternate covers - I had to do some digging to figure out who "Tom N." was.

It's not fair to say the blurb for next issue suggests that we get "back on track," because we haven't been off-track, not really. I'm not even sure there is a track as such. But the next issue looks as though it's going to be more focused on the Transformers side of things again, and that is definitely not unwelcome.