Once, anything connected to the Generation 2 Stunticons was the sole domain of Botcon. The only original G2 Stunticon to be released was Breakdown in 1994, in small numbers at the first Botcon. Many years later, an updated version of the character was part of another exclusive set. And such was the order of things. But 2016 is an amazing year, and as part of that, Generation 2 Breakdown has broken free of the dominion of Botcon, and has also brought the rest of the team with him in a great Combiner Wars box set!

Now, Breakdown is not a perfect emulation of the deco of the original. Notably all the graphics on the roof are absent. So too is the Breakdown nametag that would have been on the passenger side door. The confluence of panels coming together in Generations Breakdown would make that really impractical though. 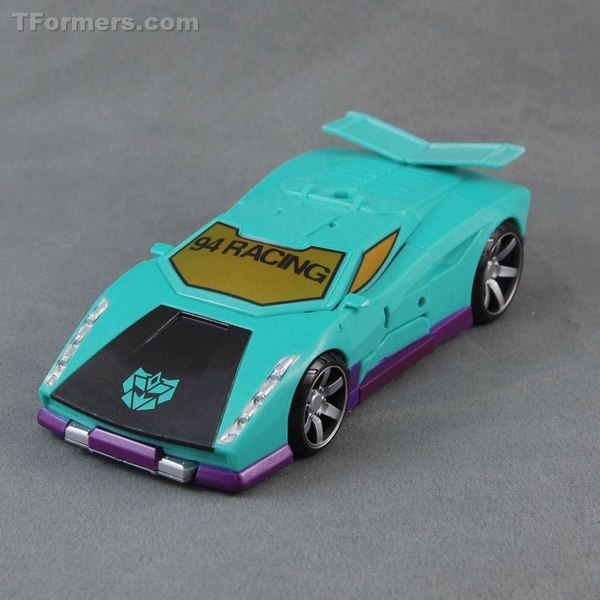 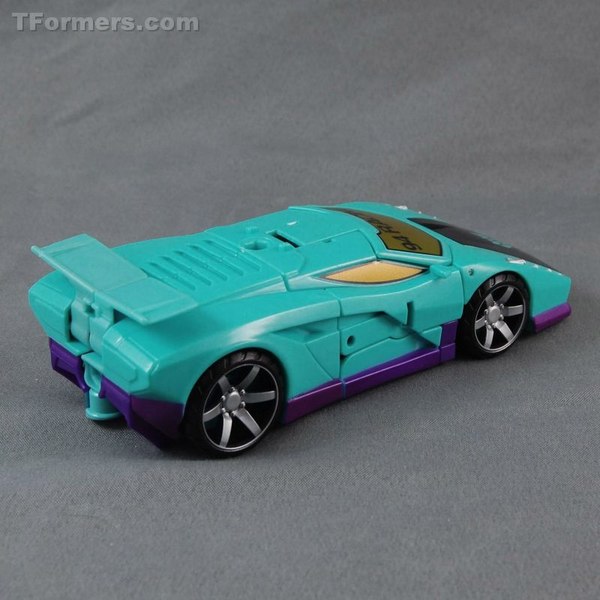 In place of those things, the windshield text now reads 94 RACING as a nod to the year the toy was sold. 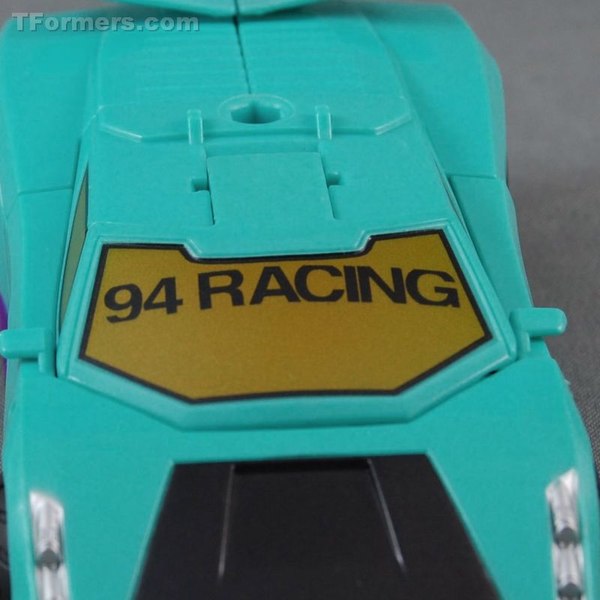 The other meaningful change is that - at least going by photos - the purple on Generations Breakdown is darker than the original. You lose a bit of the fluorescent quality of G2, but the purple and turquoise play well together even lacking that little bit of eye searing vibrance. 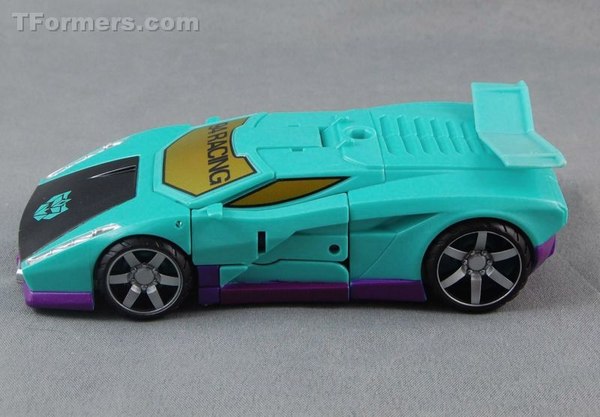 There's a pretty much equal amount of paint coverage to the G1 colors Breakdown. The major difference is the G2 insignia being a simpler pattern without the extra border layer. 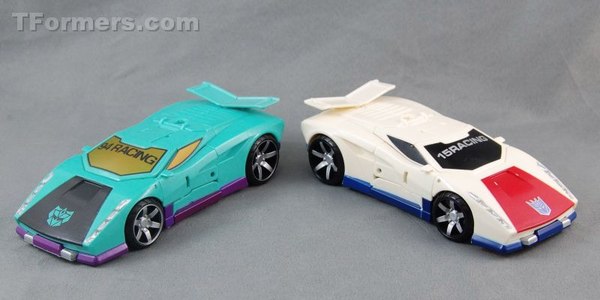 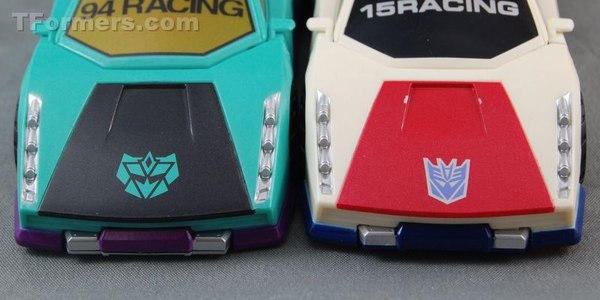 The only place with a little paint weirdness is back here with the second combiner hand port, where about two thirds is painted turquoise, seemingly only to match the port this takes the place of. It's really pointless, and seen from this angle looks very off where it cuts to purple plastic. 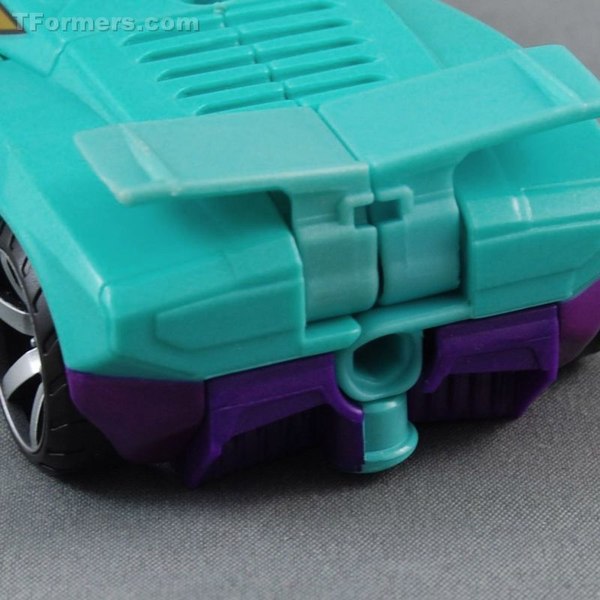 To my delight, I found that the colors of the vehicle mode can be enhanced significantly by attaching the combiner hand/foot part to the roof. The cyan represented both in plastic and paint sets off the turquoise very strongly and enhances the whole deco a lot. 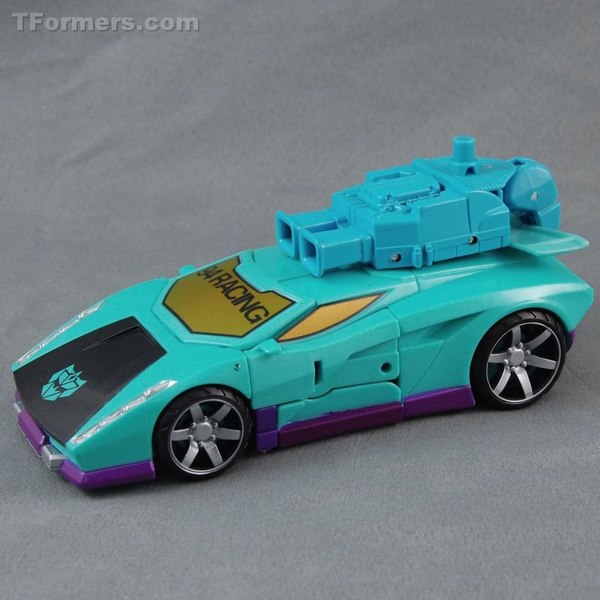 Skipping up to robot mode, here we find Breakdown to diverge a bit more from the original, by necessity of mold layouts. Breakdown should have a lot of purple on the arms, but that could only be done here with paint work. And as it was with vehicle mode, there's not really any meaningful divergence in paint coverage between versions. 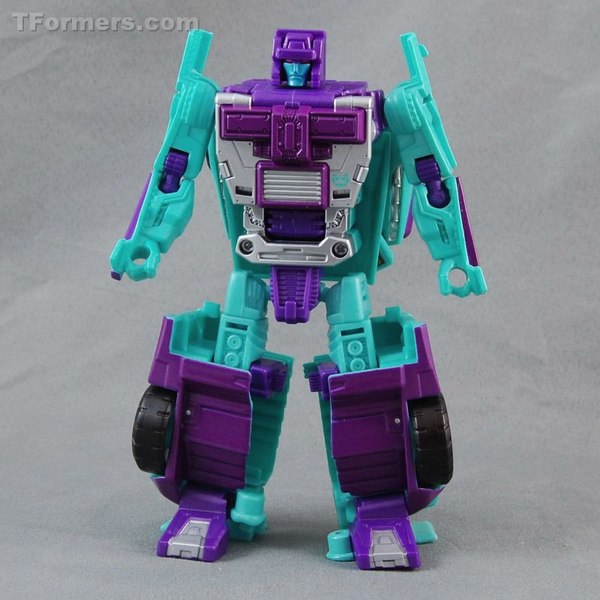 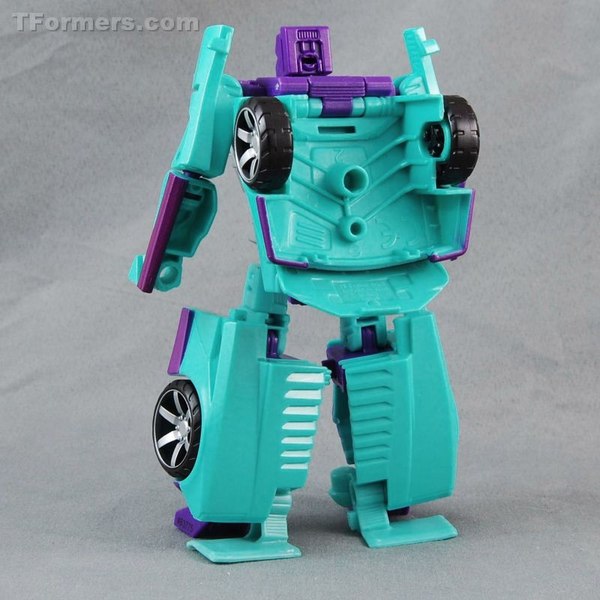 The chest oddly does get more, seemingly because the piece was paint dipped or fully sprayed and then had the needed purple reapplied after. The original simply painted around the areas to be left blue. At the same time, the original's chest was kind of a bronze color, so the silver use is wrong to start. 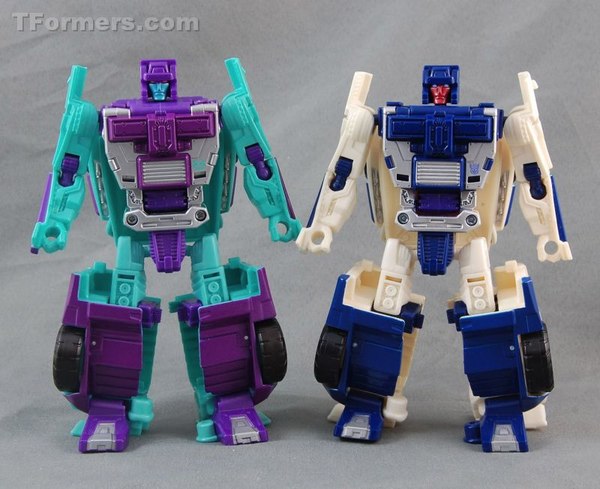 I'm sure perceptions will differ, but I've always thought of G2 Breakdown as a purple robot, but this one reads more as a turquoise robot since all the purple is largely pushed out to the edges. That being said, the little G2 Decepticon insignia in turquoise over the silver paint looks fantastic. It is I think the only turquoise paint, and it has that fluorescent vibrance the plastic is lacking. 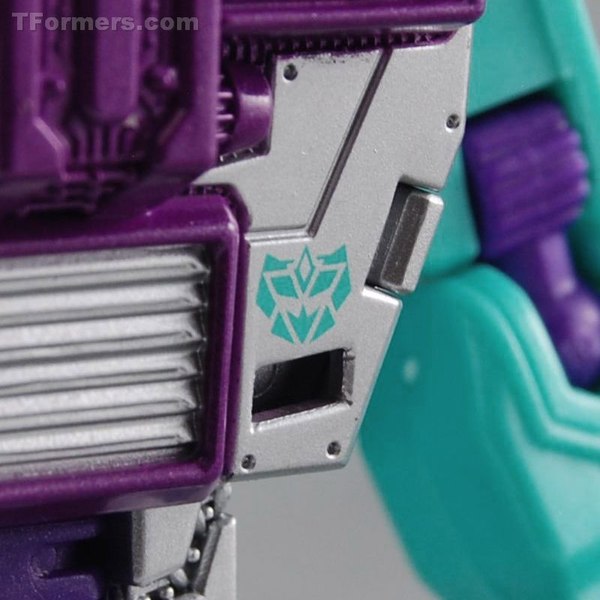 The robot is not bad looking at all, it's simply a little bit off if you were a expecting a very accurate representation of the original deco.

The general parts fit and tolerances are good. At least as good or better than the original in most respects. The joints have a good stiffness without being hard to work. And the leg joints are thankfully not so tight that they easily overcome the hinged hip stems. 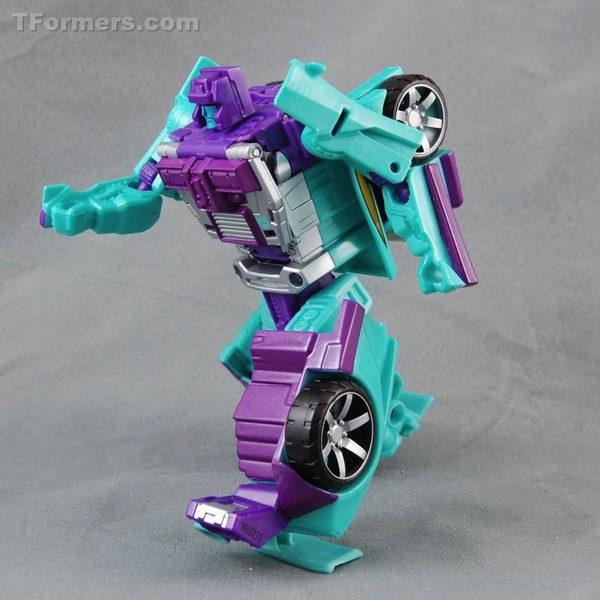 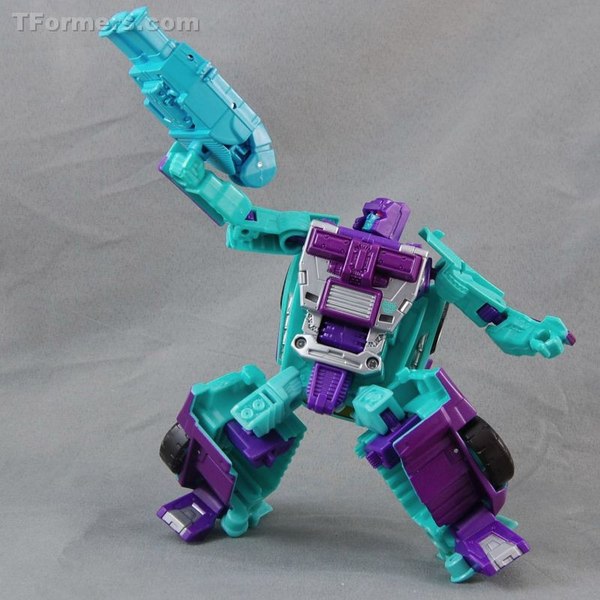 The vehicle mode likewise fits together well, though on mine one door panel won't quite rest flush. I noticed a higher than typical amount of mold flash in general on Breakdown, so the tab or slot holding the robot arm in as the door may need cleaned up or trimmed slightly. It's a very small issue though. 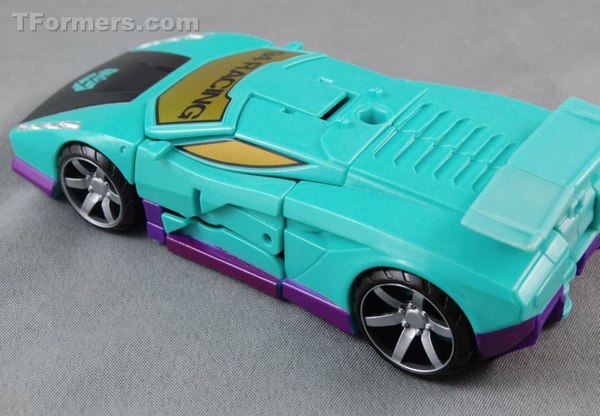 Breakdown's sword gun thing is completely painted over. It seems to be on the sprue with the wheels, so it's always gonna be black plastic. The non-blade parts are painted in magenta, and it looks nice. 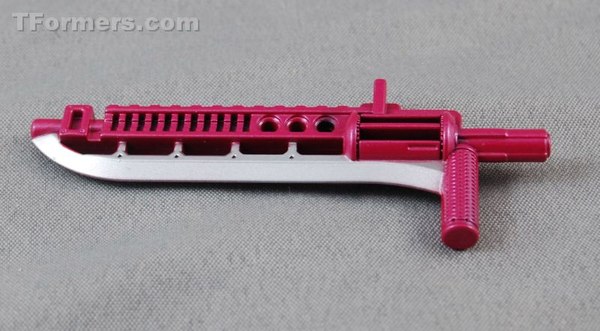 Unfortunately the handles are now thickened a bit, and they don't fit very comfortably. 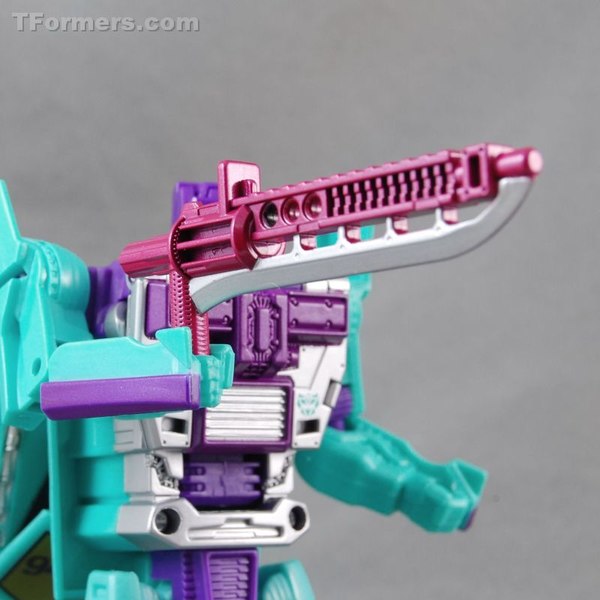 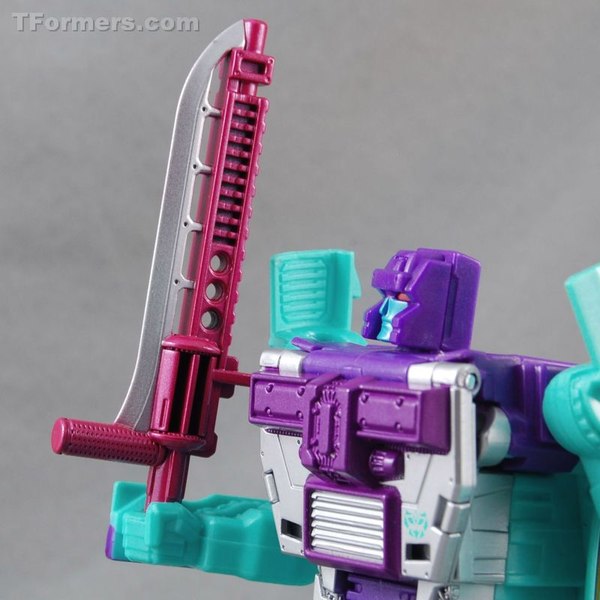 It also presents a problem in vehicle mode, as the mounting tab is also a bit too wide for the slot you'd normally attach it to. It'll wedge in, but it tries to push back out, and you can just feel that it's wrong. If you don't mind the underlying color peeking through, you might even want to scrape the paint off that tab at least.

Coming down to emulating the original deco, no question Botcon did it better. But they had different resources. And even so that was not able to combine with anything. I'm pretty willing to accept some deco compromises on a Breakdown that's actually made to form a full G2 Menasor. Breakdown's vehicle mode is almost perfect at recreating the look of the original toy, and while I think the robot could use some tweaks to bring it a little closer, it still looks good in that Generation 2 style and is a good way to start off with this set. But Breakdown is the only one of these toys whose decos have seen actual release of any kind, which means from here on, we're in practically all new territory. This is gonna be fun! 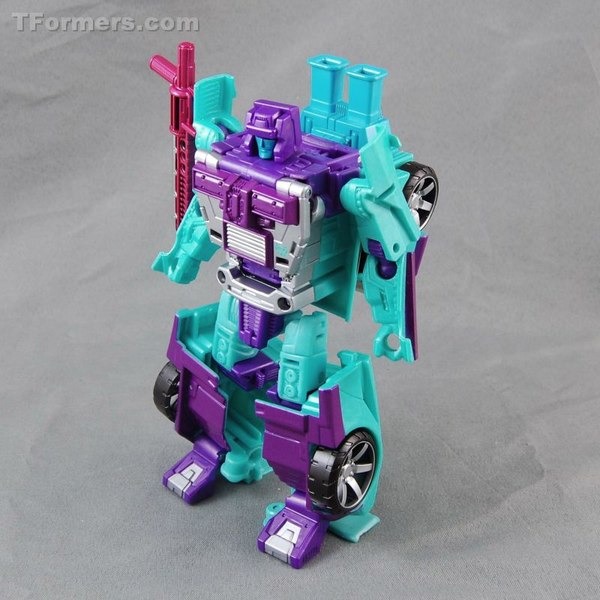