Besides bringing the glorious unproduced Generation 2 colors of the Stunticons to fans and collectors for the first time, this box set offers another small benefit. If you missed out on Brake-Neck, AKA Wildrider when the normal colors version was released, this is your chance to pick up a copy of this car body with that head sculpt.

Brake-Neck is nice, bright yellow. The body color has a very slight translucence and swirl which may or may not present on camera. It's a choice of plastic that I've praised on the past for doing a good job at mimicking a high gloss car paint job. While it's a little less effective in yellow, it gives an illusion of depth to the finish. 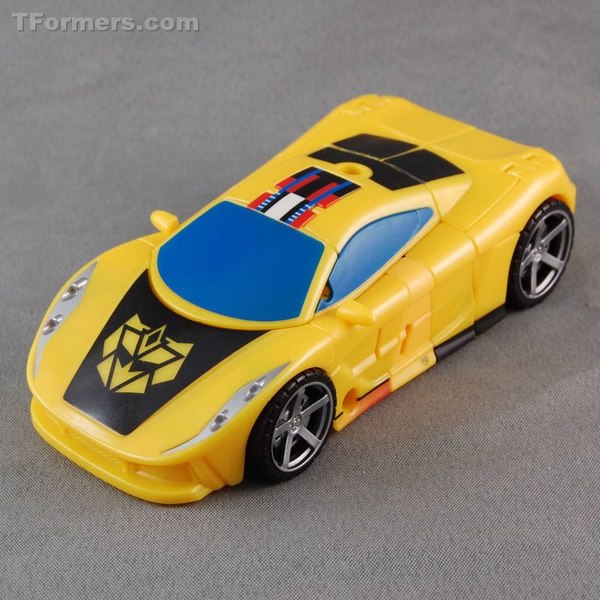 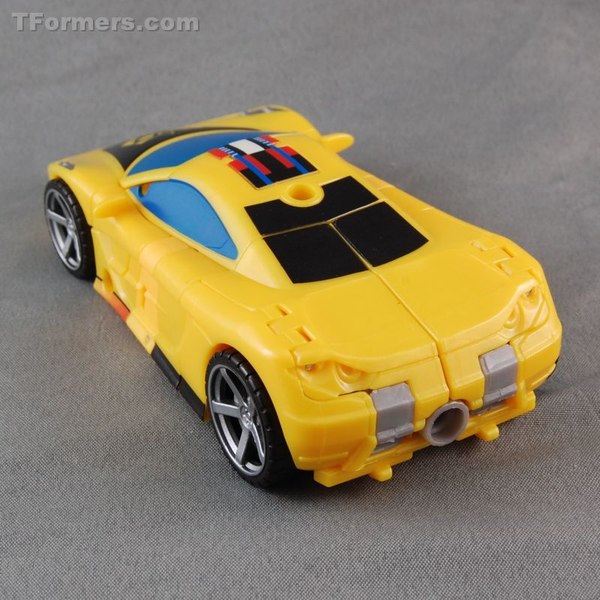 It does work against the toy a little bit in some places. Yellow is a finicky color, and so in places where you have darker colors, the surrounding area discolors a little because of the translucence. The wheel wells show this pretty well, at least in person if not so prominently on camera. It's not hugely hurtful to the look of the car, but you probably will notice it at some point or another. 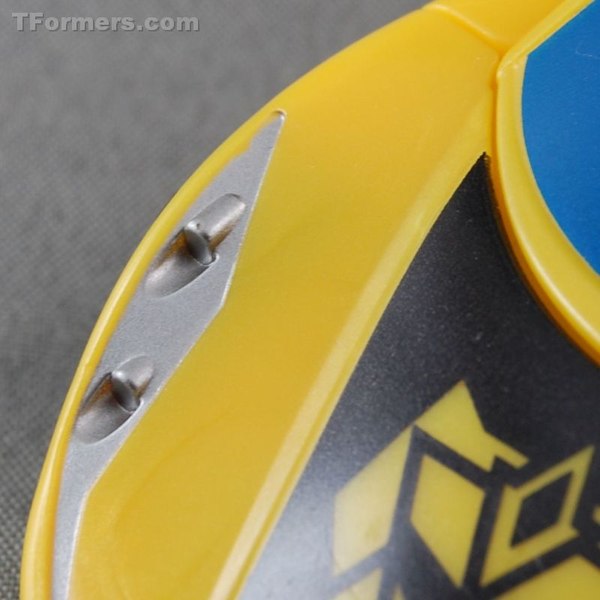 Brake-Neck has a good deco overall, focusing mostly on balancing yellow and black. The hood panel with negative-space G2 Decepticon insignia is really striking in particular. 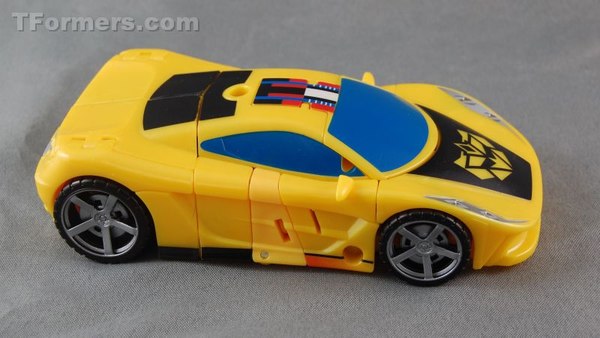 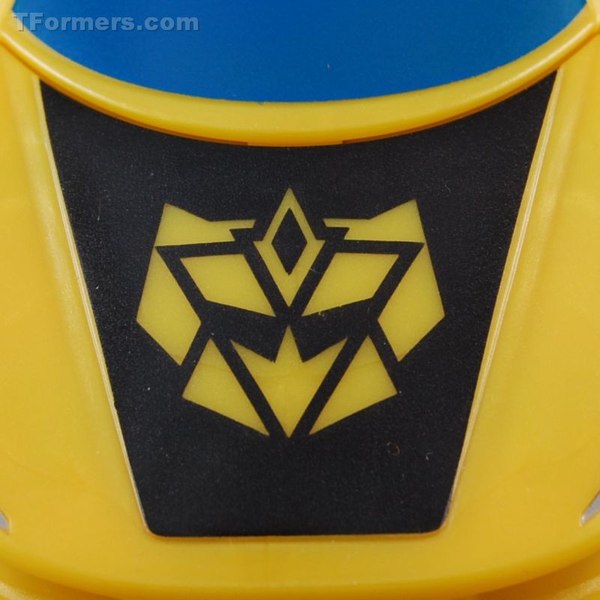 The blue windows also work well with the yellow body. Brake-Neck gets an extra versus the G1 colors version in having the back window painted in, but... why is it black when the other windows are blue? 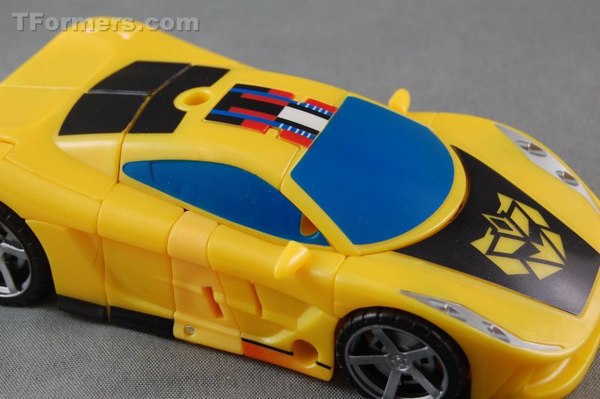 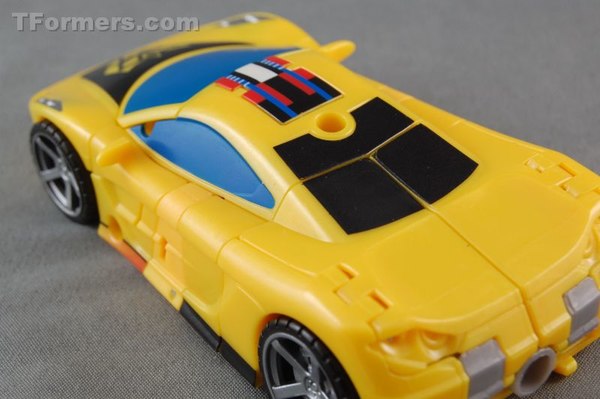 We also have some sticker-like detail tampographed on in the middle of the roof, outlined by the transformation panel separations. It's a very clean and well-done application, though it doesn't exactly mesh with the rest of the car at all. 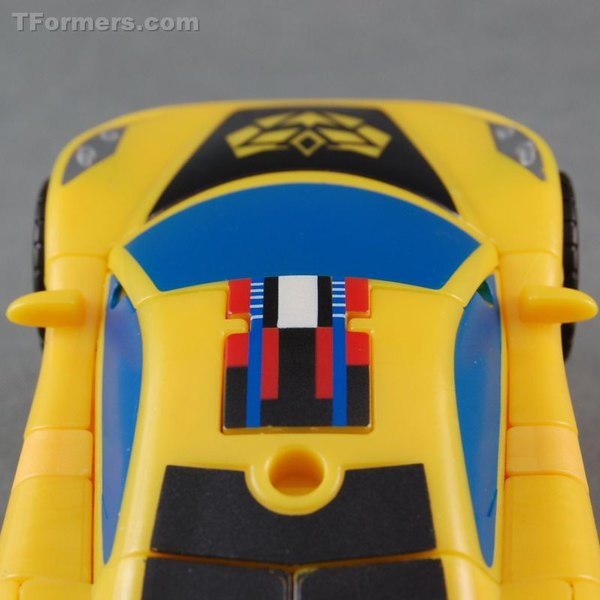 Brake-Neck almost manages to escape from the curse of this mold, with the unpaintable plastic in the mid-door interrupting any kind of deco. It's one of the less prominent cases, but it's still plain something is missing. Shame too, if this was meant to transition from light yellow-orange all the way to black in that gap, it would have been cool looking. 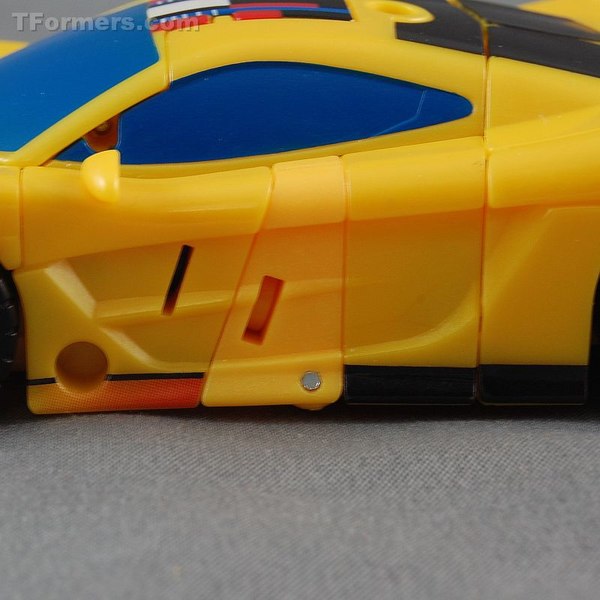 Of course even setting aside the paint, that mid-panel chunk is perceptibly a different shade, although not too far off. It might not even stand out if it had the same translucent sheen as the surrounding material. 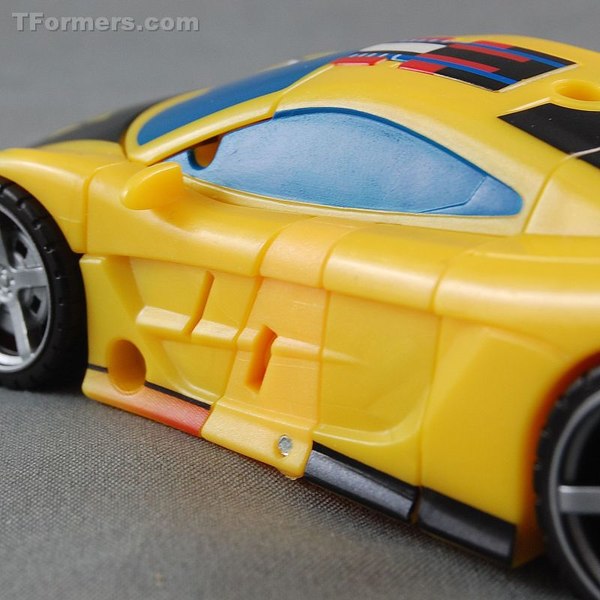 The mold shows generally good parts fit. The only exception is in back where there's a pretty noticeable gap between the panels that you can't get rid of. 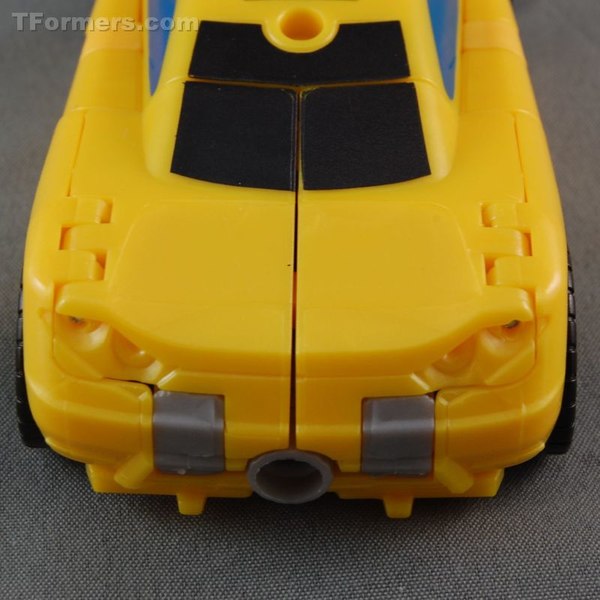 Not everything fits perfectly though. The mold has always experienced some issues with its accessories and the 5mm ports, and this is not different. The combiner extremity is very difficult to fit in the roof port, so much that I don't feel comfortable attaching it. Not really relevant to the vehicle mode, but I'll go ahead and note that attaching this to the combiner port is equally difficult. It seems like the hand/foot part itself is the problem since two ports of different materials on the figure act basically the same when trying to attach it.

The exhaust club is a nice, smooth fit to the side panel ports, though. That's nice at least! 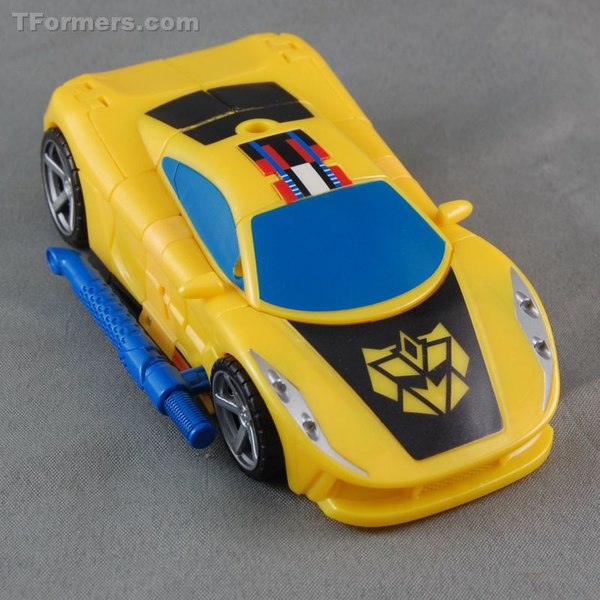 Flipping over to robot mode, this is probably the best feeling version of this mold I've gotten to handle so far. 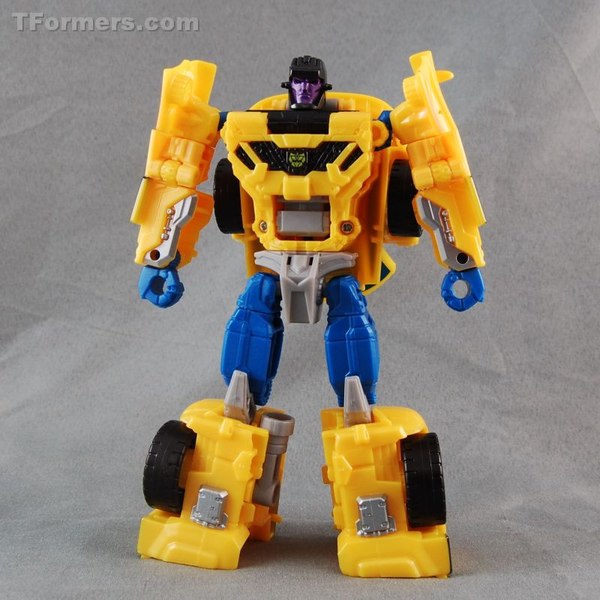 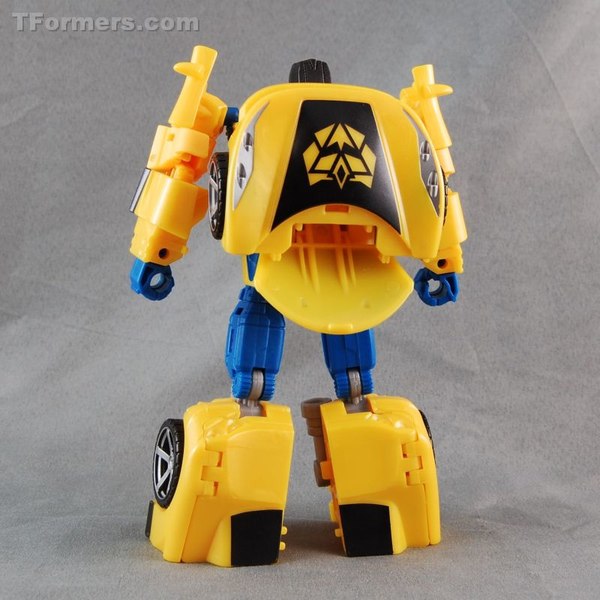 The ball joint tension at the shoulders and hips is smooth but strong, the elbow hinges are solid and fell like they'll bear a lot of weight, and the knees are very smooth moving. If anything, they're what feel like the weak link to me, and that's only because they have to potentially bear weight as part of a combiner's elbow joint. For the figure individually they're totally fine. Oh, and of course the various swivel joints all share a similar level of stiffness without resisting movement. 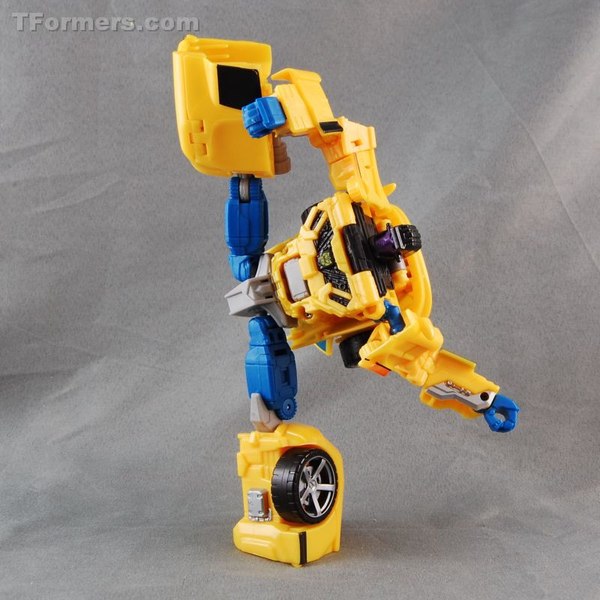 Now, those wrist hinges? With the dumb ratcheting that never made any sense? Yeah, they're still here and have never been harder to move. Hoping that relaxes a little with additional transformation cycles, but it's a pain right now.

Brake-Neck has a less glossy paint on the face, which I feel like helps bring out the sculpt better. Plus I dig the combination of black helmet and purple "skin". What's really cool though, from most angles in most situations, the eyes fall in to shadow. 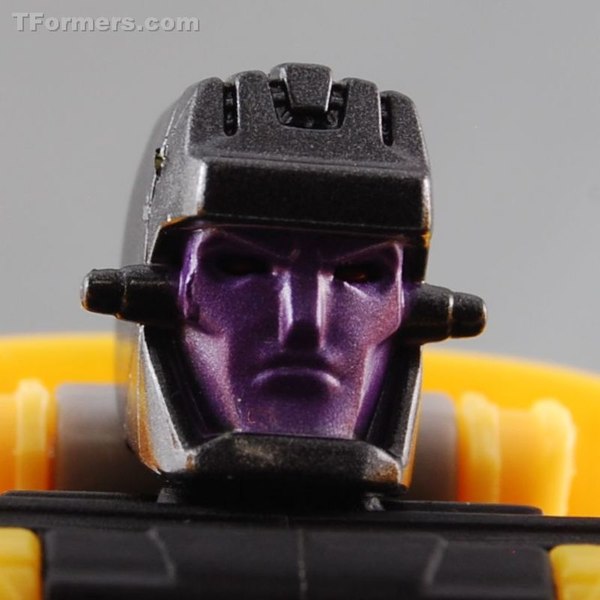 Despite being painted bright red, often they look black and dead, and only when you're at just the right angle do you get a sudden spark of red. It's a really cool effect that was probably in no way intentional. 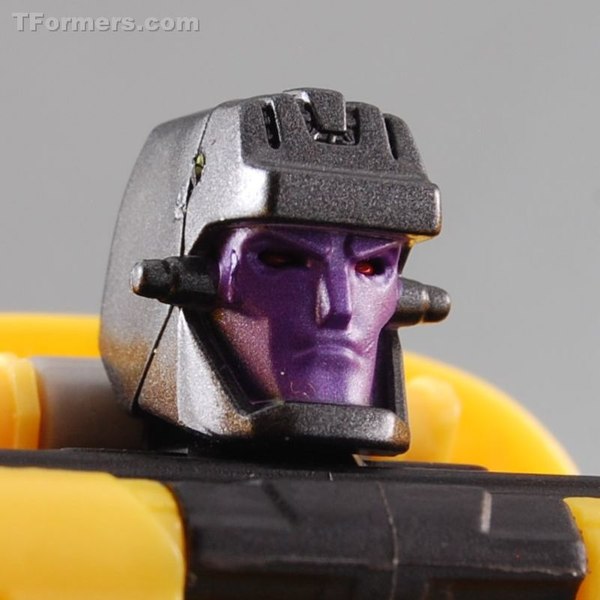 There's a little less color variation here versus the G1 colors, at least as goes the upper body. The arms lose a paint app each, and then since the unpaintable plastic segment is also yellow, that's another stage of color separation gone. 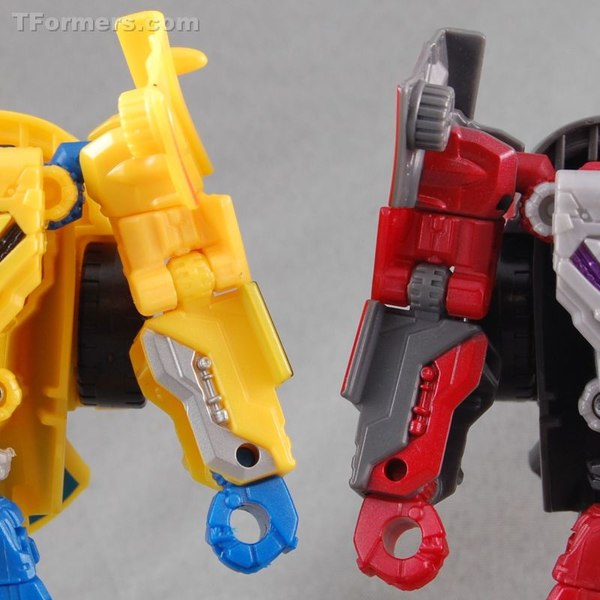 How much that matters is up to your own preferences. It works fine for me since the arms look pretty well cohesive as-is and there's not any other deco losses on the robot. 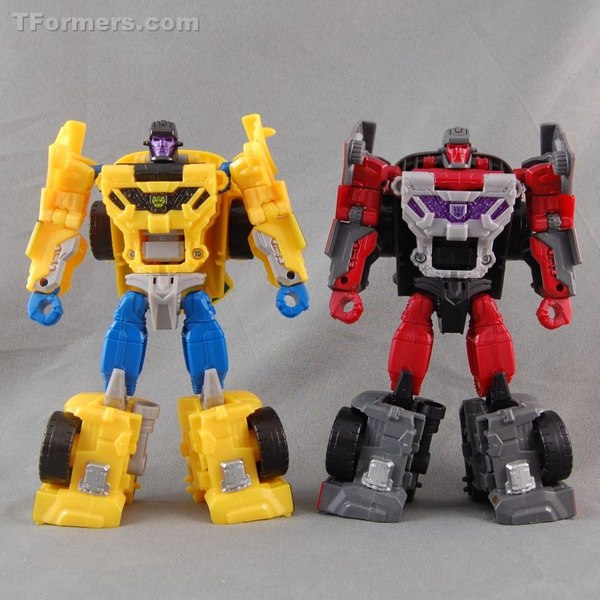 We get back to yellow being a pain to work with as we look at the G2 Decepticon insignia, painted yellow over black. That never turns out well, and I really wish they'd gone with a blue similar to the fists and thighs instead. 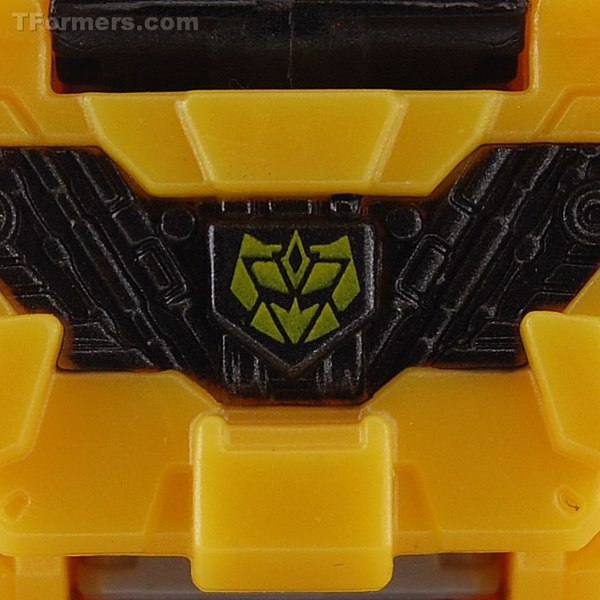 But the color layout overall is really nice looking. Granted, blue and yellow, and yellow and black are very standard combinations, so it shouldn't be a surprise that the robot looks really nice using all three.

Now, like Breakdown's weapon, the exhaust pipe beating stick is entirely painted, in a really pretty shade of blue that I think is trying to match the thighs. I don't really care what it's going for, I just really dig this specific blue. 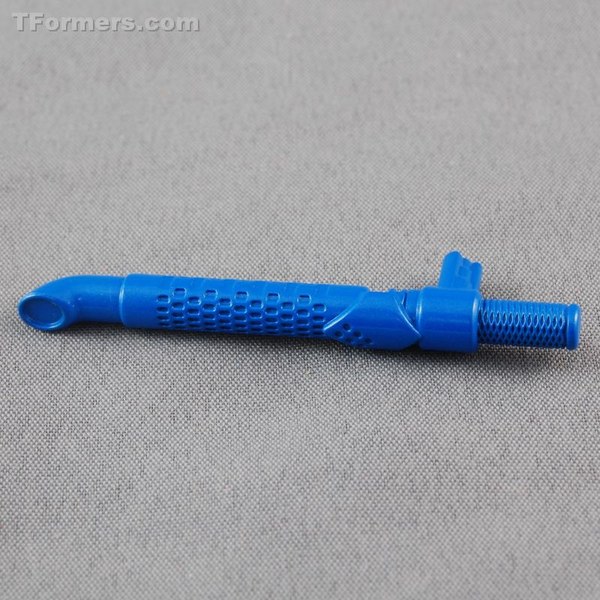 I already noted it fits snugly in the 5mm ports on the body, and it's a good fit in the hands, though it will resist just a little bit at first before fitting more easily the rest of the way in. 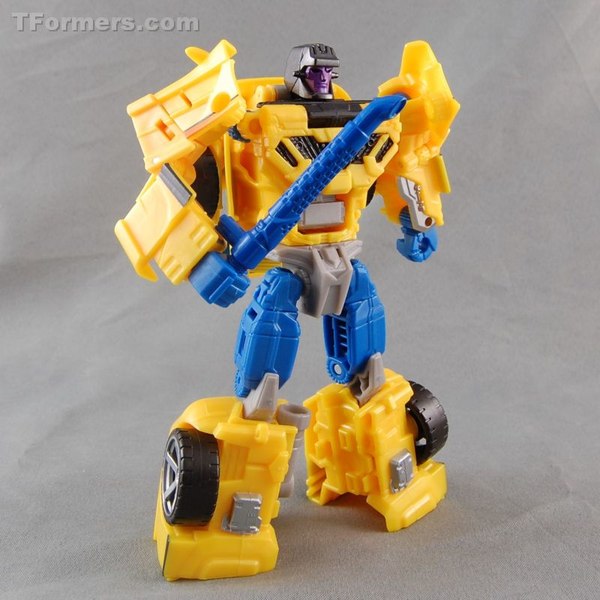 Sadly, if you want to use it under-hand like a tonfa, it's still loose and needs to be braced up. 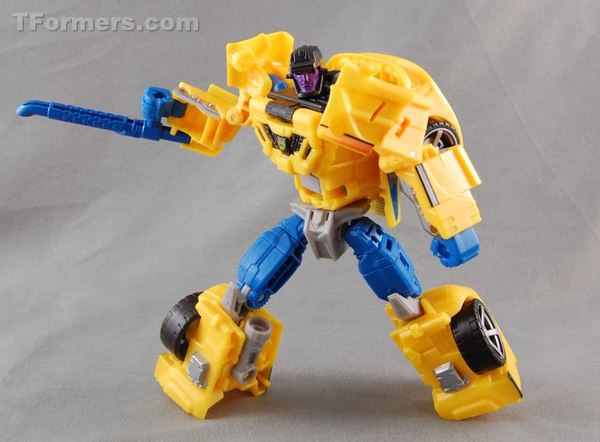 And if you want somewhere to go with the hand/foot part, it will peg very solidly in the shoulders. 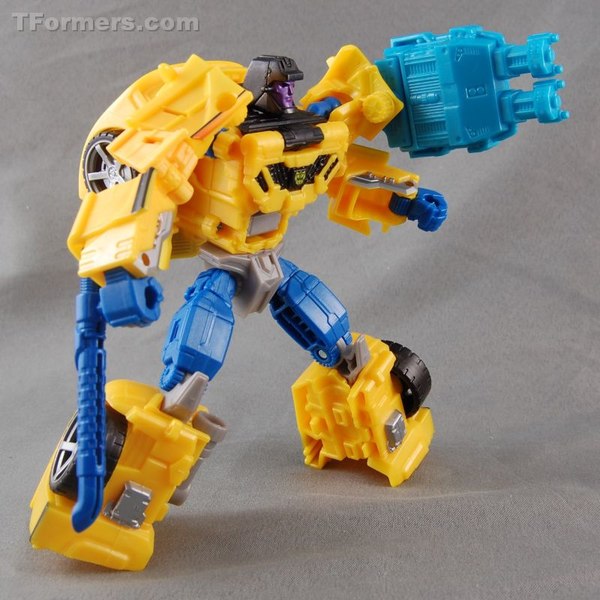 If you missed the first go at Brake-Neck/Wildrider, this is a good chance to pick up this variation of the mold family. And even beyond that benefit, this feels significantly better than the G1 colors Brake-Neck I got last year. And whether or not you have any specific interest or attachment to the G2 colors, the deco is just simply attractive on its own merits. It's a stronger showing than Breakdown, and has no drawbacks of meaningful note to offset its positives. The more I dig in to this set, the happier it's making me. Can this possibly continue for the entire team? I guess we'll find out next time...!