Of course, Generation 2 wasn't all bright, wacky colors. Sometimes things turned out quite subdued and tasteful. The planned original G2 Drag Strip was, well, kind of boring looking honestly. But for Combiner Wars, we get something much more interesting looking that stays true to the spirit of the original deco.

At first glance, Drag Strip kind of comes off as boring. 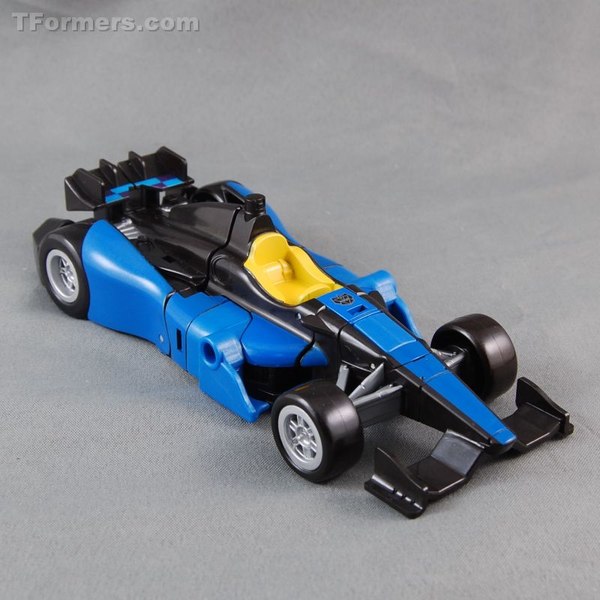 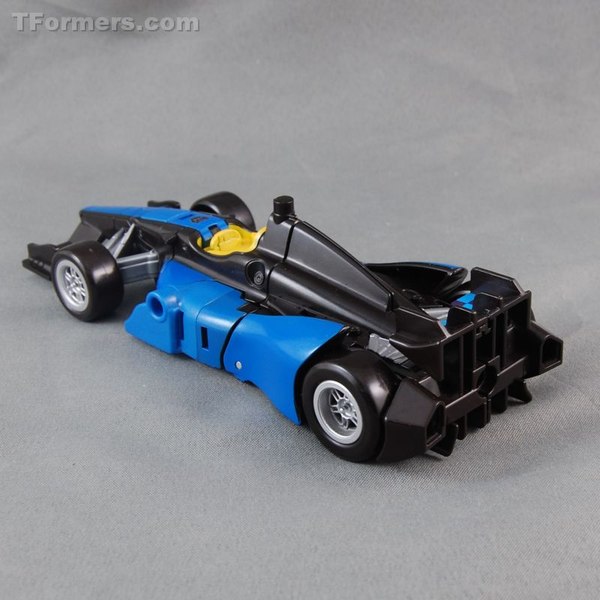 It's a problem of being part of such an otherwise vibrantly colored set of toys, everything else almost literally outshines it. But even as a darker colorscheme among bright toys, it has its way of standing out. 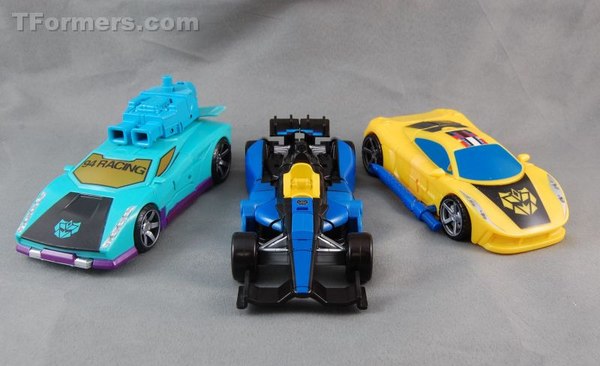 It's hard to look at this and not want to interpret it as some kind of stealth colors. Another take might be Drag Strip at night, even though colors don't actually work that way.

But rather than being just the black racecar the original would have been, Drag Strip is now balanced between black and a rich, slightly dark blue in almost equal amounts. This serves two things. First it brings Drag Strip more in line with the rest of the team by presenting a strong, reasonably saturated color like everyone else has. And otherwise it relieves us of the boredom of having the toy stay 90% black.

And another splash of bright color is added with the yellow driver compartment. Basically, they took the most boring deco from the original G2 Stunticons and made it one of the most conventionally interesting ones in this set. 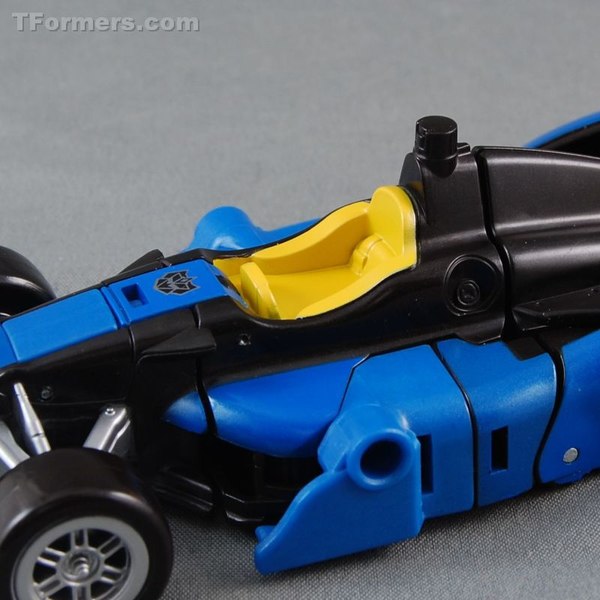 The spoiler has sticker detail recreated. The purple kind of fades in with the black plastic, a brighter shade would have worked a little better for contrast. 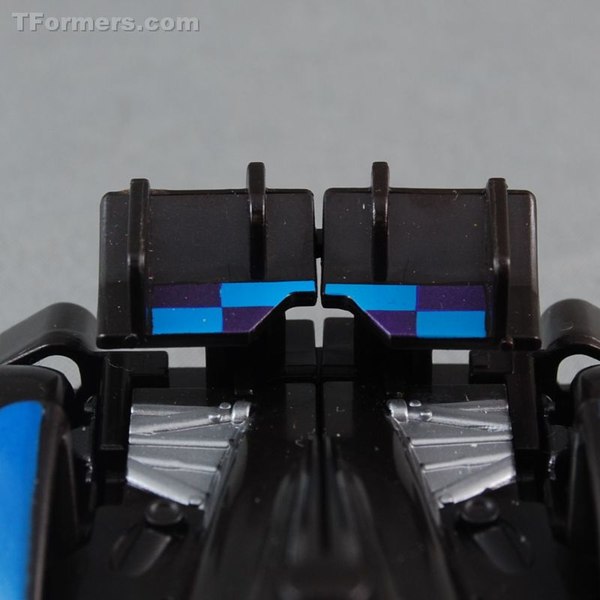 And Drag Strip has my favorite G2 insignia so far, with the really nice black, silver-edged example. 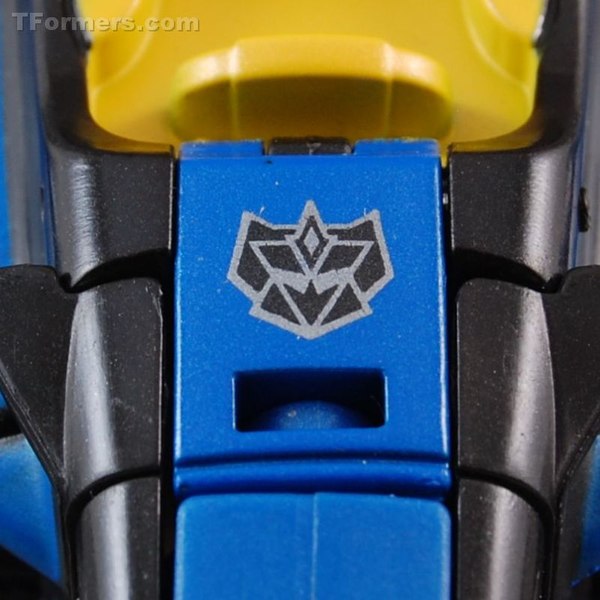 Drag Strip is sadly not quite as good for parts fit as the last two figures. The back half has a pretty big gap, relatively speaking, and it won't close up any farther. 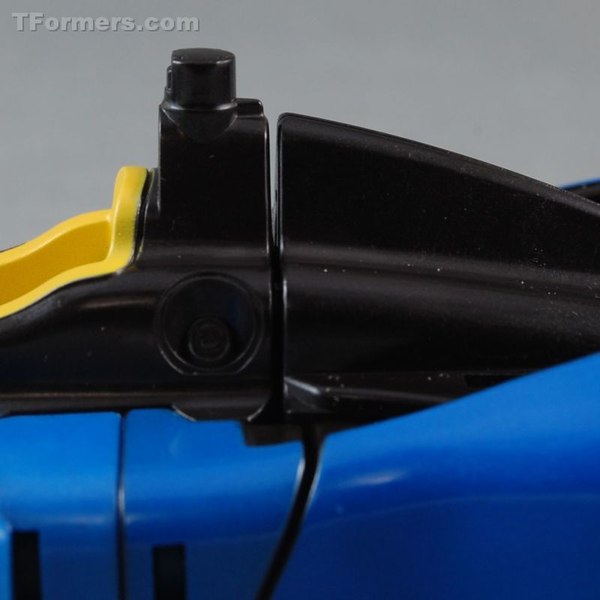 I'm also finding it hard to get the front end to stay down all the way. 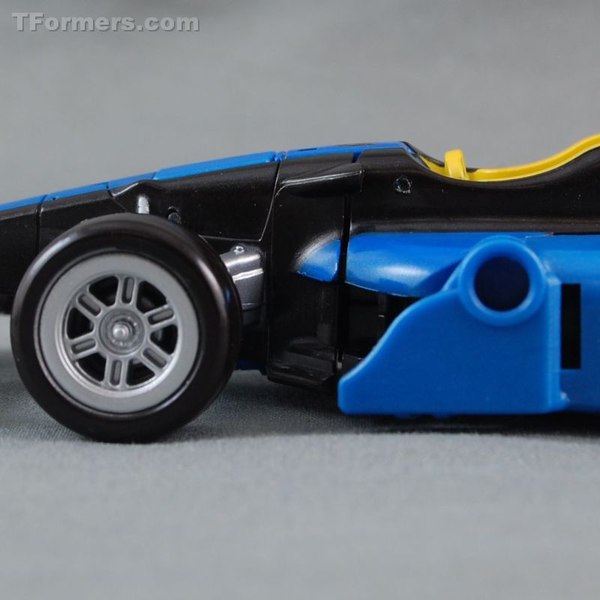 The side panels and spoiler do much better at staying where they're supposed to and holding solidly.

When you put the combiner part on the vehicle, it hiding much of the remaining black really further pushes the change of color identity for the vehicle. Though as much as I do like that cyan color these parts have been cast in, it doesn't really mesh well with the blue on the figure, so I'm not really inclined to make use of this. 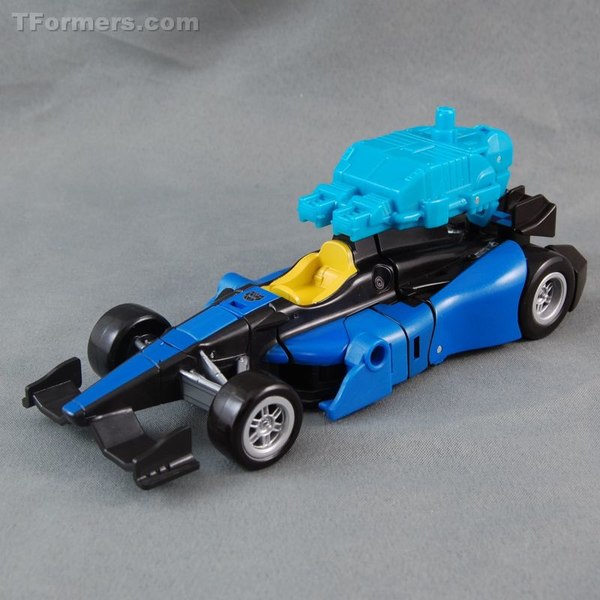 So, let's switch over to robot mode. And this is where I really like how the deco is arranged. Not specifically because of how the robot mode looks, but because the proportions of blue and black reverse. 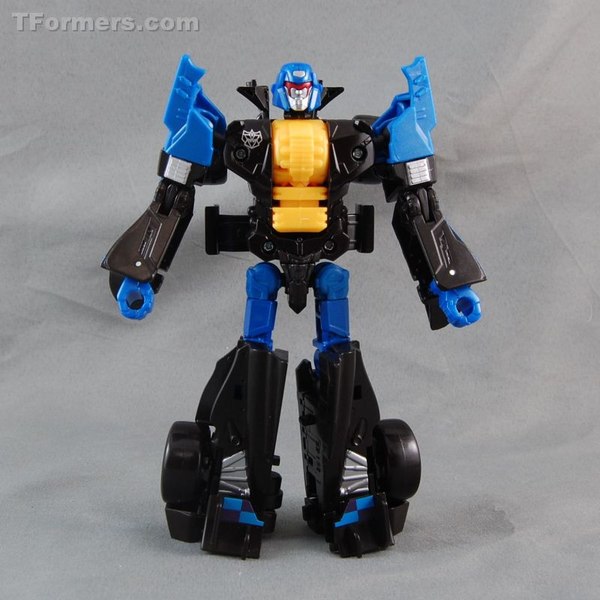 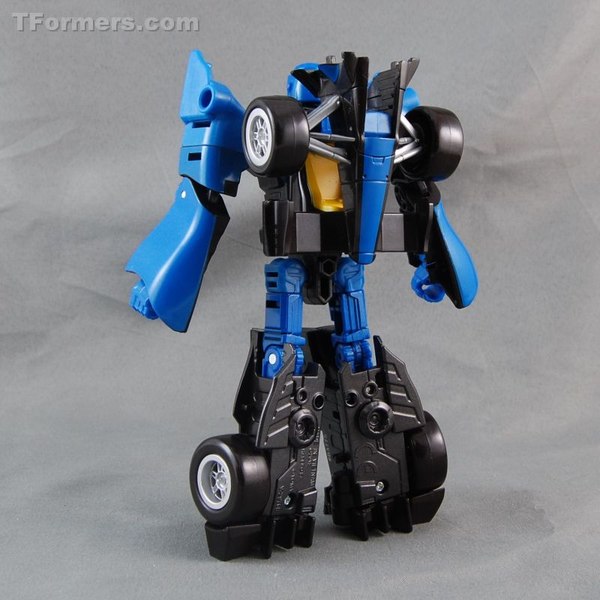 You get a kind of color changing effect thanks to the color layouts. What reads as a blue car turning to what looks like a black robot in terms of how dominant their colors are. It makes it seem like a greater amount of transition has taken place. 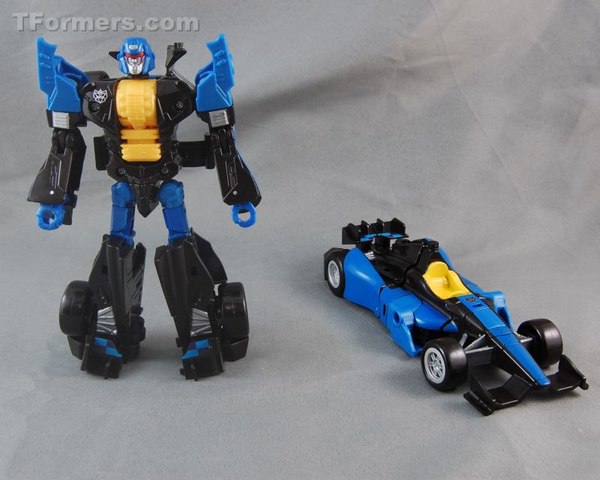 I like the choice of making the combiner plug yellow to take the place of the driver compartment. Keeping that bright spot in the torso helps the look of things a lot. 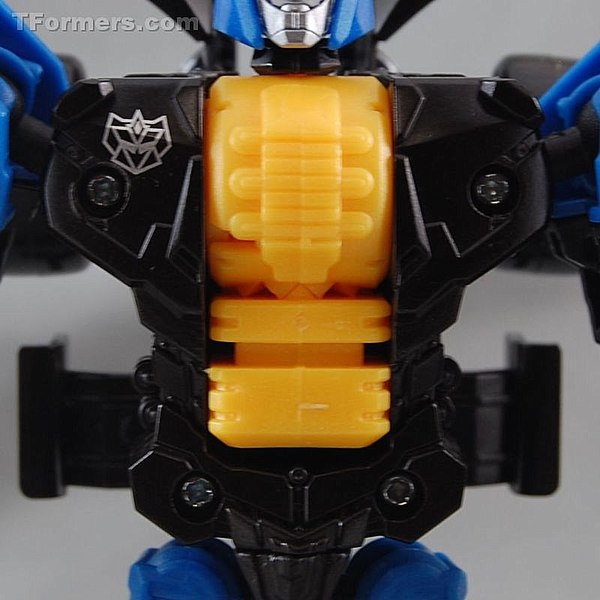 While the blue becomes secondary, its placement serves the look of the robot very nicely. Silver also becomes more important to the deco, with the rear suspension at the ankles and vents on the arms helping to break up the black. 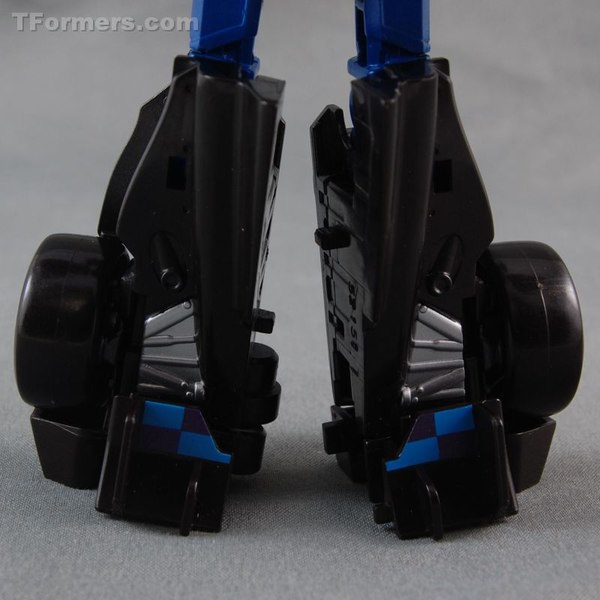 And one upping the vehicle mode, the robot mode insignia looks even nicer as just the silver outline in the black. 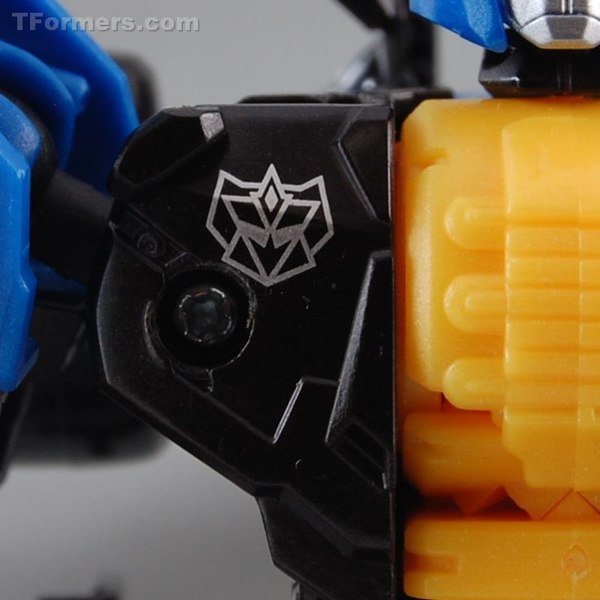 The head looks very nice in blue, with the silver face and bright red visor coming together in a very pleasing way. 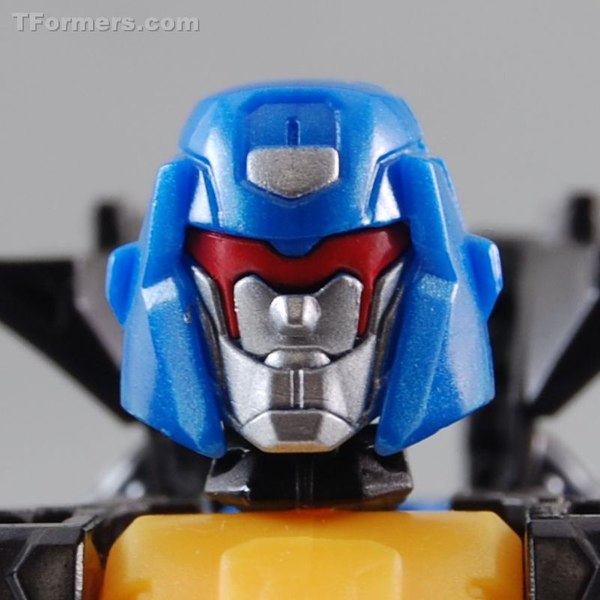 The vehicle mode I'd almost say is pretty. The robot mode doesn't have that going for it, but it still manages to look very good as it tries to work around being just a solid black figure. Whatever deco artist worked on Drag Strip did a very fine job pulling this one off.

Drag Strip's tolerances still aren't quite the best. The intended shoulder joint is stiffer than its transformation joint, so the arm may pull down in trying to pose it. 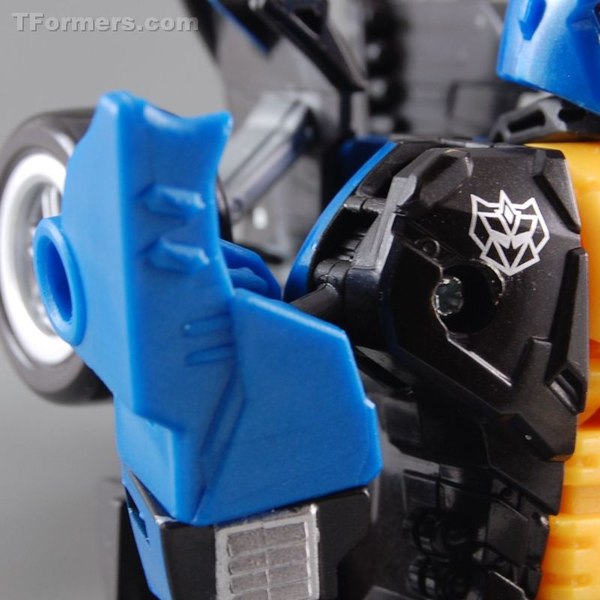 The elbows have good motion, with just the right amount of tension. But the hinged wrists are on the loose side.

The hips and knees are in good shape, and shouldn't have any trouble forming a solid combiner elbow. 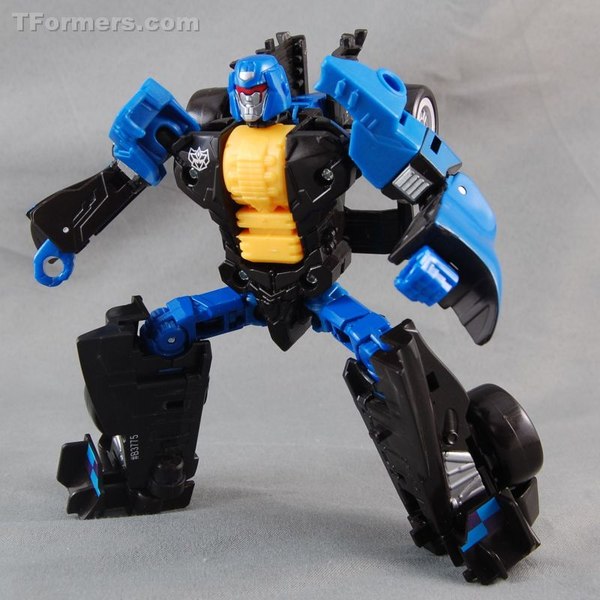 But again the transformation joints are a thing. Drag Strip is unique in having telescoping legs, as you probably already know. This Drag Strip does click when pulled to full extension, making it seem like the legs are locked. But it takes a very little effort to overcome that click and have them slide back down. Sometimes just setting Drag Strip down might exert enough force to do it. 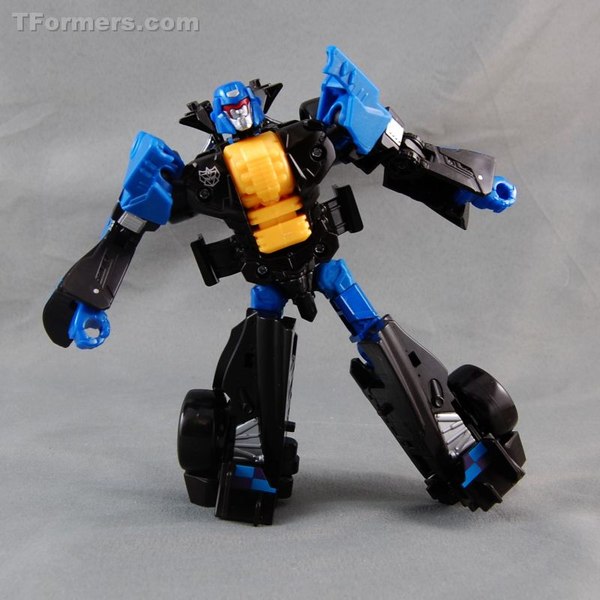 The tolerances seem just a bit too far out to get a solid catch with the legs, and that's kind of unfortunate.

Drag Strip's knife is that cyan plastic, and since it didn't get encased in paint, it actually fits and does its job with no issues! 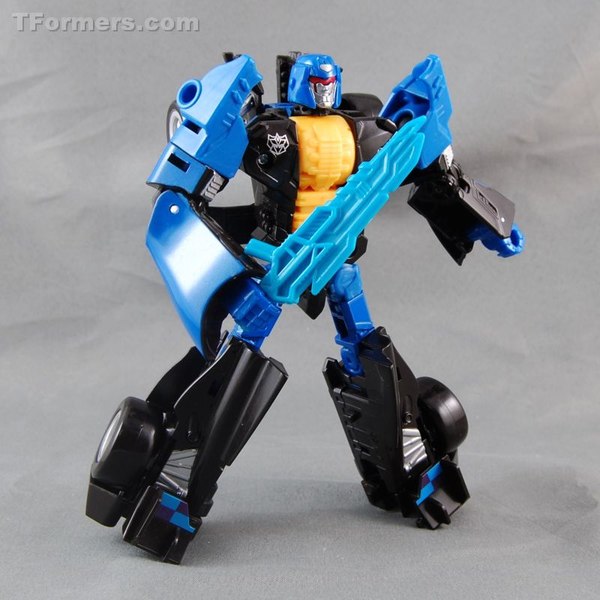 Or at least no issues that weren't present anyway, like what to do for vehicle storage with that angled side peg. 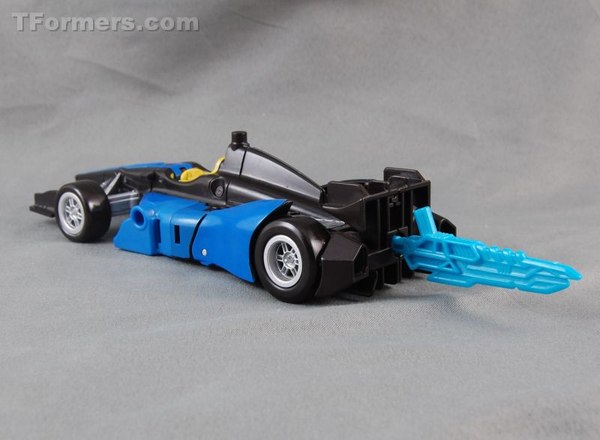 But even in this smaller piece I still think that color clashes with the rest of the toy's blue. Of course the alternative would be having it covered in paint and possibly being affected like Breakdown, so maybe I'll live with this instead. 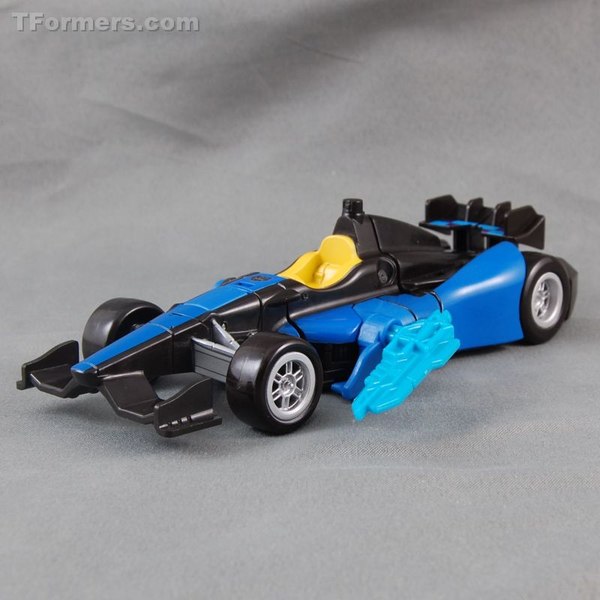 The hand-foot gun can also easily be hand held, or plugged to one of the ports on the shoulders for a snug fit in any of these locations. 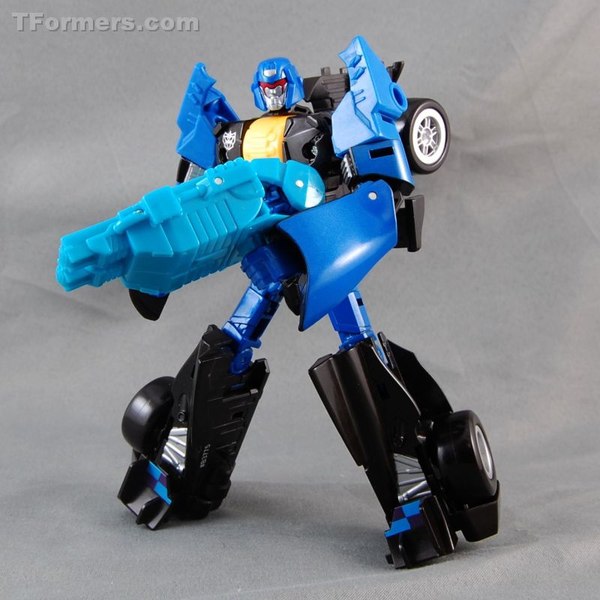 When I first opened this set, Drag Strip was the figure I put aside first. Because at a casual glance it's just not nearly as interesting as the rest of the team. G2 Drag Strip has always been the boring one, and in updating that team, it seemed like something that would just have to be accepted now. But that's wrong. Drag Strip is definitely very different from the others, but it's not just sitting there and accepting its lot in life. The deco has been overhauled and tweaked and made so much better than the source it drew from, all while staying true to that unreleased original. Combiner Wars redefines G2 Drag Strip, and despite it still not being stereotypically G2, it's now a very solid color scheme that can stand and look good anywhere.

The Stunticons are 3 for 3 so far. Will the next one break the streak? Could I be even more impressed by whichever one is next? I'm looking forward to finding out!