You know, even as rare as the originals of the limbs of the unreleased G2 combiners are, it's believed that the torsos are rarer still. And wow is that a shame, because G2 Motormaster has a wonderful deco, and it's terrible that it took over twenty years for it to finally see use at retail.

Motormaster feels very pretty. It's using the violet that made Blackjack so nice, paired with the wonderful blue some of the Deluxes utilized. And then the cyan makes an appearance for the windows and headlights. Motormaster is like a greatest hits compilation of the team's deco. Oh, and then there's some red, too. Whatever. 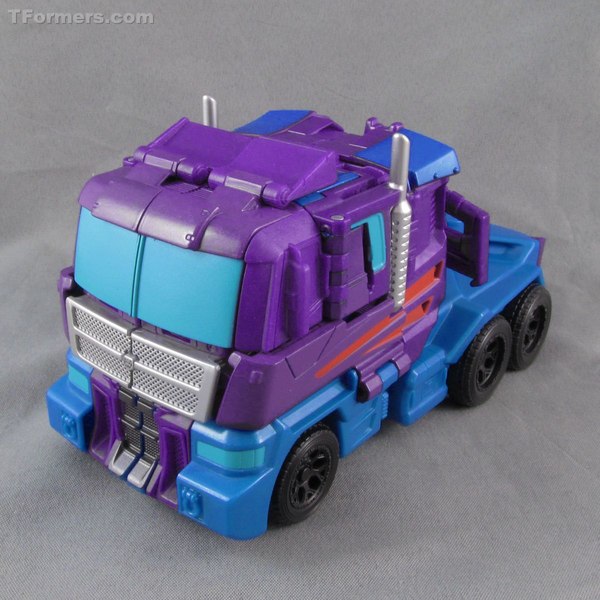 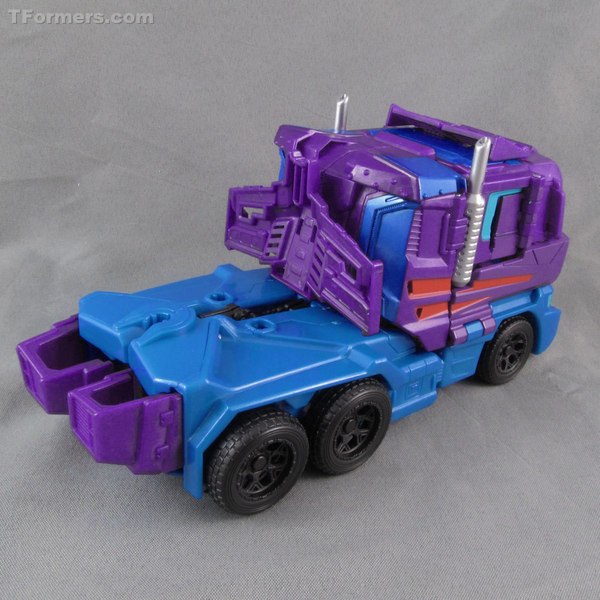 There's some shade mismatch between paint and plastic in the violet range, though that doesn't really surprise me. Also not matching are the different types of plastic. The mold's unpaintable portions vary noticeably from the adjacent material. 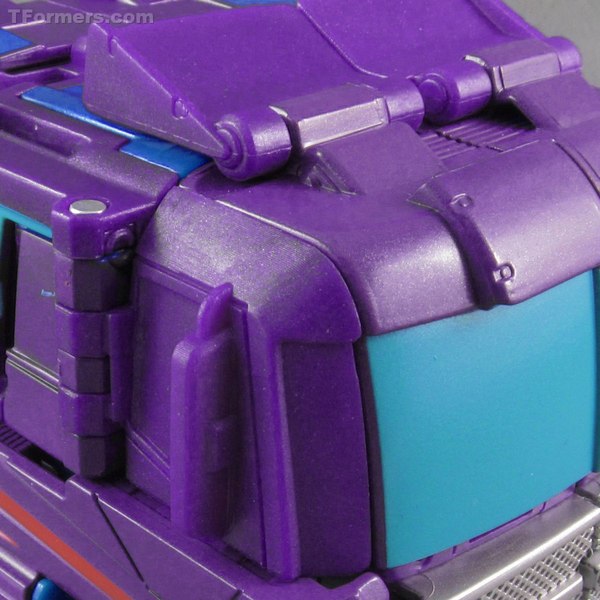 It's not quite as together looking in that regard as G1 colors Motormaster, but... well, we've had it far worse, too. 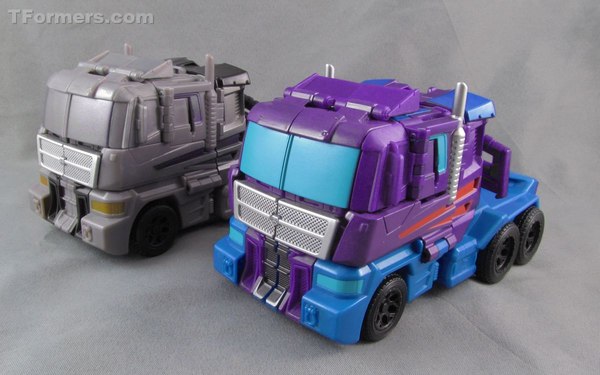 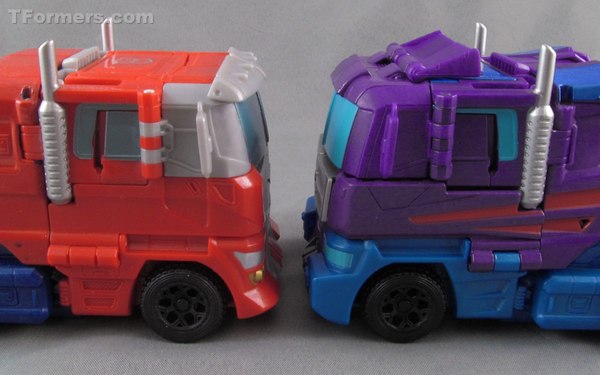 The blue plastic has that metallic quality to it, and that is matched very well in the blue paint apps on the roof. 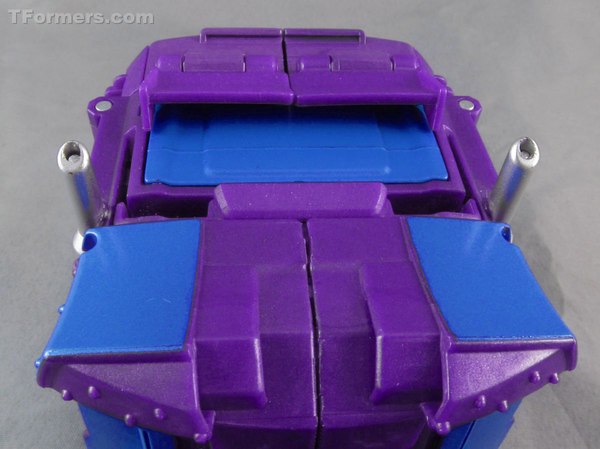 I like the color layout a lot. The division between the upper and lower halves of the cab being their own colors looks really nice. It's only interrupted in one place, in front where the unpaintable plastic is again needed. That being the case, I think I'd have switched the gunmetal paint on the grill there for purple to try to bring those elements together as much as possible. It's not looking great with these many different colors lined up like this. But I'm very impressed by how eye catching and pretty this truck is. 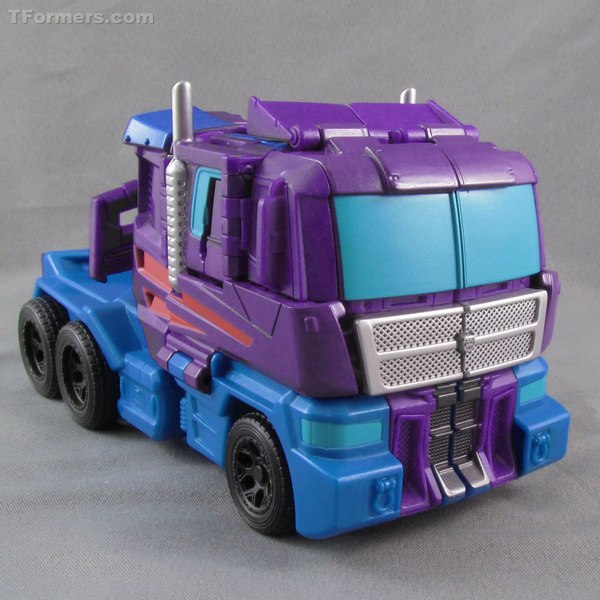 The parts fit is also good. The panels and chunks hold together solidly without any fuss. It feels smoother coming together than the G1 colors, and is just more pleasant to deal with over all.

Suffice to say, the weapon storage still exists. It looks no better or worse than before, and the parts are held adequately. Moving right along... 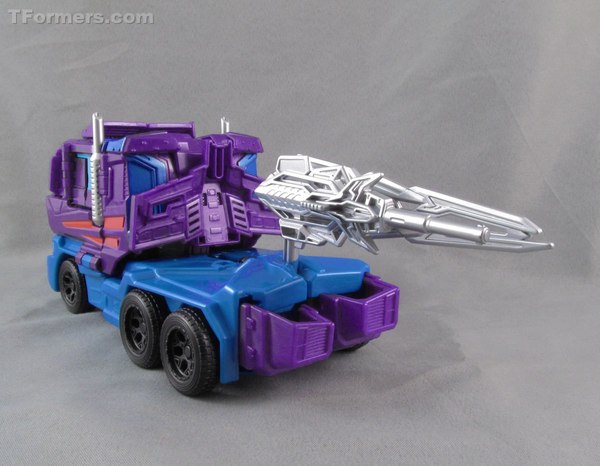 One caution in transforming. I found the head's flip around panel the most difficult thing to move, and to get to lock in place in robot mode. It seems to work better from one side than the other, so just be careful with this and find out what works best on your toy.

Motormaster is an amazing visual assault in robot mode. The violet has exploded all over the body, a lot more red is present, and it's all fighting with that rich blue for visual dominance. Oh sure, there's some black trying to keep things under control, but this is a lost battle. And the great thing is that it's the competition among these elements that brings them all together and makes the whole thing work. It's such a chaotic visual that it harmonizes in some perverse way and comes out the other side. 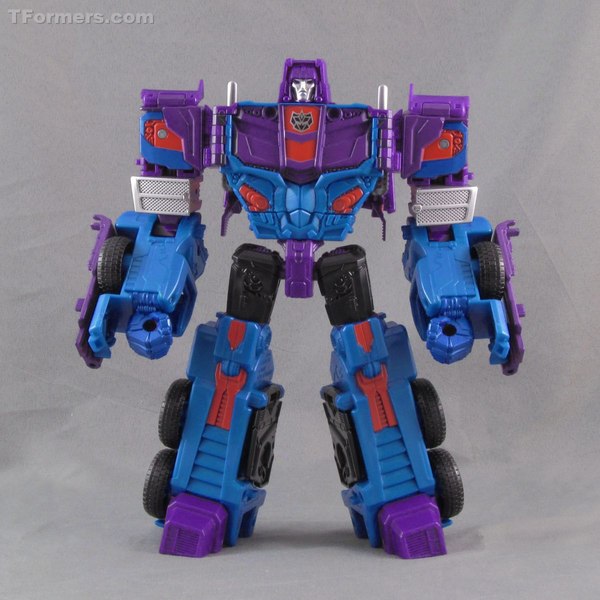 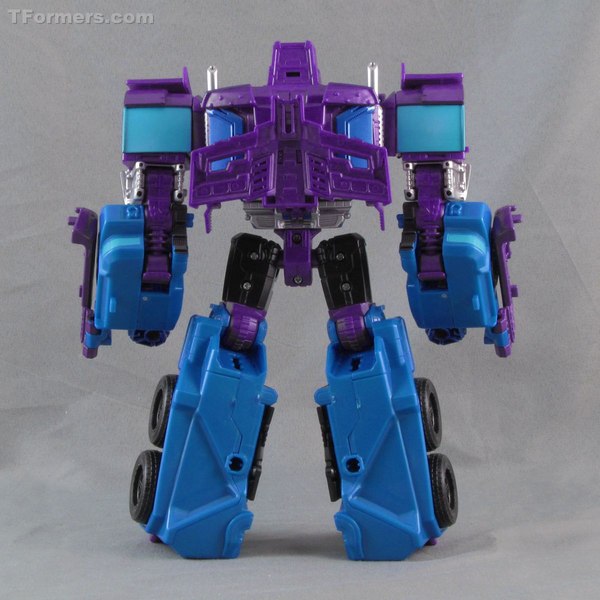 This - THIS is the essential embodiment of what it is to be G2. We've finally arrived. 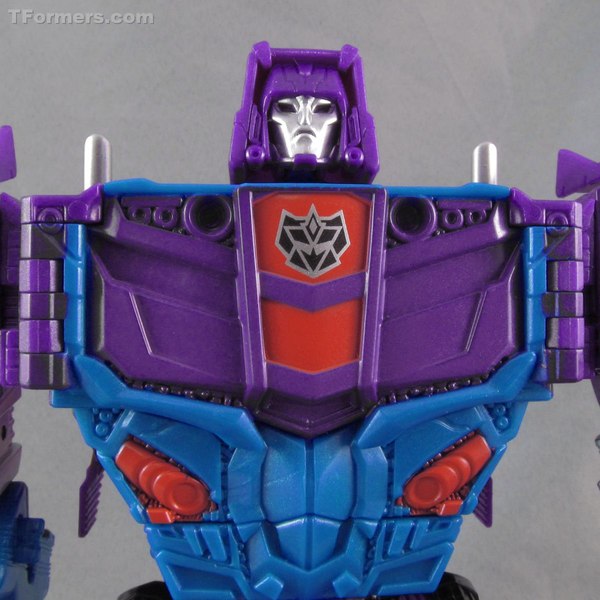 So this is my first example of this mold family with the updated hip ratchets that started with Unite Warriors Menasor and Battle Core Optimus. They certainly do make the basic A-stance work better. And if you're content to leave Motormaster standing that way, it's fine. 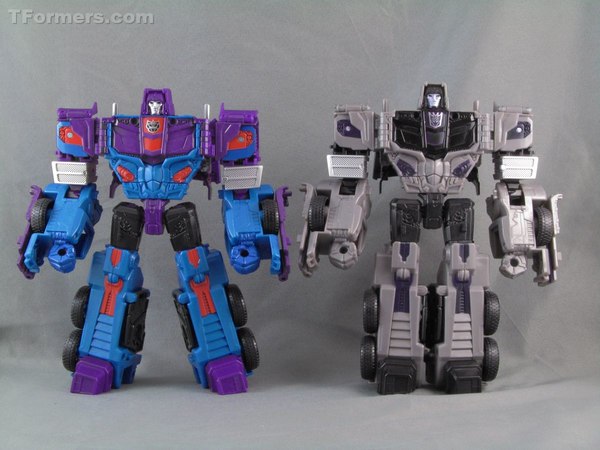 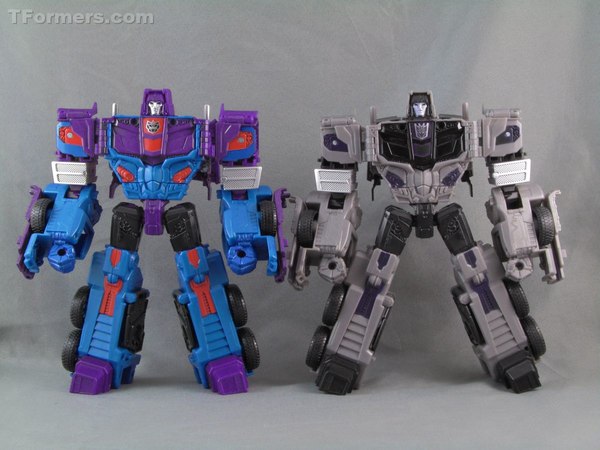 I think I understand somewhat why the originals were arrayed differently. You can't bring these legs together any closer without one crossing over past the center line. This is especially an issue with transforming back to vehicle mode. 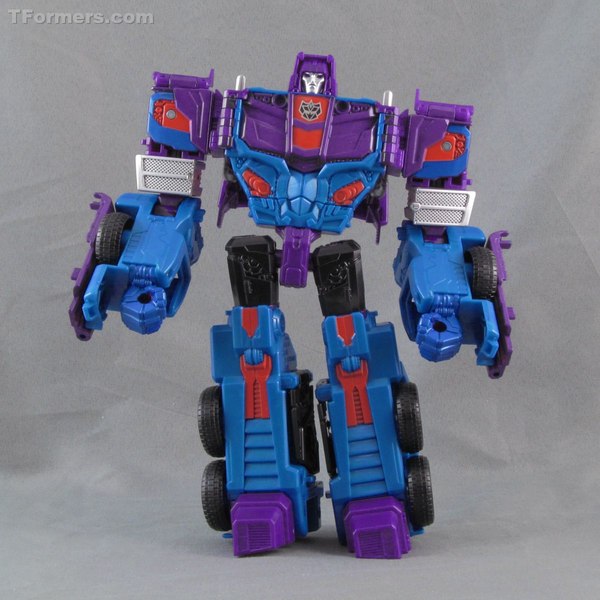 And aside from that, there aren't any more ratchet points, so there's no added flexibility in the outward movement, just different angles. It's a mild improvement, but it brings some problems with it. 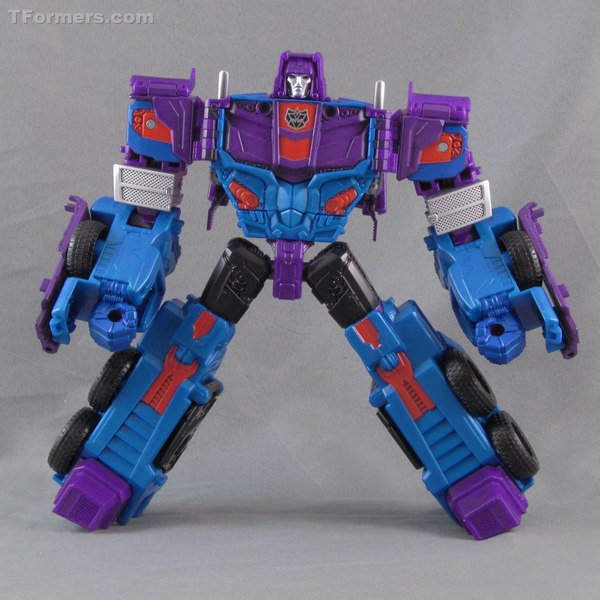 Joint tolerances run a range. Starting with stiff swivels, ratchets and hinges in the arms, to adequate ratchets in the hips... 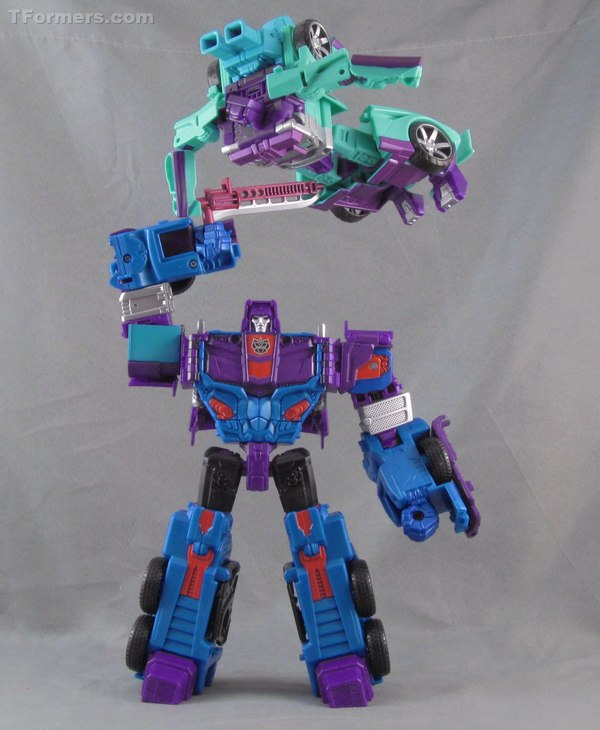 ...finally to worryingly weak knees. Now, the knees don't seem like they're a problem for the robot mode in general use, or at least I haven't encountered such as yet. But for greater load bearing they're not gonna be a good thing. 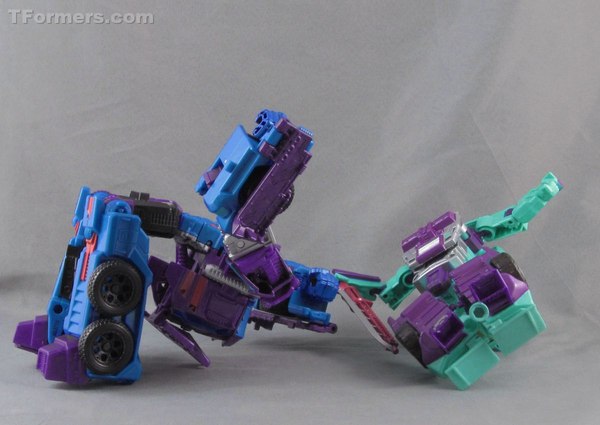 And tightening the screw seems to have no meaningful effect on the tightness of the hinge. The only good news here is that it's possible to open the lower legs entirely, so you could perhaps apply something to the knee to stiffen it. Of course I'd prefer they just come out of the box with the appropriate tension, but I'm odd like that. 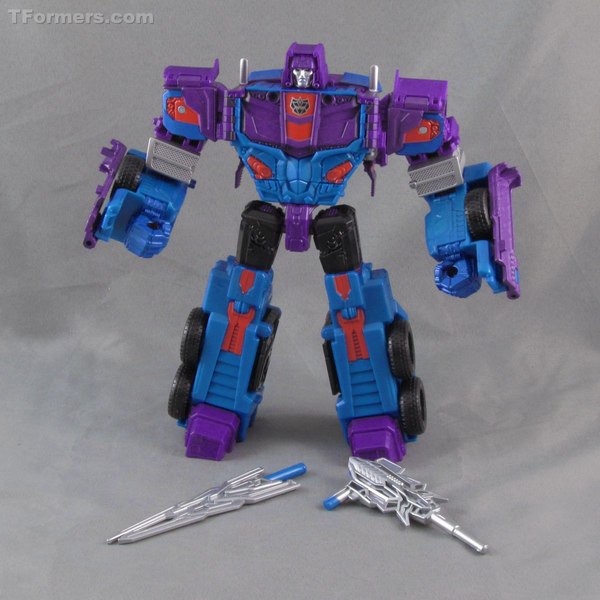 For the record, I still dislike Motormaster's accessories. The short form of the sword doesn't work with these hands in any reasonable way. 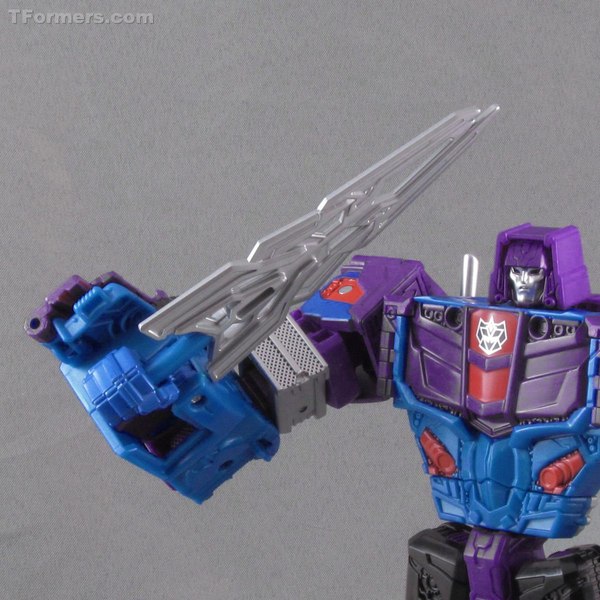 And the alleged gun is really dumb. 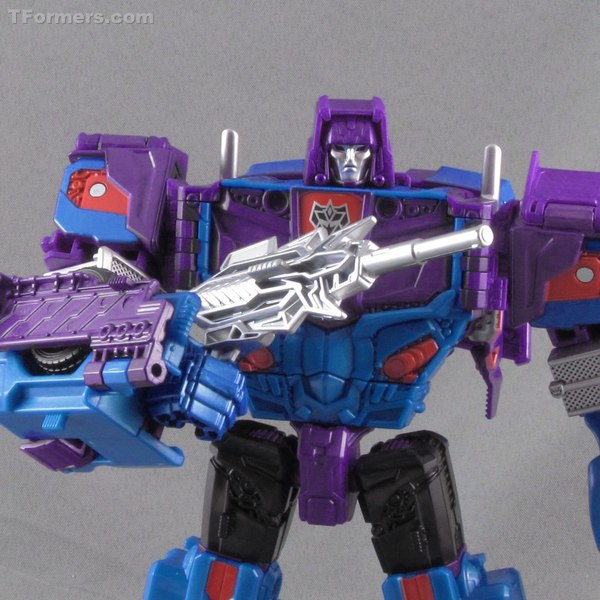 At least they have the same silver paint as the original so the finish is attractive, at least. 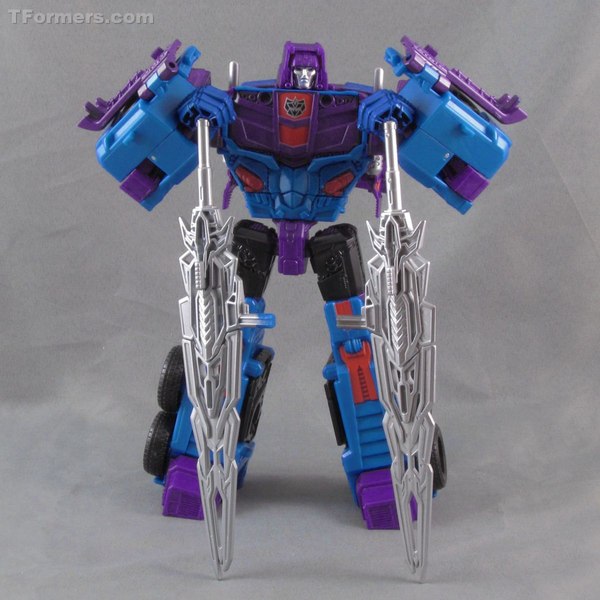 Motormaster's not perfect, at least in the build. There's some flaws with the deco, but much smaller by comparison, and they pale compared to everything it does right. This is G2 in one easily demonstrable package, and I could hardly be any happier with the execution in that respect. And for the most part the build problems aren't major, for use as an individual. But when we take this to the natural conclusion and new mass is added, I worry about how it'll hold up then.

Don't get me wrong. I am 90% or more pleased with how Motormaster turned out. I like it better than the G1 colors in practically every way. I just have concerns, and I guess it's almost time to address them head on... 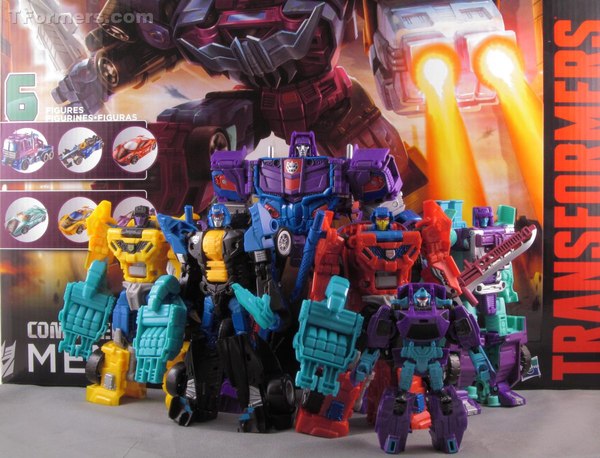