Pledges are made. Masks are shed. A journey into the land of the dead is undertaken. The final battle begins. Transformers vs. GI Joe #12 is written by Tom Scioli and John Barber with art, colors, and lettering by Scioli. 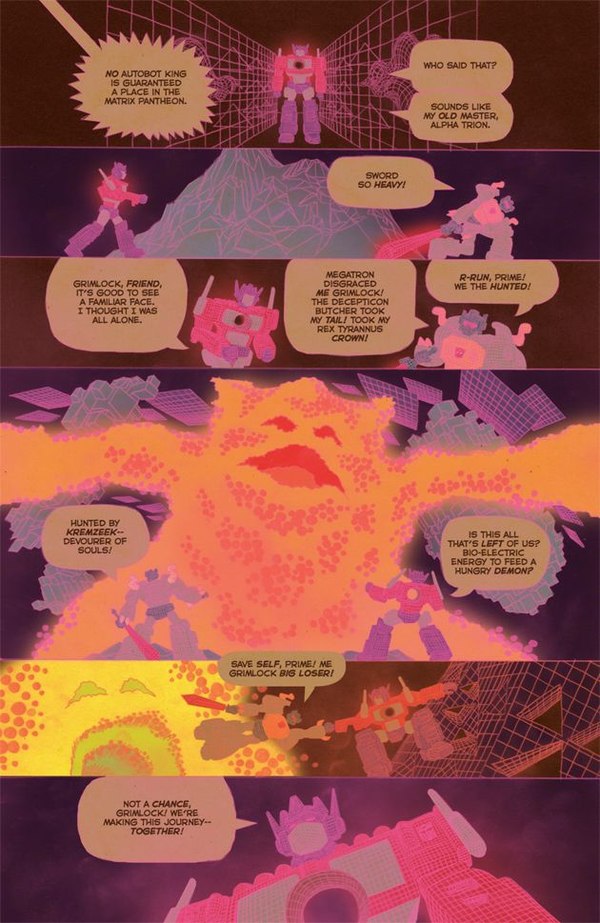 I like how the book is willing to almost fully drop the retro comic styling - if the scene calls for it.

The Rescue Bots - Blades, Arcee, Jetfire, Red Alert, Inferno, Ratchet, Prowl, and Peacemaker - seal their oath to protect the human race with a Combination Lock, becoming the Titan Defensor. Doc performs his autopsy on Wild Bill, which ends abruptly. And Cobra Commander comes to Cybertron to meet the Serpentress. In the afterlife (Afterspark?) Optimus Prime meets with his old friend and fellow Autobot leader Grimlock, and they begin their journey to the Matrix together.

This issue has three concurrent storylines: the Joes preparing for the final battle, Cobra Commander's return, and Optimus Prime and Grimlock's journey. By the end of the issue, most but not all of those story threads have converged in the beginning of the final Jotobot vs. Decepticobra battle. With that battle continuing in the next (and final) issue, presumably the final aspects of this one will turn up there.

Two of these three stories feature unmaskings, and unmaskings Scioli is particularly proud of in the issue commentary. With good reason, I'd say: I don't think anything less would've really been impressive for Cobra Commander after all these years. It certainly beats the last attempt I saw to create an unmasked version of the character. The unmasking in the Joes' part of the story is less of a shock but still very well done. Optimus Prime's scenes with Grimlock have no unmaskings, of course, but their interactions on the few pages dedicated to their journey are possibly the highlight of the issue for me, being extremely symbolic. Optimus takes up Grimlock's ever-heavier burden ("THE SWORD: Symbol of Vendetta") in order to let Grimlock enter the Matrix in his stead. Very symbolic, and with heavy mythical overtones - Jack Kirby would definitely approve.

Part of my enjoyment of that scene comes from the fact that the afterlife scenes are the most visually distinct part of the issue as well. They're a real departure from the overall look of TF vs. Joe; everything is rendered in Energon-pink wireframe. Some of the lineart is very, very fine, and looks good on my digital review copy... but I wonder how that's going to work out in print? I hope it works well, because the clarity and otherworldliness of that section, compared to the vintage paper texture of the rest, is refreshing. The rest of the art is its typically atypical self; that is, looking like the rest of TF vs. Joe and thus like nothing else out there.

The main cover this month is of Cobra Commander and the Serpentress in a somewhat intimate embrace. He's seemingly appearing out of nowhere, but is it her cape obscuring him or is he dragging her down into darkness with him? It's a simple cover but reads in a variety of interesting ways. The alternate cover depicting the Baroness and Shockwave is by one Giannis Milonogiannis, whose name is mispelled within the issue (at least on my copy). I had been trying to place the style since I saw the cover, because it was reminding me of something. A look at Milonogiannis' website helped cement that for me. There's a lot of influence from Appleseed and Ghost in the Shell creator Masamune Shirow which, if you're looking to put carefully-rendered robots and attractive women of action in the same image, is a pretty decent influence to have. I have to assume that Scioli has had a hand in selecting the guest cover artists for this series, because from the start it's been an interesting selection of people I've never heard of before or had never seen do Transformers & GI Joe art before. It seems to me that introducing people to new artists and art styles is well within the mission statement of this comic, and that's something else I'm going to miss.

Because we've only got one more issue, as I said above. I definitely don't doubt Scioli's ability to bring this story to a satisfactory ending in that space, but I have only the broadest guesses as to how that will happen. Which I'm fine with. This hasn't been a predictable comic up to now, so why start?