The truth comes out. But which truth, how far, in what way, and to the benefit of who? And even after all those questions are answered, there's still Mayhem - and the Noisemaze - between Prowl and the Wreckers, and safety. Transformers: Sins of The Wreckers #4 is written and drawn by Nick Roche with colors by Josh Burcham.SPOILER WARNING: this review is more in-depth than is typical for our comics reviews, so events beyond the official preview may be revealed! 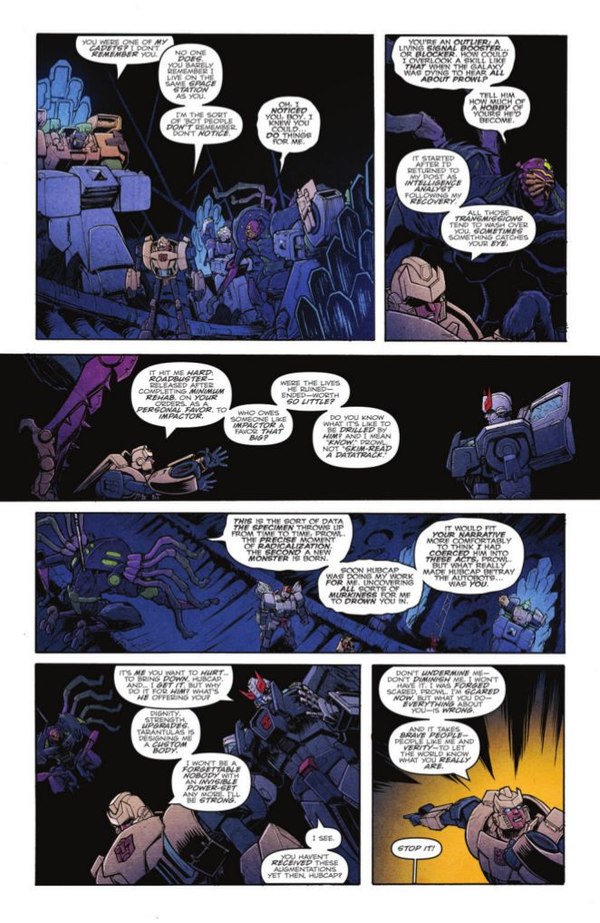 Of course his reasoning is petty and vindictive - who could ACTUALLY believe in telling the truth?

One last warning: while I usually try to keep things vague in terms of what happens in a comic after the part shown in the official preview, that's going to be a little more difficult this time. Spoilers may follow!

Okay, so. One of my concerns with Sins of the Wreckers from the beginning was that it chose to tackle a fairly pertinent, important question that plagues us in the real world very frequently: when it is appropriate to tell the truth about an organization, and when should the truth be hidden because of the greater consequences of revealing it? There is no way to write this review without providing my personal opinion on this question: any organization that cannot withstand the telling of the truth of its own actions probably does not deserve to. I also believe the dire consequences of telling the truth are frequently exaggerated by those with power to evade accountability for their actions.

I was not expecting the comic to come around to my specific viewpoint, at any rate. Especially when it was made clear to be a minority viewpoint in issue #1. But I was hoping for a thought-out argument as to exactly why the sensitive Aequitas information had to be hidden. I did not get it, and issue #4 has made it clear that I'm not going to, either. What I got were the same platitudes from the first issue about re-igniting the war (when currently the tiny corner of the Transformers world under Autobot control is again at war with the Decepticons.) And the other one about how telling the truth would somehow be an insult to the memory of those who died to uphold those lies and those who died believing them, the latter of which is a sentiment I cannot disagree with more strongly.

It's not even that the story doesn't agree with my politics. I won't lie, that could and does annoy me with some stories depending on how it's done. If it was presented in such a way as to give me something to think about, I'd ultimately call it a well-done story. I certainly didn't set out reading More Than Meets The Eye expecting to sympathize with Megatron, nor Soundwave in The Transformers. Yet I do, to a certain degree. I understand how they got there, and that - at least in the beginning - their beliefs were not held out of poor mental health or a sense of selfish malice.

Stories that are reaching for real-world relevance irritate me when they go out of their way to make the opposition seem universally foolish, stupid, or evil. Sins of the Wreckers seems unable to imagine a world where sane people can disagree with its stance on the central issue in good faith. Which is great if you're arguing politics on the internet! But much less so if you're trying to have a real conversation - or to tell a story with nuance and believable characters.

Prowl and how he is perceived by the Wreckers is also a major problem for me. Prowl's failing - and this calls back to scenes earlier in the series - is called out by a character in this issue as one of follow-through. He's chastised both for doing the things he did and for not being willing to do all of them himself. This character seems to think that there is an inherent nobility in the team for their willingness to go through with the bad things the bad person proposed when he would not do them himself and probably never should have asked anyone else to do them. Even though they hate Prowl and want to see him punished for being a bad person, they want to protect the Greater Good he somehow created out of Smaller Bads, and resent him for not doing even worse things if they are deemed necessary.

The best I can get out of this complex web of positions is a passionate apologia for "just following orders." If you're looking to make a team with the history of the Wreckers seem sympathetic, that is definitely a tack you could take. I guess. But in a comic that is trying to take a stance on real-world issues a seeming defense of "just following orders" is very much off-putting. And at this point it is almost completely impossible for me to sympathize with anyone in this story.

Despite my misgivings about the direction of the story, the comic looks great. Roche and Burcham work as well together as ever, and Roche's mastery of time-tested inking techniques - heck, of inking and the use of black in general - mean that the book looks gorgeous. There's not much else to say that I haven't said before, but let me reiterate it here so that the good points of the issue are stated as strongly as the bad: Nick Roche is an excellent, excellent artist and this comic looks fantastic. The 2.5 star/5-out-of-10 I'm giving this is for the art, all the way.

Three covers. First up is the standard cover showing Roadbuster staring down Hubcap, and pretty much everything I've said about Roche's skill with shading and inking techniques are on display right there. It might be possible to achieve this with digital techniques, but I'm not certain about that; I'm reasonably sure Roche works on paper, and there's just a great feel to it that I think comes from that. The subscription cover is by Jack Lawrence, who James Roberts has mentioned on Twitter is an artist he used to work with back in his fanfiction days. It's a good image of the main cast, clean and well-composed. Be happy to see him work on Transformers again! Lastly is a cover by Burcham of Prowl playing with Wreckers-shaped chess pieces. Opinions may vary on Burcham's Animated-influenced artstyle, but I like it - and Prowl looking like a smug jerk while he manipulates others is entirely appropriate.

There's one issue left, and I am truly curious to see if Roche can change my perspective on the rest of the series with this last issue. My suspicion is that the last issue will instead be given over to dramatic action and that the course of the story is pretty well set at this point. We'll see.