In this installment of the Victorion box set reviews, it's a double shot of helicopter! Why do I have both of these here at once? Because right down to plastic colors they're just the same. With only paint work and another detail or two setting them apart, it's going to serve things best looking at them at the same time. 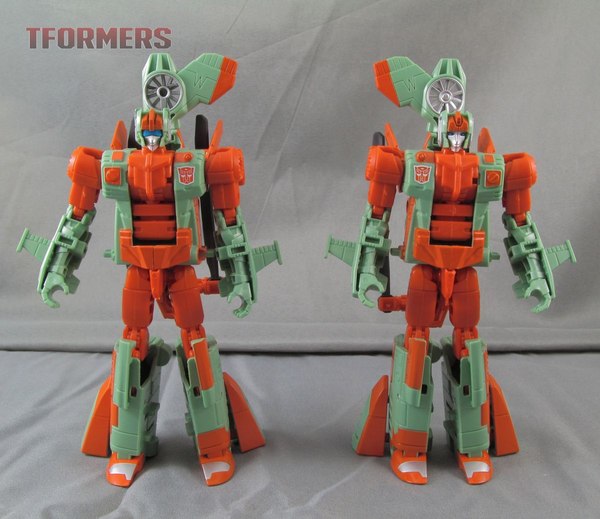 They do each have a unique headsculpt. Even though Skyburst and Stormclash have similar shape heads, both feature unique detailing from each other. Plus one has glasses, obviously. 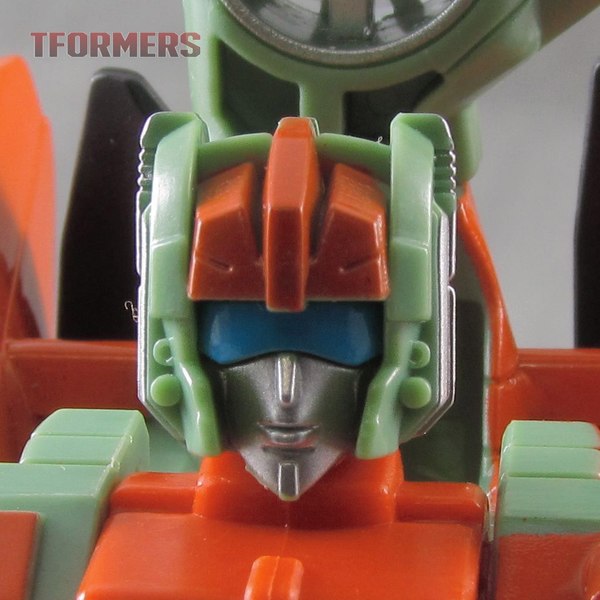 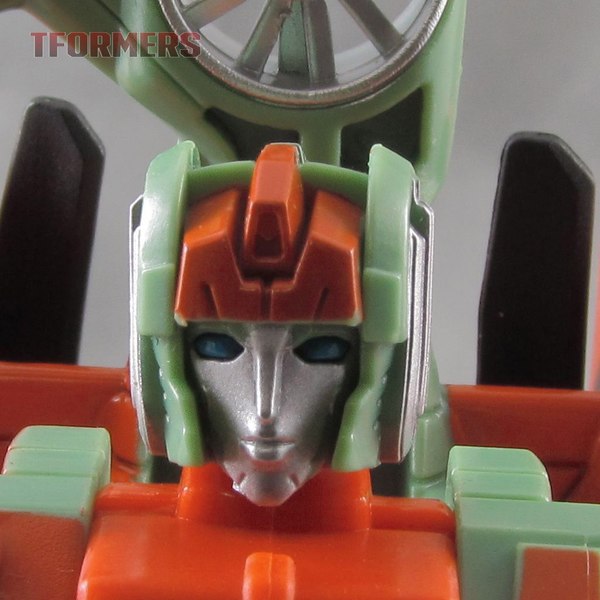 The neck joint offers just as much range as any previous instance like Blades or Alpha Bravo did, so both of these helicopters have freedom of movement and some expressive potential. 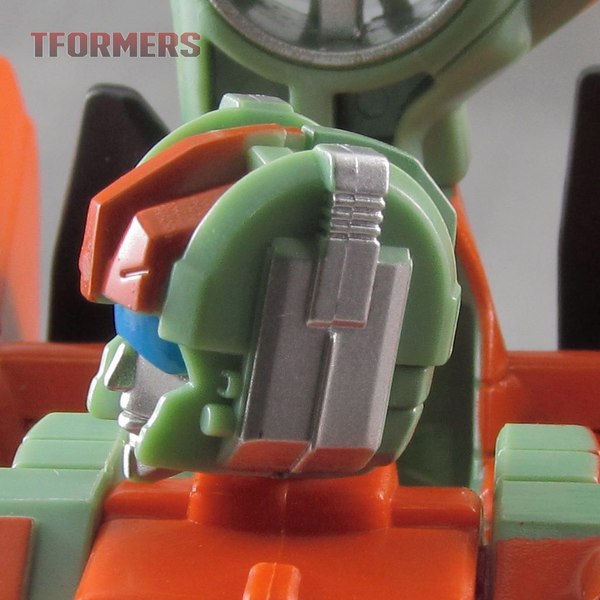 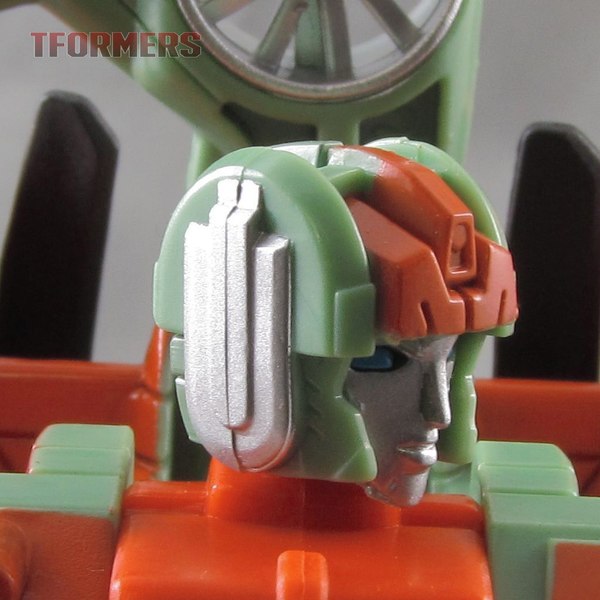 The overall gimmick with these two figures is being mirrored. That shows in the deco most, which we'll go over later. But it's also present in the torsos. Each features some new detailing on one half of the torso, though still staying close to the normal look of the mold. And this is actually the neat part. This mold is made where the chest splits left to right instead of front to back. So what seems to have been done here was a full new torso was sculpted, and then at the point of assembly each figure got half of it. It's one of those things you could probably only do in a box set production. And this has the potential benefit that a later use of the helicopter body could use the full new torso and be yet again more distinct from any earlier use of the mold. 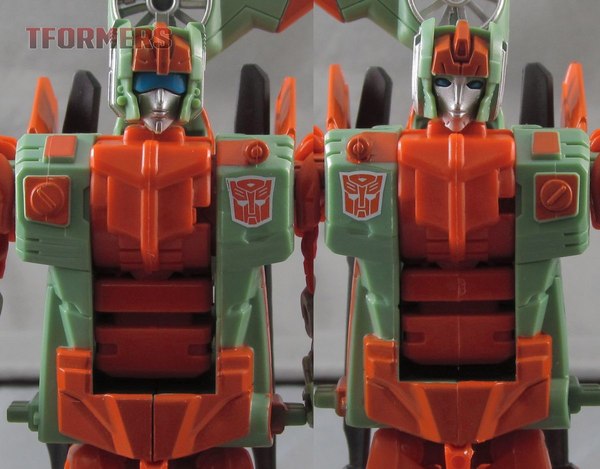 The helicopters get new forearms as well, and my first reaction to that is it's about time. The missiles are gone, and little winglets have been added. They're nice looking, I like the sculpting and they fit in well. I'm experiencing the same problem I had with Vortex where the elbow hinges are too tight in some cases and bending the arms has caused stress marks, which I know from that time won't show on camera. My copies here don't seem as bad as Vortex, but you should definitely watch out for this and be careful when first handing these figures. 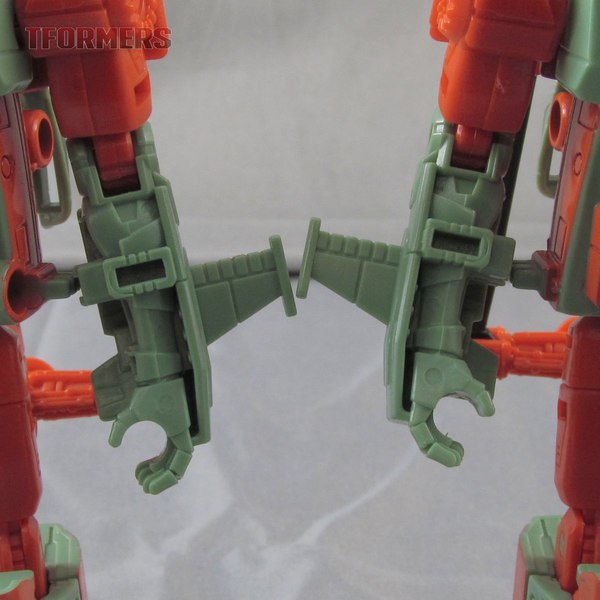 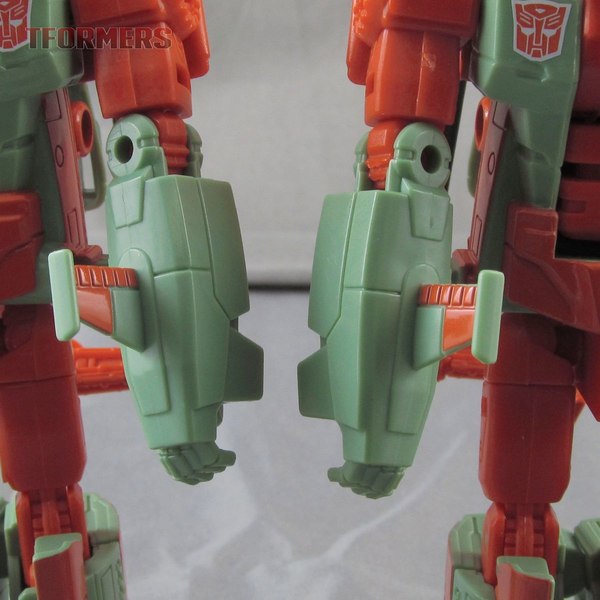 Apart from the elbows, the joints are all in good shape. The ball joints show a nice strength, and the waist swivels and knee hinges feel good too. I have one issue on Skyburst that's just a mismolding on the pelvis which prevents the waist from snapping to center from one side. I have not been able to get access enough to it to trim it back to shape. It's just a defect though, not a production issue. Stormclash is fine.

While I'm not going in to full detail because we had so, so many of this mold already, I will note here that these two feel really good to transform. Probably the best such experience of any version I've handled. And that goes in both directions.

Well, these sure are the helicopter mold. Yep. But wait, there's more! Those new robot arms that I liked so much as robot arms? They're here too! And now I don't like them anymore! They're the only new parts really visible in helicopter mode. Of course you could see the new chest halves if you turn the vehicle over, but still not significant changes. 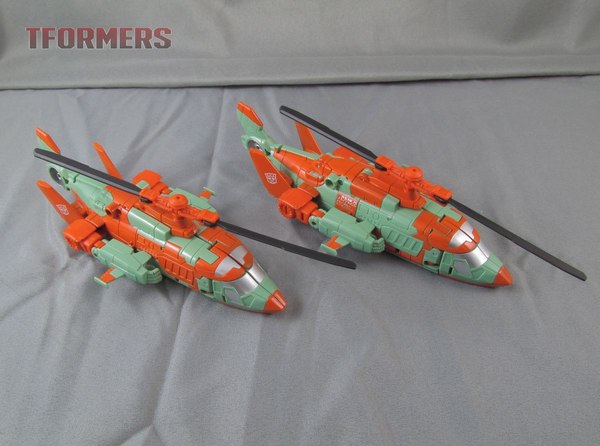 These arms though, they make quite a change, and not all for the better. I like having a different shape and the little stabilizer wings, but... HANDS. 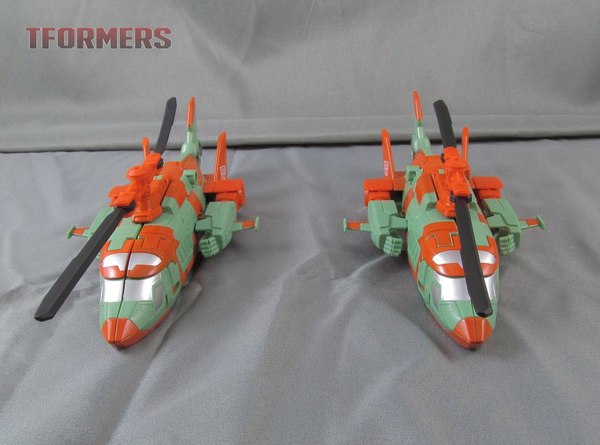 I'm sick of the missile arms, sure, but you have to admit they were better at covering the robot hands. These just hang out and it bugs me. Maybe I'm too picky, but couldn't there be another way? 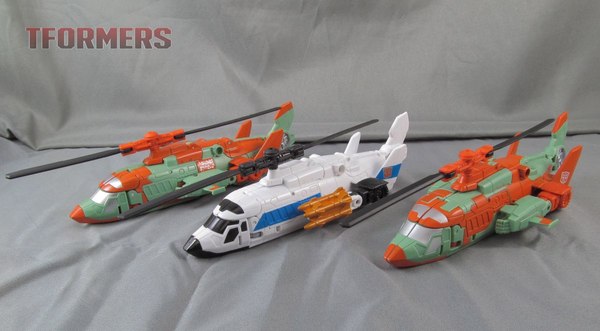 The deco gets to me too. At the base, they're both using the same plastic colors, so underneath all they're both green helicopters and mostly green robots with a few red bits. But in playing these up like twins it was decided to give them mirrored deco. Which turned them both in to a huge mess.

This shows more clearly in vehicle mode, where it's easy to see just random patches covered over in red paint with no independent reason behind it. And seeing the opposite done on the other figure. This screams to me of having more paint budget available than sense of how to use it. 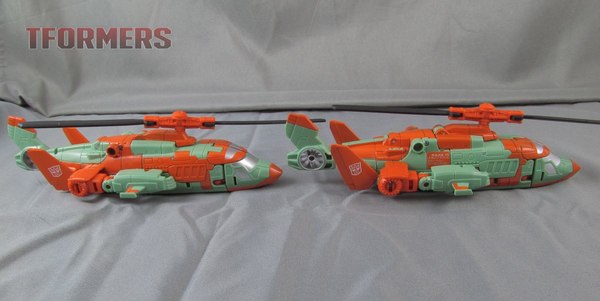 The robot modes look alright because from the front especially you just can't see it so much. Small patches on the legs and that's about it. 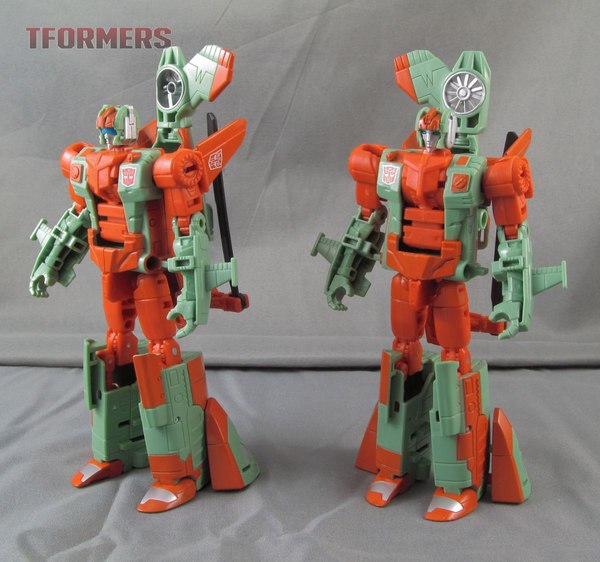 But these vehicles look like junk. And I mean that literally, they look like they were pieced together out of a salvage yard. Actually this method would probably be fine for Junkions. 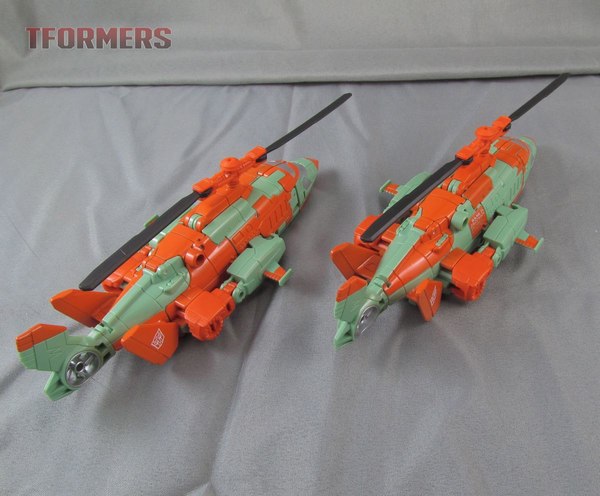 And what annoys me more is I have a perfect vision of how better to do this: Invert the plastic colors. Make one a green helicopter, one a red helicopter, use the same paint masks for both but just in opposed colors. It's still a form of the mirroring thing they're going for here, but would make them look a lot less haphazardly designed. I have to imagine there was some cost benefit to keeping both in the same base plastics, but man, I really strongly dislike this.

Don't want to forget, here are the panels of Cybertronix on the helicopters, one set each. 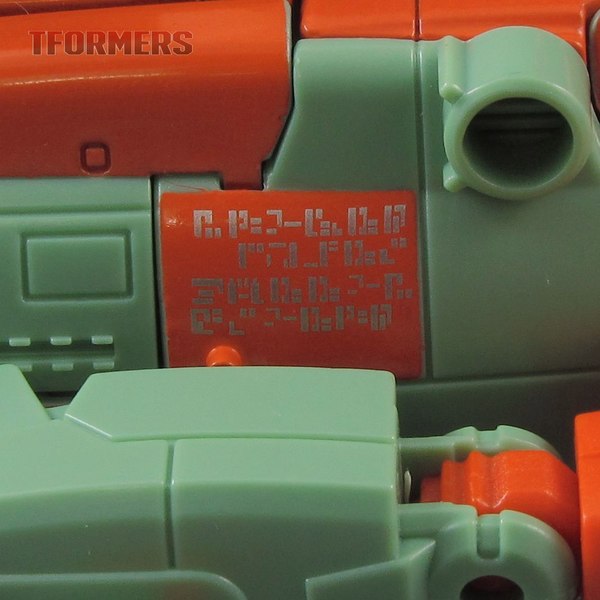 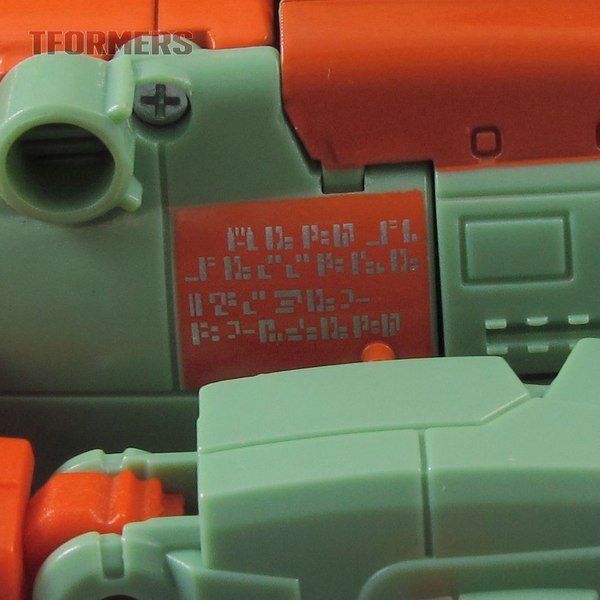 They also get matched accessories, giant swords. These form the blade of Victorion's sword. The wings of the Lightning Bug. That's why the blades look like insect wings and are painted this way to simulate translucence. They're nicely painted, and the slightly dark silver looks nice in contrast. 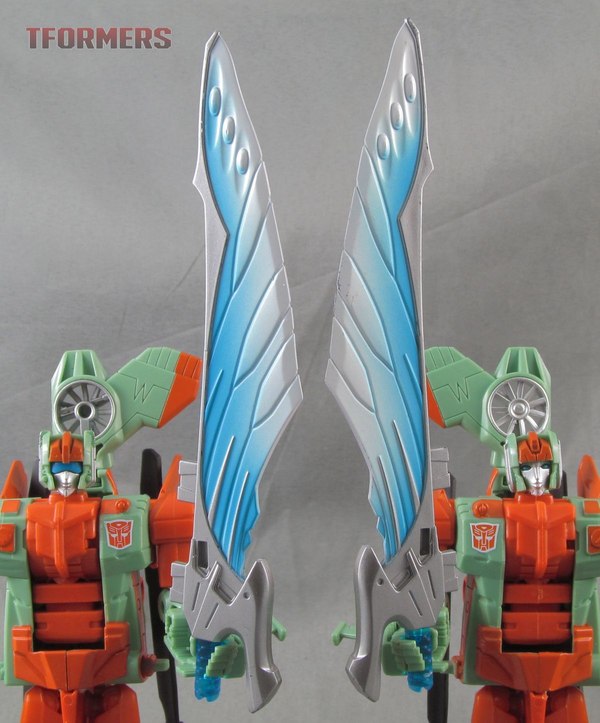 Now, as for who gets which one... well, it doesn't really matter, but if you want to keep it consistent for your own sake, you can try my trick. Match the blade to the green side of the helicopter, edge facing outward and solid side of the handle up. For me it's the most reliable way to keep track of which to keep to which figure.

Meanwhile, see the slot in the side? That just happens to fit the tabs at the figures' waists. 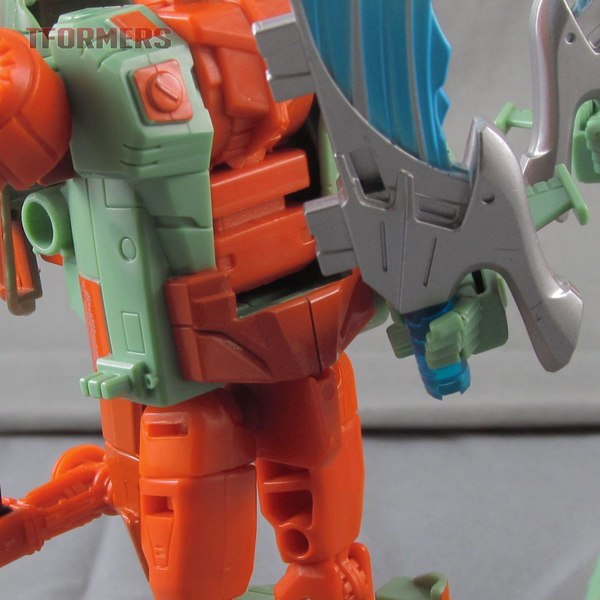 Sticking straight out the back is maybe a bit awkward, but I like having a storage option that looks at least mostly right. 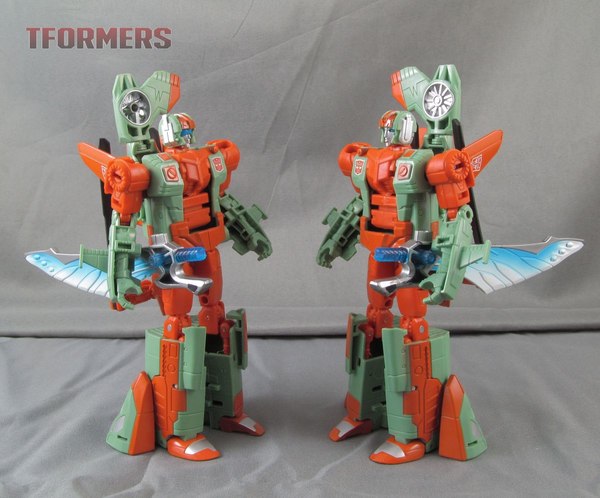 In vehicle mode, you can only really peg them in underneath. I don't like it, but if you have to keep them somewhere, that's it.

These two show the bad side of the team deco, by taking it and making a huge mess all over the figures. I don't like that, and it's only small salvation that the robot modes mostly look okay and you can ignore what they did. In fact, when you add in those even more poorly disguised arms, the helicopter modes start to look like a total write off. And that's gonna be a bit more of a problem when we get to Victorion. The new parts in robot mode do help me pretend these aren't just the same copter figure for the fourth and fifth time now, and I appreciate that. I don't hate these two, but I wish there was more to them I could like. Anyway, I'm gonna go flip a three-sided coin to figure out who to review next. See you next time! 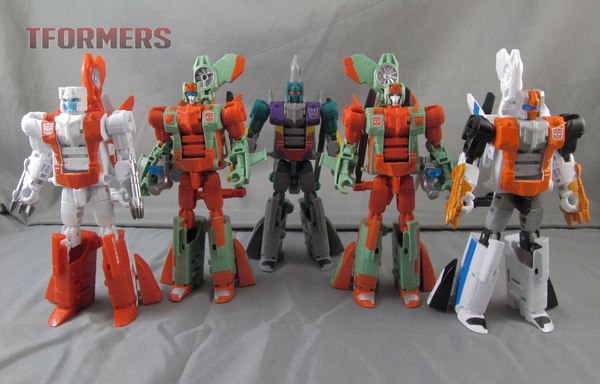