Best for last? Oh yes, so very much. Which is a fantastic accomplishment since this is the one and only figure in the set that does not have even one new part added to it. But you know, sometimes retools are really just a crutch anyway. 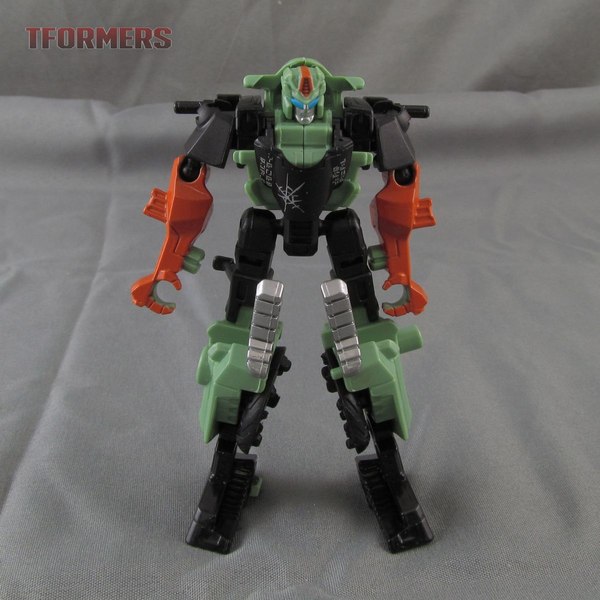 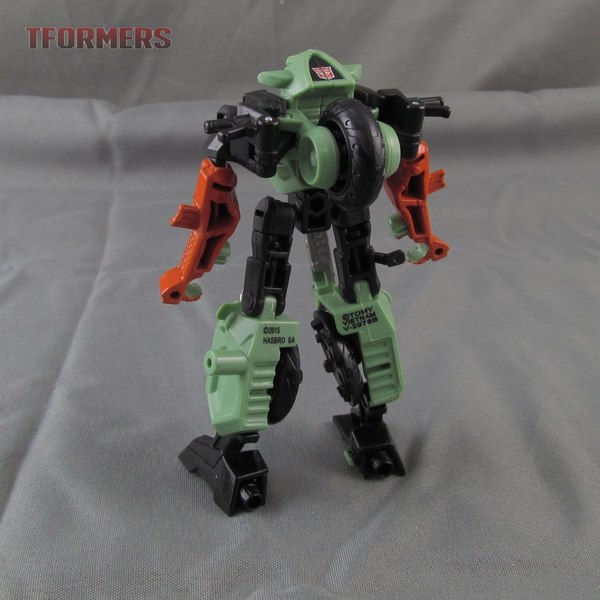 Let's come at this a little different. I want to talk about the best thing first anyway, and that would be the deco. Put Rust Dust alongside the rest of her team, and you can right away spot an important difference between them. Rust Dust isn't red and green. This is very important. Rust Dust is specifically green and black, with just red gloves. This keeps the team color identity present, but cutting a lot of black in makes for better contrast, and kills the saturation overload of having those two strong colors fighting for prominence. This is, to me, a fully realized color scheme. The deco reads as being properly complete, and the three colors play super nicely off each other. Why weren't all of the toys in the set handled this way? 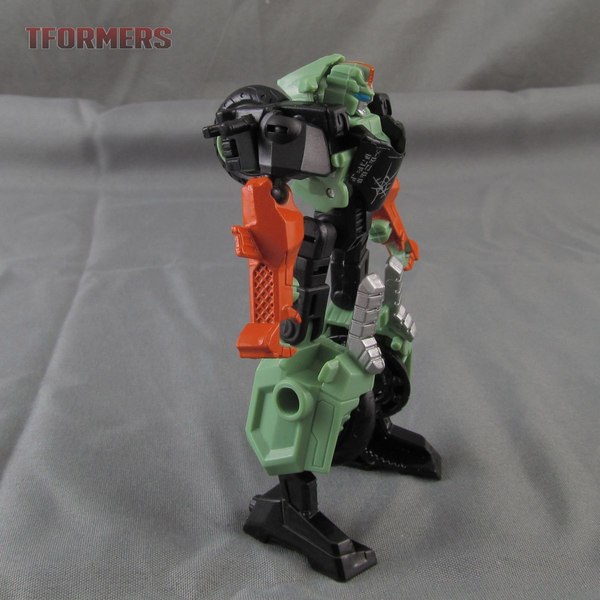 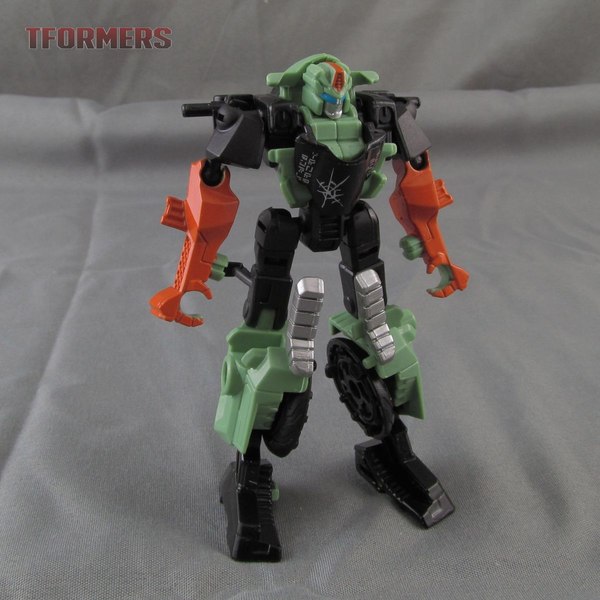 Rust Dust does have a little more red, a tiny dab on the helmet, but that's proving the use. The red is only an accenting color, and that's the perfect place for it. 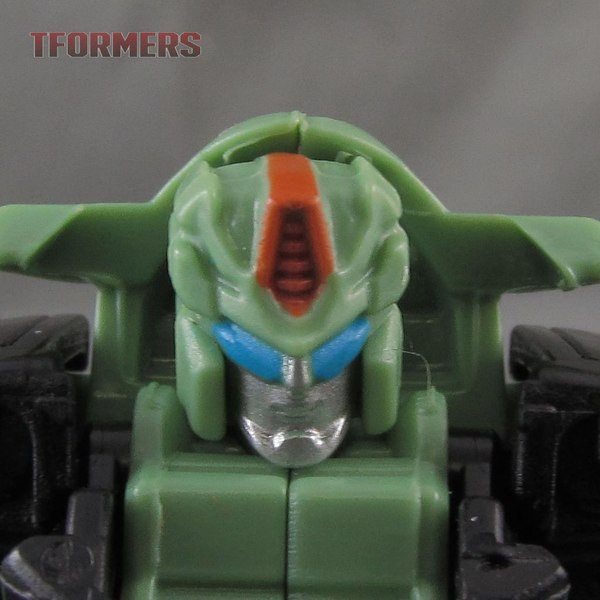 This applies just as much to the vehicle mode and yes, we are just jumping right over to the vehicle mode now as if this is complete anarchy. If anything, the colors work slightly less well in vehicle mode because the red panels look more out of place than they did as gloves for the robot. But the rest of it is the same. The green and black pair beautifully together. The red needs to be in it somewhere, and it could be far, far worse. 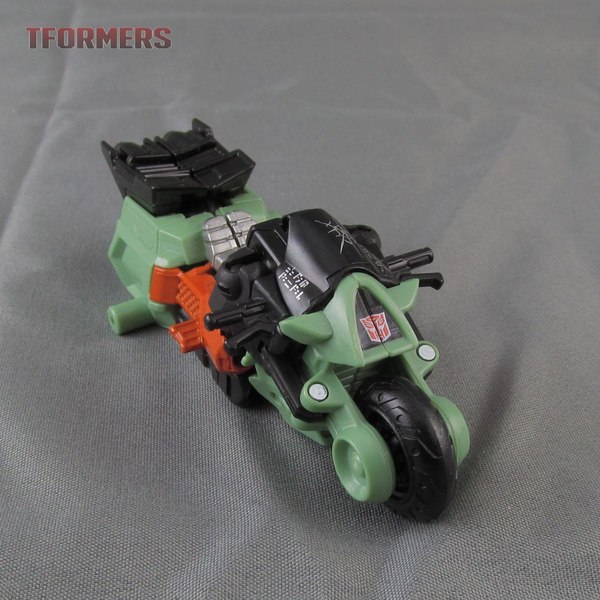 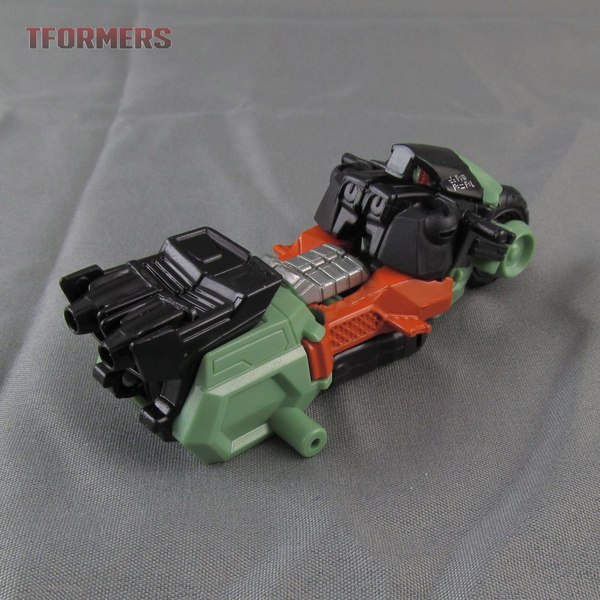 Now, chaotically shifting right back to robot mode, let's talk about build quality. Having chanced upon Wreck-Gar in the wild recently, I think I have all retail uses of this mold right now, and Rust Dust easily beats all in terms of parts fit. Rust Dust's head can turn, albeit not very far just by design. But Groove's doesn't at all, on my copy.

The windscreen doesn't tab in for the robot mode at all on Groove, Override, or Wreck-Gar, but does on Rust Dust. Override's and Wreck-Gar's legs are really hard to tab together or separate during transformation, but Rust Dust feels great. Joint tolerances are good too. This mold was of course never very super poseable, with the shoulders on the limited side and the knees not quite wanting to hit 90 degrees, but within those understood limits, Rust Dust's joint all work and hold together nicely. 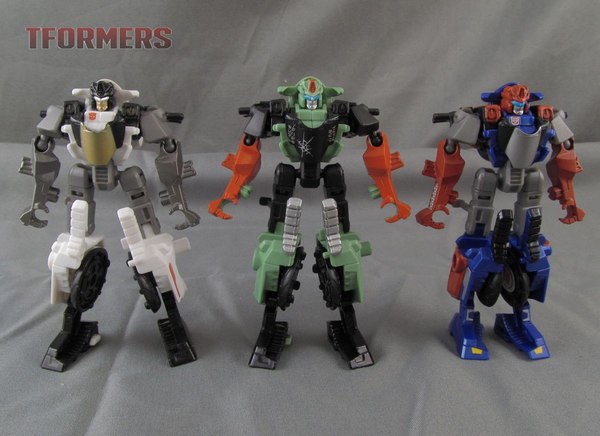 The strength of some of the joints is actually pretty good. She can't quite hold up the full Lightning Bug sword without some strategy going on, but any of the individual weapons are no problem. And it's good, too, since Rust Dust has no accessory of her own. 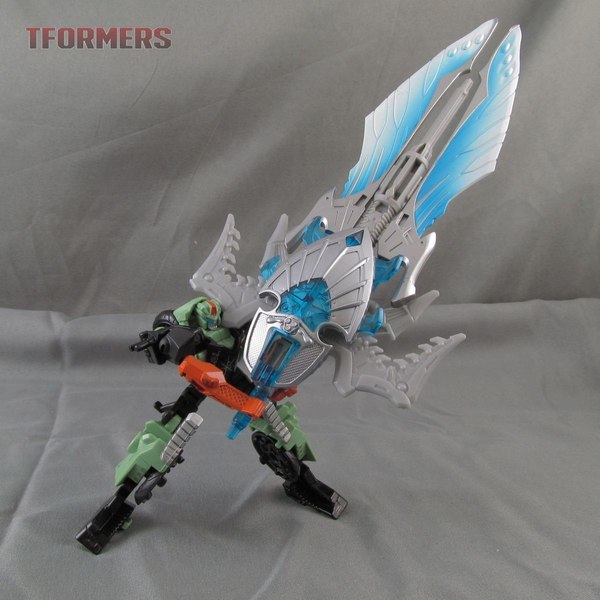 Heck, if you do it right, she can carry around a combiner foot. For being built as it is, you know that's gotta be some decent joint strength! 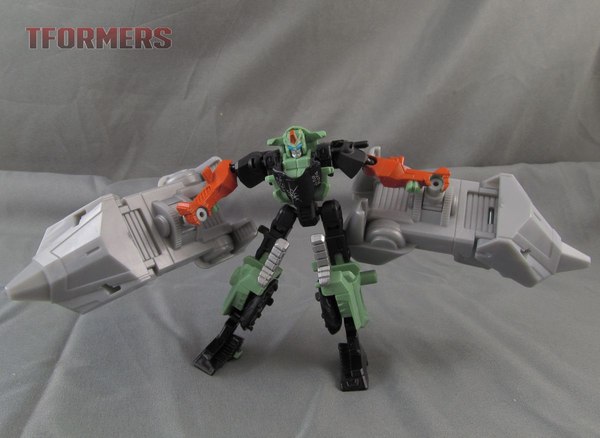 Oh yeah, I nearly forgot. Not only does Rust Dust have the standard printing on the windshield, but she also gets another bit of decoration. A great big crack across the windscreen. Not sure why that was picked or why it was Rust Dust, but I suppose it is something that helps her stand out. Plus it's a nicely rendered radial crack pattern at least! 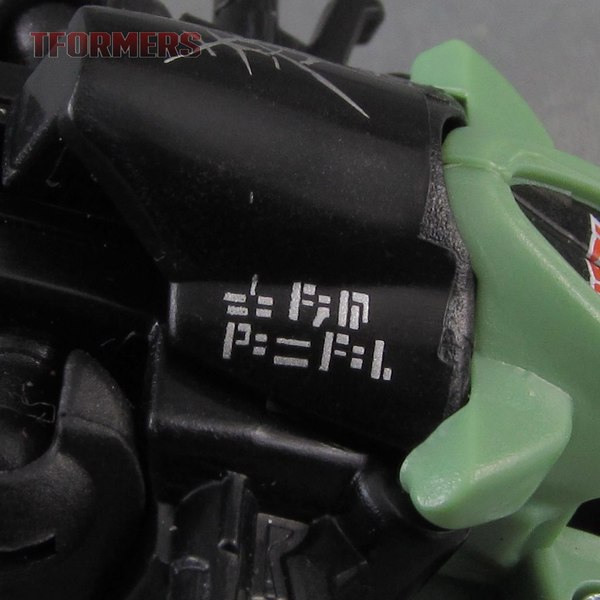 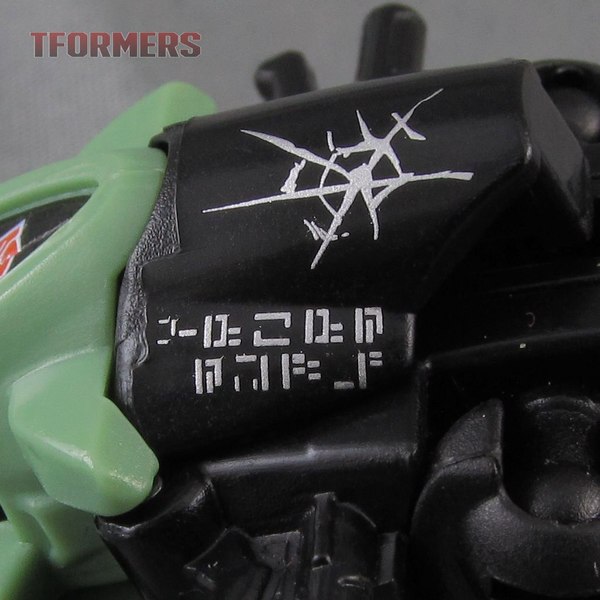 There's not a whole lot to go in to detail with on Rust Dust. She may be the best overall representation of this mold, and she does not suffer for the lack of new tooled parts even among the high degree of retools in the rest of the set. Holding the by far best deco of all the other toys earns a lot of points in that regard. Never buy the set solely for Rust Dust, but you're sure getting something super nice all on its own out of the overall set! 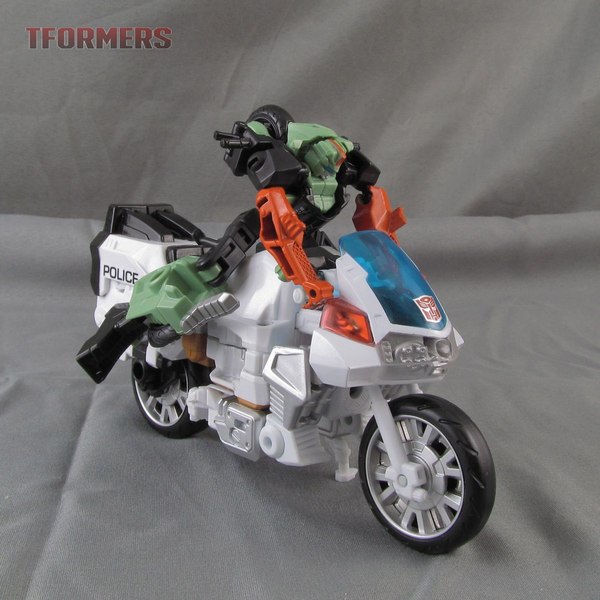