Optimus Prime reaches out to form an alliance with Soundwave, to the discomfort of the majority of both their respective groups. But to confront their common enemy, Galvatron, bold choices are called for. However, as the assault against the Decepticon ship is mounted, no one is prepared for the weapon Galvatron has waiting. All Hail Optimus, Part 4: It's Beginning To And Back Again, written by John Barber, art by Priscilla Tramontano, colors by Josh Burcham. 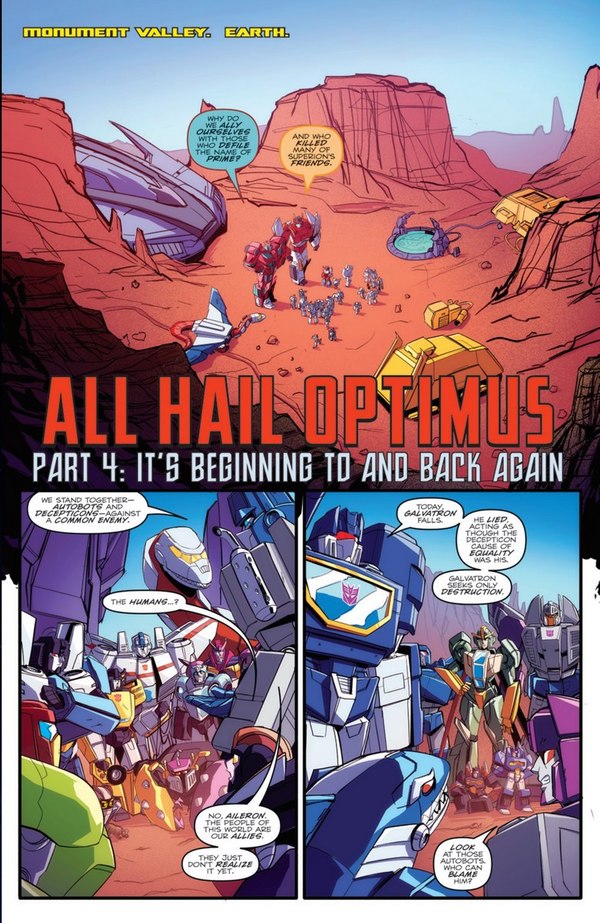 Well, we can see where Aileron's at with things these days.

I'm going to break form here, because I think the highlight of the issue is Priscilla Tramontano on interior art. Her style is fairly distinctive, but is kept to blend with the overall appearance of the series art as much as possible. This issue thus retains a level of visual consistency while also bringing in fun new interpretations inside that framework. Priscilla's art has a little more cartoony energy to it which is very welcome as far as I'm concerned. Characters look energetic, action dynamic. The characters are a little less detailed than usual, which works in everything's favor by keeping clean and easily read visuals. It's these differences in approach, technique, and style that make it really interesting to me to see different artists get their turn at our regular ongoing series, and it's really brought something to this issue particularly.

We also get to see Priscilla have a good shot at showing her skills off beyond just representing the regular cast of characters. While the precise details are spoilery, it's enough to say that some new mechanical design was needed for this issue, which comes out looking quite excellent as rendered. It's a little difficult to give the credit due just because of spoiler concerns, but I'm really happy with this outcome in character design work over similar attempts in the past. Otherwise, the humans present this issue are generally well represented in terms of basic build and proportions, though in some cases the facial features didn't really feel consistent with how they're typically drawn. Some had to be identified by context or even dialogue naming them, which isn't exactly ideal.

The colors this issue, credited to Josh Burcham, really play along with the style of the lines. The bright and clear colors really lend to that mildly cartoonish appearance of the lineart. Burcham is using more saturated colors here, again likely for the sake of staying consistent with the neighboring issues of the series, and on that level it's certainly appreciated. I just can't help thinking though that it might have been fun to have these different style lines finished off by the desaturated style of coloring Burcham has been well known for in his Transformers work in general. It would be quite distinct from other issues of the book, but it might have made for an especially striking combination!

The story I feel wound up just a little bit weak. The crux of the events is something called out from just before the Combiner Wars crossover started, and for anyone who was really paying attention back then, this has worked out pretty much like one might have expected it to, albeit being executed under a different hand. Man, remember that little bit of time when it looked like Blackrock might have actually been a credible villain in his own right? I kinda miss that, I won't lie. But a lot of this issue kind of feels like a Toywatch trying to happen, but I can't exactly run with that because those elements are - you got it - spoilers! The problem is how those elements are in here and not really getting much done within this issue, and so kind of feel like they're just filling space. Basically, it's watching a character play with a new toy for what feels like about half the issue, while no story progress actually gets made on either side of the conflict. And that's where things end up coming off weak to me.

It's kind of starting off with a mislead too, since the whole front of the issue is lining everybody up to jump in and take action and seems like it's going to push this forward a bunch and then we just hit a wall halfway through and get nowhere else. There's also Starscream's subplot that walks in partway through and really also manages to do nothing at all. Starscream wants to tie Optimus Prime's hands, but it doesn't feel to me like the wrenches he's thrown in are actually influencing how Optimus is behaving at all. And even while the main battle of the issue is happening there's a second battle going on which I honestly forgot to even refer to at all because that's how little it seems to matter to the issue. It's so weird, because on paper (...no pun intended) it seems like this issue is packed with action and things going on. But when you get in there and read it, you come away feeling like nothing happened because the events either feel unimportant to the narrative itself, or because there's no result given to it so it's just kind of going on and you have to hang out and see if it'll eventually matter. Next month. None of it is an effective cliffhanger, it's not keeping me on the edge of my seat to see what happens next. It just stops and feels like it's breaking its own momentum.

One positive I have to add here is Aileron, though. She's actually getting some decent character development with each issue. Starting out as being rather in awe of Prime's status and ready to follow him blindly, now because of her friend dying at the hands of the people Prime is trying to forcibly protect, her attitude is shifting, and pretty quickly away from being compatible with what Optimus is after. The visions Optimus had a couple issues ago are starting to become easier to see their roots taking shape, including a rather antagonistic looking Aileron. I'm digging this slow burn and generally natural feeling build up of these things when I can see the pieces coming together bit by bit and follow the idea as it goes along. And I guess when it comes down to it, it always goes back to the roots of this book. It may not be robot politics as such right now, but the spirit of that kind of story telling is still very much alive and is keeping me locked on to this series.

Finally, covers. And I think I like the standard cover the best of the bunch. It's very stylish and eye catching. While the subscription cover by Casey Coller and Joana Lafuente is quite nice on all the technical levels, it just feels a little too unimaginative. Priscilla Tramontano did the retail incentive cover for this issue, which is a very nice tight shot of Arcee with swords ready. I dig it as a piece of art quite a bit - it just isn't doing a lot for me as a comic book cover, I suppose. But hey, you gotta give some excellent art to a main cover once in a while, right? Don't want to leave the general readership out all the time as far as excellent cover art goes, after all!