Our next stop with Titans Return Fortress Maximus is a look at the smallest piece: The Titan Master itself! 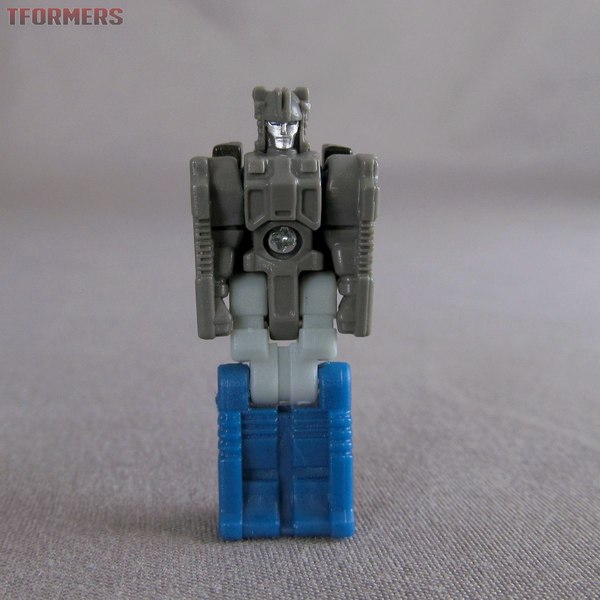 Despite getting to see several of these in a display case at Botcon, I'll admit I was surprised getting Emissary in hand. The smallness is really shocking. 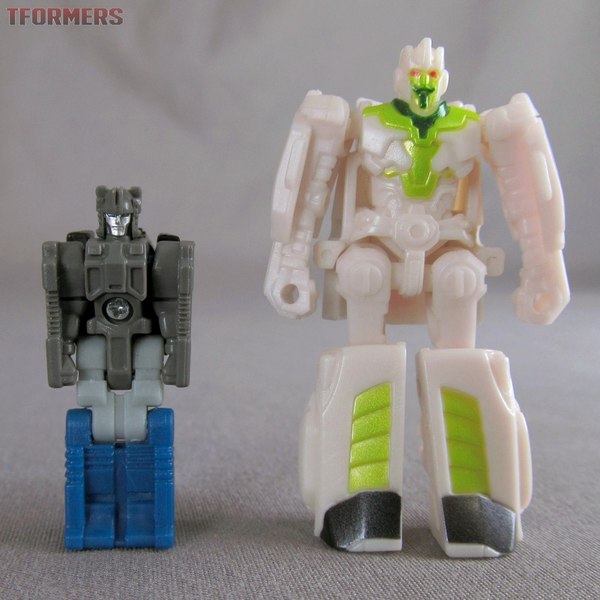 Equally shocking is the detail present on something so small. The body isn't super detailed, just having generic panel lines and such. But check out the face. The head itself is within a hair of 5mm wide, and the face itself must be about 3 mm across, but it has such sharp sculpting. Not to mention the precision of the blue paint in the eyes. It's incredible! 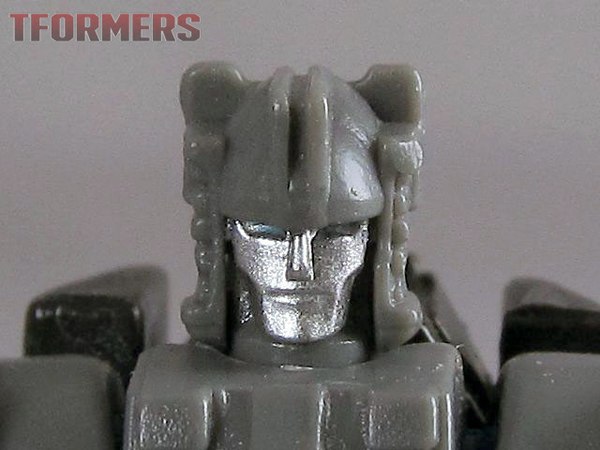 Of course the counter to this is the robot face backpack. Emissary has it less bad than it could be since there's not super distinct facial features there, but we know what it really represents. 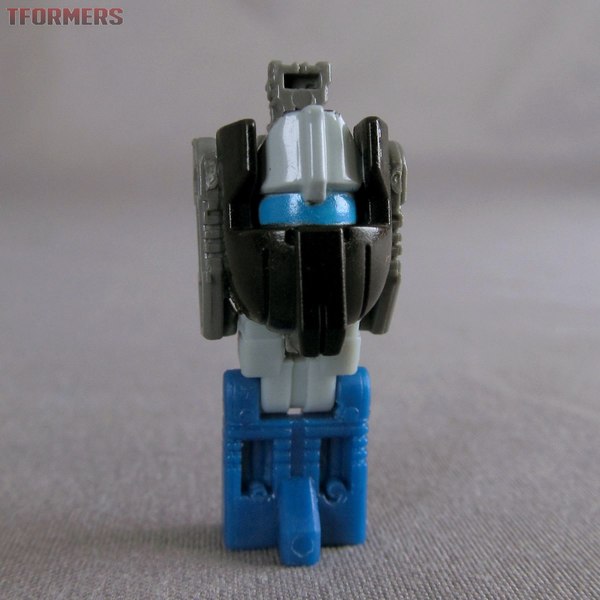 There's an okay amount of poseability, starting with a neck ball joint. Ball joint shoulders are next, and in both this and the neck there's a little lateral movement possible, but largely these act as swivels. 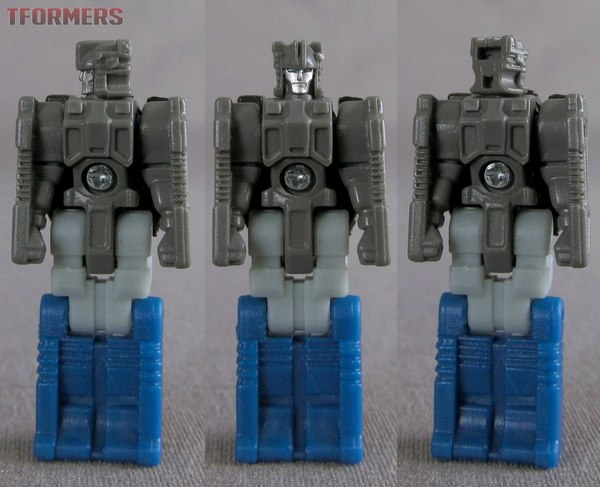 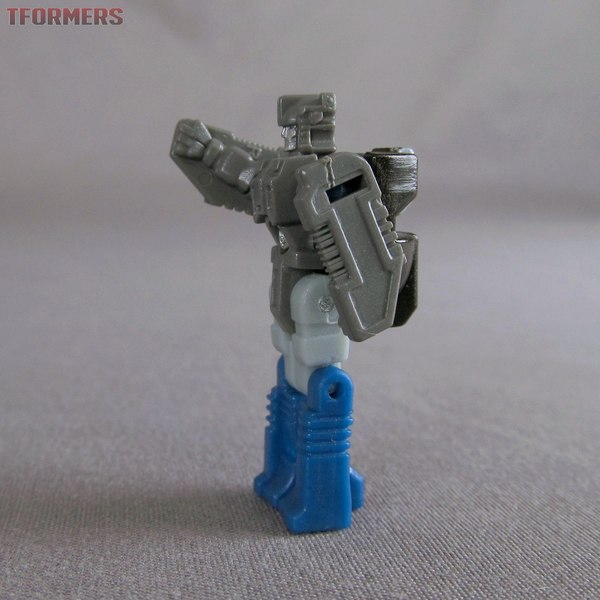 The legs are hinged at the hip and knee, though like classic Headmasters can't move independently. 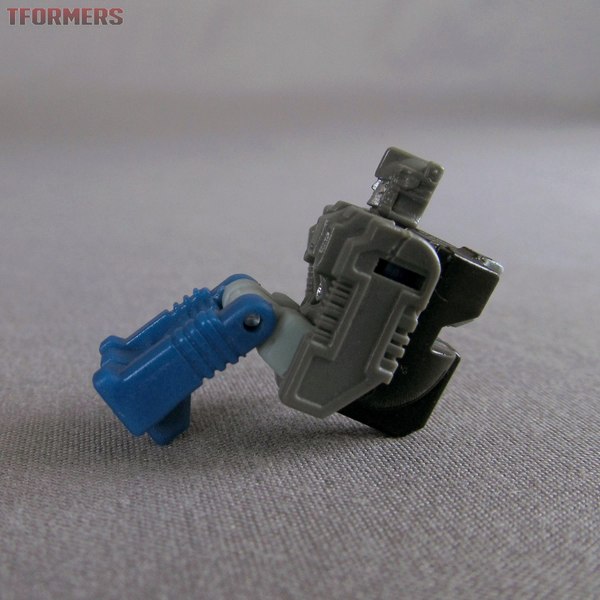 Titan Masters in general have these little ports on the sole of the foot to facilitate posing them on larger toys with some stability. 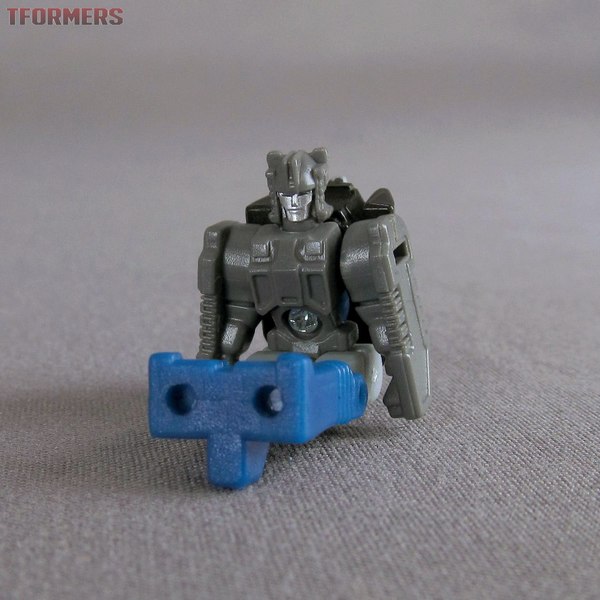 Fortress Maximus has many pegs for this purpose, as will basically every other price point. And helpfully I do have a toy besides Fortress Maximus to demonstrate this with! 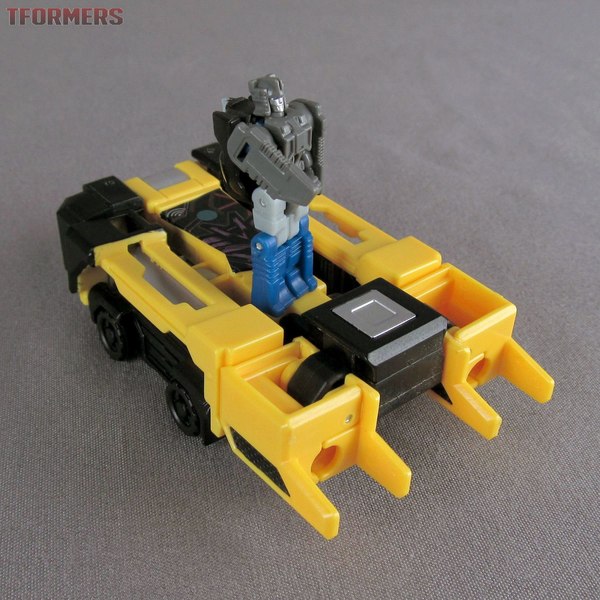 The possibility of having Titan Masters riding on a flying Buzzsaw or Laserbeak is a fun one, and makes me hope for an eventual Sunder recolor for the Autobot Titan Masters. 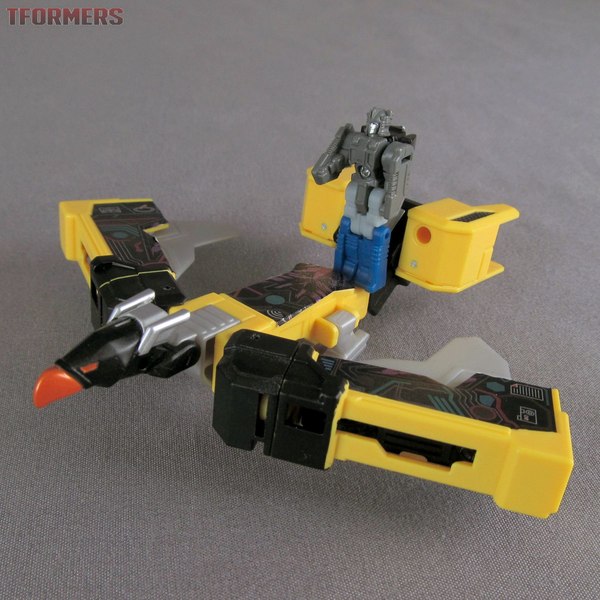 But the expression of this play pattern I like even better is when the bodies have pegs placed so the Titan Master can be posed near the neck socket. And that option is provided for in this instance too! 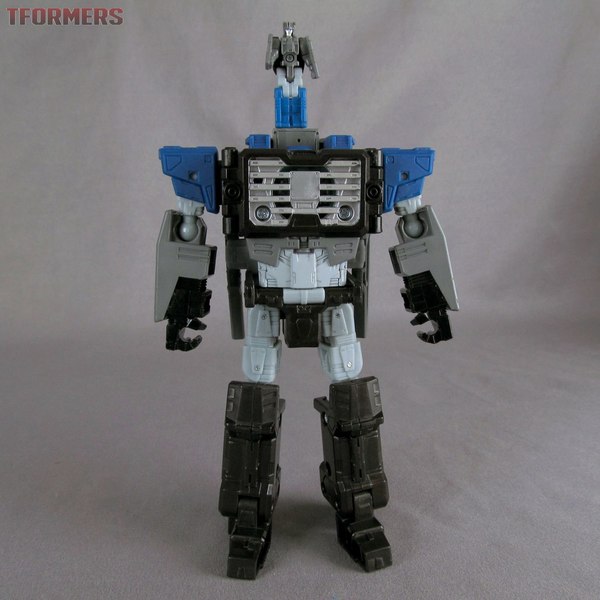 We know already that Titan Masters are getting reused in different places with the robot faces changed, which is an understandable thing to have happen. But say you start wanting to customize Titan Masters for one purpose or another, what kind of options are there? Actually, this is pretty excellent. So you just have to loosen this one screw. 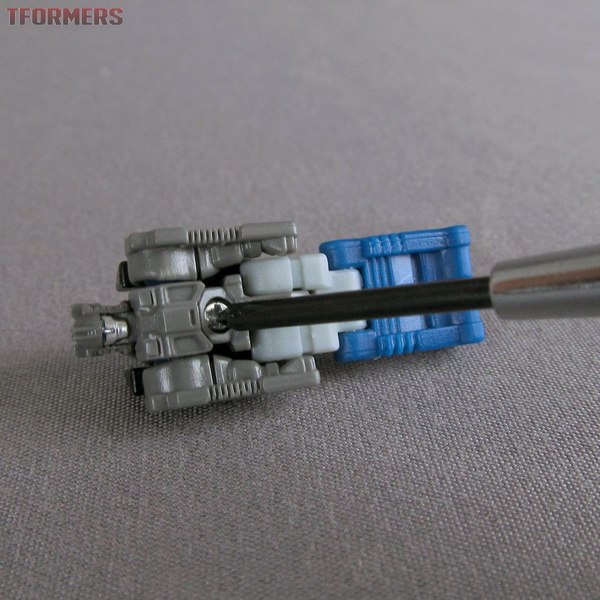 The body then breaks down in to a few components. 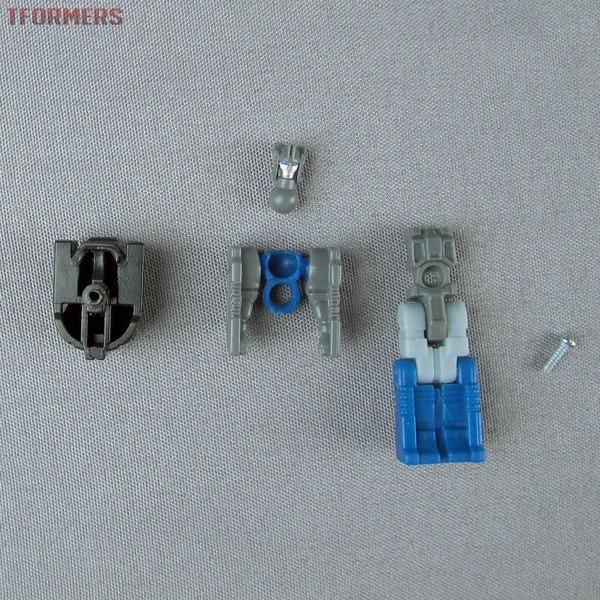 The large robot face is self-contained, and so it should be easy to switch a robot face from Titan Master to Titan Master. The neck socket and shoulders work around a central part that can also be easily transplanted. Or you can pop the arms off at the shoulders directly if you like. The only thing not easily disassembled is the legs, which are pinned at the hips and knees. With a big enough pool of parts, there's a lot of flexibility to be had in constructing Titan Masters. About all you need to worry for is color matching. And at the manufacturing level, that's not even a problem.

Emissary is a little bit shorter than Voyager Brainstorm's Headmaster. The main difference in height seems to come from the legs, since the fundamental elements are all pretty much the same. But I'd say Emissary - and the Titan Master concept in general - is much better realized. For one, Emissary doesn't have the huge slab wings with arms basically printed on the inside. The proportions are better, and the sculpting sharper. 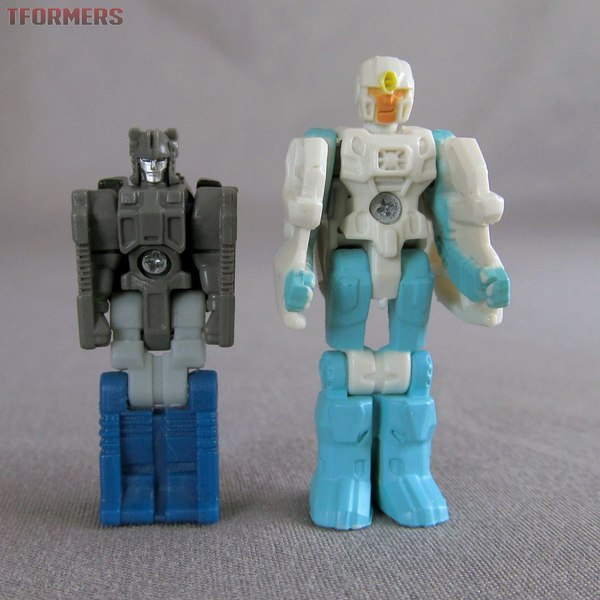 Arcana, or whatever you want to call Brainstorm's Headmaster, served well enough as a proof of concept or test piece, but the Titan Masters have definitely stepped things up where needed. 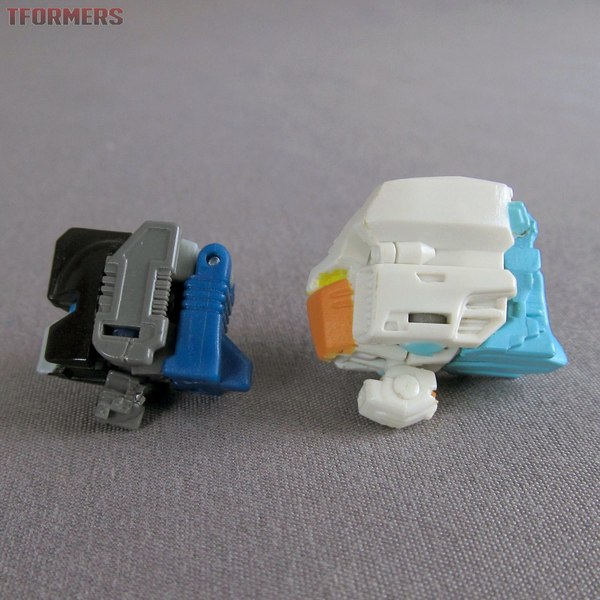 Both because of sizing differences and a mechanism change, Arcana can't attach to any Titans Return bodies. Likewise, Emissary just sits loosely on Brainstorm, not locking to the body in any way. 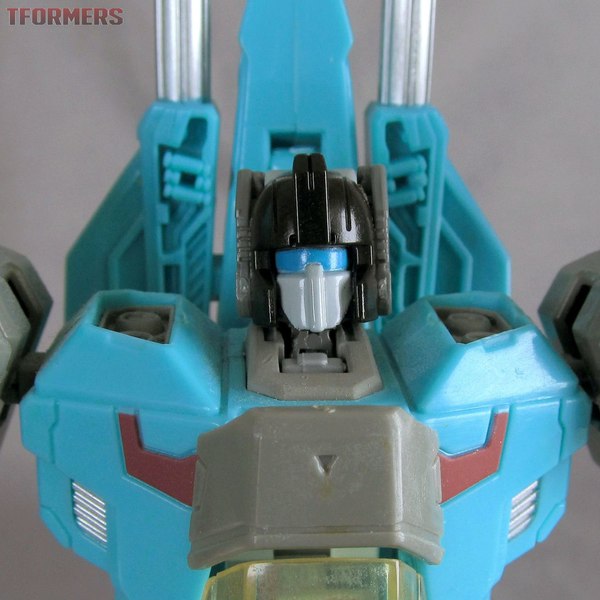 On the unofficial side, you get a similar kind of result. Function X Headmasters are a little bit bigger all around. The quality of the sculpting is more similar between them, though. Anyway, Emissary can rest inside a neck socket but doesn't engage, and a Function X head is simply too big for a Titans Return neck socket. I don't have any available to test with right now, but I expect the result with a G1 Headmaster would be similar. Titan Masters are just a lot smaller, leading to a general incompatibility with other previous systems. 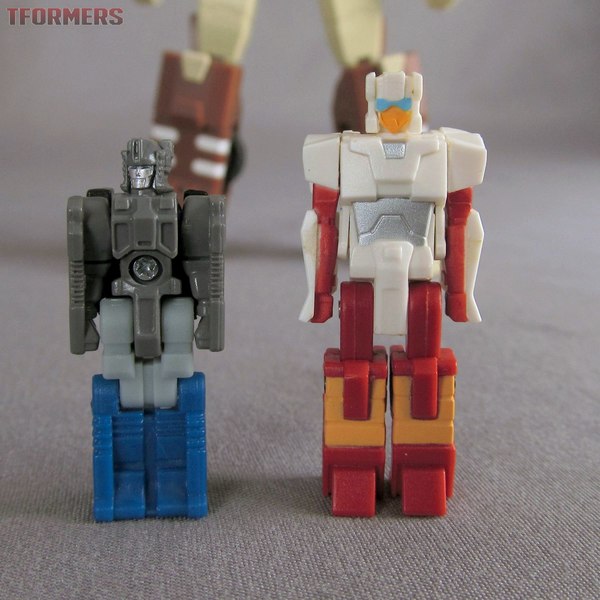 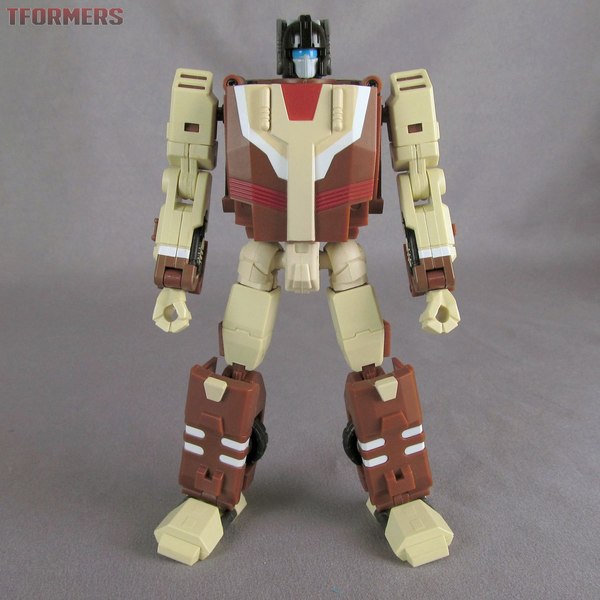 I'm quite satisfied overall on a concept level now that I've been able to handle a Titan Master. They're not perfect, maybe, but the problems are really more to do with the interaction with the larger bodies. Something which we'll go over in the next review. But right now I'm really eager to get hold of some of the Titan Master vehicle packs. These are solid figures for being so tiny and I think they'll be a whole lot of fun with a fleet of little cars and jets and dragons and tractors to interact with around all the other bigger toys. Being the underpinning of the line, these are the thing that needed most to go right, and I'm glad to see they have.