Moving up to the next stage, now we take a look at Cerebros. The connection for a Titan Master is pretty simple, streamlined notably since Voyager Brainstorm. There's just two clips on the sides, and the Titan Master just pops in. (Frequently triggering the electronics in the process.) The connection is secure enough that it will hold all the weight of the body under it. 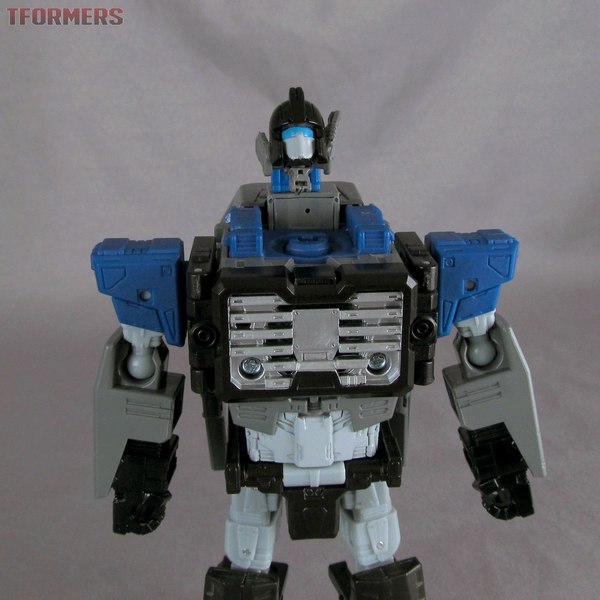 The Titan Master's own neck joint provides for articulation here. That mostly means a swiveling movement. You can get a bit of up and down too, though in a more general application this is bound to vary somewhat depending on body and head shapes. You'll also find side to side tilt, but that's not the joint at work. This is actually the head pulling up on one side or another inside the socket. By itself I don't think any harm is being done, but it's a symptom of something that can and will be a problem. While the head holds in the socket well and won't pop out unintentionally, there's an amount of play in the connection. Cerebros isn't too bad about this, but from early reports, some other toys look a bit like bobbleheads. It's a pretty good simplified method of attaching Titan Masters that shouldn't see mechanical issues like the first runs of Brainstorm were well known for, but this is still not a perfect solution.

So Cerebros overall is a larger than average figure, even a little bigger than, like, 2010 era Generations Deluxes. And of course he stands pretty tall over more modern Deluxes. Being tall and chunky, Cerebros is visually impressive alongside other figures. It stands out in a positive way. Reportedly, a design interview brings this up and it was an intentional choice to help show that Cerebros is the leader of the Headmasters. I think that works. 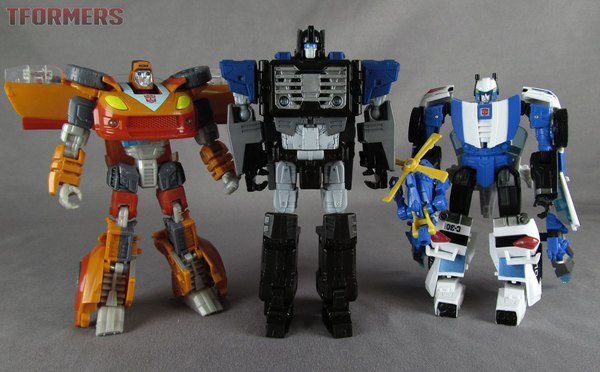 But for being bigger than usual, the articulation is a bit on the simplistic side. The shoulders are swivel and hinge combinations. The outward swivel feels just a little bit looser than I'd prefer it, but it does support its weight at the least. 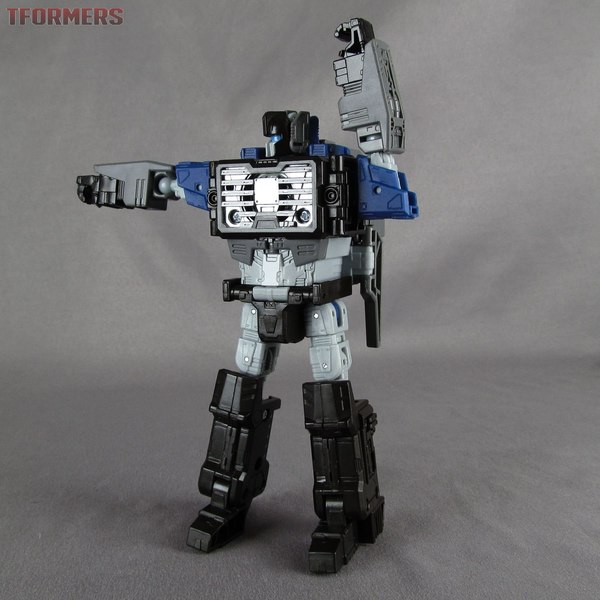 The elbows are just big ball joints, bending just short of 90 degrees. And that's it for the joints in the arm. It feels a little... well, it feels like it's missing something, at least a wrist swivel. 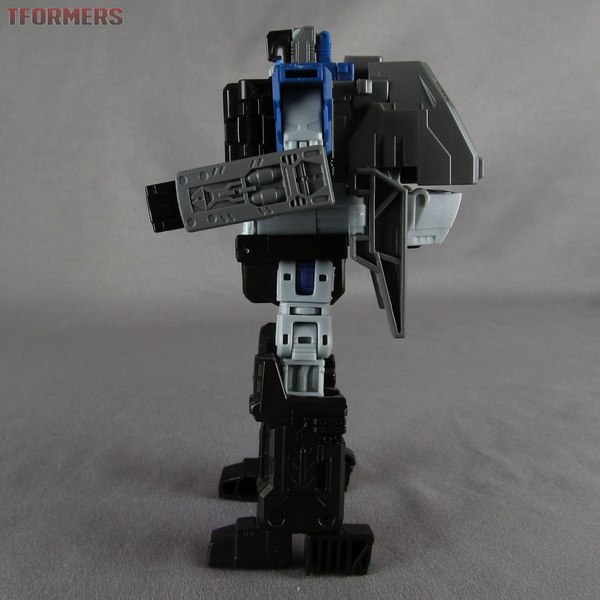 The hips are universal joints with pretty good range. The waist can block the range of motion a little, for instance you're not getting the legs raised forward to even 90 degrees. 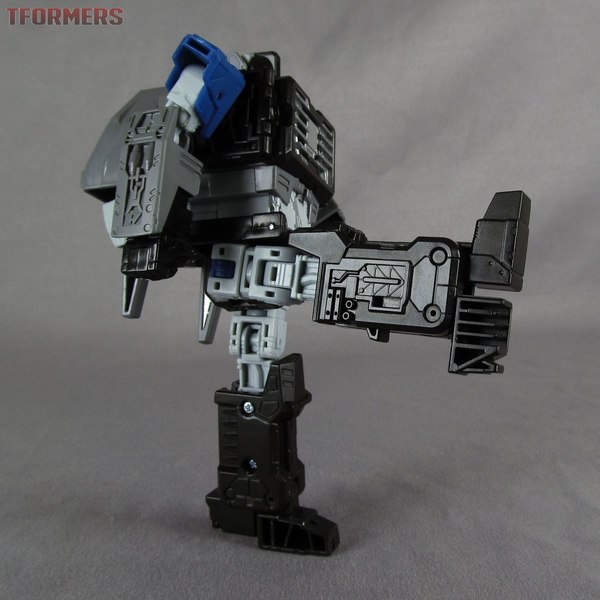 But the sideward movement is a little better. 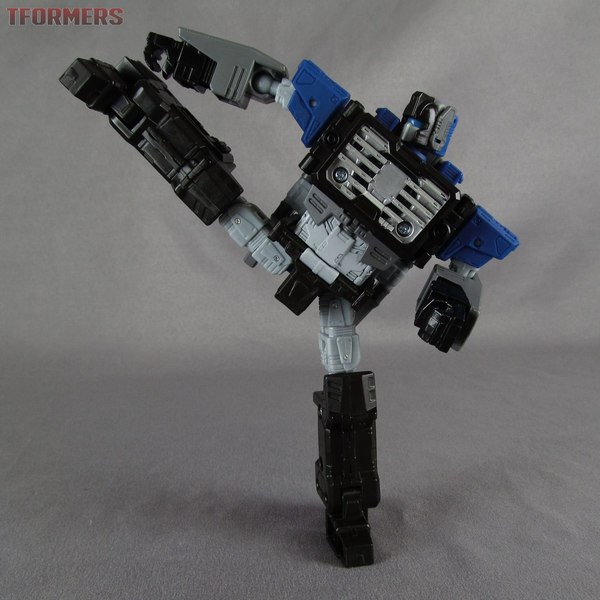 There's a hinge going out to the side just above the knee. Not necessarily good for posing most of the time, but there's occasions it can help. More important, it's a stiff enough joint that its presence won't aversely affect the legs normally. And the knees come to a solid 90 degree bend. 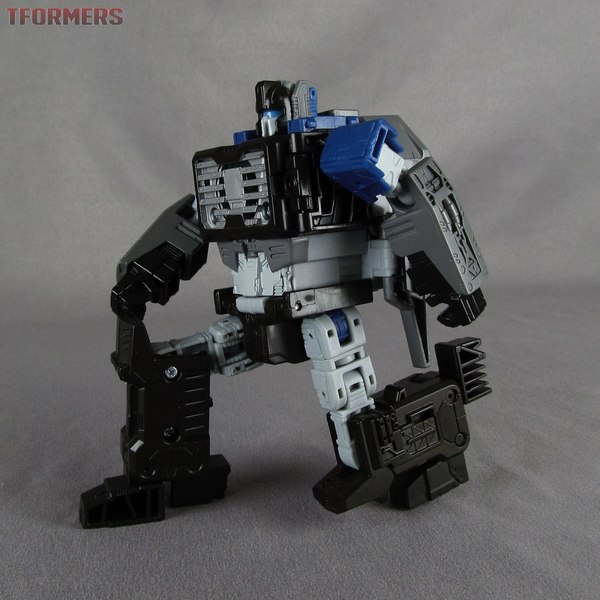 I'm really of two minds here. One being the feeling that not needing to fit in with regular price points and all, maybe Cerebros could have had a little more articulation. Some double joints, maybe an extra swivel. But at the same time, nothing it has to do requires them at all. It's just... Cerebros doesn't really transform in to anything on its own, so maybe making it more super poseable might have been a nice thing to do for its individual play value?

Anyway, the toes are hinged, but for transformation purposes only. They're not really any use for posing the way they move. On that note, mind how you balance Cerebros. The heels are offset, so if you're counting on the edge of the foot to carry a dynamic pose, you'll probably have to adjust a bit to make sure the heels are actually doing anything to hold up the toy's weight.

The deco is a bit basic, but it works. The silver on the chest venting looks nice, and the bits of blue around the collar and shoulder covers give some nice color balance. The consistency of the light grey paint on the torso is a little bit odd. It looks thick even though the details beneath don't seem dulled. I figure it's because it's super glossy. Much the same as the black paint on the wrists and hands. It stands out in a not great way. 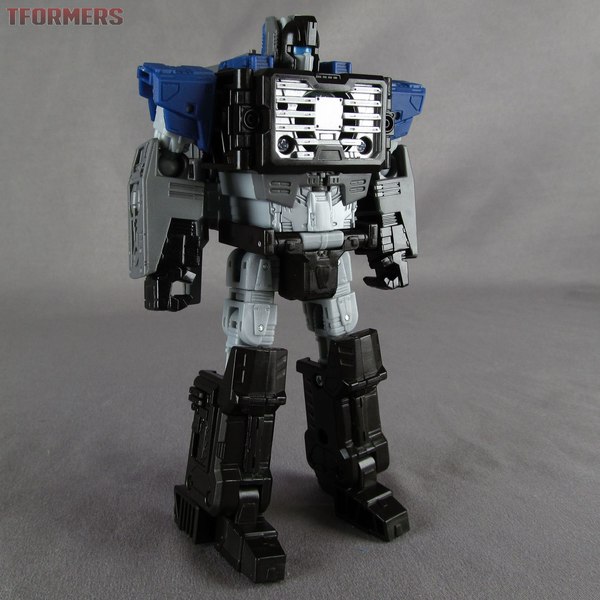 Let's talk about the electronics. The transformation sound has a hair trigger. If you move the backpack cap just a little bit and let it return to its resting position, you'll trigger the transformation noise. It actually becomes really irritating really fast.

In terms of things better controlled, you can press down on the head - or anywhere on the blue collar, really - to trigger a series of sounds specific to Cerebros. There's one sound I'm sure is the photon torpedo launch noise from original series Star Trek.

The interesting thing I've discovered is that the sounds are very random. It's not just the sequence, but with single presses it'll sometimes play combinations of the sound effects, so it's hard to actually say how many distinct sounds there are. Interesting approach to keep the sound array from getting boring, though! 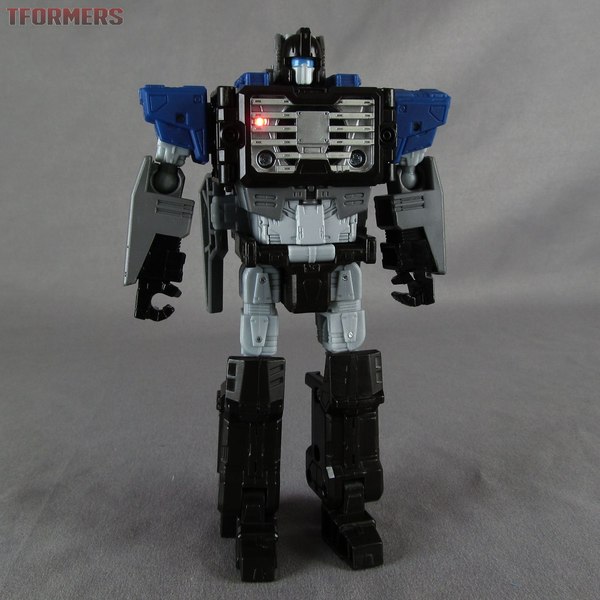 Cerebros doesn't become anything on its own, but it does have to change a little bit to interact with Fortress Maximus. 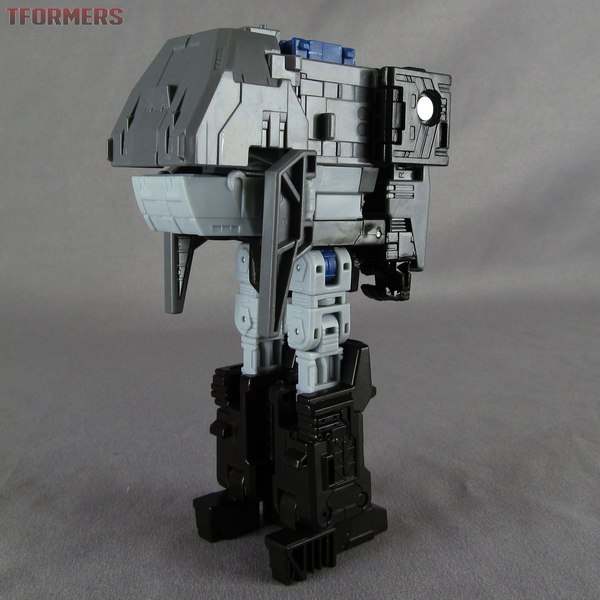 In this form, it's meant to plug in to the tower of the base and ship modes to fill in part of the structure. In my experience, it doesn't distinctly lock in, but it does kind a point of rest and tends to stay put. It can be a bit fiddly, though. I appreciate trying to give Cerebros more of an integration than the G1 toy had, but I'm not entirely convinced by the result. 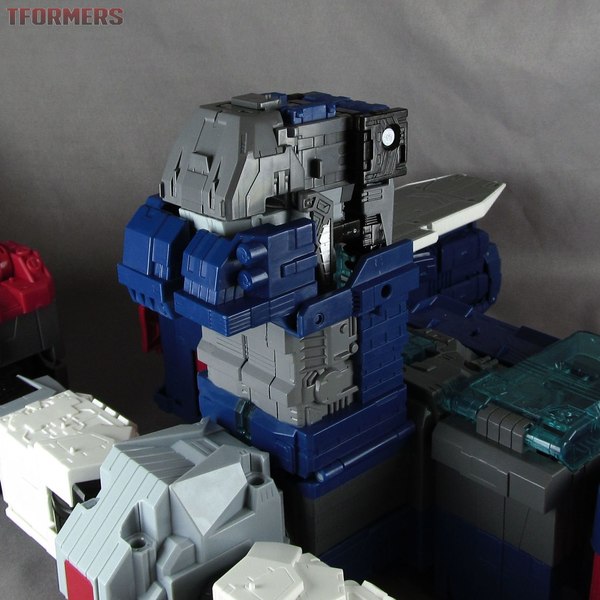 Head mode is more of a transformation. Well, if you start from robot mode. Going from tower mode is extremely simple. You know the worst part, though? The electronics aren't geared to cause the transformation noise when you lift the face cover. That would have been perfect. 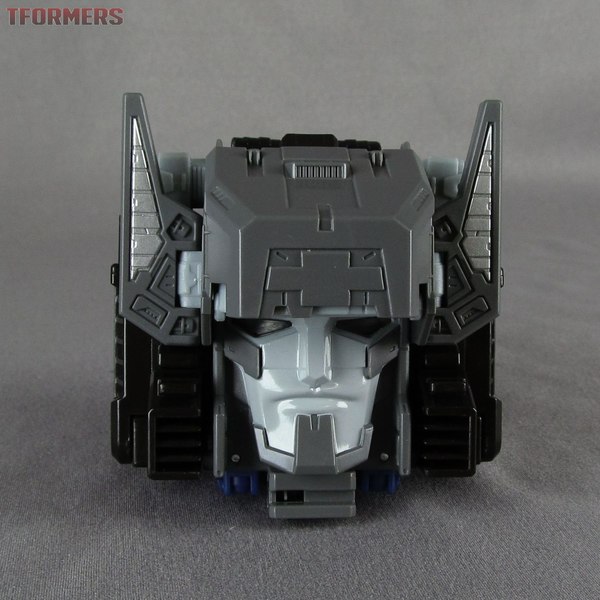 It's a pretty nice Fortress Maximus head. Maybe not quite as tidy as the G1 mold from some angles, but it looks pretty nice from the front. And we have more of the overly glossy grey paint in the face, though it seems like it works a bit better for that, maybe because it's smoother surfaces. 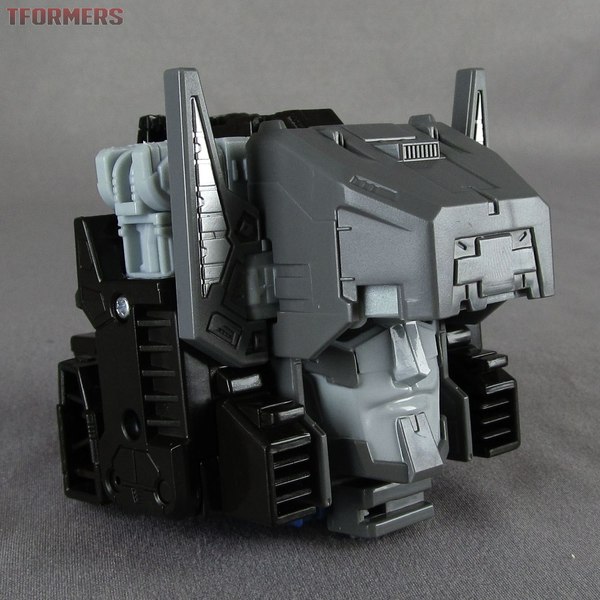 I also have to say, I really like the look of the eyes lit up when the electronics are engaged. It's too bad the eyes look empty the rest of the time. 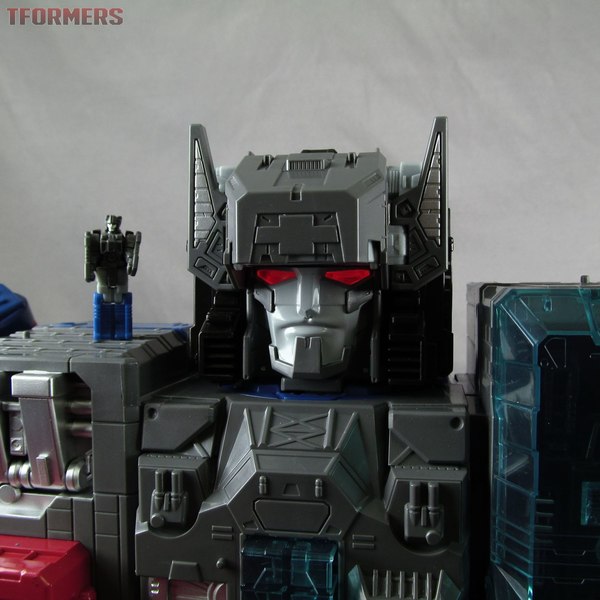 So, does Cerebros need a Titan Master attached in order to connect to Fortress Maximus? No, not at all. The connections are made entirely here at the blue parts. There's a socket so the Titan Master is able to stay attached, but it's not required. 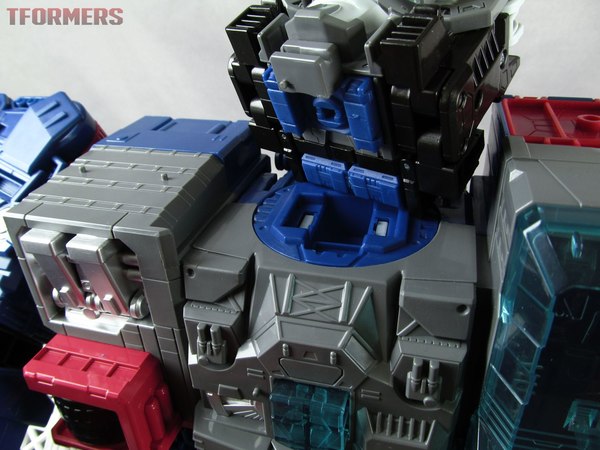 It may not be fair to say Cerebros is a big selling point for Fortress Maximus, since the entire package has a lot of new to it. But as a major component of the toy overall, it almost feels like it comes up a bit lacking. It is very visually impressive alongside Deluxes. Kind of like the distinction between Deluxe Beast Wars toys and the defunct Mega size class. But it doesn't have a lot that it can do on its own, and even its capacity to pose is a bit on the limited side. Maybe part of that comes down to housing the electronics, I can't really say. I just know that I feel like I'm looking for a bit more out of this than what's here, something to really help break it out of being just part of a bigger toy. And speaking of that, it looks like it's finally time to get our head on.