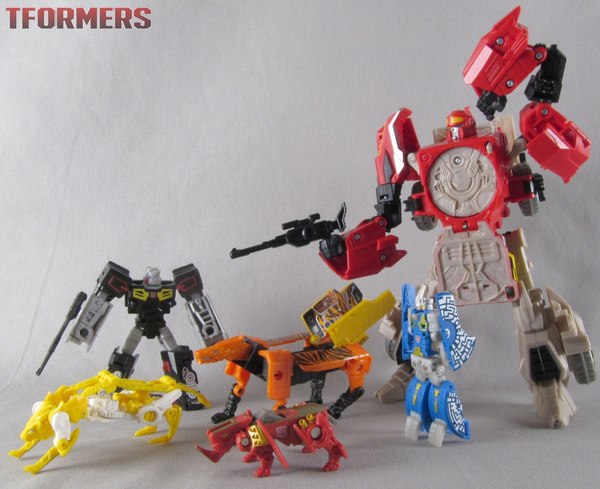 Stripes is a "Deleted Scene" figure from Transformers: The Movie. One of the early-draft Autobot cassettes, his slot in Blaster's arsenal was ultimately taken by... Ramhorn. Yes, originally Blaster was going to have a Lion and a Tiger. No word on bears, though. Oh my. 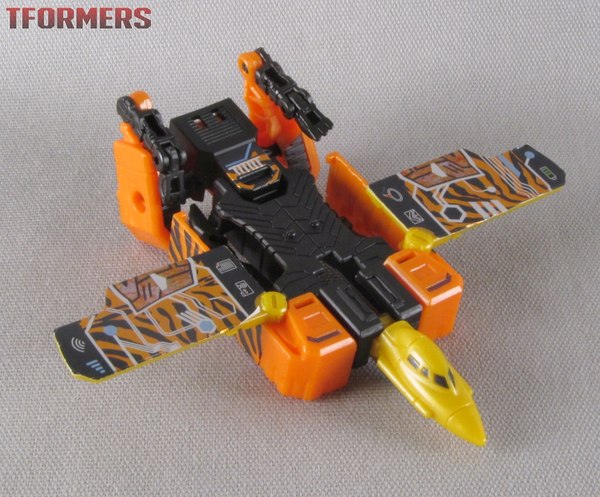 Speaking of Oh My, here's the jet mode the figure is packaged in. I've reviewed my share of rectangular jets lately, and this one is definitely one of them. 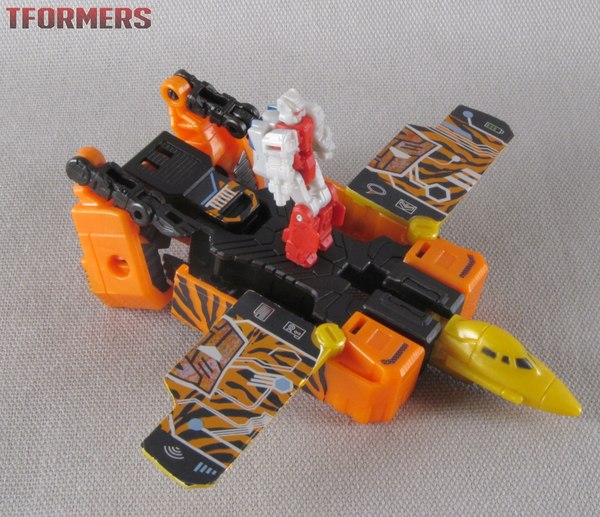 The pegs on top for Titan Masters to stand on are very shallow, but work better than you expect. It's a pretty solid hold! 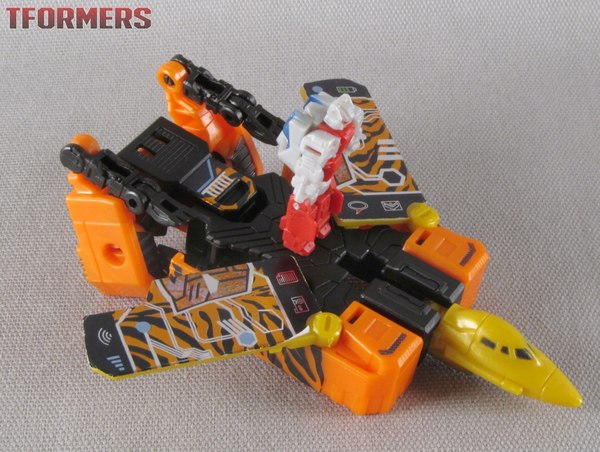 The wings being designed to stick straight out really does bad things to an already unbecoming silhouette. Sweeping them back helps, but it's still got cat foot tailfins and an incongruous gold nose. But it doesn't affect the Titan Master pegs at least! 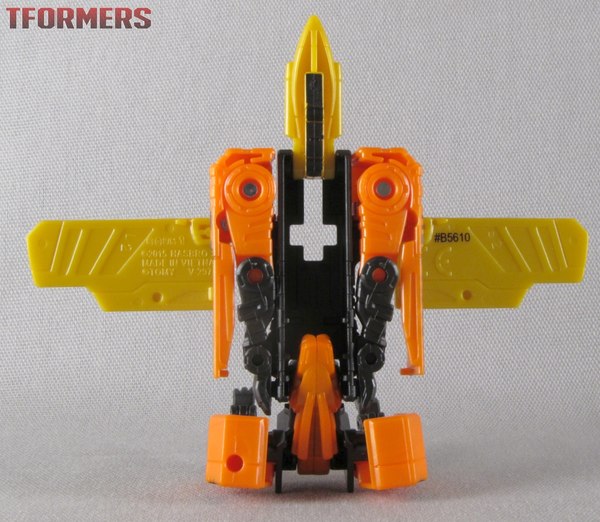 The nose isn't the only instance of gold plastic, but the foil stickers for the phone mode's screen cover the rest. It actually looks better from the underside, doesn't it? Much more balanced. This is a super-busy toy, and despite the pleasing bright orange it's not a G2 kind of busy. It's just all over the place.

Okay, let's make a kitty. Once you move the forelegs and jet wings fully out of the way, this is pretty easy to do. Don't miss the stubby little tail. 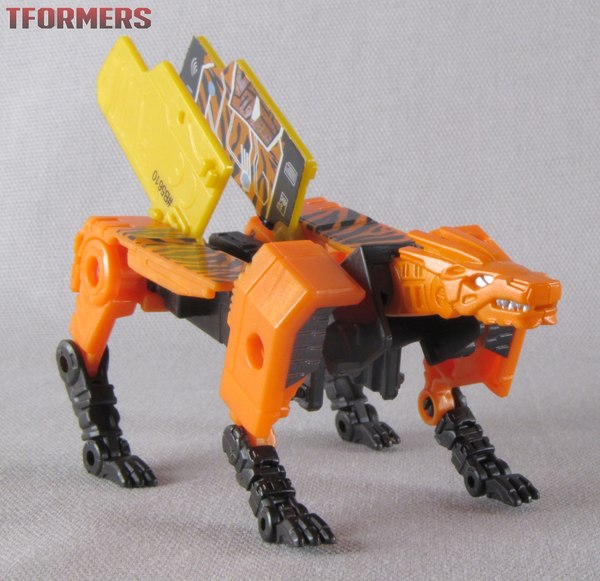 And here's Stripes! ...wait, that's not a very good angle. 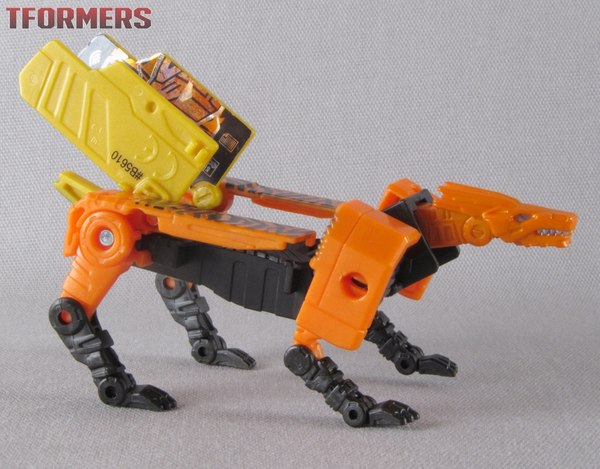 Uh, neither is that. 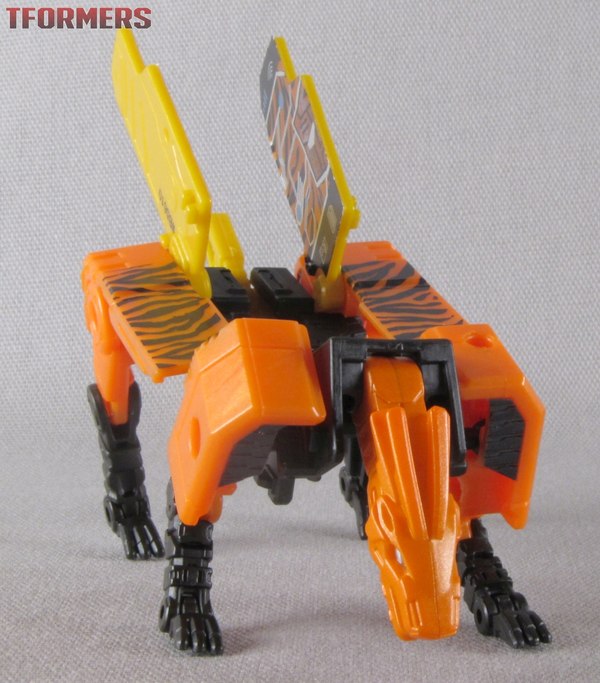 Neither is... okay, you know what? There are very few good angles for Stripes. The main culprit here are the sides of the phone mode, which make him unreasonably wide. If those weren't there or folded in some way, it'd make a reasonable cat. Heck, even angling them upwards to match the wings...

The original Stripes toy combined the Ravage mold with Steeljaw's winged side weapons to make a new character. Stripes' has wings built in... which means Ravage will too. Yep. 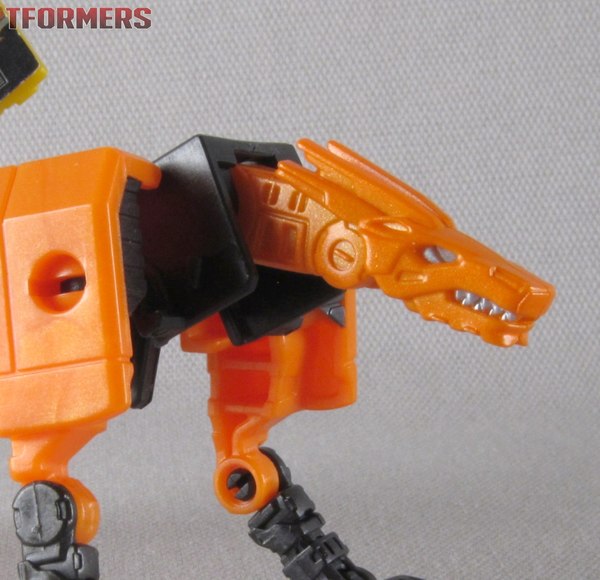 But on that note, why isn't this Steeljaw, anyway? Ravage uses a different headsculpt, and this is reasonably lion-like. Eh, it'll probably come back to haunt us as Steeljaw again later on.

Articulation isn't great either, restricted by the locking tabs for the various modes or by the infernal phone sides. The rear legs are just all-around bad, with inexplicably limited midjoints. You can manage a few catty poses though. One of the forelimbs on mine has a habit of popping off for no reason.

Now it's time to phone a cat. Again, moving the forelimbs first and keeping the wings pulled back all the way are the keys to avoiding frustration. Sliding the forelegs into the phone correctly is a little tricky - especially on the side of mine where it pops off. The rear paws are designed to lock down but often come off their pegs, but it's usually no harm done. 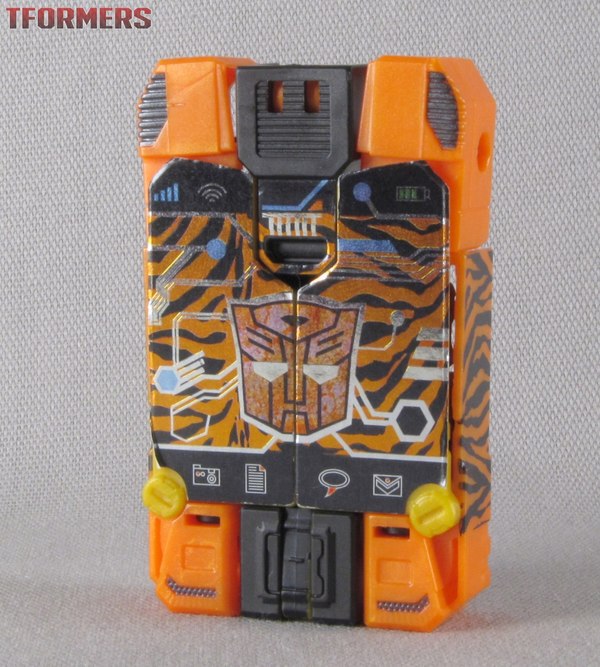 It's a rectangle! As with the other Titans Return "cassettes," Stripes becomes a smartphone that you can jam into the chest of Leader-class Blaster or Soundwave. Luckily the shiny screen wasn't quite as hard to shoot as I thought it would be. I do like the tiger-stripe wallpaper. Think they should've topped off the battery before they committed the screen to foil, though. 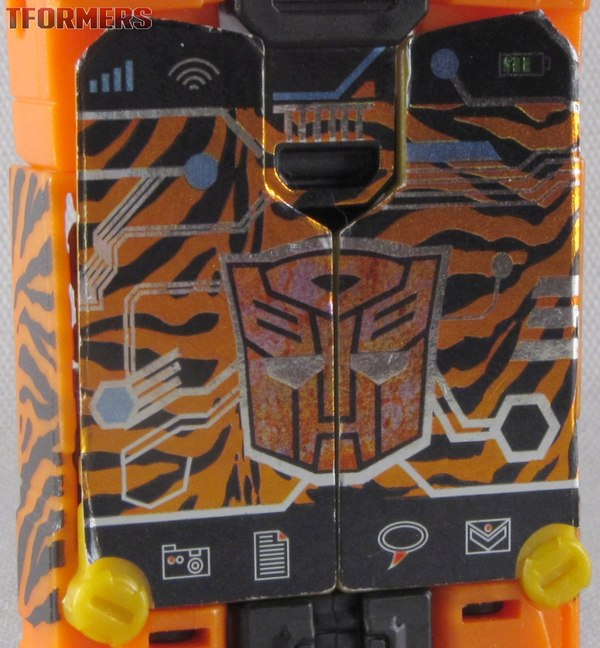 The stickers that comprise the screen are going to be a problem, especially for the secondhand market. In fact, they're already a problem, showing serious war just from the process of reviewing and transforming the figure. Carded examples of the phonebots are probably going to be worth a bit in the future. 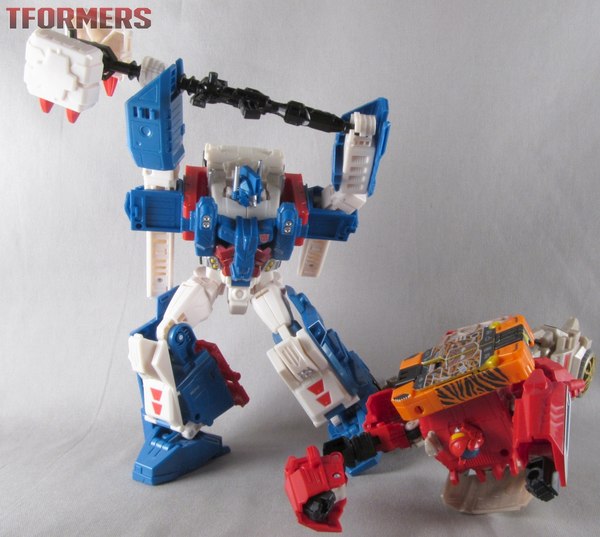 Stripes is a letdown on a variety of levels. None of the modes are very attractive, with the smartphone mode being the best of the lot and simultaneously the one I care about the least. It can be adjusted into an okayish but VERY busy jet, and nothing's going to make the cat mode more sleek. And sadly, it's going to work even less with Ravage, leaving him with a pair of ugly wings he doesn't need. Considering Stripes is also a character that didn't formally exist until the 2000s, I don't think it's going to hurt most people to skip it.