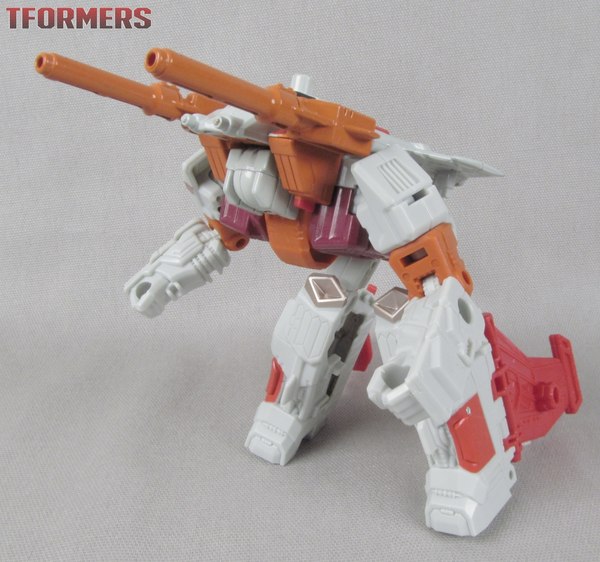 And now we get into the single most remolded figure of the Computron set. Though there is a bit of a tradeoff for that... 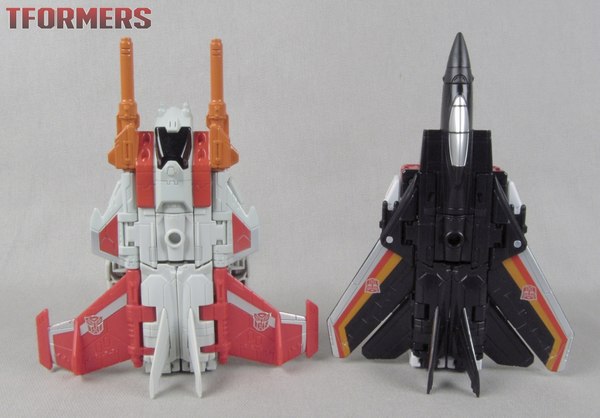 Strafe is based on Combiner Wars Wave 2's Air Raid, using about 55% of the vehicle mode parts. It just looks like less because they only kept the most boring ones. We've got six reused parts: the leg backs, the figure's back, the tailfins, and the first hinge on the nose assembly. The nose, along with the small and large wings, are all new. The new parts do a great job of turning the figure into a modernized version of Strafe's G1 toy. There's quite a lot of nice detail here. 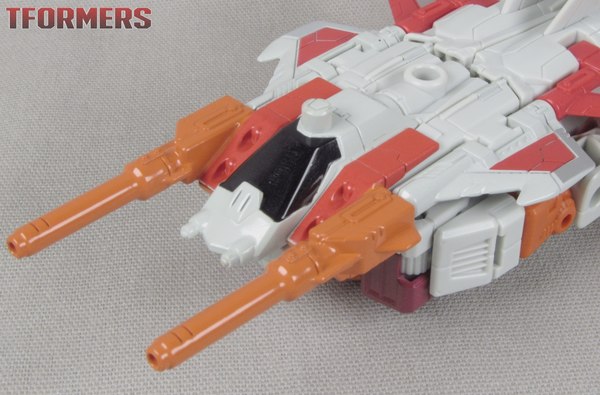 For example, how they turned the rubsign location into a cockpit canopy to preserve that square of black. It looks distinctly different from the Takara Tomy version too, which is based more on the animation model. 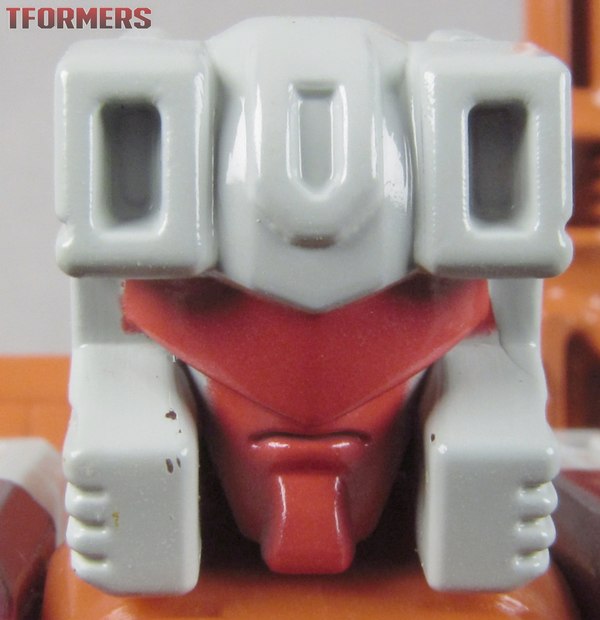 Using the toy version of Strafe comes back into play with the robot mode head. The Takara version skews more towards the animation model in both coloring and sculpt while this matches the original figure more closely. 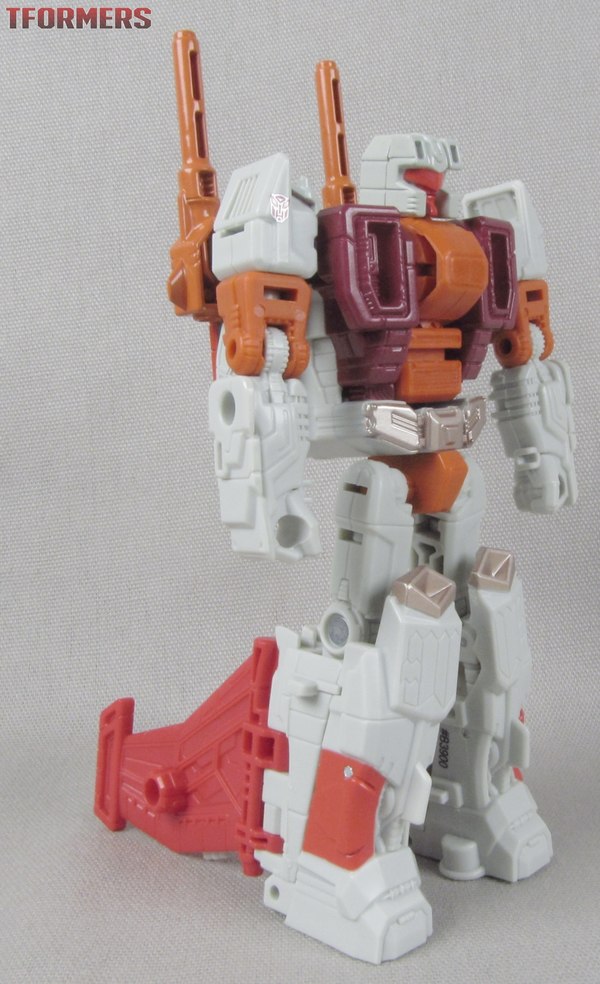 What doesn't match is the color layout of the body. Both versions of Strafe, toy and animation, had red thighs and the only orange was on the guns. Here his white and orange make up a lot more of the figure. The silver parts are slightly tinged with red, making for a kind of a metallic rose color. It seems to be intentional since the package photo matches, and it doesn't look bad. Still, what an odd choice. With the exception of the new head, all the robot parts are straight-up reuses of Air Raid. Similarly to Afterbreaker, Strafe's joint tolerances are all verging on the ideal, sporting strong, stiff joints with smooth movement. The lower legs may pop open from time to time, but that's just a consequence of Aerialbot design. 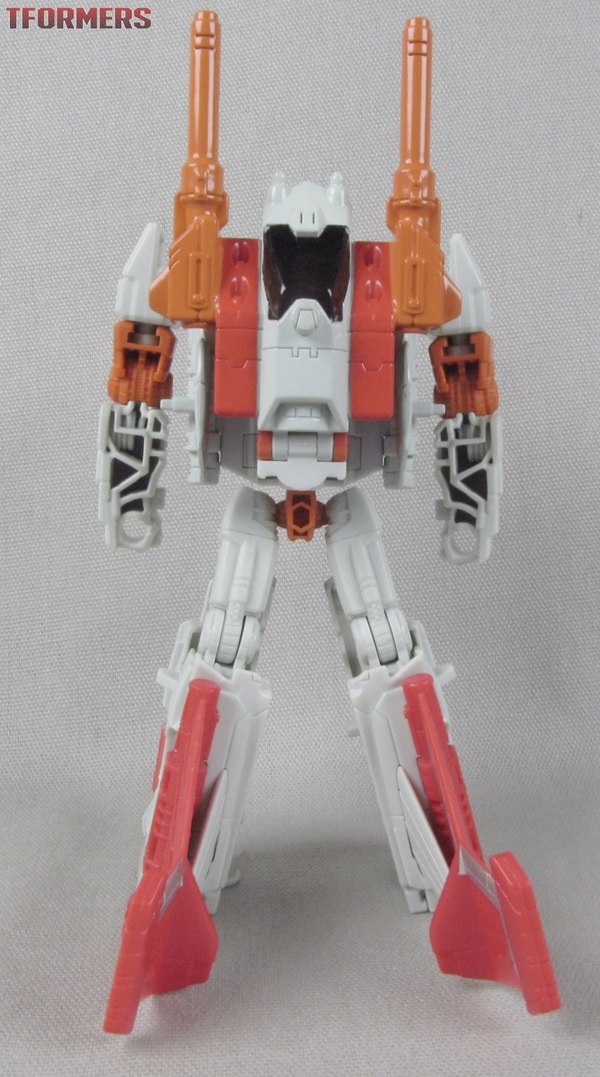 The next choice that plagues Strafe isn't odd so much as sadly necessary. In what can only be a budget consideration, Strafe's guns are permanently a part of the nose of his vehicle mode. So in robot mode he goes weaponless. This may also be because Air Raid himself reused a wave 1 Aerialbot weapon and there's no "native" weapon to the mold, I don't know. But there's some options in the set; Afterbreaker has two guns, and he could always wield Scrounge and Cybaxx as a shield or buzzsaw. 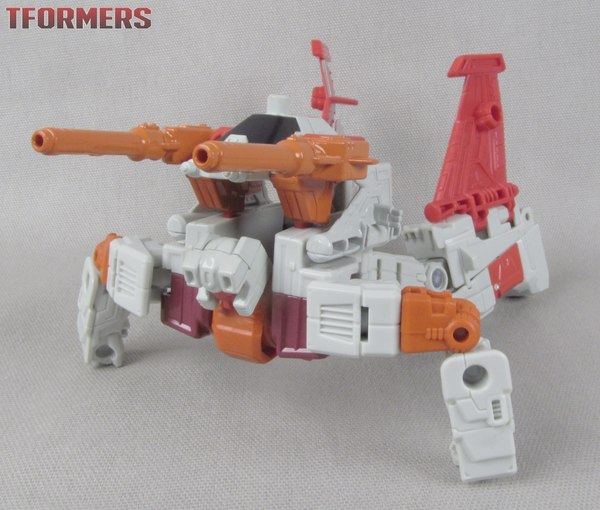 Or, you know, cannon pose. But all that said it really is disappointing to have his guns stuck to his back. 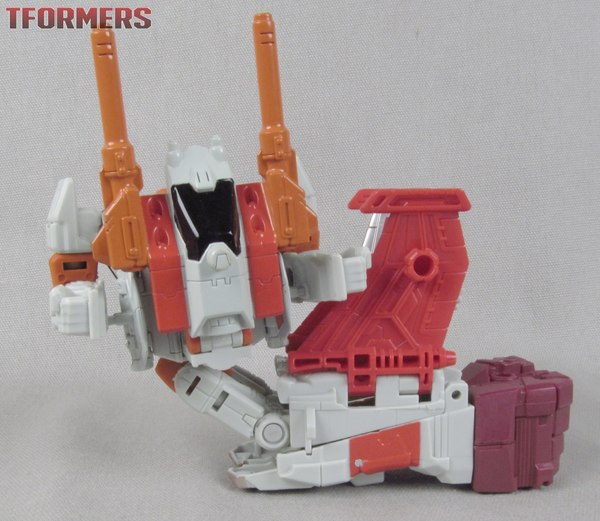 Strafe makes a pretty fine arm! A few things hamper him in very minor ways. First, the paint on his mini-wings makes their tabs too thick to hold the robot arms in place. But as I said before, the joints are very strong, so this has a minimal impact on the arm mode. The bigger wings are attached to the legs and end up on the front of the arm, which is a mite awkward. Lastly, once again the strength of the other joints makes the armatures the path of least resistance, and Computron's forearm pops open from time to time. But these are all minor compared to the issues with Computron's legs, and it is far from the worst arm in Combiner Wars. And he's the designated attachment point for Scrounge! 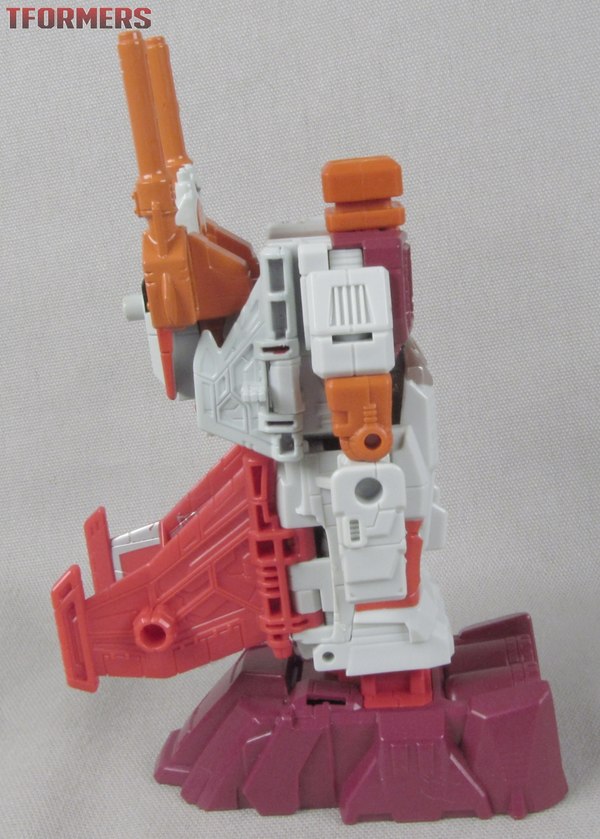 As a leg the lower wings end up being kind of funky once again, sticking way out over the foot. It's not terrible, just weird. 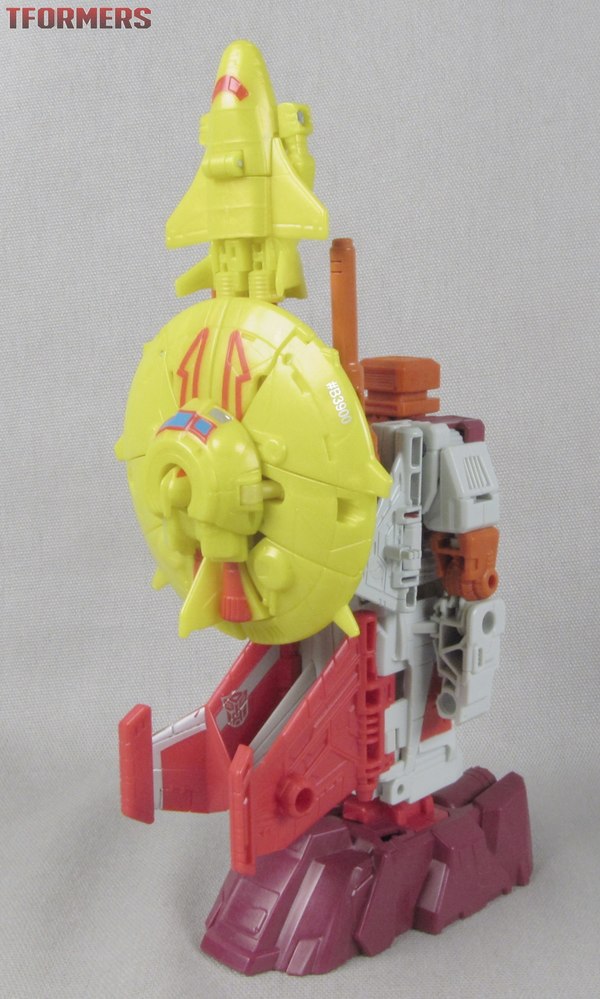