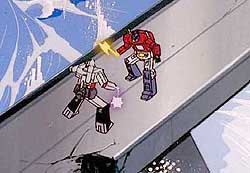 Takara pulled out all the stops at the 2002 Tokyo Game Show with their Generation Zero event held 9/20 - 9/22 in Tokyo Japan. With the amazing toy display, a video preview of the new game, musical performances and new clothing. What more could you ask for? How about an exclusive toy! And boy did they come up with a nice one! For the show exclusive Takara issued the dual figure SCF Confrontation set including Convoy (Optimus Prime) versus Megatron. The set is based on the Transformers season 1 episode 2 scene where the two leaders battle atop the Sherman dam. You can't beat a set based on a cool theme like that. 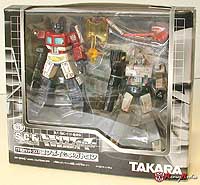 The two figures come packaged in a slick little box with a clear window on the front that display Convoy and Megatron along with their weapons. The packaging is printed on a high-grade light weight cardboard with a semi-glossy finish. The box design is an interesting mixture utilizing elements taken from the Japanese SCF series with a hint of the classic G1 style thrown in. Just like the other Takara show exclusives made in the past, the box is printed entirely in black and white with a grid under-lay that incorporates illustrated face shots of Convoy and Megatron as seen on the ACT series case boxes. 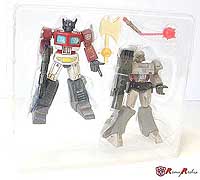 Inside the box is a clear plastic insert that holds the figures suspended behind the display window. Only Megatron is secured in place with a single twist-tie. After pulling out the insert, you'll find a printed color back-drop card depicting the dam scene that you can use to display the figures in front of as well as two of those clear plastic SCF figure stands the SCF's always come with.

As stated above the Confrontation set comes with one each of the Convoy and Megatron SCF figures. Both are based on molds from the early ACT editions. What I really like is each figure comes with both of their weapon accessories that they were made with earlier in the SCF series. So its almost like you are getting two versions of each figure in one set.

Both figures are painted in cartoon version, for obvious reasons, with a liberal amount of battle wear applied to them. Each figure is accentuated with a coating of what is to appear to be dirt from scuffling about and/or charing from the residue of gun fire. While its quite effective, it does look a bit like someone was playing with these guys and forgot to wipe their hands after eating a chocolate bar. 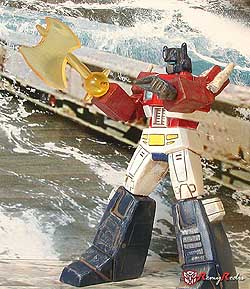 The convoy figure is closely modeled after the ACT-3 Battled Damaged Convoy chase figure minus the severe powder burn on Convoy's right side. Otherwise, the crack in the windshield, dirt marks, scuffs and dis-coloring are consistent with the chase version. For the lucky few that got an Act 3 chase, this may seem like a disappointment, but you do have a way out. Swap Convoy's hand and gun for the fusion axe and you've got yet another version of SCF Convoy.

One other minor thing i noticed is the antennae on Convoy's head have been enlarged on this version (see close-up of head above). Instead of the smaller type that taper off to a point, these are thicker throughout and are rounded on the ends. Seemed odd to me anyways. 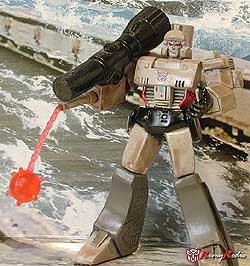 This SCF Megatron version is somewhat of a bigger deal since its the first battle damaged Megatron figure that has been made to date. Like Convoy, his cartoon color paint job is coated in grime from head to toe. That and the additional mace weapon are about all that is different from the cartoon figure version that was released in ACT-2.

Megatron comes out of the box with a sperate left hand clinched in his classic mannered fist. Included loose in the set is Megatron's pink translucent mace weapon. Swap out the hand for the battle mace and he's ready to take on Convoy.

For fans of the SCF PVC figures this is definitely a really nice addition to the series. I really hope we see some other versus sets like this with the clear window and unique figures packaged together. I think its especially cool how Takara has put a set together that celebrates an actual scene from the original cartoon. If you don't have any of the SCF PVC's get this set. Its the only versus set in the SCF series and it comes with the cool extras. Not to mention it being an exclusive, makes it a genuine collectible. 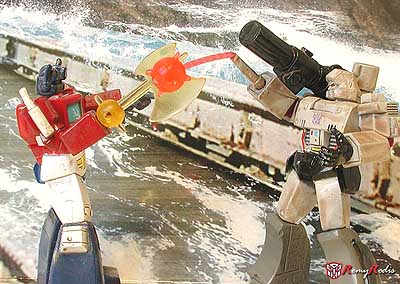 This set will not be sold in retail stores in the USA. So its hard to say how hard these will be to get. They're going for about $40 on eBay at the time of this writing. Takara has said they will be making these available at subsequent shows so don't get too worried if you can't find or afford one right away. However, I wouldn't wait long. This really is one of the coolest of the PVC sets out there and will surely be in demand with TF collectors.

Many many thanks to Snakas for sending me the set that was used to write this review.
Thanks to Remy for supplying the pictures. See the full gallery of detailed images HERE.