Who is Rom and why did he kill four GI Joes, including team founder Joe Colton? Tragic misunderstandings spiral into all-out war in Revolution Chapter Two: The Divine Source of Liberty as written by John Barber and Cullen Bunn, with art by Fico Ossio and colors by Sebastian Cheng. 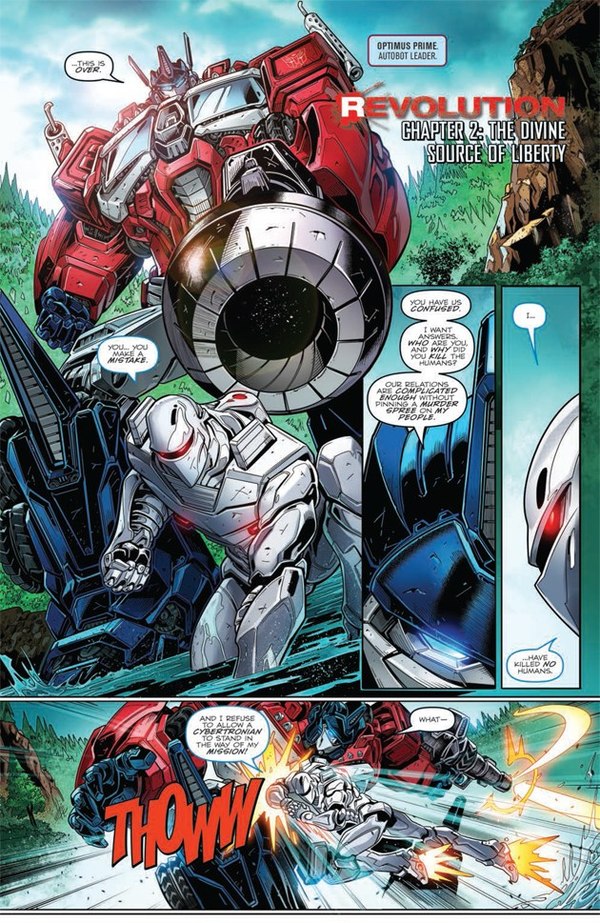 I'm sure this is making somebody's day.

As the GI Joes lick their wounds, Optimus Prime and the Autobots pursue the murderer of Joseph "GI Joe" Colton and discover him to be ROM, Spaceknight. Rom claims that he killed no humans, only Dire Wraiths, but it takes a great deal of convincing to get him to stop and explain to the Autobots what that even means. As Scarlett struggles to cope with the loss of her Secret Dire Wraith mentor, she consults with Miles "Mayhem" Manheim to find out about the next weapon in the war against the Autobots: The Mobile Armored Strike Kommand.

One thing I'll give this: I don't have any trouble following it so far despite the fact that I'm not reading any of the tie-ins that have been released to date. (Transformers-related tie-ins I will read, of course, but those come later.) We get brief explanations of what Rom is and what Dire Wraiths are, and we get quite a bit of setup for MASK. So I don't really have any questions in my mind as to who anyone is or where they came from, and that in and of itself is impressive! And that doesn't even count the profiles at the back of the book giving you background on the characters involved, which is a great addition.

But I feel a need to go a little deeper into something I think I mentioned in passing last issue: Revolution is a terrible introduction to Scarlett, and she is very much at the center of the plot. Granted, we find her in extremely difficult circumstances, but she's spent both issues now not at all in control of her emotions, making poor decisions, and jumping to some very bad conclusions. In one panel of this issue she even assaults a member of her own team for making a poorly-considered joke about the late Colton. Having not followed IDW's GI Joe comics, this doesn't exactly encourage me to start. I always expected to be rooting for the robots in this, but this is a bit much. It sure doesn't jibe with that glowing profile of a ridiculously, impossibly hypercompetent woman given in the back of the book.

Fico Ossio's art continues to be slick and quite good overall. And Scarlett - who again is at kind of at the center of my not enjoying this comic as much as I'd like - is only wearing That One Expression in about 8 of the 22 panels she's in throughout the book. This is a major improvement! (This accounts for long shots where T.O.E. can't be decisively accounted for one way or the other though. I'm not a statistician.) But there is a panel early in that you can see in the preview where Helix and Scarlett are both using That One Expression in the same panel. Which does bring up a thing that I've seen before in a lot of talented artists: at least within the bounds of this issue, Ossio only draws one woman's face despite there being at least four different women here. It's not something that majorly detracts from the issue as a whole, because most of the time he's drawing robots and cars and Spaceknights all very nicely! Luckily, the issue #3 preview that's already up shows a little more of his range in terms of people so I don't expect this to be quite as noticeable going onward.

Sebastian Cheng keeps up with Ossio just fine throughout, and the comic is downright vibrant. The colors are vivid, bright, and inviting, and even in the depths of a military base there's contrast. It's a great book to look at, no doubt.

We're down to only eight covers this month, but that's still more than I think I can go into detail on. But highlights: Brandon Peterson's Subscription cover showing Optimus fighting Rom - I'm a sucker for art that clean. So many lovely sharp edges on Prime without him looking stiff and lifeless. Subscription Cover C by James Biggie is a neat propaganda poster, the equivalent of "Loose Lips Sink Ships" except with Soundwave, whose hearing is of course beyond excellent. And of course Guido Guidi gives us another killer `80s style image of the Autobots and Matt Trakker. (But let us not forget that Guido can work in just about any style you put in front of him; as good as these are I don't want to see such a versatile artist pigeonholed as Retro Cover Guy!)

Retro Toy Watch! ...sort of. The last cover I want to address is Adam Riches' cover showing an imaginary two-pack of figures. This month's figures are Rom, and Joseph Colton. Unlike the previous cover, where there were real but not-to-scale figures of Optimus Prime (MP-10) and Scarlett (first Real American Hero 25th Anniversary Collection release), the Colton figure shown does not, strictly speaking, exist. Above the neck it's the GI Joe Adventure Team Commander from the 1970s, below the neck it seems to be the 30th Anniversary GI Joe Green Beret. Now, both are good choices: the original GI Joe figure (and all but a very few specific releases in the original 60s-70s line shared that likeness) was retconned to be Joseph Colton. The Green Beret figure from 1993-4 was both an homage to the original GI Joe Green Beret set and the first figure ever explicitly released as Colton. Meanwhile the Adventure Team Commander - which is Colton's past role in the Revolution continuity - initially wore an outfit very similar to the Green Beret figure. (Same jacket with an Adventure Team sticker stuck on it.) So in terms of hybrid figures it's a very good choice for Colton all around, but I wonder why the splicing when any AT Commander or 30th Colton would've done on its own.
(Also, the wrists are wrong for both the original AT Commander AND the 30th Colton; it's the slightly earlier `90s "Hall of Fame" body so maybe it's a Hasbro stock photo of the prototype Colton figure, or...)

Anyway! This book isn't bad. It's not anything like bad, but it's not hitting very well with me. I think it's because even though I like GI Joe and MASK and all those, I don't have nearly the attachment to any of them that I do Transformers. If you do, you're in for a treat to see them all together in one cohesive world! If you don't there's still interesting things going on, and I'm hopeful that the comic is going to move beyond the small things that I have misgivings about.