Maybe the real Knights Of Cybertron were the friends we made along the way. ...okay, probably not. But this issue is about the friends our Decepticon friends the Scavengers have made along the way. More Than Meets The Eye: Revolution is the final comic to bear the title, and is written by Nick Roche & James Roberts with art by Alex Milne and colors by Joana Lafuente. 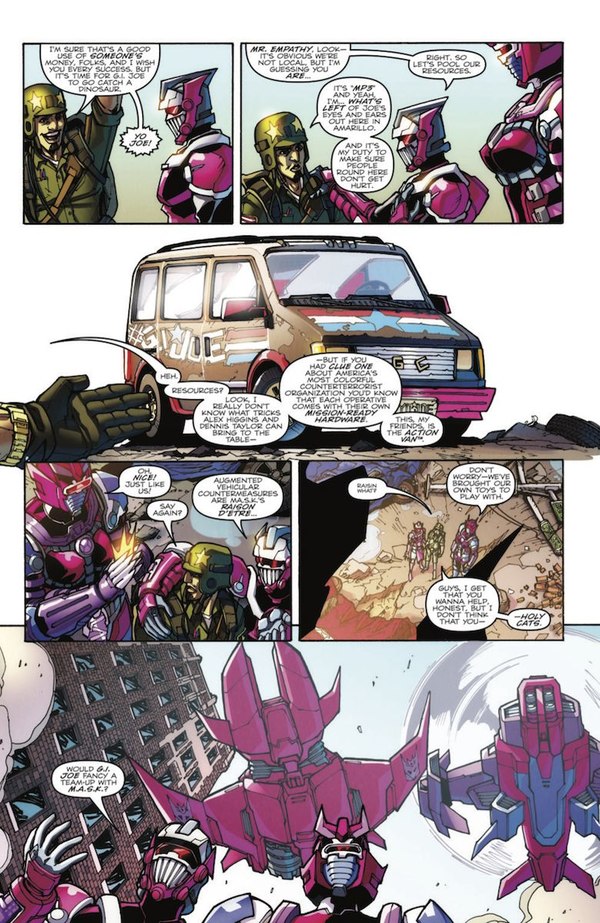 Nobody here is quite what they seem. I don't think that's much of a spoiler.

Grimlock rampages across Amarillo, Texas. Later that day, a trio of unlikely heroes decide to pool their resources: MP3, of the local GI Joe chapter, and two representatives of MASK whose vehicles look suspiciously like Misfire and Spinister. Meanwhile, back on the Weak Anthropic Principle, Crankcase prepares for a date with someone he met on the Space Internet.

Though he's more known for his long-form comics writing at this point, I have a soft spot for James Roberts' stand-alone stories. Here, he and Nick Roche team up for the first time since Last Stand Of The Wreckers to put out a fun one-shot that, counter to its title of "Nothing Will Be The Same Again!", looks like it will have no real impact on either the IDW continuity at large or MTMTE/Lost Light continuity in specific. And that's okay! The title and content of the story both carry some pointed commentary aimed at the type of comic Revolution is and what it and its tie-ins are supposed to accomplish. Not in a "written under duress" way so much as a satirical, "hey, think about how silly this is for a second" kind of way. For someone like me who has been very skeptical of Revolution and its aims, this is quite refreshing.

The plot is entertaining enough, but the characters and their interactions are really the point of the whole thing. The book features characters from across the scope of Revolution, and true to Roberts' writing - especially of the Scavengers - few are what they seem and fewer still are what they're "supposed" to be. How they cope with those facts make up the core of the story at the character level. And as usual there's some entertaining dialogue. ("Be who you are. Within reason, obviously. Be a less abrasive version of who you are.")

When MTMTE becomes Lost Light, we'll be trading Alex Milne as regular artist for Jack Lawrence, at least for the first story arc. Last I heard, Milne is slated to return later, alternating arcs with Lawrence. No disrespect meant to the latter, who is an excellent artist himself, but I'm going to miss Alex. And no disrespect intended to Priscilla Tramontano either, whose work on the last two numbered issues of MTMTE was fantastic, but I'm also happy Milne gets to be the one who closes out the MTMTE name at IDW. The book should go out with its regular artist looking as it's always looked. And he does his usual fantastic job on it! After reading him for so long it's easy to take for granted all the things he's good at: most important of all is making complex mechanical people read as all three of those things equally. And making them look weathered and worn without going overboard with it. On top of which, Milne gets to show off that he's just as talented with more mundane characters and surroundings - even if there is kind of a giant robot dinosaur wrecking them up at the time. And of course, his familiarity with the characters just helps. It's tough not to think of an artist as the "default" in terms of how characters are presented, but that's not fair either to the artist himself - whose work it minimizes - or to other artists whose work and interpretations are equally valid. That said, Alex is MTMTE to me, and it's going to take adapting to a new regular. He will be missed.

As has been the case for the bulk of Season 2, Joana Lafuente colors the issue. Her talent with warm, vivid colors plays extremely well in the sunny Texas setting, and she does a great job of making sure that all the various species included in this issue look distinct. It's hard to describe exactly what I mean by that, but without getting into heavy textures she manages to make light hit metal, human skin, and other surfaces differently. She also follows the lineart cues very nicely on a specific robot whose finish is meant to look different and less weathered from the rest. As with Alex, I'm happy to see her get to finish out Season 2 with this special episode.

Good covers this month! Alex gets the main cover for this issue with Josh Perez on colors, showing the Scavengers lunching with the main cast of Revolution. Don't miss the Micronauts sitting on the table in front of ROM! Frequent Wreckers collaborators Nick Roche and Josh Burcham pick up the subscription cover, further poking fun at the nature of this crossover. (And they're right: I don't remember that guy! Who is that guy?) Lastly, painter and concept artist Ken Christiansen has Misfire and Spinister wrestling with Grimlock in his own distinctive style. This has helped me articulate something I've been thinking about for a while: IDW's Grimlock bears certain similarities to both Transformers: Age of Extinction Grimlock and the Cybertron mold of Beast Wars Megatron. Interesting!

This issue may not reach the comedic heights of Spotlight: Trailcutter or have character dynamics as memorable as Spotlight: Megatron, but it's definitely a reminder of Roberts & Roche's talents for one-shot stories, something I hope they'll both get to do more often. And in terms of style and spirit, it probably does as well as being a bite-sized sample of More Than Meets The Eye as anything can. And it has some things to say that I feel are worth saying about the Revolution concept. It's a decent little issue and worth checking out.