I have wanted a Quake toy for a long time. And I don't even know why in particular. What I didn't need though is another Hardhead. I have one with a Headmaster add on that I'm very happy with already, you see. So it worked out perfectly that Titans Return Hardhead would get a new face and a redeco to be Quake. Less perfect is it being one to a case in wave 5, but sometimes these things just happen. 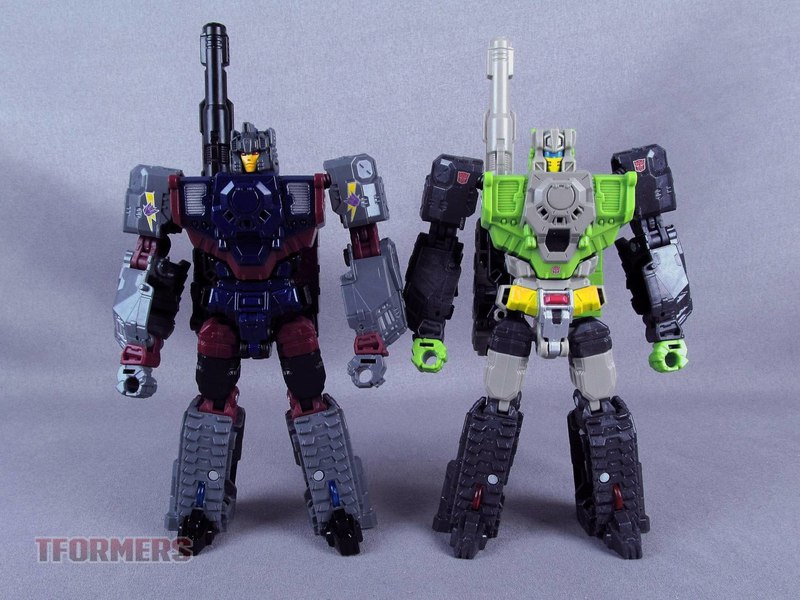 Of course the main draw here is the deco. The robot mode got most of the priority when it came to mapping the G1 toy's colors to this mold. It does a fair job. The blue is darker than the original, and the lower body has less burgundy, but with the exception of the black thighs, the color layout actually works really well. 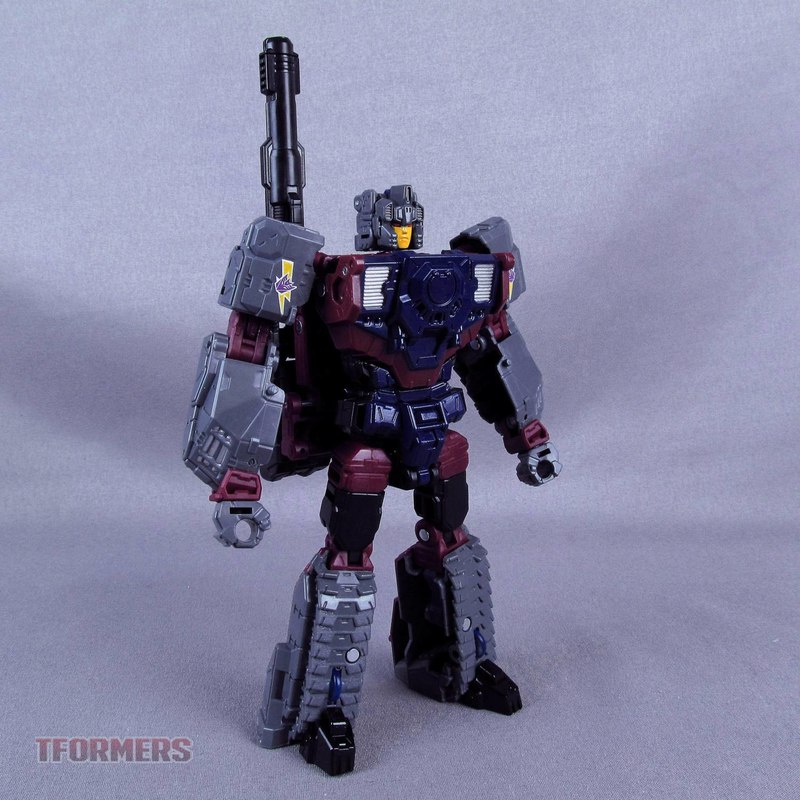 Quake's special lightning bolt Decepticon emblems are moved in to prominent view on the front of either shoulder. But the symbols themselves are the movie variation, in case that small detail is significant to you. 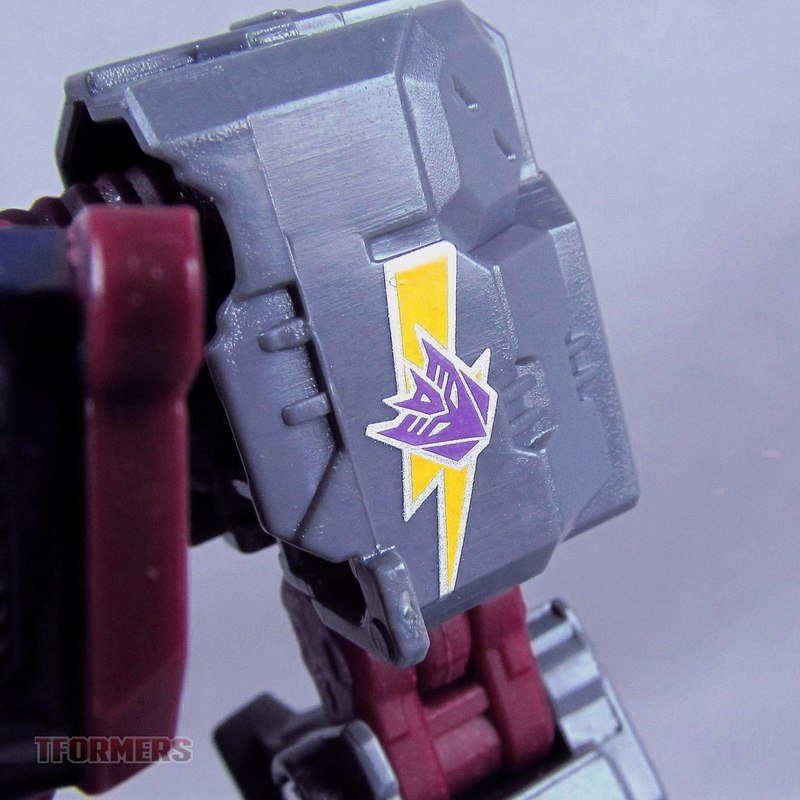 Personally, I'm just thankful they de-emphasized that horrible screaming skull Hardhead had on his chest. 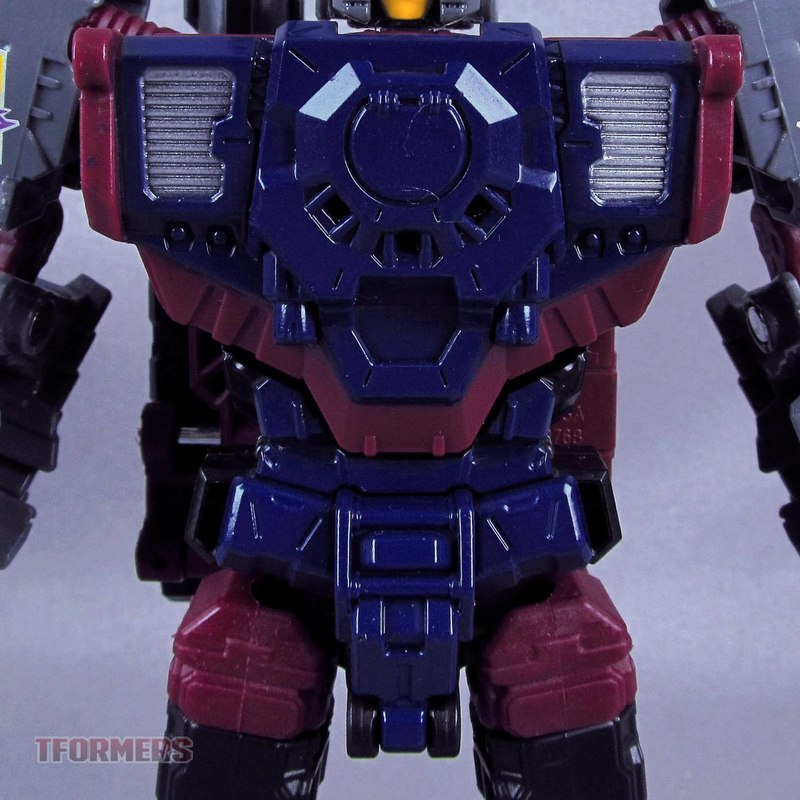 Okay, so the other important part is that new face sculpt. The original toy's face was ...actually not too unlike a Naoto Tsushima face, come to think of it. This shares basically nothing besides being a face. It's a simple sculpt, but just a little bit of character shows through, and I'm happy with how it looks. The helmet shape around it is really nicely done. It replicates all the details of the original and adjusts the proportions just enough to make it all fit together really solidly. And in a nice touch, the Titan Master arms sticking up match the tall "ears" present on the original Quake. 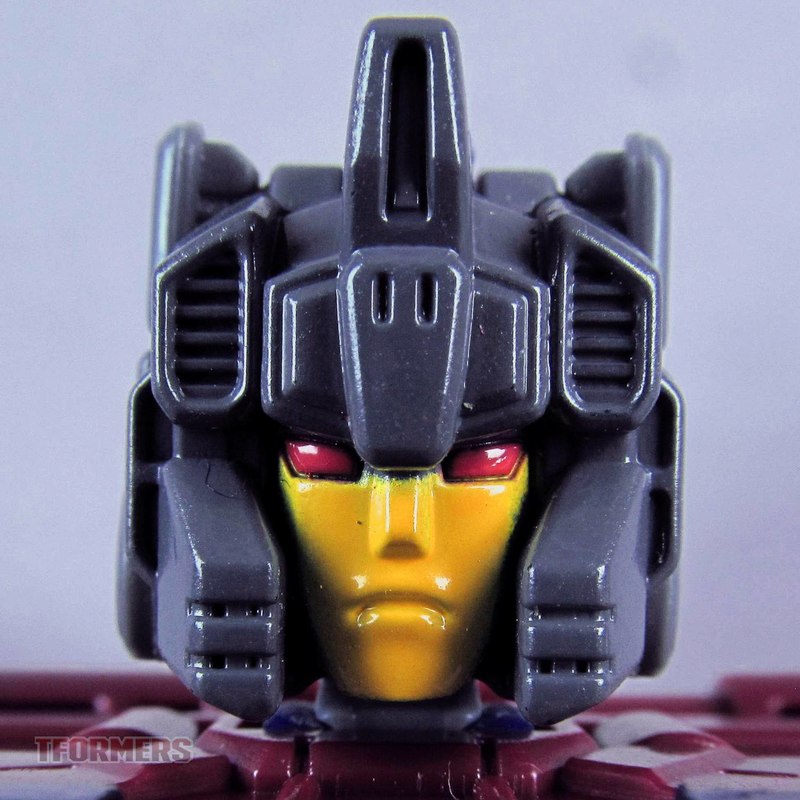 The rest of the Titan Master is all the same as it was with Hardhead. Except with less paint. Though in this case I'm absolutely fine with the paint budget being focused on the main body. 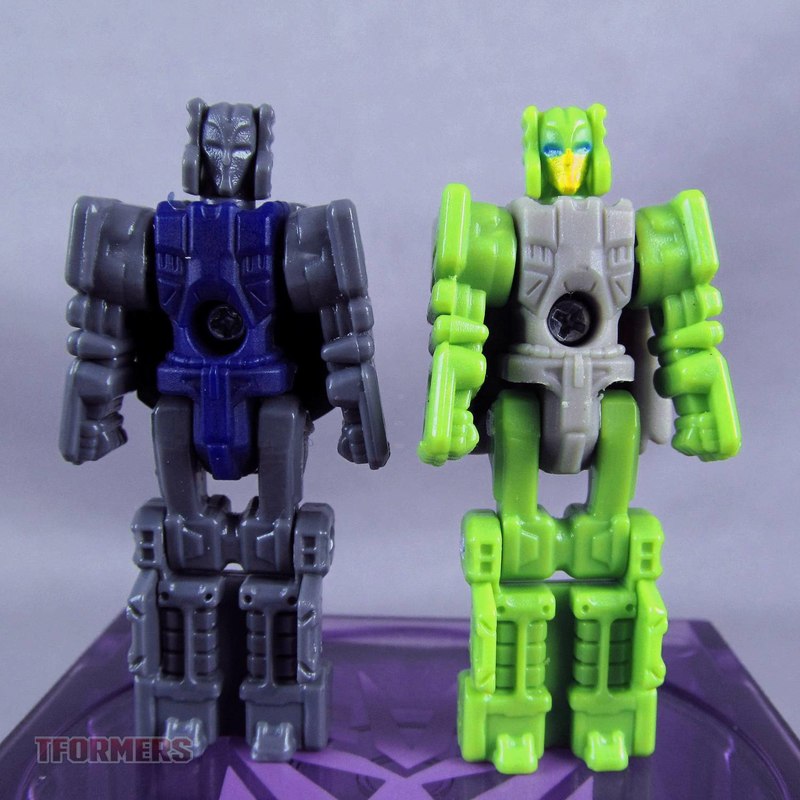 It's sure not helping the Titan Master's own face to look anything other than nightmare inducing, though. Yikes. 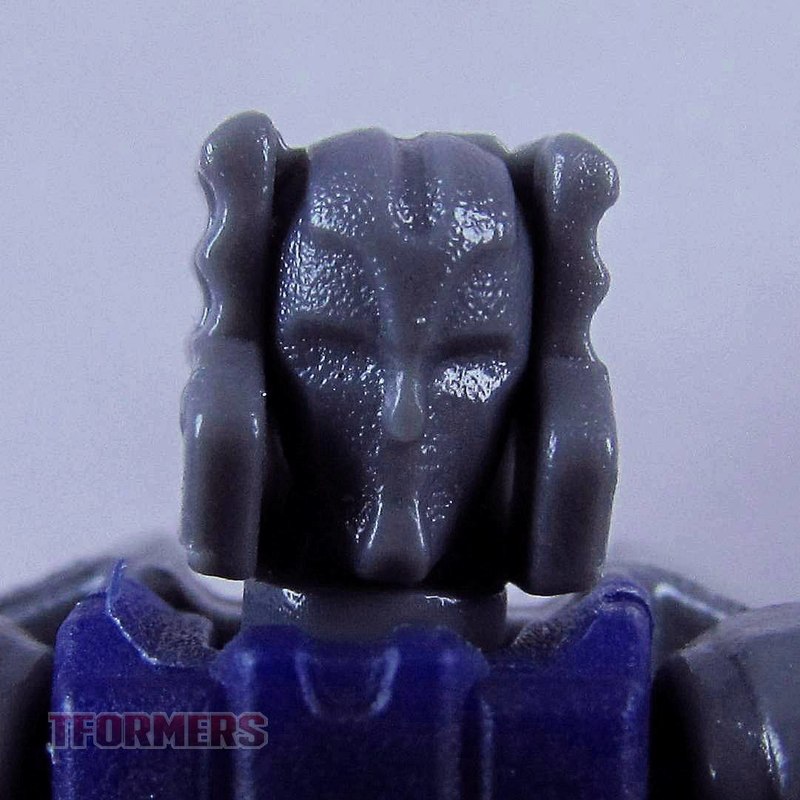 The redeco has not hurt the mold's articulation any. If anything, the joints are better than they were on Hardhead. The leg joints are all quite stiff. In fact in some cases you might find them overpowering the transformation joints. That's a problem more for the hands, though. The wrist swivels are stronger than the transformation hinges, so turning the hands without folding them inward can be tough.

And of course any normal Hardhead features apply here. The cannon can sit over the shoulder, or stow on the back out of the way otherwise. 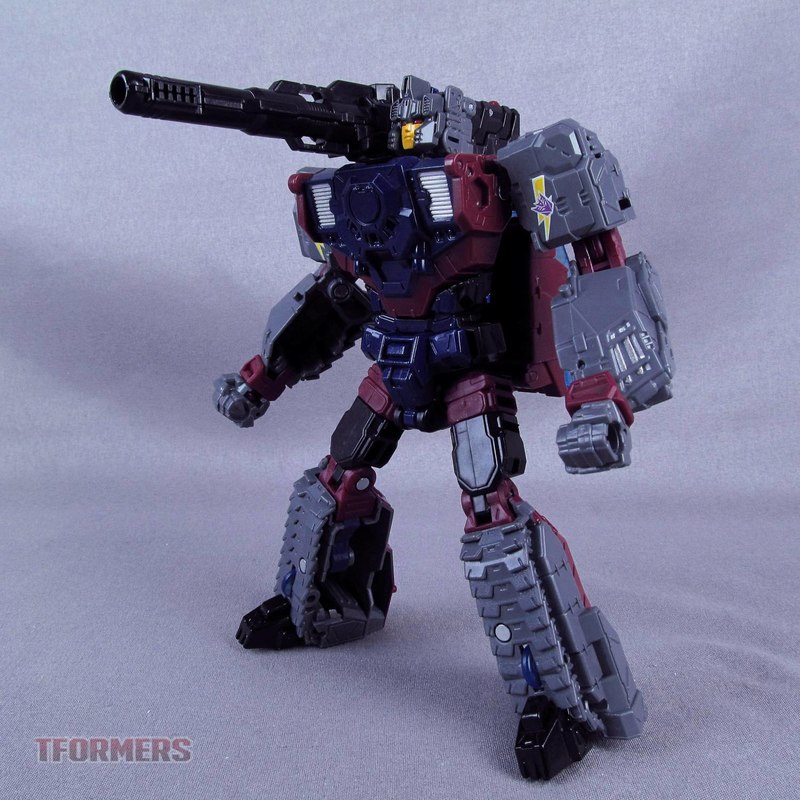 Quake comes with the same rifle as Hardhead too. I have to say I like it more in Quake's grey than I did Hardhead's green. 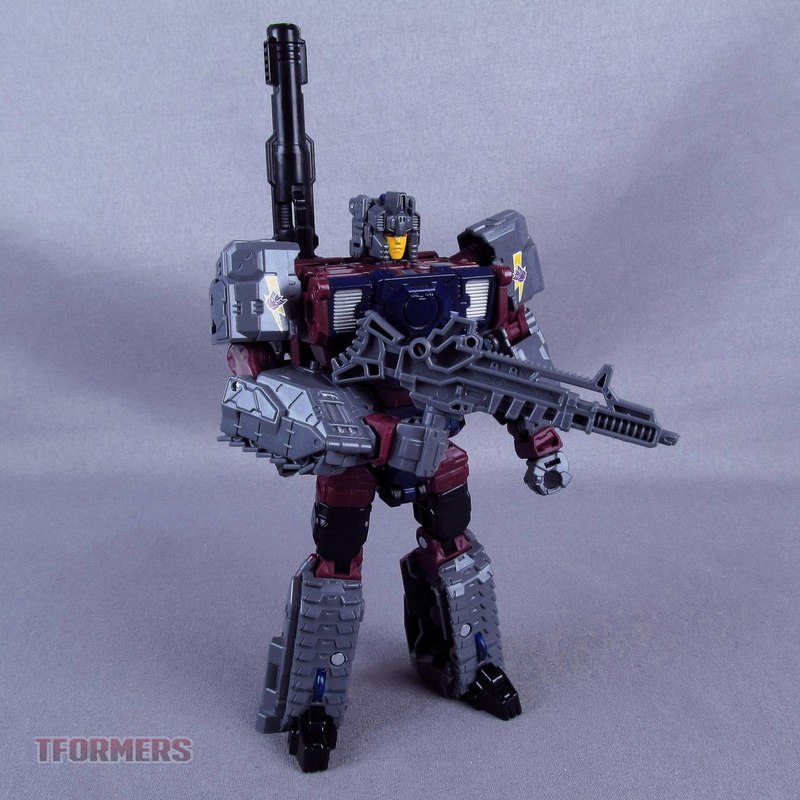 Functionally unchanged recolor as it is, I think we can skip the transformation walkthrough. The vehicle mode is what has me particularly impressed with the deco layout. It's by no means accurate to the original toy, let's say that from the start. But it's pretty great how the tank's colors ended up making some internally consistent sense, with the only thing looking unusual being the dark blue plate in front. Some deco artist did a killer job making this work. 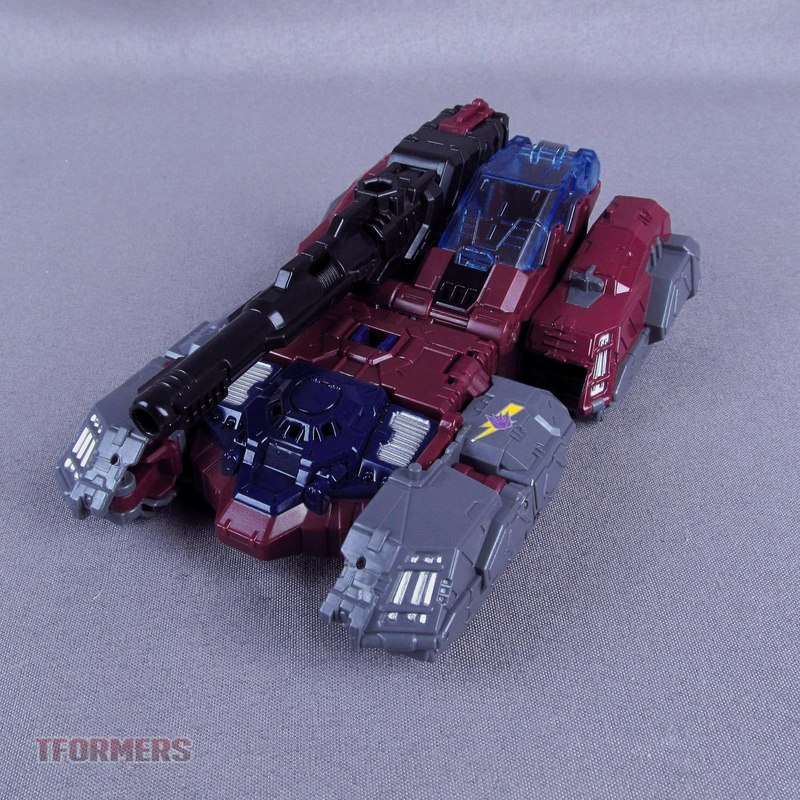 One thing I'll call a flaw doesn't immediately present itself while in robot mode: The unpainted treads. In robot mode these are left unpainted partly to map the original deco better, though I'm sure the saved paint applications were useful elsewhere too. But here it stands out in a kind of negative way, especially on the front pair. About the only thing I can think they might have been able to do about it is use a slightly darker grey paint to try to keep the overall appearance intact. Under the circumstances I can see how that'd probably be pretty low priority though. 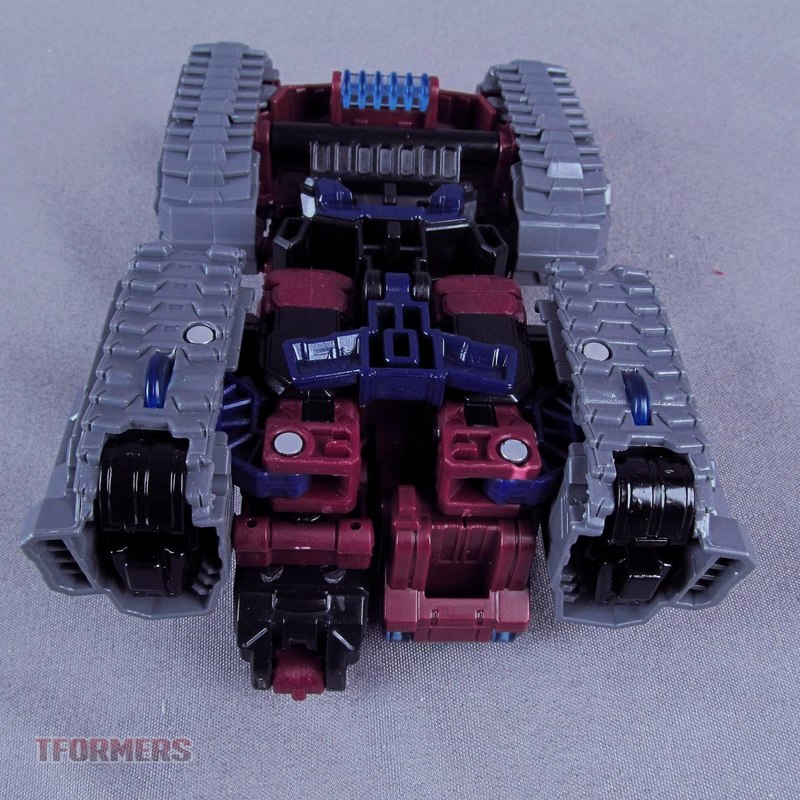 There's some nice subtle qualities to the deco as well, like the clear blue canopy helping balance the blue down front. And there's a little bit of black right in front of the driver compartment too that helps tie in the black main gun. 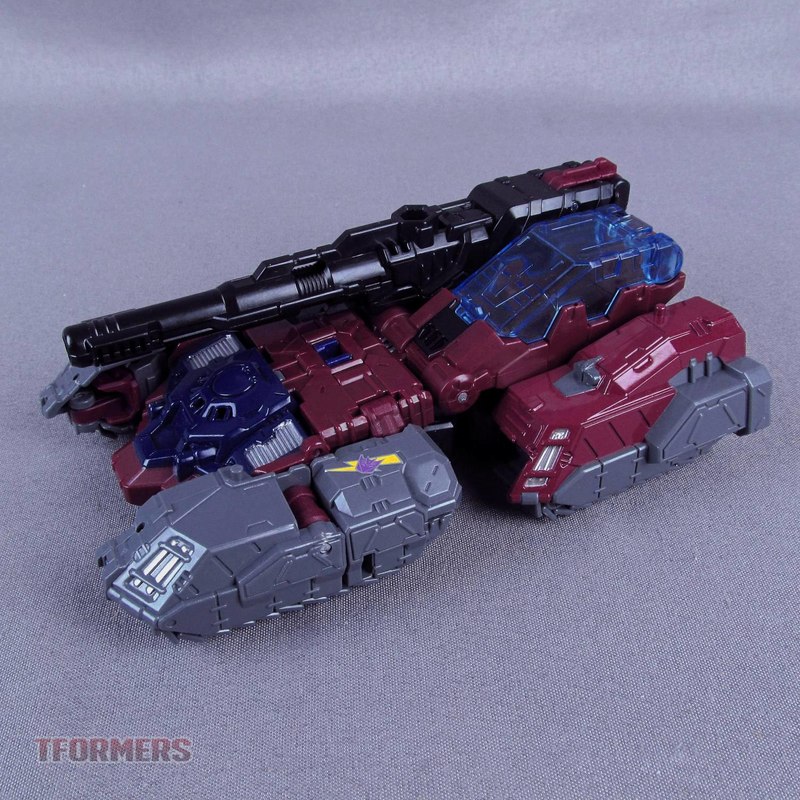 Giving a tiny bit of accenting, the tread units each have a small amount of silver that dresses them up in a very non-intrusive way. At that point, the big silver vents look like they're out of place for being so prominent. 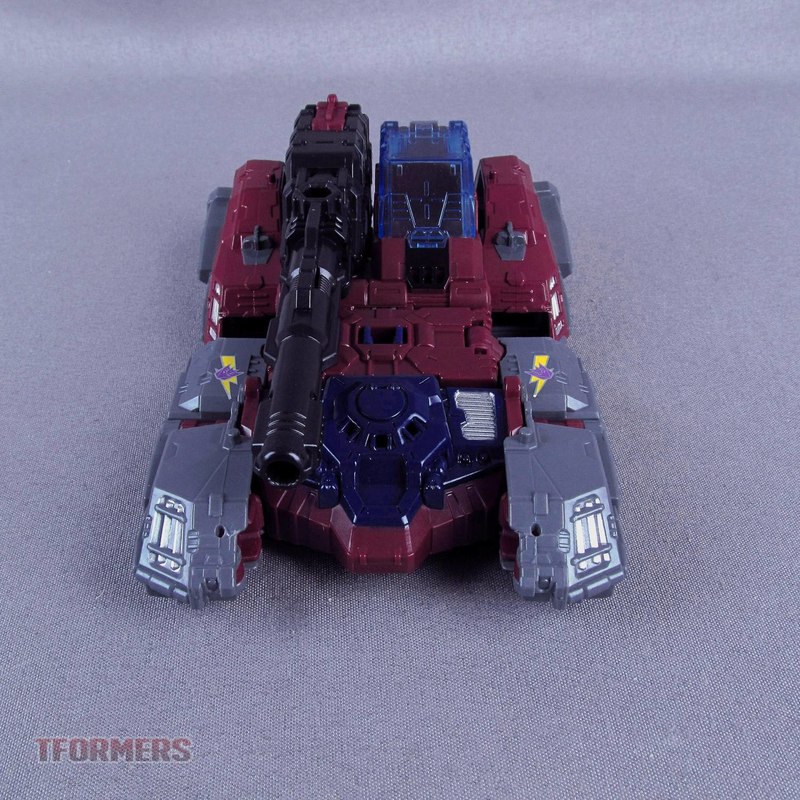 The tank modes fares just a bit more poorly than the robot mode for how the plastic tolerances played out. Each of the tread units is able to pull away from the body far easier than they ought to. The actually intentionally moving part, the main gun, fortunately comes out a lot better. It's connecting arm moves smoothly enough, and the connection between it and the gun is strong. 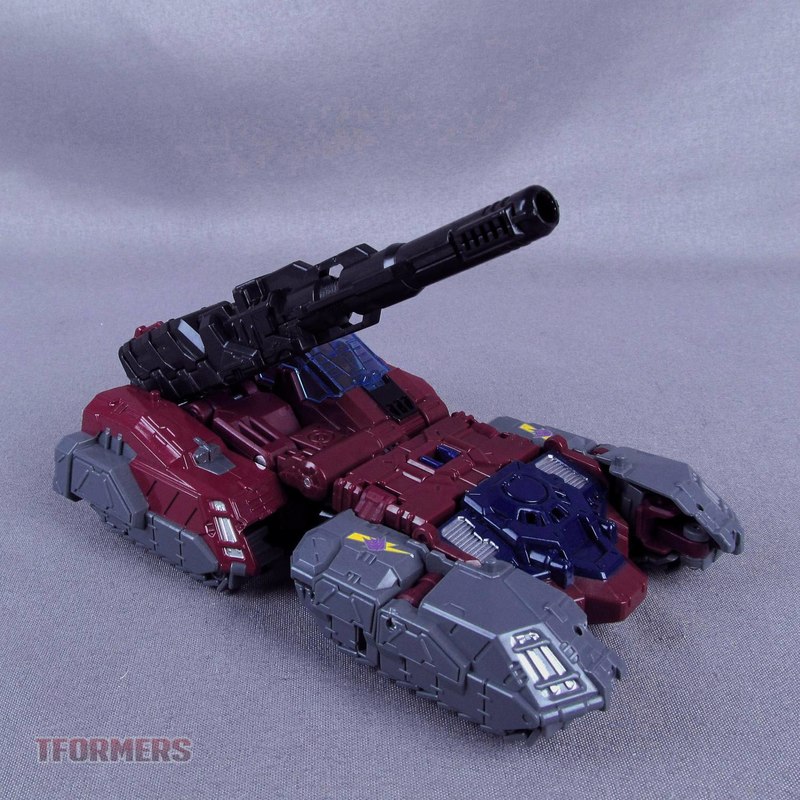 However, the cover for the Titan Master seat on the cannon is actually quite difficult to move now. So the result seems to be that moving parts are better, while the ones not meant to move got worse. I can't decide if that's a favorable outcome or not. 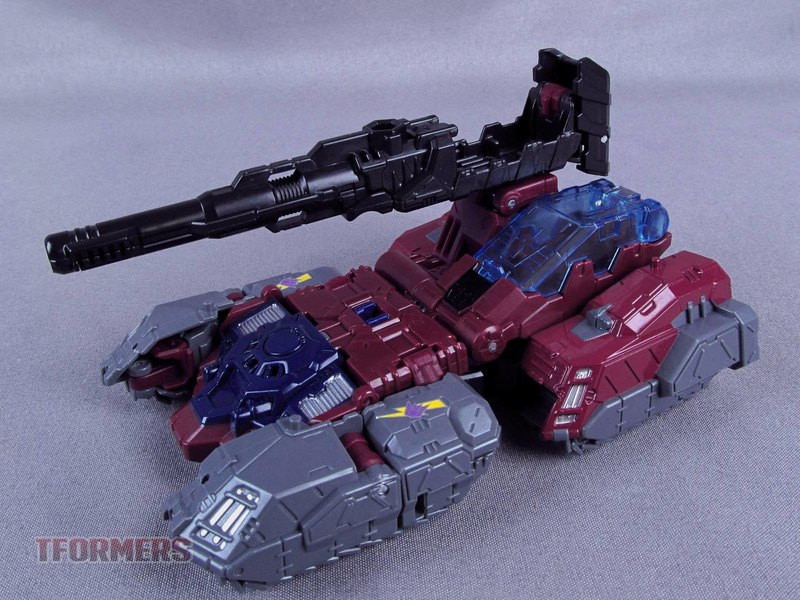 As soon as I knew it existed, this Quake was something I knew I wanted. It's not my dream Quake, maybe - and there's probably a special level of sadness I'm in for even having such a thing as a "dream Quake" - but that Beast Machines Tankor recolor is never gonna happen, so I'll have to settle for second best. And settling in this case is not a bad thing at all. Contrasted with Getaway from last wave, this is a redeco done completely right. The deco work is really strong, there's a ton of paint in use to fit the character to the mold, and both modes look fantastic. The new face sculpt is really nicely done and takes advantage of features of the Titan Master in a clever way. All around, Quake's an excellent job and I'm super satisfied with it. But this is the redeco I knew I wanted. Next let's talk about the one I didn't know I wanted. 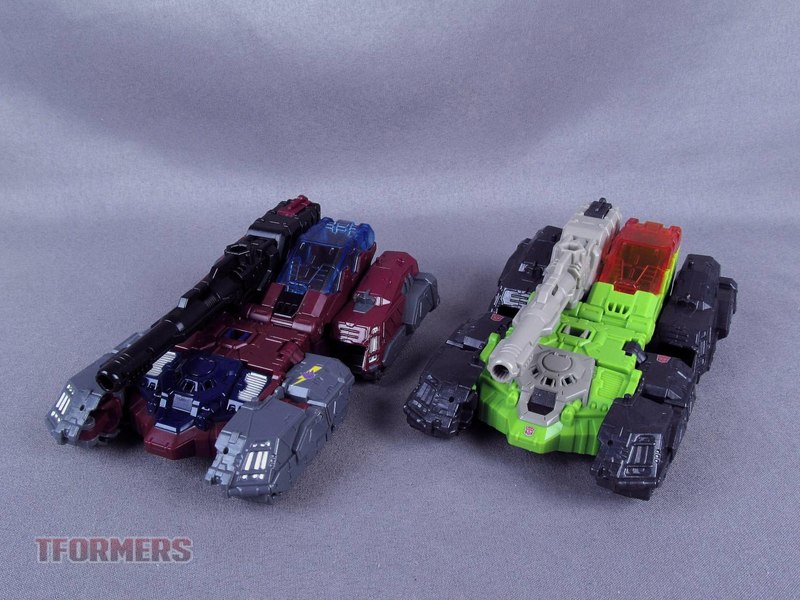