So conventional wisdom for the longest time was that Krok, an Action Master original character, would have had something like a spaceship for an alternate mode. The defunct Collector's Club went in this general direction using the 2013 stealth bomber Megatron mold for their Krok toy. But, for a surprising mass retail release, Krok is ...a crocodile. And you know what? I'm really okay with that. The best thing about late G1 had to be the colors, and Krok makes a great example of that. This Krok hits all the major notes, giving a mostly accurate layout of black, purple, silver, a little bit of red, and, oh yes, the highlighter yellow. Okay, maybe this color scheme isn't a Krok original, but he's more saturated where it counts than, say, the Insecticons who are similarly colored. 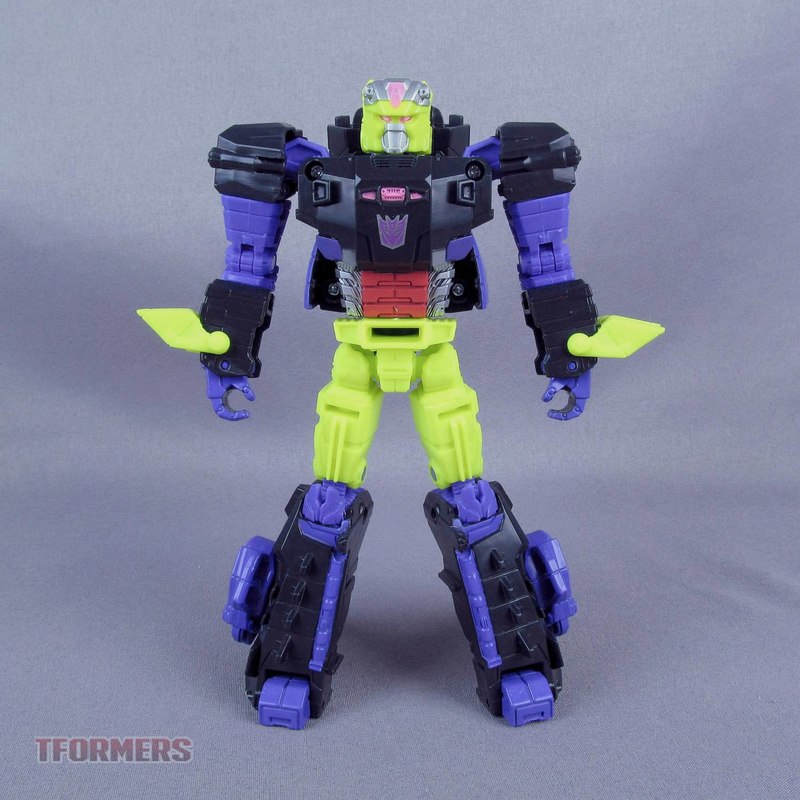 I think the surprise is just how well these colors suit this mold. Most of the body is black plastic. There's a purple sprue which I believe is an unpaintable plastic tree and occurs around the joints. Any other purple you see is all painted on. There isn't a whole lot actually specific to this mode. Mostly it's the little bits on the legs and toes, and the hands. Any other purple is really in service to the beast mode, so I'll talk about it more there. 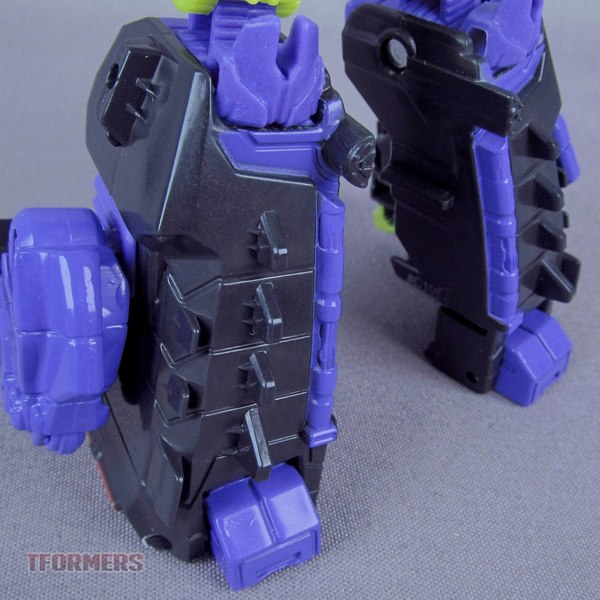 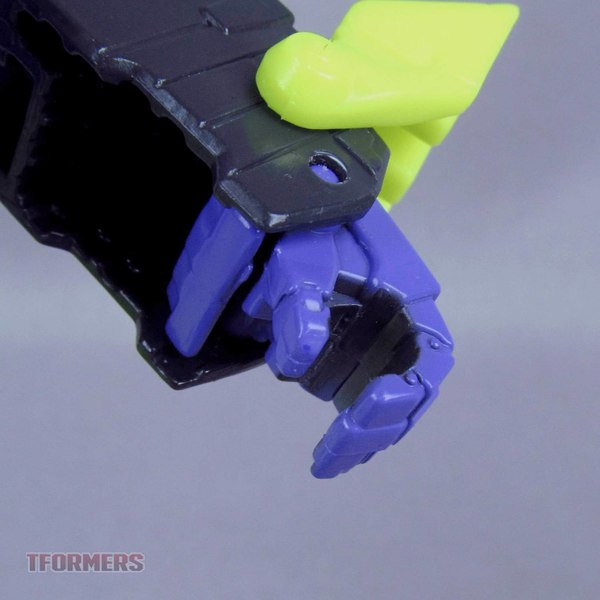 I love the way the yellow plastic looks in person. It's hard to keep it from blowing out on the camera, but it is completely just the same color as a yellow highlighter, and I love how that plays against the black making up most of the robot mode. The silver and red in the torso deco set off the sculpted details well, and the bits of pink to represent the chest windows of the original Krok are a nice accent too. 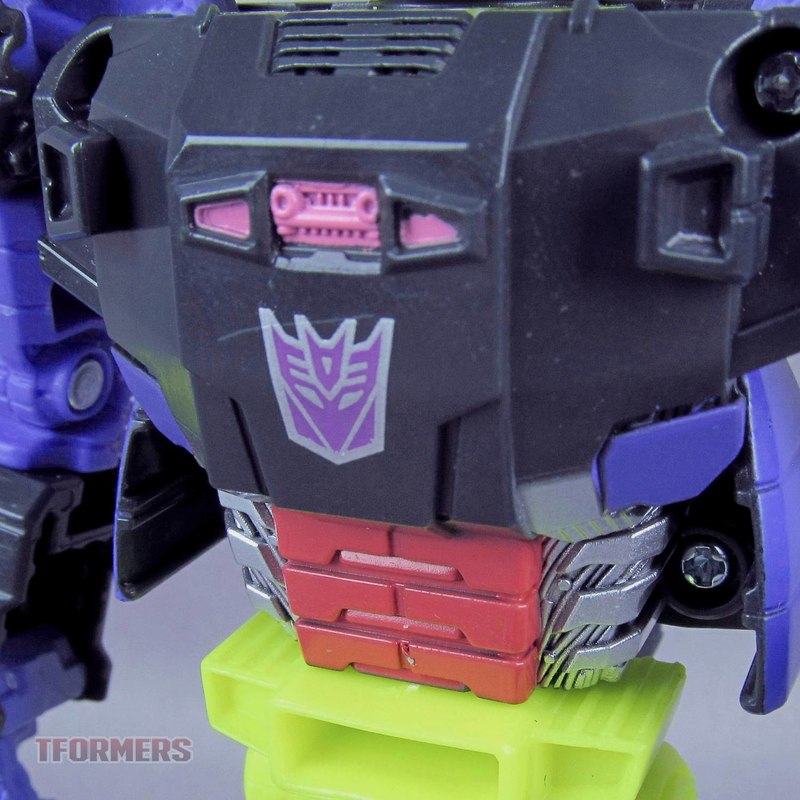 So, one thing you might wonder about is how the mold is holding up compared to Skullcruncher who had... problems. 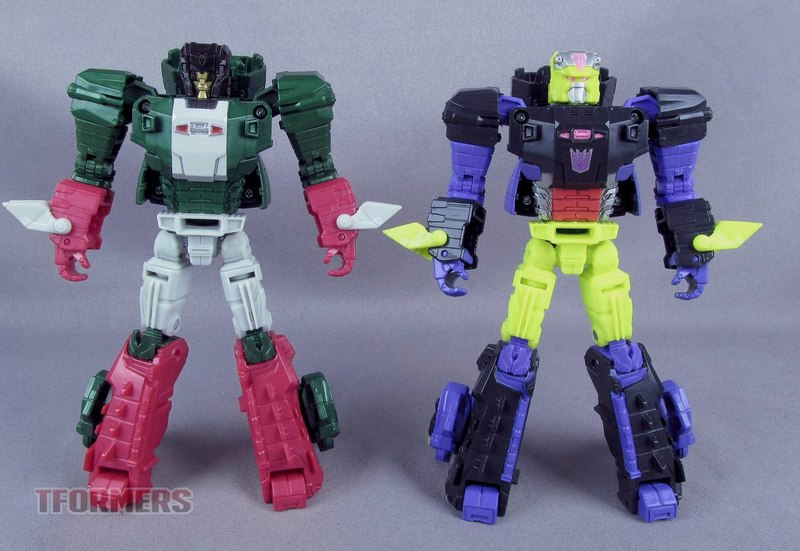 The hip joints were the biggest offenders, and I'm happy to say the joint tension is quite a bit better on Krok. It's not perfect, still a little bit on the loose side. But it's so much better than before. The thigh swivels are about the same, but to me that was always a very minor problem. One issue I particularly had with Skullcruncher was the knees not locking in position very firmly, and that's another thing I've found to be improved on Krok. And the toes, probably thanks to being paint covered, don't fold in anywhere near as readily. So the significant issues Skullcruncher tended to exhibit are very much minimized now, which makes me like this even more.

Krok's face sculpt comes out looking a little bit off in the proportions. The sides of the helmet detailing seem like they come in too far, and so the face becomes quite small looking within the head. Looking at photos of G1 Krok, I can kind of see where this is coming from, but that still had the faceplate flare out wider to suggest more width, where this doesn't. It's not awful, just a little bit off from my expectations. 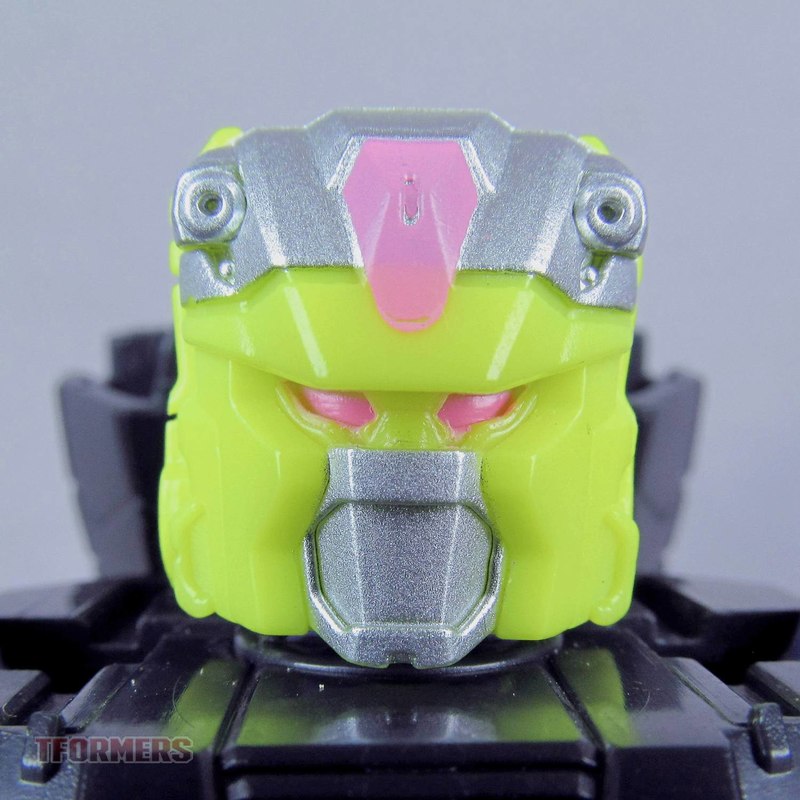 Of course the body of the Titan Master is the same as Skullcruncher's, minus any paint. Sadly, most all detail on its face is lost in the highlighter plastic. 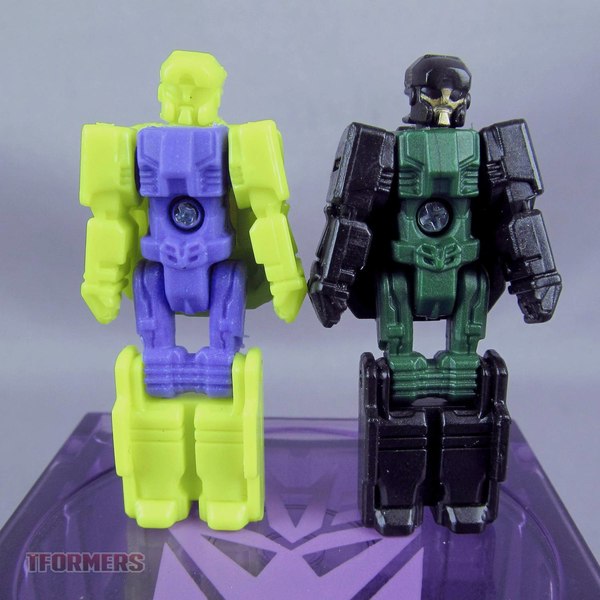 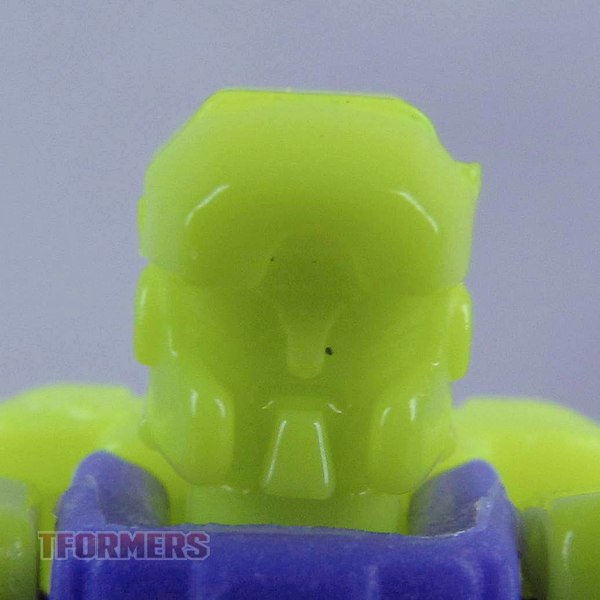 The same accessories are in use, with the cool looking small gun, which actually suffers similarly to the Titan Master with the finer details fading away in the fluorescent yellow. The tail club thing looks super nice in its purple and black deco, though. 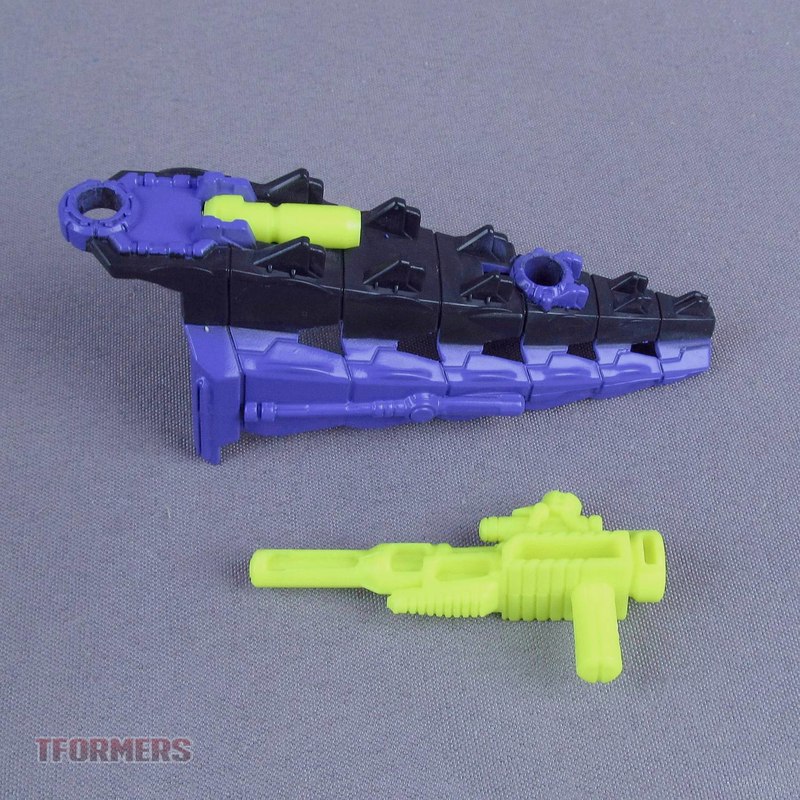 Still lacking any other elegant way to utilize that part, I'm gonna keep putting it and the pistol together to make a big rifle like I did with Skullcruncher. 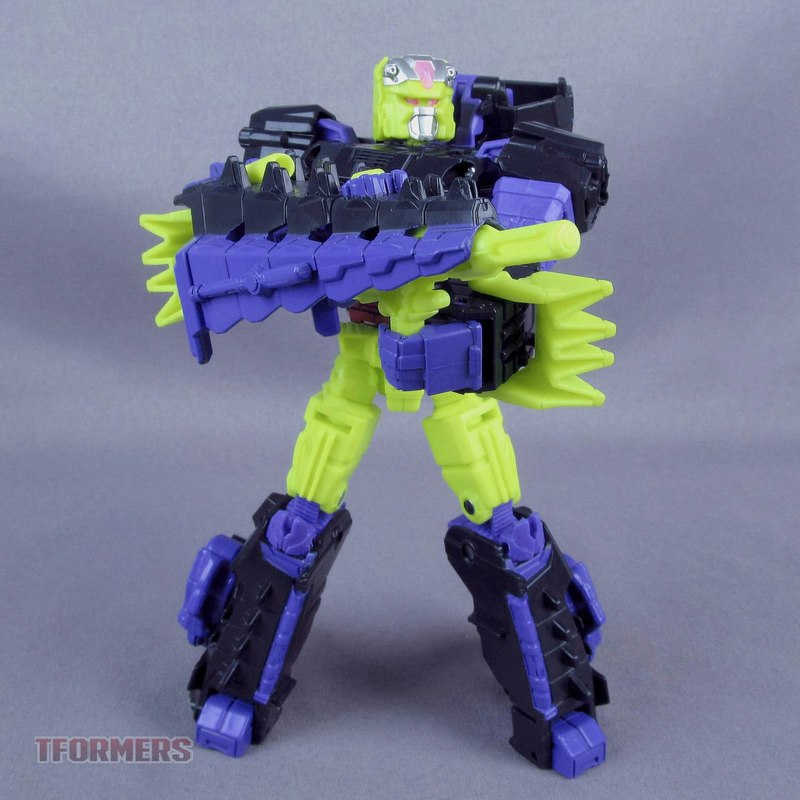 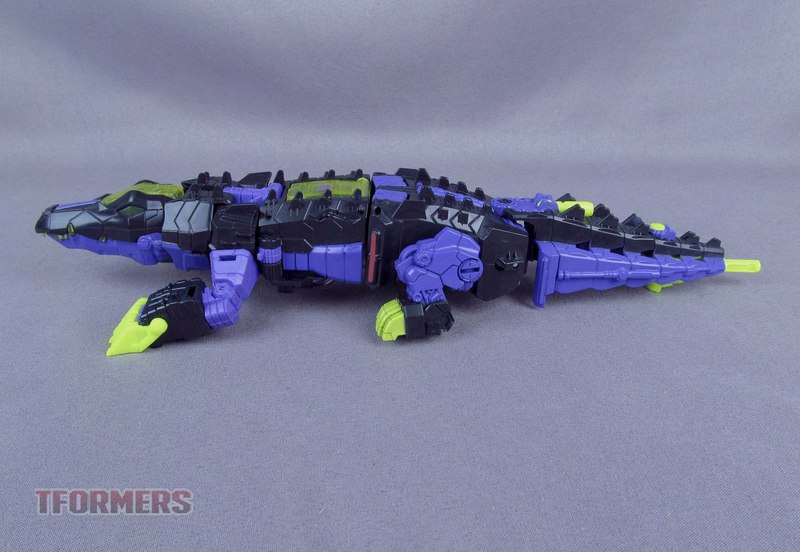 So here's where the majority of purple paint comes in. You want to know what parts aren't paint? The forelimbs, the hinge behind the head, and these joint parts in back. Anything else you see is painted. It's a really great color scheme, where allowing for a little compromise, it's basically suggesting a color split along the mid line of the body. The purple bands are interrupted in the back half of the body, but with the back legs painted in purple, it kind of still flows. The weak yellow paint for the rear claws is rather more unfortunate, though. 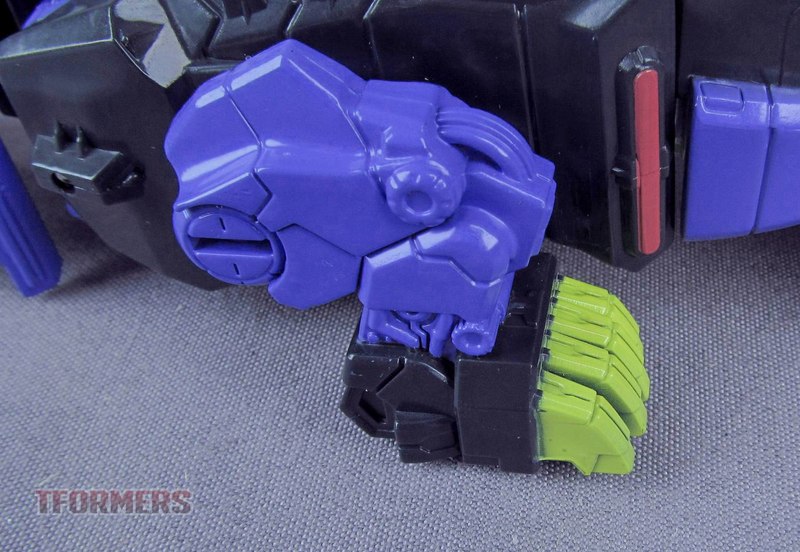 Krok has a clear yellow sprue, as you can see. This makes the canopy for the driver compartment look nicer. 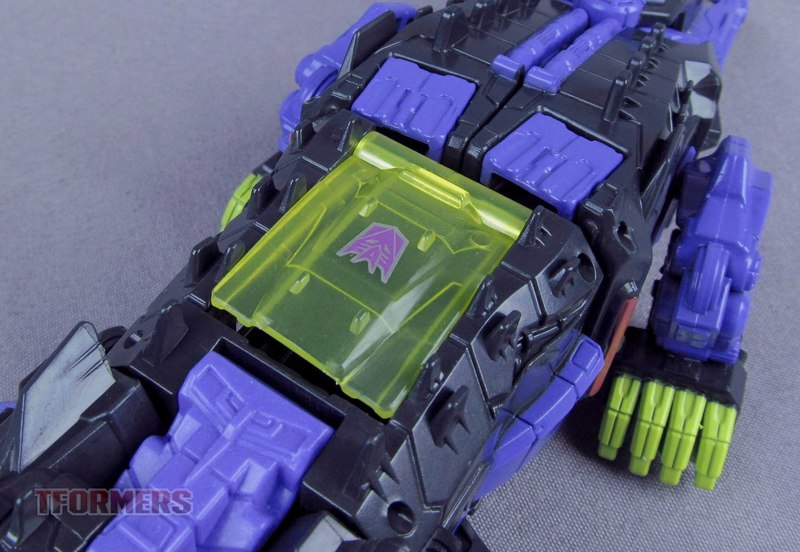 It also fits in well with the false window on the head. 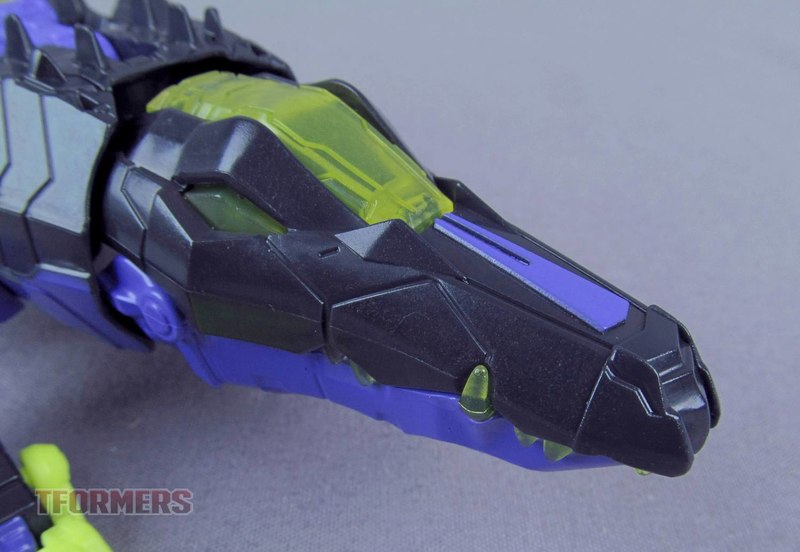 A bit weirder though is the inside of the mouth all being the same clear yellow. The yellow definitely makes the teeth stand out well against the head when the mouth is closed, but it looks weird the rest of the time. And these are still all flexible plastic parts - a rare instance of such in Transformers! 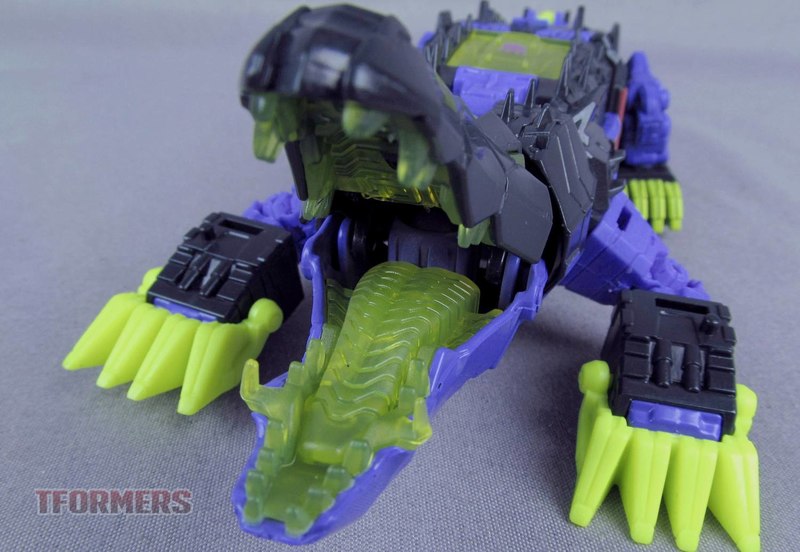 There's not much to say about the physical side of Krok's beast mode. Practical posing is still very limited by the back legs, which cuts down on the potential trouble areas. The robot legs lock in solidly as long as you remember to get the knee parts pushed in all the way. And the tail still rides up with wear.

The mouth can be hard to get open. The paint thickness seems to be making it wedge in the soft plastic of the teeth. It'll come loose though. Just be careful not to mash on the teeth while you're getting there, though.

Okay, let's recap! Krok fixes a lot of the physical issues with the Skullcruncher mold. It's a first retail-level update of an obscure late G1 character, and it has a faithful deco that is fit on to the mold beautifully. Go back a year and tell me that not only would there be a Titan Return Krok, but it'd be a seemingly ill-fitting recolor, and that when I saw it I'd immediately love it, and I don't think I'd believe it. But here we are, all of those things are true, and I'm just blown away by how nice this is. And relieved that I don't need to think about the hideously expensive subscription service Krok anymore! It's a shame that Krok and Quake are both short packed in wave 5, because they are the easy winners on deco quality for the whole assortment. And you know, since Krok was originally an Action Master, if you just can't get behind the crocodile mode, you can always pull off all the beast mode parts and pretend he still can't transform. You just can't lose! 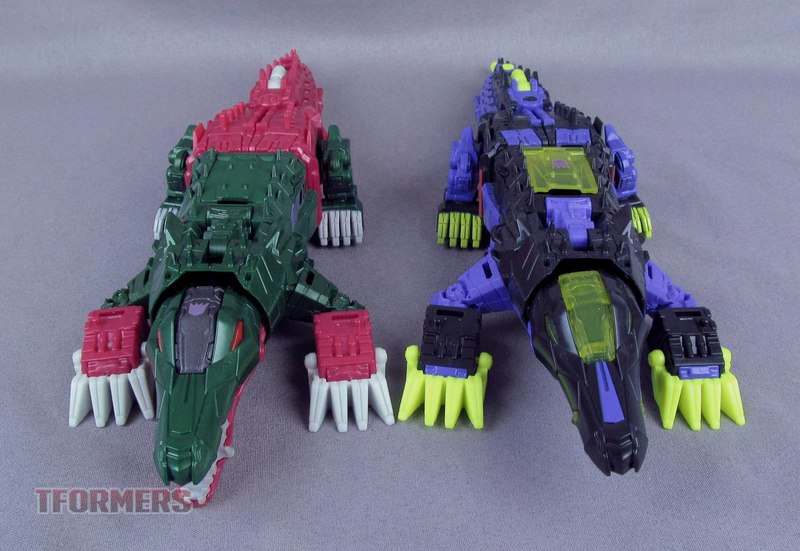