Optimus Prime and Pyra Magna meet at the singularity in the ruins of Crystal City to (hopefully but probably not successfully) settle their differences. As Starscream eavesdrops, Prime talks about the friends he lost in that place, including the story of how he met Bumblebee. Pyra Magna in turn has a story to tell, one about how the Torchbearers' current incarnation came to be. "Ghost Stories" is written by John Barber with art by Priscilla Tramontano and colors by Thomas Deer, Josh Perez, and John-Paul Bove. 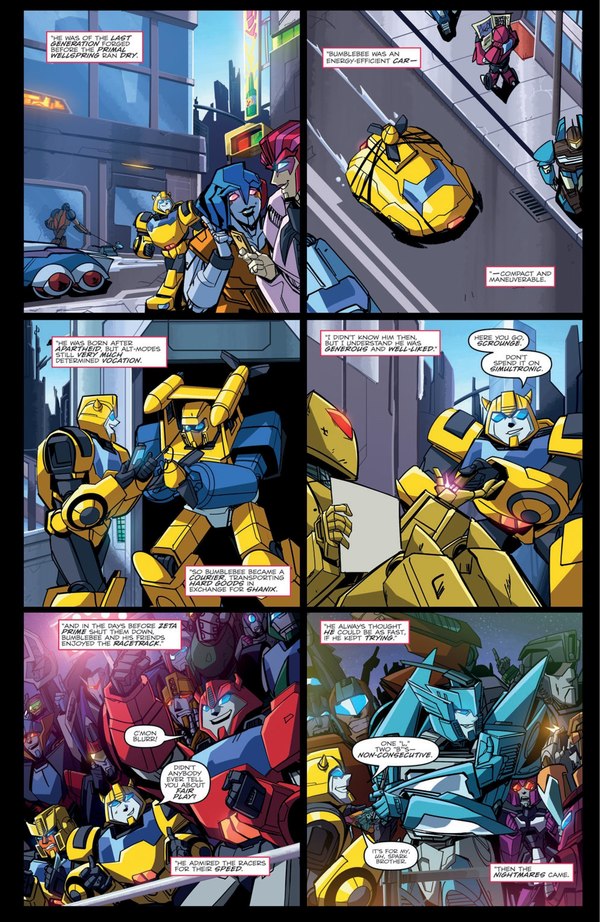 I love annuals. They tend to be either anthologies or longer self-contained stories than you can do in a single issue, both of which hold a lot of appeal to me. This is a little of both, with two short stories as part of an overarching narrative. The stories are well-chosen and do what they're meant to do: shed light on the backgrounds of some of our characters and help explain the characters' motivations and beliefs. Pyra Magna's is especially interesting, because it shows how her beliefs differ from those of the Mistress of Flame and the standard doctrine of the Way of the Flame. Like any categorization you can name, there is more variance among people of any single religion than is often captured in fiction, and it's nice to see that difference represented in a deeper and more complex way than a simple good guys/bad guys split. That's good science fiction writing!

Overall the Caminus flashback is the more compelling of the two, in fact. A lot of that comes from the fact that we haven't seen nearly as much of Caminus' past and none of the Torchbearers' as compared to our steady - but always enjoyable! - stream of Orion Pax flashbacks. But the Pax flashback here is still a lot of fun, and does help to establish both where Optimus is coming from and how Bumblebee became the person he was. It's also probably the most I've enjoyed Prowl in a long time. His part is not terribly large - which likely helps - but it's fun to see the roots of his later choices in how he treats people here.

It's so nice to see Priscilla Tramontano on interior art again. I enjoyed her work on Windblade Vol.2 and the Robots In Disguise tie-in comic, and any time she's on interiors I'll be happy to read it. And this annual lets her show serious range, with a broad range of different moods, characters, and locales. About half of the issue focuses on Bumblebee, and I like how she draws him. Everything in here looks appealing, in fact. I like designs that manage to be imposing or frightening without being repulsive. Things don't have to be ugly to be scary, and there's a good example of that in here.

Each of the three segments has a different colorist, and that's a good move. Josh Perez makes Cybertron in the days of Orion Pax(Supercop) glossy and bright, while John-Paul Bove gives the rugged and bleak frontier world of Caminus an appropriately muted look that the characters - especially the brightly-colored Torchbearers - stand out against. Meanwhile, Thomas Deer ties it all together with a modern Cybertron neither as bright as its past self nor as harsh as Caminus. It's fun to see how different coloring affects a single artist's work and creates a different mood for each part of the story.

The main cover for the issue has art and color by Tramontano, an image worthy of a stained-glass window displaying Bumblebee surrounded by scenes from his life as defined by the people he was with... and Optimus Prime and Pyra Magna stading on either side, alone, glaring at each other past Bumblebee. What a beautiful image, and one that speaks volumes. Andrew Griffith's subscription cover (...how do you subscribe to an annual?) shows Orion Pax, Prowl, and Bumblebee in the days of Cybertron's past, loaded for bear and about to make an arrest where heavy resistance is expected. Coloring is by Josh Perez in the Marvel style, from Bumblebee's yellow face to the newsprint finish to the whole piece. So much great art in and on this comic.

I really enjoyed this. Its lasting effects on the monthly titles will be better understood as time goes by, but also it serves to shed some light on the conflict that I expect to become central to the Optimus Prime comic: the schism between Prime and Pyra Magna. And the art is great. This is the first "annual" since Robots In Disguise and More Than Meets The Eye had them back in 2012; let's hope that they start living up to the name, because I'd be more than happy to supplement our current full schedule of quality Transformers comics with yearly specials like this.