I've been wanting a new Voyager Megatron for a while, something closer to IDW's take on the character. This one's not exactly what I wanted, but it's serviceably good in the role, and growing on me. 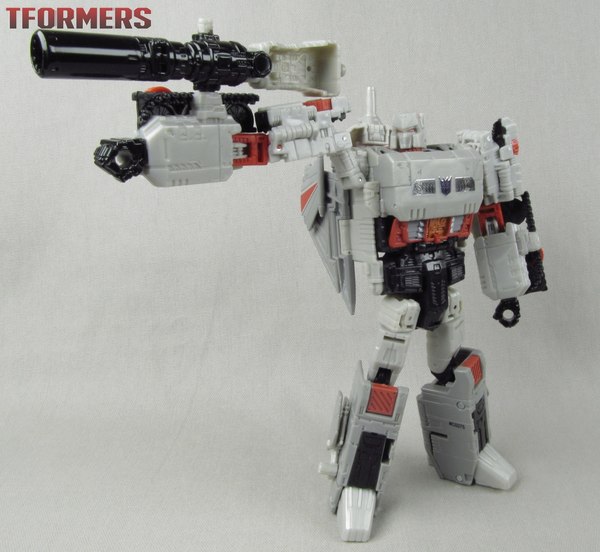 Click on any image to go directly to a full gallery with larger images! 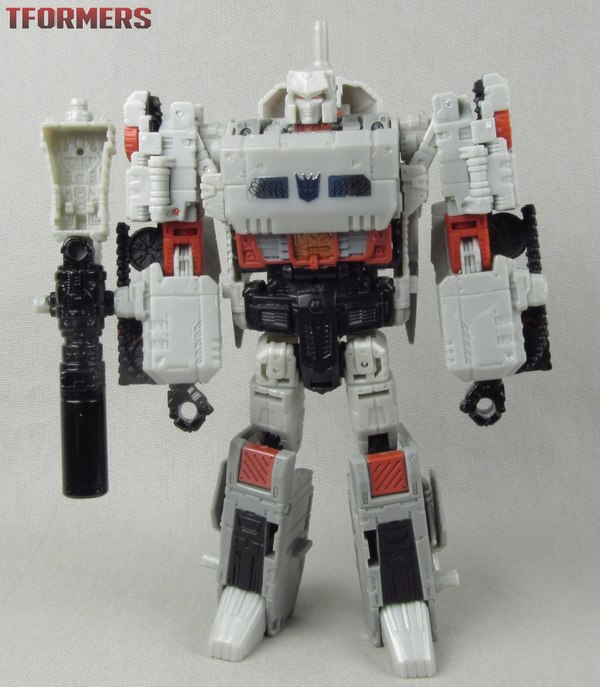 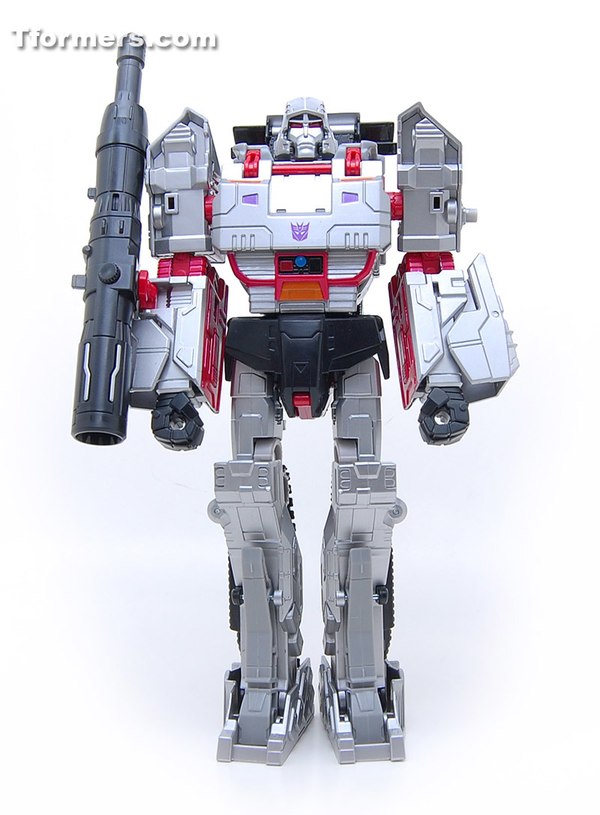 Titans Return Megatron is superficially similar to Combiner Wars Leader Megatron, mainly by virtue of both of them being G1-styled Megatron figures that turn into tanks. But aesthetically there was something about the Leader figure that was off to me, and this looks much better. It has that issue some Transformers have of having body shapes just sculpted onto the surface of differently-shaped parts, but I don't think it hurts the figure much. The thicker arms, broader shoulders, and smaller head all read as more powerful. 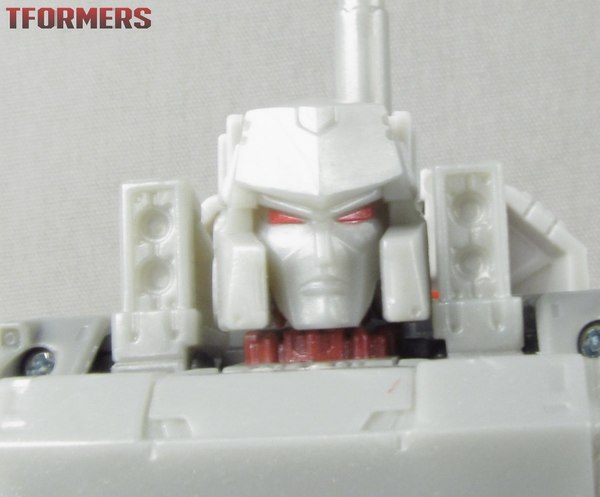 And the face sculpt is great. It puts me in mind of Megatron's G2 comics prelude appearances in GI Joe. The bare silver plastic hurts it a bit, though. I'd love to see TakaraTomy take a pass at this. He also has pop-up earmuffs like all the other Voyagers, with a hidden activation switch. They're a little bit more touchy to lock down than most, and there's no swiveling platform to restore neck articulation. He looks better without them, anyway.

The head swivels freely, and that little strip of red for the neck really helps the look of the toy somehow. The shoulders are set very high for the purposes of transformation, but that makes for really good Fusion Cannon Pose. Forward movement isn't as good as the lateral range, though, due to the shape of the transformation mechanisms. The upper arm swivel is stiff but good, though the upper arm may try to unfold as you use it. Elbows are fine. No wrists. The forward range of the hips is good, though like Optimus, they're not as stiff as I'd find ideal. Lateral range is stiffer, and good. Thigh swivels are stiffer still. The knees are technically double-jointed for transformation, but you're not going to get much out of the lower joint. The feet are angled for dynamic posing, but like Prime, the blocky legs mean they're not terribly limiting.

First alternate mode is the tank. Remove Doomshot and the Fusion Cannon. Open the backs of the legs and fold in the feet. There are notches on Megatron's hips that correspond to tabs within the lower leg. These tabs must be locked into place for either other mode to lock together properly. The double knee is stiff enough that massaging that last millimeter out of it can be difficult. Once you've won that fight, lock the legs to the crotch and each other, and swing the tailfins outward. Pull the chestplate downward. Unfold the treads on the shoulder and forearm, and align the tank treads. Accordion out the shoulder assembly and lock the fist onto the 5mm peg, making sure the fins align with the slot at the front. Fold the wings down around the semicircular pegs on the shoulders. Turn the turret around, and lock the front end of the Fusion Cannon over the vestigial tank cannon. 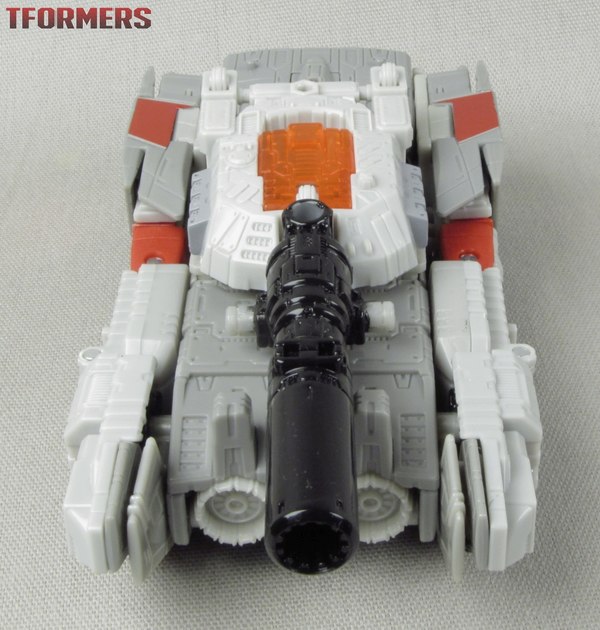 This is not the best or most accurate tank in Generations - and that is kind of a strike against it with as tanky a line as this has been. The back end is so clearly made of jet parts. But I kind of like it anyway, and at least it's not another H-tank. The turret swivels freely, too, with a little manuvering to clear the jet cockpit or the notches at the front of the tank. 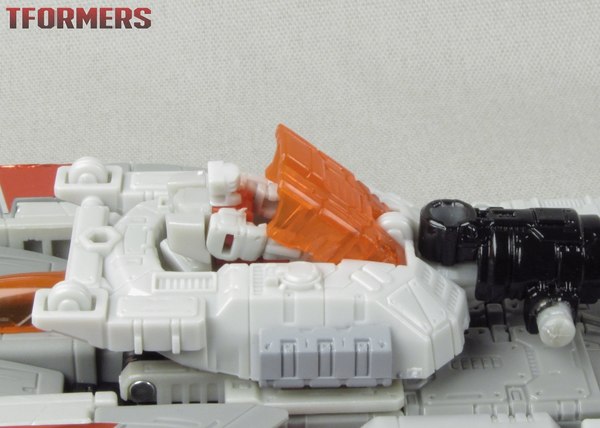 It kind of bugs me that Doomshot isn't fully enclosed, but the requirements of triple-changing make that impossible. The other gun in the Fusion Cannon assembly mounts neatly on top of the main gun, giving you a seat for a co-captain. There's some pegs for mounting Titan Masters as well.

Folding the chest down as the instructions indicate can create clearance problems for the wheels if the legs aren't aligned 100% perfectly. Putting it back in the robot mode position fixes this.

For jet mode, remove Doomshot and the guns once again. Unfold the wings, and fold up the treads underneath them, locking them to the shoulder pegs. Flip the tank over, and unfold the tailfins. Now, pull loose the entire side of the figure, below that shoulder peg, and swing it around 180 degrees, locking it back down under the tailfins. It'll all need to be aligned perfectly, but that's not terribly difficult. Lastly, pull back the turret and unfold the nose of the jet. 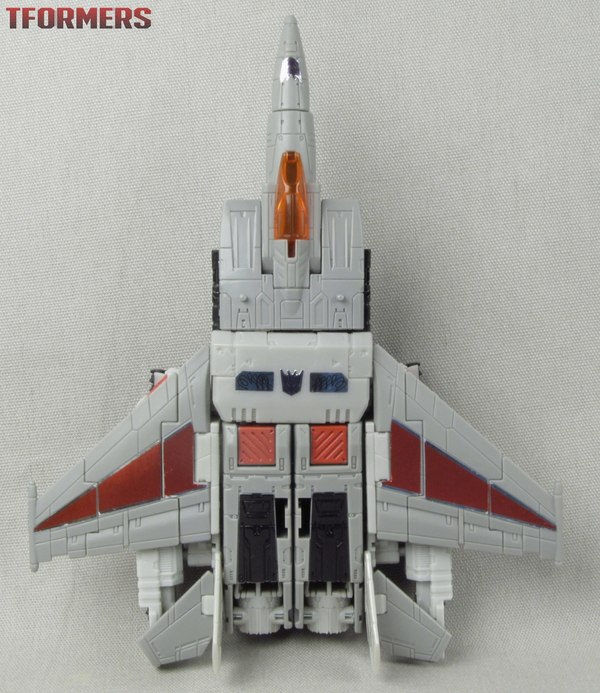 As with Optimus Prime, Megatron actually makes a much nice looking jet than he does a tank. The dark gray on the figure all comes together here, as do the red parts and red stickers. It's a really attractive jet. From the top, as is typical with Transformers Jets. The Titan Master pegs from tank mode carry over here. 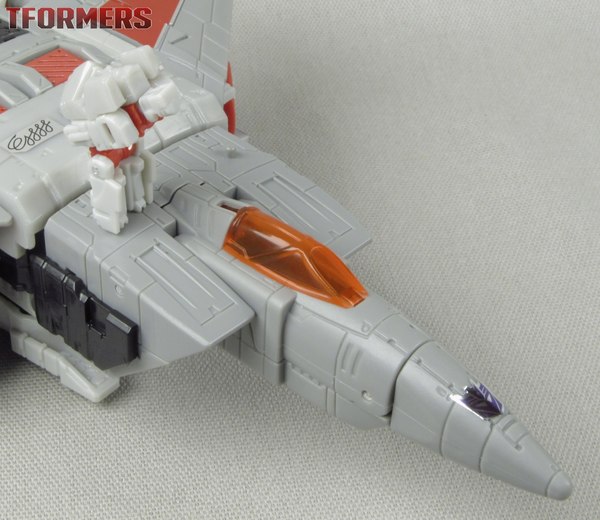 The cockpit canopy is technically too small for Doomshot, but you can open up the nose via the transformation mechanism and seat him inside. 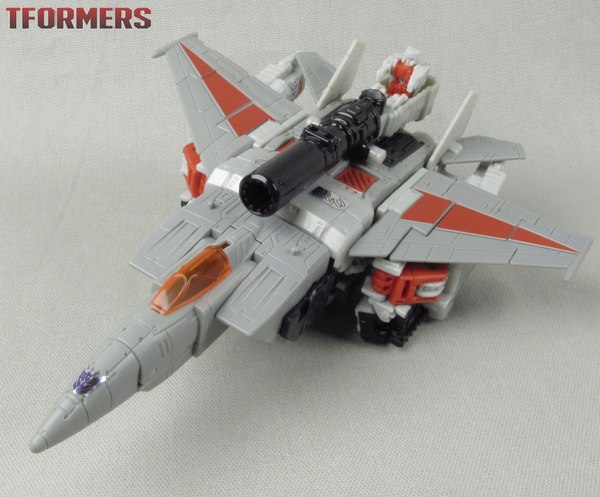 The Babyseat Gun part of the Fusion Cannon assembly locks to the top of the jet if you prefer a more inelegant alternative. You can also put the entire Fusion Cannon up there, though what the instructions suggest is to attach the barrel part to the tank turret. Again, inelegant: this leaves a fully-painted piece contacting the table. 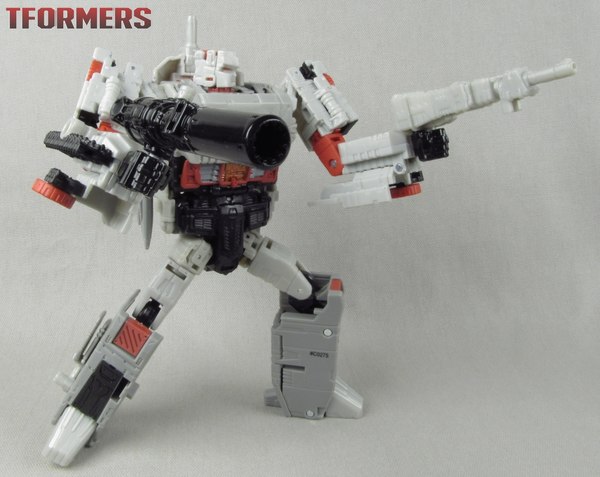 There's not much left to tell you about the Fusion Cannon accessories. They can also be used separately, but fit together in a nice, familiar shape that fits on the side of Megatron's arms. Though you can also do it the other way. Looks kind of dumb that way, in my opinion. Maybe Blitzwing's version of these accessories will make this configuration more valuable. In addition to the forearm mount, there's a pair of 5mm sockets for shoulder mounting, G2 style. Maybe we'll see this Megatron again in one of the Titans Return boxsets? 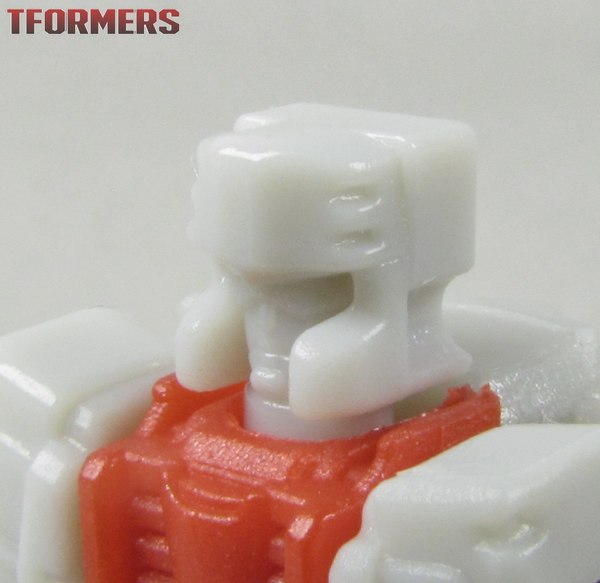 Doomshot is rather clever. His head is primarily designed to resemble G1 Blitzwing, as that is who the Megatron mold will become in Wave 5. But the headsculpt is just vague enough so as to also resemble Megatron's helmet. Otherwise he's unremarkable as a Titan Master, except that his right arm was so loose I almost lost it when it fell off. So that got a good coat of clear nail polish.

Plastic tolerances hit a few rough patches on my Megatron. Besides Doomshot's arm, one of his wings likes to fall off. It's not universal, but I have heard from a few other people who've had this problem, so I thought it best to mention it. Also, while it's not as pronounced as on Optimus Prime, the foil stickers are starting to peel already. 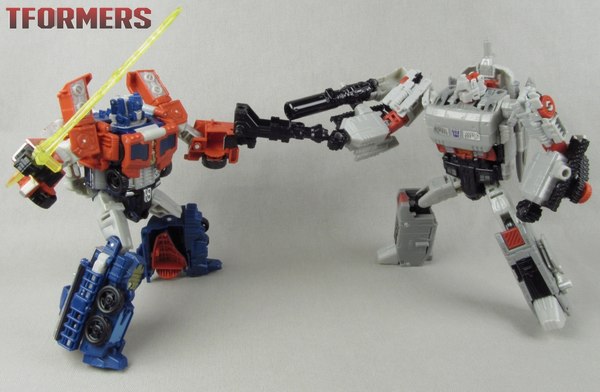 There've been enough takes on Megatron over the years that no one version will likely be perfect for everybody. This one has an overall look and body shape that I'm pretty happy with, though if I had my druthers I might like the legs and back end of the Fusion Cannon assembly to be black. But the flaws it has are mainly specific to my figure, weakness of the Tank Mode notwithstanding. But for a mold primarily intended to be Blitzwing? It makes a pretty great Megatron!