Till All Are One Issue #10 - Generations - IDW Comic Book

With new threats looming in the wake of recent events, Starscream turns his focus back to creating a powerful defensive base to protect himself, and maybe Cybertron as well. And all it will take is changing the mind of one enemy - with a bit of specialist help. "The Price of You" written by Mairghread Scott, art by Sara Pitre-Durocher, colors by Joana Lafuente. 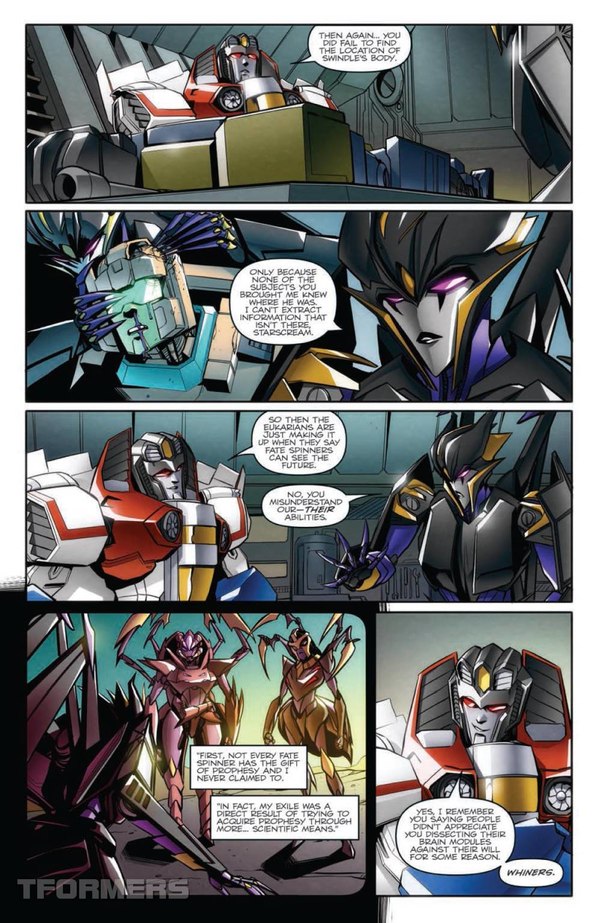 Mairghread continues introducing Transformers Prime characters to the IDW "G1"-flavor universe with the debut of Airachnid this issue. She's Eukarian, and has mnemosurgical abilities, which allows for an interesting different take at the character. This Airachnid wants to plumb the depths of lots of brains to find a guiding pattern from which she might be able to predict the future. I'm not entirely clear on how that's really expected to work, but I don't feel like that's really the point anyway right now. It's an interesting concept, and manages to quickly establish some of the fundamentals of the character before getting down to business. This freedom from moral concerns is an important thing, and is surely why Starscream put Airachnid on the payroll. Starscream wants the Combaticons on his side, which means playing around with their brains to convince them they've always been Starscream's loyal personal guard. It makes Airachnid a really great introduction, because what the overall story requires is exactly the things that she can bring to the table without really altering the origins of the character in any meaningful way. I mean yeah, it's a different Airachnid so this one needn't necessarily be beholden to who the other one was, but at that point you'd start to wonder why it even needed to be Airachnid in the first place. No, see, this is good how it's played out. I'd kind of had the fear beforehand that Airachnid's involvement would be kind of superfluous and not matter to the story in any substantive way, but I'm glad to have been wrong. She slots right in and feels perfect for the role. And while being a bit, um, flexible with ethical matters, let's say... there's not the inherent evil overtones evident in the character so far, which leaves lots of room for new, interesting development down the road.

As a couple of the covers might already indicate, Blast Off has some importance to the whole plan. I don't want to go too much in to how that plays out because it's worth seeing fresh for the first time. But it is a solid payoff to a lot of the Combaticon characterization that was presented from the start of the Bruticus arc, and just dives in deeper in some places. And we get an extended sequence focused on Blast off and Starscream that's a really great read for pitting those two against each other. I really regret that there's not a whole lot in particular I can say about this issue's writing without giving away details that I think are too good to spoil, but that by itself hopefully expresses adequately how good I think the writing really is. There's a lot of substance packed in this issue and a lot of stuff that this puts in place that can keep threading through moving forward. I don't think this is the set up phase for an immediately launching next story arc either - or at least not one specifically around the Combaticons. And that makes this attention and foundation-laying all the more interesting.

On the art front, Sara obviously loves drawing Starscream. There's a lot of great Starscream panels, but that's nothing new. I really do love that one panel at the end of the last page of the preview, though. Airachnid is looking good. Sara can bleed an expression from a rock if she had to, so it's no surprise that Airachnid with her Prime-style face design, all angles and points and lacks of noses has managed to get some nice expressions. I like the basics of the character design too. A little more smooth-simple than some of the other character designs, so she stands out as a tiny bit foreign while staying a stylistic match. I'd say the real focus of the art though is Blast Off who gets a huge amount of visual attention: A wide range of body language and facial (and faceplate) expressiveness brings Blast Off alive in a really fantastic way. You'd almost think he was a favorite of the artist or something, huh? Joana's colors tie in here too for most of want I want to call out. Blast Off's part of the issue has a really nicely executed shifting of color temperature throughout that's reflective of Blast off's mood or emotional state - starting with a soft, warm tint, to cooler, and even to hot reds. It's a great, fairly subtle thing that plays perfectly in to the context. Joana is a brilliant color artist, and little things like this make such good evidence of that fact.

We have two Sara covers this month! Both of them reveal the presence/involvement of Airachnid in slightly different ways. The incentive cover features the inert form of Onslaught, while the main cover has Blast Off and Onslaught together - also carrying on the series of like-themed covers from recent issues. Both have Sara's beautiful painted style of coloring, and are wonderfully composed pieces. I think I like the incentive cover just a bit more, but either one is a great piece of art. The subscription cover is by Priscilla Tramontano and is a nice group portrait of the Combaticons, with an interesting stylistic choice applied to Blast Off that ties in to the context of the issue's story. It's a solid round of covers for this issue no matter which option you're able to select from - gotta love such an artistically strong title as this.