First up, thanks to Hasbro for providing us with a review sample of Primitive Skateboarding Optimus Prime! 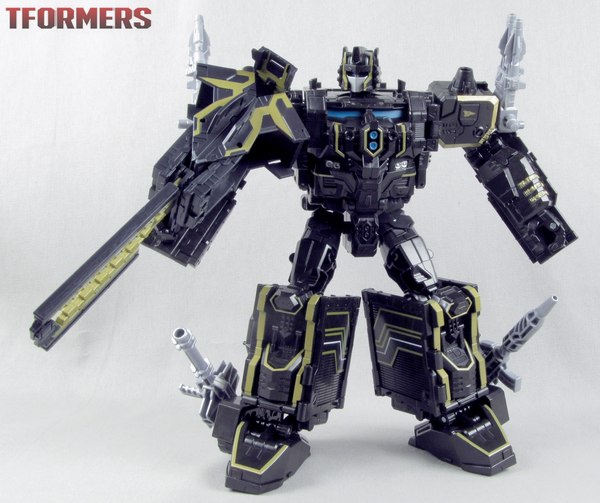 Click on any photo to go directly to our 100+ image gallery of the figure!

I've really been looking forward to this one. If you're into the fun, goofy kind of SDCC exclusive, this might be even better than Combiner Hunters. 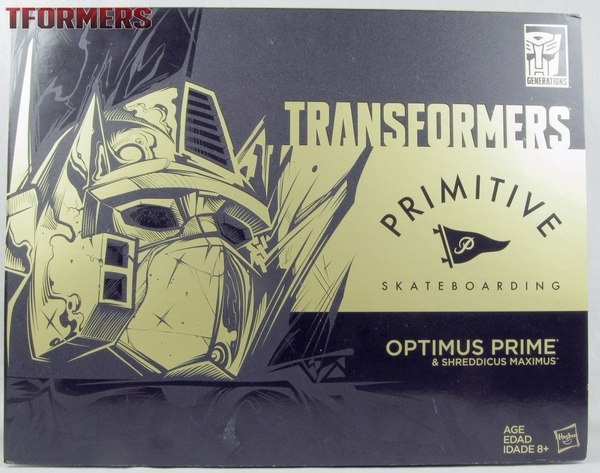 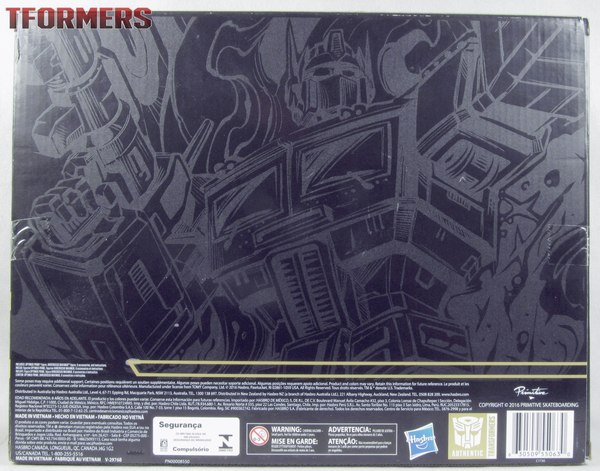 I don't usually do this, but let's take a look at the packaging for a minute. I hope my lighting can pick up the difference between black and black... but there's a lot of detail on here front, back, and under the flap, all using a textured finish to differentiate the two shades. It doesn't just look good, it feels neat. 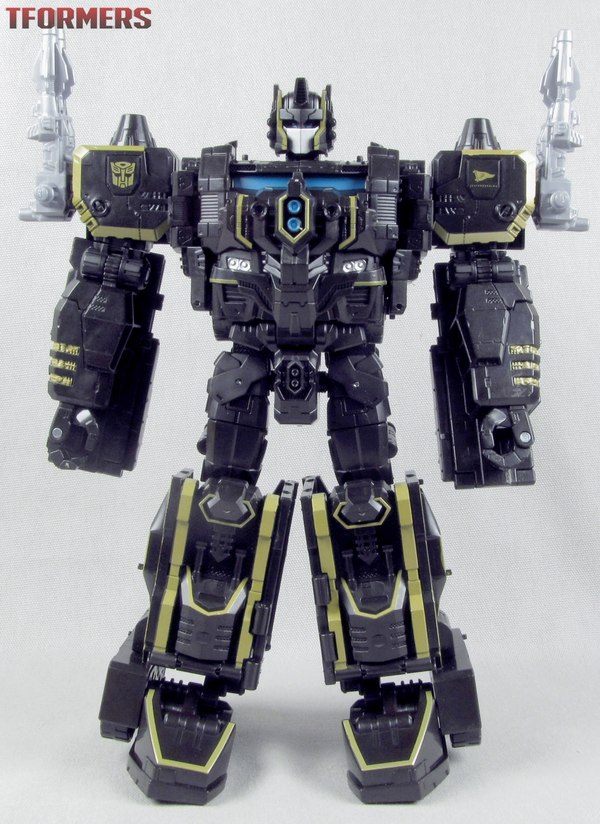 And there's our figure. One of the most impressive things about this set is that Hasbro and Primitive managed to get us hyped for a black and gold Optimus Prime repaint, one of THE go-to color schemes for robot toy repaints. 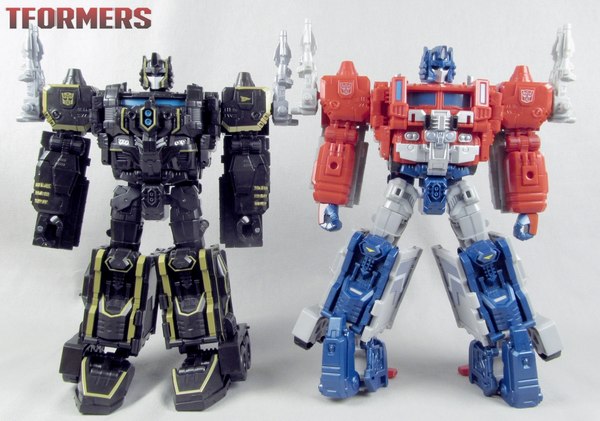 Primitive Prime is a recolor of Titans Return Leader class Powermaster Optimus Prime. If you've only handled the Super Ginrai/Magnus Prime version of the mold, here's some key differences to the robot. 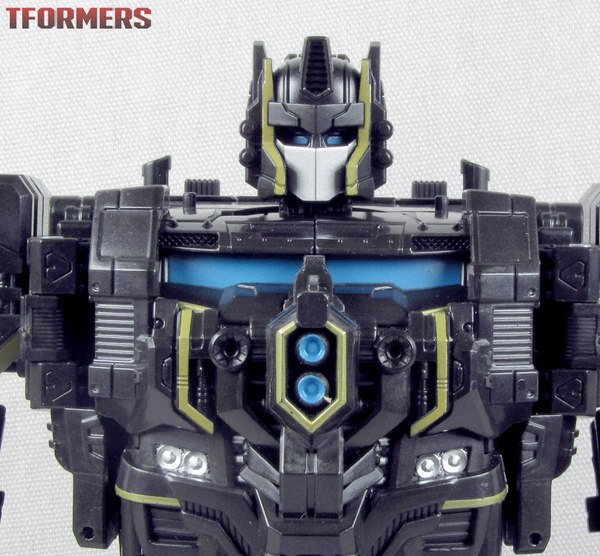 The chest and cab are different than Ginrai's. Despite the smaller windows or perhaps because of them, the blue really pops here. 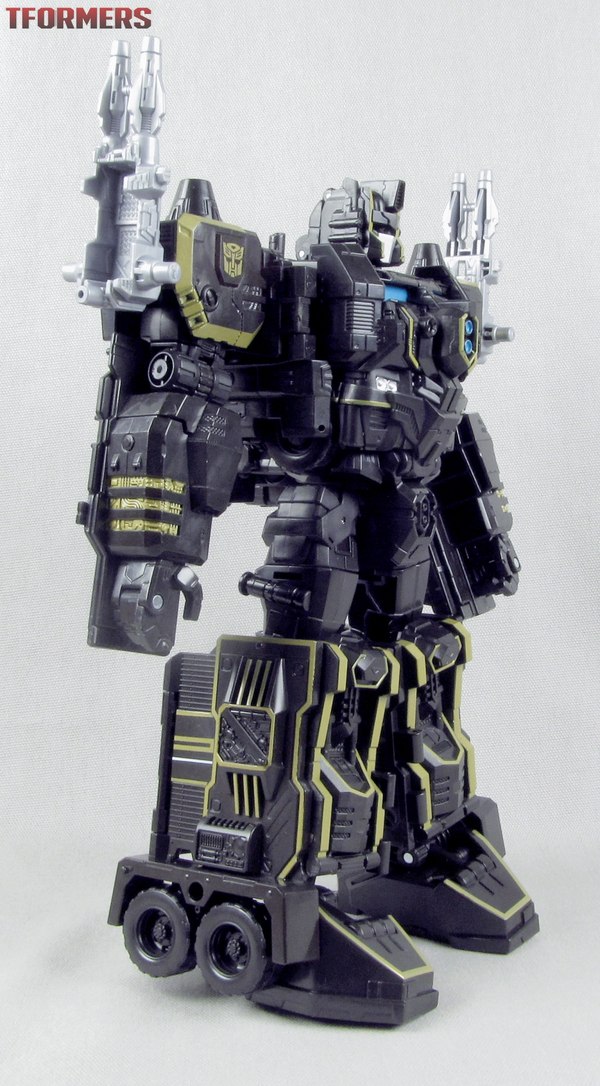 It retains Combiner Wars Ultra Magnus' hands and feet. The hands... that's kind of a shame. They're still somewhat touchy though Hasbro did make some improvements. The feet are a mixed bag. There are fewer truly good angles to pose them at. He'll generally stand fine, but some positions look awkward. But they look so much more like feet, if Ginrai's funky hooves bother you, and I actually find it more stable in general.

The headsculpt is unchanged between the two versions, but I like the gold lining. It swivels fine. The shoulders are ratcheted on the forward axis but not the lateral one. The lateral range is fairly firm, though. The upper arm swivels work just fine. The elbows are a bit stronger than Powermaster Prime's, which is really helpful with the new accessory. The fingers are articulated as a single block, and that's about as effective for holding weapons here as it is on Gundam models. So, not. There's slots in the backplate to help brace the guns so they're less finicky than Magnus' hands. But the problem is not completely solved.

The hip ratchets are very strong, especially along the forward axis. The thigh swivels move freely - enough so that you can't really count on them to brace any given pose. The knees are ratcheted, and surprisingly effective for the lower legs literally being boxes. You can adjust the transformation joint for some foot finesse, but not a lot.

Transformation begins by spreading the ribcage, more or less. You can remove the Titan Master or leave it in. We'll leave it in this time. Fold the head in and close the cab, including the flap for the neck hole. Lift the cab out of the chest, and turn it around. Now it's time to start assembling the trailer by unwrapping the legs, straightening out the frame, and folding up the feet. Swing the side panels up. Now, pull the shoulders out from the body frame and bring them together. Unfold the panels on the forearms, and bring the trailer together. Finally, slide the cab out from the trailer. 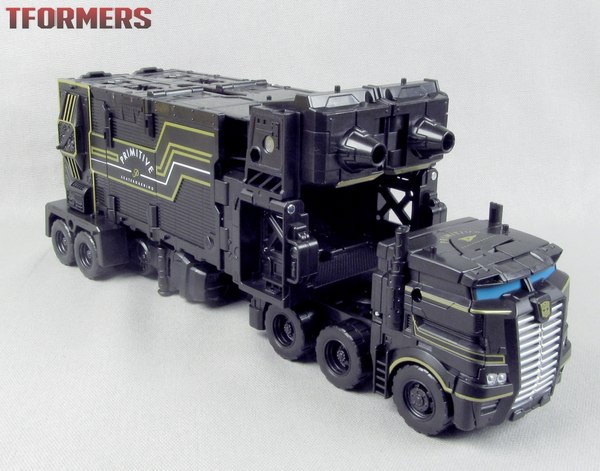 The truck mode is really nice, with the Primitive Skateboarding logo replacing the Autobot symbols and the simple gold outline defining Prime's usual stripe. Powermaster Prime's more aggressive looking cab works very well for this. The Powermaster Optimus Prime version of the trailer is much easier to assemble and more solid than than Ginrai's, incidentally. The trailer opens, and has enough space for Legends cars or compact Deluxes like Chromedome or Blurr. 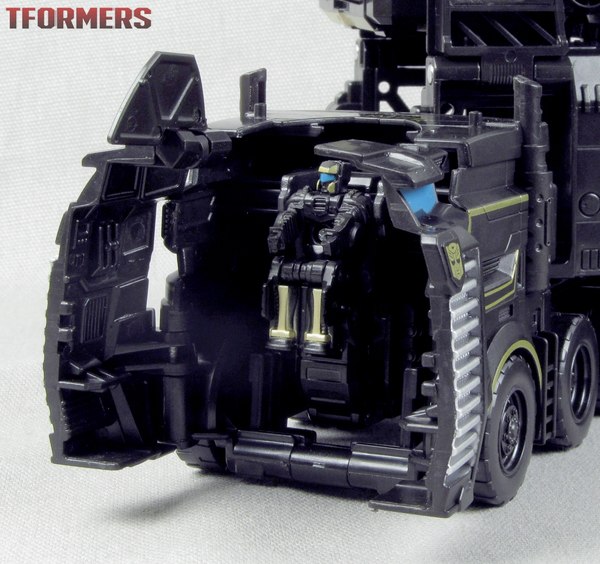 The cab opens for transformation. The neck joint doubles as a seat for a Titan Master, with slot to plug the heelspur into.

To create the base, pull the sides of the trailer out. Fold up the top flaps long enough to pull the arms out and swing them around so the flaps, once re-deployed, point upward. Raise the chestplate. Pull out the stand on the underside of the cab. Fold the rear hatch halves inward. Turn the legs sideways, and adjust the legs so that you have a pair of platforms on either side of the central block. 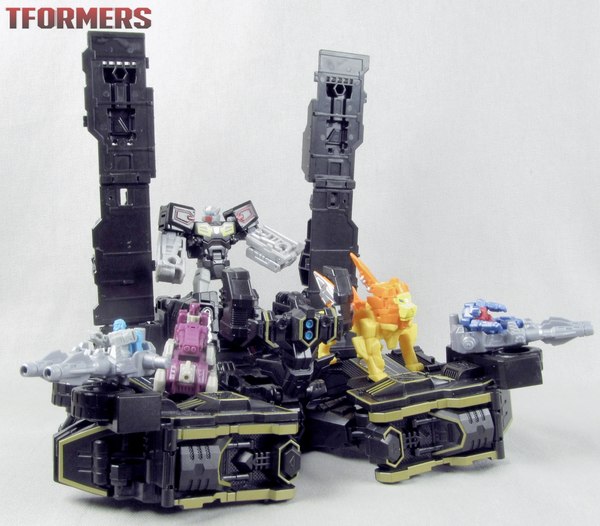 The base is a decent little platform for your Titan Masters. Not super-impressive or loaded with playset features (yet), but a good place to pile on as many of the little guys as you can fit. 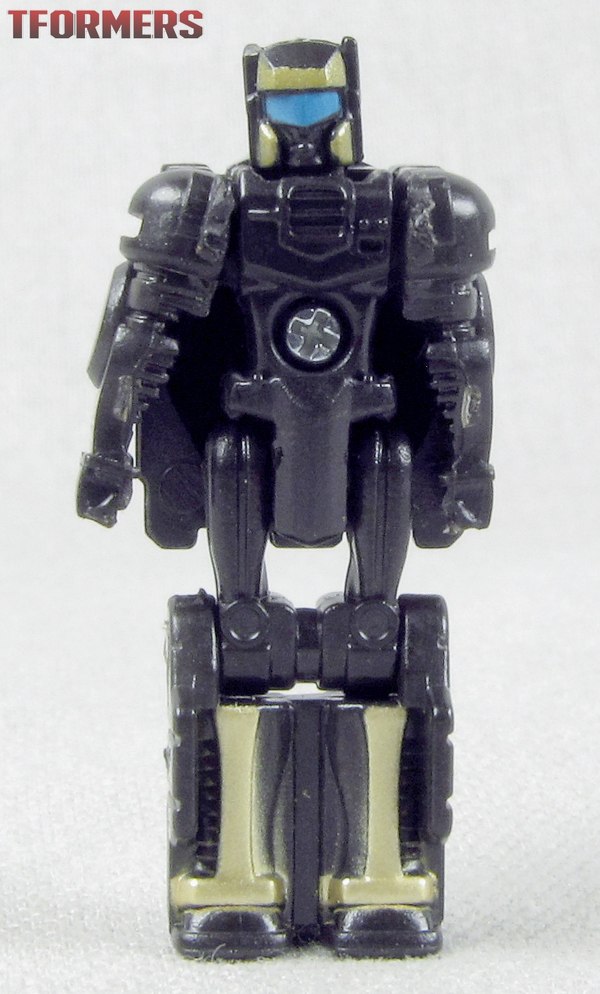 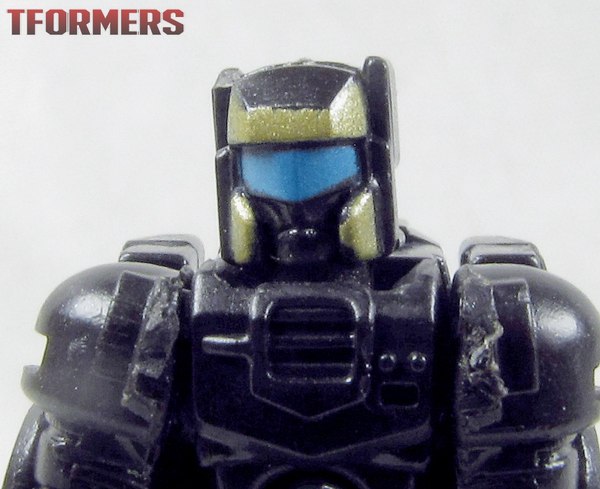 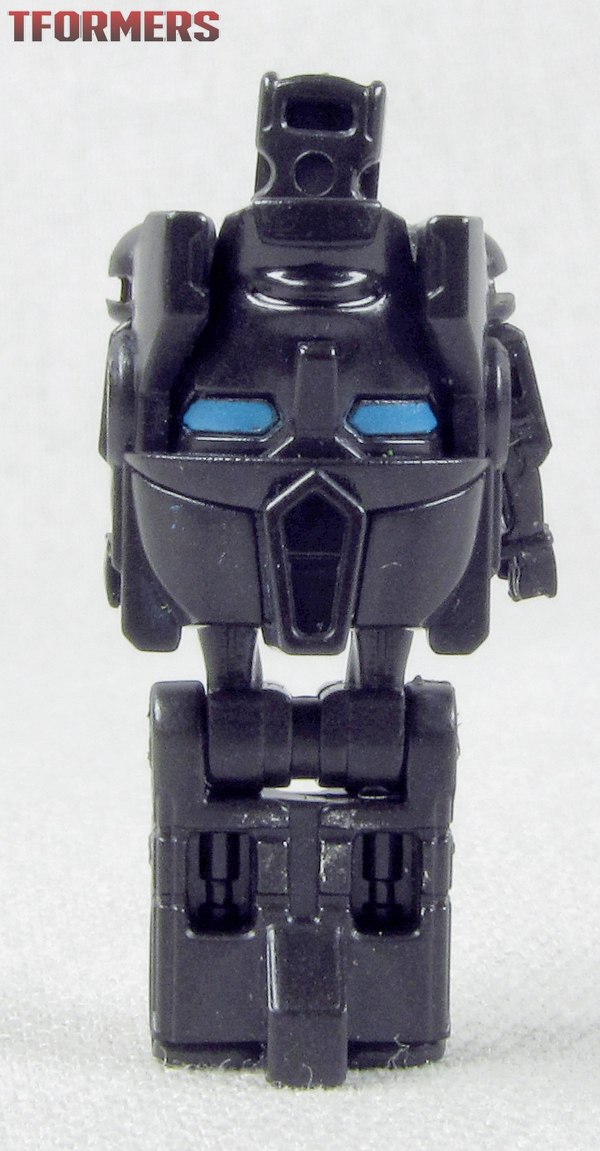 Speaking of Titan Masters, let's get to one of the reasons you're probably all watching this. Primitive Prime's Titan Master partner is Shreddicus Maximus, which is the best possible name. Just as with Prime's chest, the blue of his visor really does stand out against the black and gold. The faceplate is identical to Powermaster Optimus Prime's, giving us fully two masked and two unmasked Optimus Prime/Orion Pax face molds across all of Titans Return. The helmet fits pretty well, locking to the back of the Titan Master in back before lowering into place.

Primitive Prime retains all of Powermaster Prime's accessories. Which means two handguns that date back to Ultra Magnus. They do have some issues staying in the hand and always will due to leverage, but they're better than on Magnus with a very specific, largely stable position to lock the guns into. The longer rifle is pretty solid, but the shorter one which became the head of Magnus' hammer is still pretty touchy. The other accessories are his shoulder guns, a silhouette-defining aspect of Powermaster Prime. They were seats for small figures on the original toy, so they're right at home here. 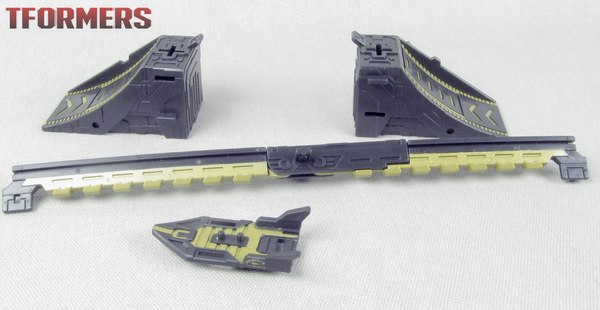 Onto the new accessories! This wouldn't be a skateboarding-themed Prime without a skateboard - and Shreddicus Maximus gets one that's very much based on Daniel's hoverboard from Transformers: The Movie. To go with this, you need ramps. So we've got ramps! And once you've got ramps you need a rail. So there's a rail! These can be combined together into a variety of useful configurations. 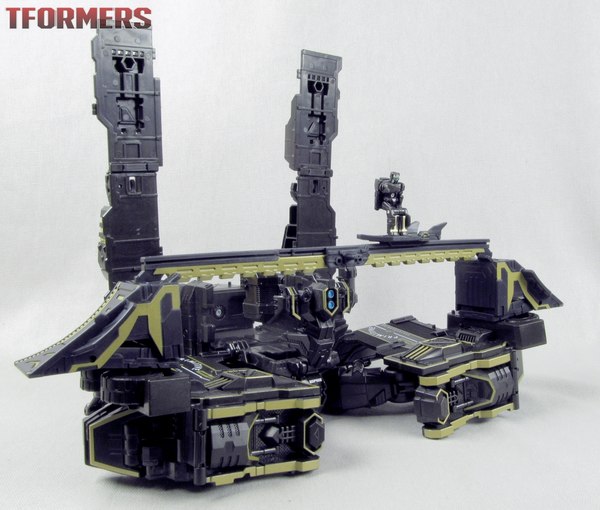 They can also be used to convert the base mode into a Skate Park, which also more or less makes this the best and most interesting Leader base mode in Titans Return by default. 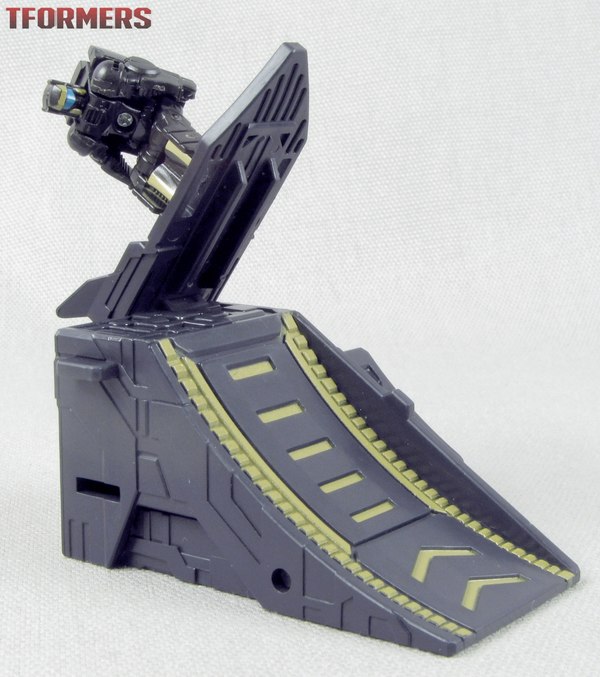 One side of the instructions gives a handy list of Cybertronian skate tricks. I have no idea how you're supposed to replicate half of these with this toy. That said, the hoverboard is pretty cleverly designed. There's a variety of sockets on it that correspond to tabs on various parts of the ramps, allowing Shreddicus Maximus to grind in a variety of ways. There's also a set of ridges on the bottom that secure the board to the rail. 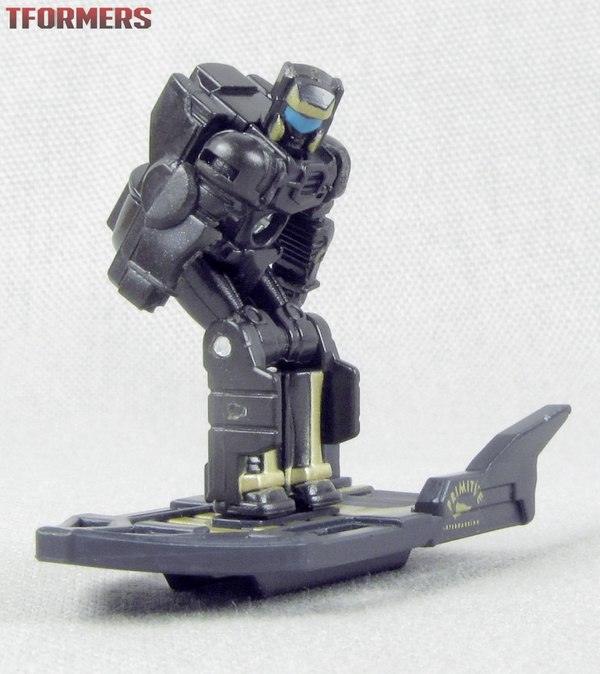 I only wish there was a way to make Titan Masters look more dynamic on the thing... 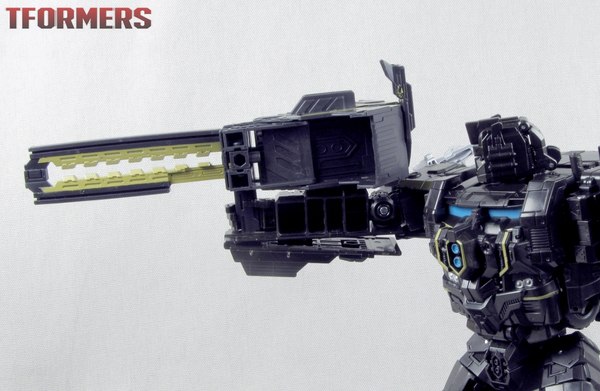 Of course a giant robot has no need of tiny ramps or rails. So you can combine them with the hoverboard to make a massive railgun! You laugh - I hope - but it really does look like it's designed to magnetically accellerate a projectile. It's designed for the US mold's hands, so it's not going to see a lot of cross-play use, sadly. And okay, it looks a little kludgey. But big guns are fun, and it means the themed accessories work and have a place to be in all of Prime's modes. I love that.

Everything about this is great. I really enjoyed the Powermaster Optimus Prime mold anyway, and the new paint job and new accessories add something special to make this a memorable exclusive. The price was excellent as well, costing only $50 if you were lucky enough to get it at SDCC or off of HasbroToyShop. That's a whole $5 more than it cost as Powermaster Prime, and those new parts are definitely more plastic than a Titan Master vehicle. It's unknown if it'll be available again... but I hope so. This is a really fun toy and I hope more people can get it. 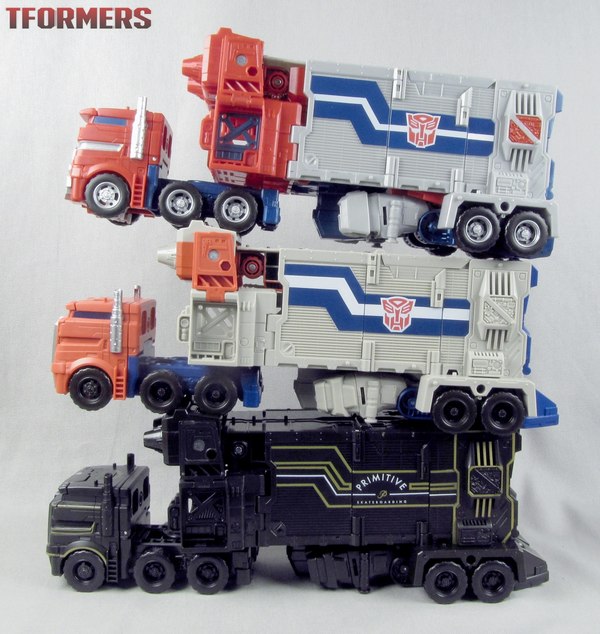