Thanks once again to Hasbro for providing us with review samples! 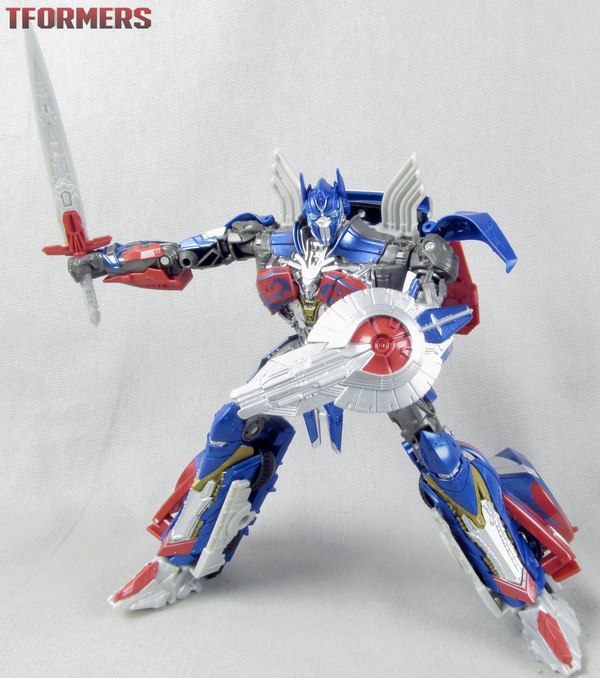 Click on any photo to go to the full gallery!

So my last review was of a toy that is an imaginative recolor with new accessories and a resonable price. This? 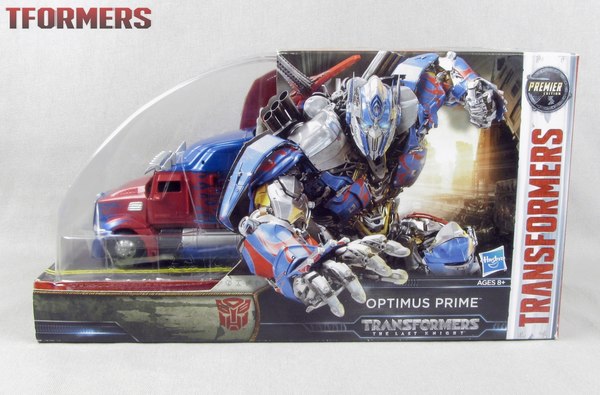 Is a $50 Voyager. But at least it comes with something nifty in the form of a real piece of tire used in Transformers The Last Knight. Let me look in here... 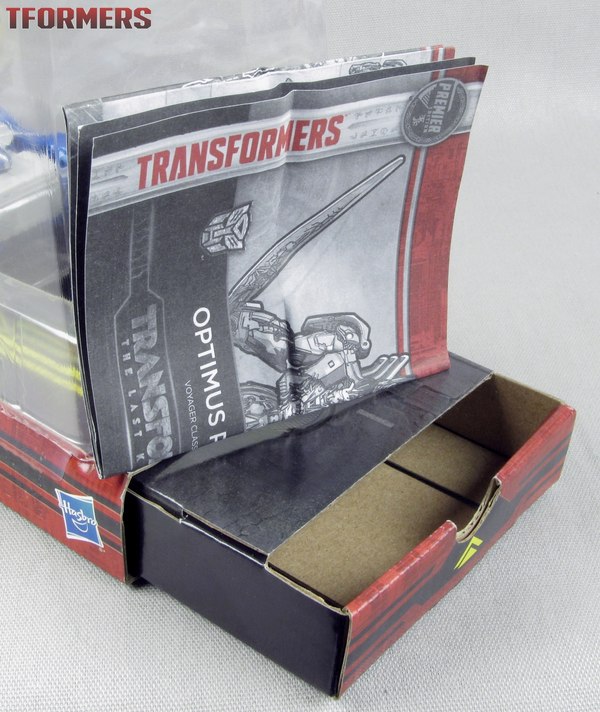 So, the HasbroToyShop listing for this Optimus Prime makes no mention of the tire chunk, but does mention a "Gift with purchase while supplies last." It's possible that as a review sample Hasbro held my road debris back for a paying customer, and I'd be fine with that. But I'd recommend taking the website at its word that you have no guarantee of getting that bonus. 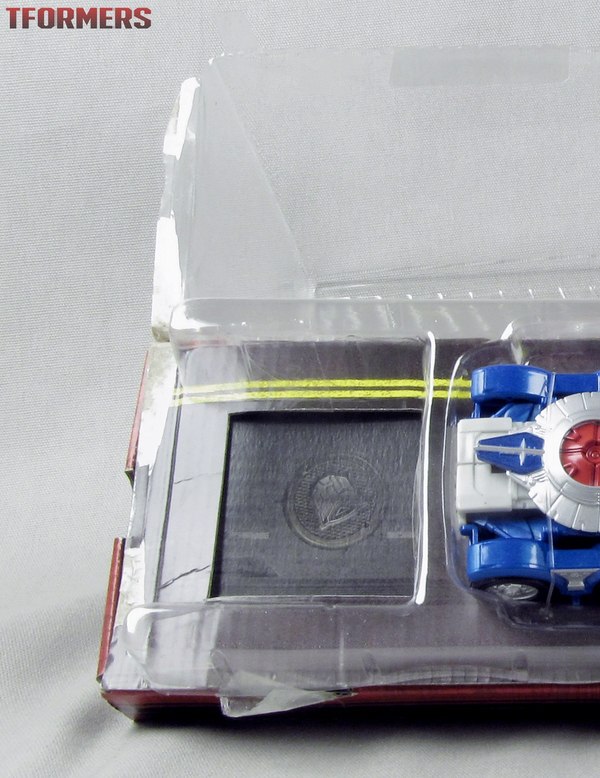 On top of which? It is nearly impossible to get the truck out of its bubble without damaging the packaging. The tape damage on the front is on me, but see that tear at the back? That's because the bubble is glued down there, like a blister card. And on a blister card for a $17 toy I find that acceptable. Here, you get an outer sleeve to cover it, but I still feel as though that's not acceptable on a fifty-dollar toy. 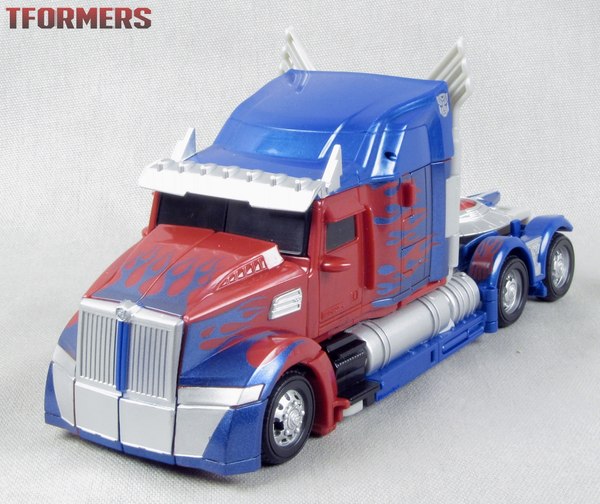 What are you guaranteed to get for fifty dollars? Mainly different paint on a decent Voyager class toy. In this mode not a lot of the new paint's even visible. You can see the new paint job for the shield, but for the truck itself what we've got is a few spots of silver. 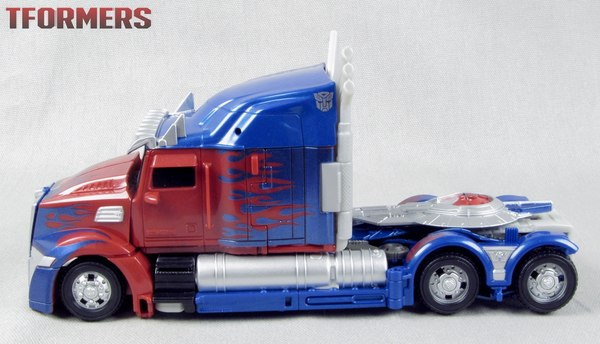 It's not a bad deco, that all said, with the new silver spots plugging a few budgetary oversights in the retail release's appearance. And the metalflake blue is pretty attractive, even if it doesn't quite match itself around the roof. It's a decent looking truck, based on the model that Optimus Prime changed to in Age of Extinction and has carried over to The Last Knight.

Okay, so here's strike three: It comes with the stock instructions from the standard Premier Edition Voyager release. Premier Voyagers are packaged in Robot Mode, so the instructions go from Robot to Vehicle. So you have to reverse them to transform this.

So let's fix that. Lift up the top of the truck. Pull back the side panels and fold them behind the back of the cab. Separate the two halves of the rear end of the truck. (The trailer connector may pop off, the ball-joints are rather shallow.) Separate the upper panels from the nose of the cab, and swing the cab halves to the back. Turn the grille segments around. Swing the halves of the trailer connector to the inside of the leg. Turn the feet around, plug them in, then plug the cab hunks into the calves. Turn the waist around, and swing down the skirt armor. Fold down the roof of the cab behind the smokestacks and plug it into place. Swing the arms out to the sides and plug them into the shoulders. Adjust the pauldrons and the plates on the back of the forearms. Pull out the head. Close the chest. Adjust Prime's bra. 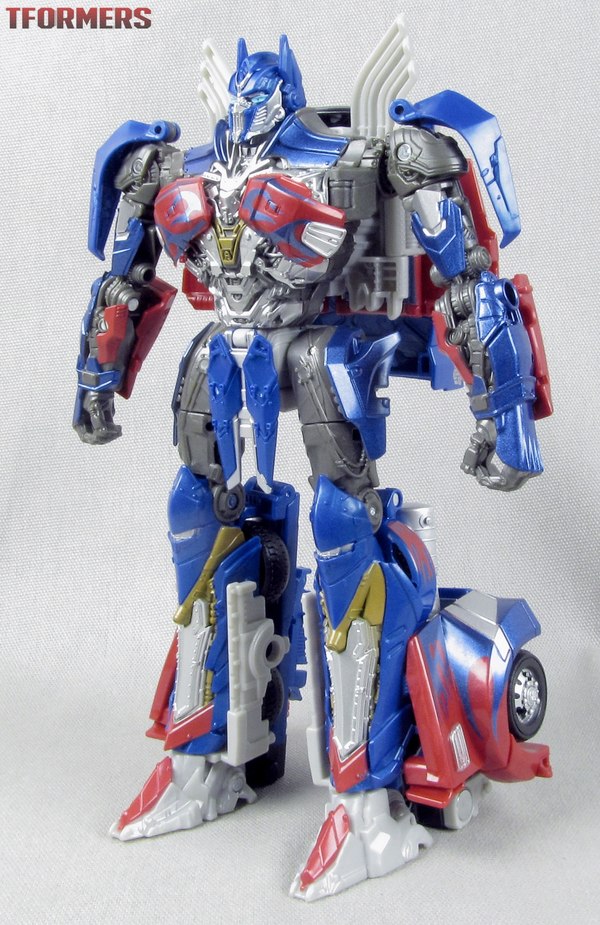 This is a really nice sculpt, I'll give it that. There's a lot of detail, and it all looks good. And here's the weird thing: This figure uses all the same plastic colors in the same basic layout as the retail release. But the increased paint applications and introduction of golden yellow paint to the design just leave it more balanced. 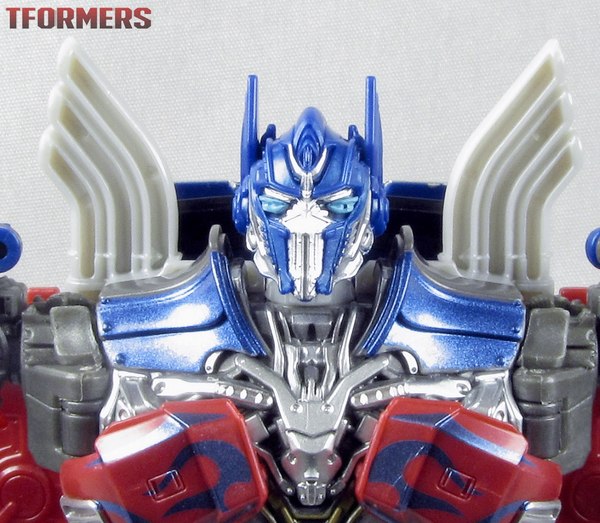 The gunmetal plastic and the lighter silver plastic and paint read like a paint mismatch on the retail Voyager even though they weren't. This is more pleasing to the eye somehow, and I think it's just a bunch of little things. 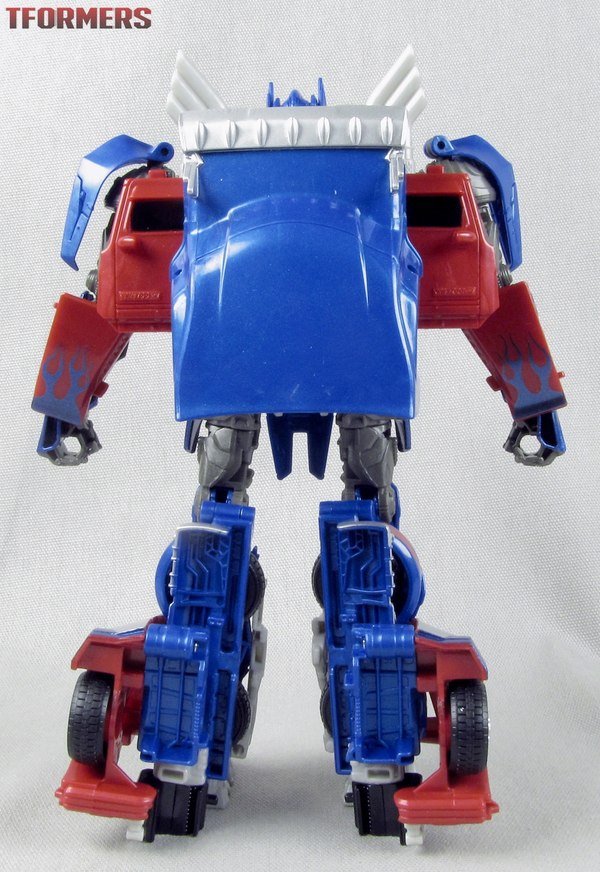 The aesthetic downside to the mold is... well, it's more accurate to call it a backside. As with so many other movie toys, the entire alternate mode is stowed on the back. It divides the parts better than some, and some of the parts integrate very well, like the plates on the forearms. But then there's the backpack and the cab. It's not particularly flattering, but I think it's done about as well as is physically possible.

Prime's mighty robotic trapezius prevents his head from turning very much. There's a minor amount of tilt. The arms raise straight out to the sides, and the pauldrons get out of their way very smoothly. It swivels too, but you'll have to get around the red flaps of the backpack and you may pull the shoulder loose doing that. There's an upper-arm swivel and an elbow with 90 degrees range. No wrists - always bugs me on a swordsman. He has a waist! It works well unless you've got his sword in its storage slot. The hips have great forward and lateral range because of his Masters of the Univers proportions. The thigh swivel is weird. The sculpt makes it really clear what the correct position is to begin with, and it's offset. So unless you're bending the legs there's basically one way to pose them that doesn't look really bad. And with all that truck on the back of the calf, the knee doesn't bend very far, and there are no ankles. (The left foot connection likes to pop loose a lot on mine, in fact.) You can still get some decent heroic poses and such, but the legs could've taken more advantage of the great hips, I feel. 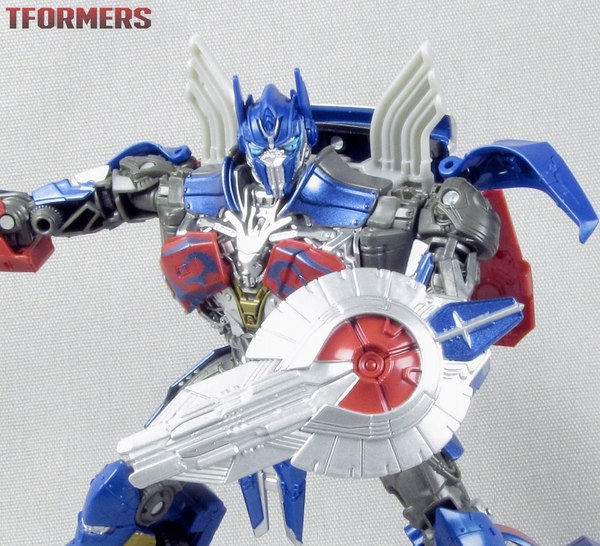 Prime comes with two accessories. The shield attaches to the arm just fine and looks good. It's a nice detailed sculpt, and the paint makes it look like there's a tiny coffin on the back end. Would not put it past Movie Prime to shield himself with human corpses. The shield stores largely discretely on the bed of the truck.

The sword seems a bit short, but it is... and it isn't. It's about as long as his arm, which is a decent sword length. But compared to the sword Optimus uses in the film, it is pretty short. Most promotional images show it being closer to the length of his leg. Like the shield it's nicely detailed, and stores in both modes. In robot mode, there's a slot beneath the backpack for storing the sword over his shoulder. If not for the smokestacks he could even almost draw it! In truck mode, there's a brace to slip it into. It works very well and holds the sword perfectly still with no problems.

So, here's the thing. This figure is really not bad at all. Everything works the way it's supposed to, it's decently designed and looks good. But, it was already overpriced at thirty dollars in the standard Premier Edition release. This release adds a bit better paint, no new accessories, a fancy box you will probably damage in the process of opening, and the chance - but no guarantee - for a piece of used tire. All for twenty dollars more than retail. I can't recommend that with a clear conscience. Especially stacking this up against the Revolution boxset, which is a pretty decent deal at a hundred bucks, or the Primitive Skateboarding Optimus Prime, which is an incredible deal at fifty. The only thing Voyager Prime has over those? At the time of this review, it's still available on Hasbro Toy Shop. Gee, I wonder why. 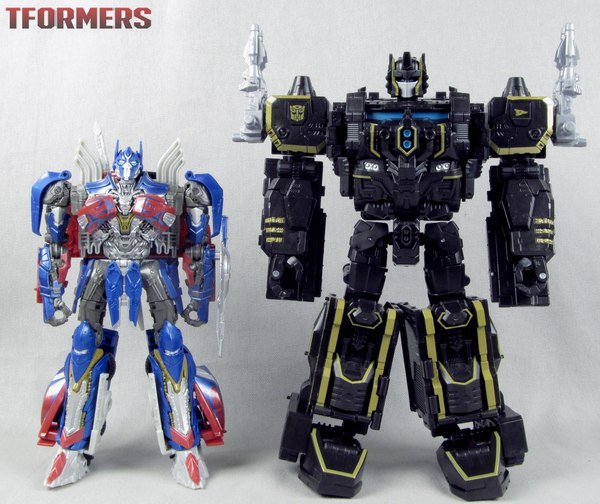