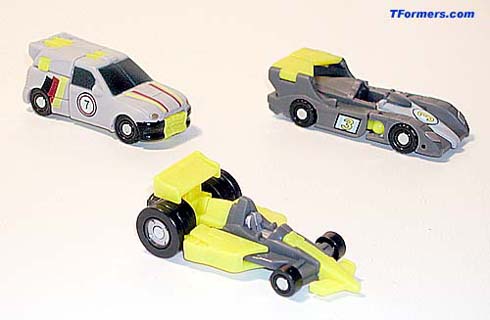 Race cars, just like tanks, fighter jets, and semi trucks, seem destined to be a stable of TFs. I dunno, personally, I'd like a Mini-Con Barnyard Action Team consisting of farm vehicles.

Vehicle Mode: Dirt Boss is a rally-type SUV, kind of like a little brother to Super X-Brawn. Measuring 5.5 cm(2.2") long, he's mainly silver and neon yellow with yellow, brown, and black racing stripes, gold headlights, metallic blue-green windows, and the number 7 painted in black, white, and brown on either door. Dirt Boss' faction symbol is located behind his left window and his Powerlinx socket is mounted on his underside. Other neat features included moulded door handles and rear-view mirrors.

Transformation: The front section extends to become the legs, arms unfold from the sides, and head flips up from the vehicle's underside. Long fingernails may be required for flipping out Dirt Boss' skinny feet. 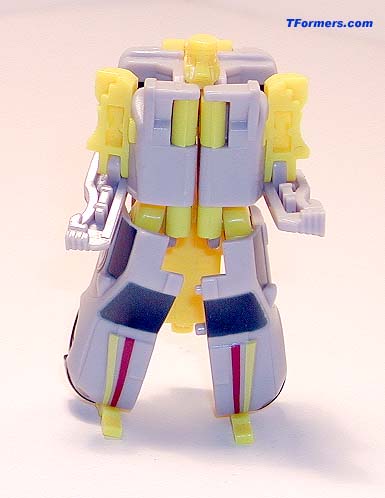 Robot Mode: In robot mode, Dirt Boss stands about 7 cm(2.75") tall. He's articulated at the shoulders, elbows, hips, knees, and ankles, but he's not as poseable as I'd like him to be. His legs are really too bulky to be put in active poses and his arms can only angle out to the sides with the elbows straightened or bent, as if he were putting up his dukes. His rounded head lacks any painted detail due to the fact that it doubles as the handle for Skyboom mode.

Overall: Dirt Boss is a nice SUV with a somewhat weak robot form. 6.5/10

Vehicle Mode: This time around, Downshift is a formula race car that measures 6.5 cm(2.6") long. Main colours are dark gray, silver, and neon yellow, with metallic silver headlights and the number 3 painted on the hood and sides in yellow, blue, white, and black. Downshift's faction symbol is located on his left side and his Powerlinx socket is on his underside. 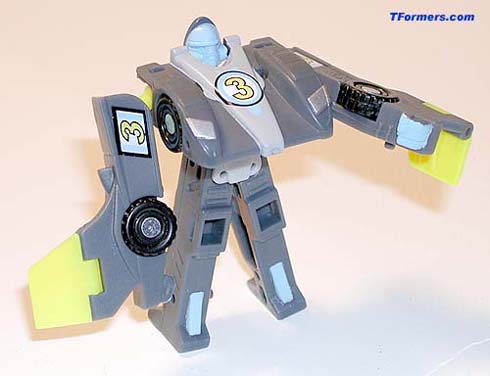 Robot Mode: Standing 6 cm(2.4") tall, Downshift is slightly reminiscent of a G1 Autobot from 1984 in that his upper body consists of the vehicle hood, so that he can't see anything directly beneath him. And with massive arms as long as his legs, he looks he's like the brawler of the Race Team trio. His shins, fists, and face are all painted with sky blue. His face actually looks something like a cross between BW Rattrap and a Storm Trooper. He has double ball-jointed shoulders and hips that do the splits.

Overall: Downshift is my favourite of the team. Good car mode and an ungainly but tough-looking robot mode. 7.5/10

Vehicle Mode: Although at first glance Mirage looks to be a neon yellow, dark gray, black, and silver recolour of Swindle, this 7 cm(2.75") long dragster actually has quite a bit of remoulding work on him. The noise section is smaller, the sides are have slight grooves in them, the driver's seat is taller and pointed, the rear set of wheels are wider, and the spoiler is rectangular shaped. His Powerlinx socket is still mounted in underside, but due to all his remoulding, Mirage is incompatible with both of Starscream's action features, sadly. His faction symbol is now on his left side, BTW.

Transformation: The same as Swindle's except for an added waist joint that ends up giving Mirage larger feet. 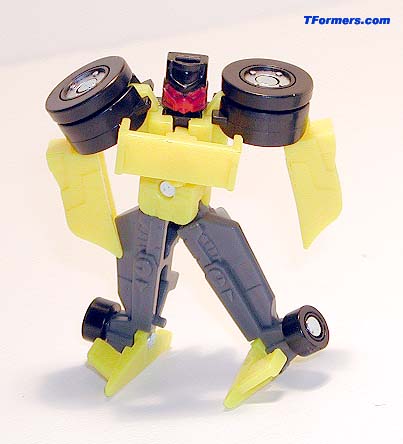 Robot Mode: Mirage stands just over 5.5 cm(2.2") tall. His black and red head is slightly larger than Swindle's and the face is completely different. Aside from the aforementioned waist joint, he's just as poseable, or unposeable, as Swindle. His arms swing out to the sides and his legs do the splits. And to top it off, the legs on mine keeping popping off.

Overall: Despite all his neat remoulding work, Mirage ends up being the loser of the lot. 6/10 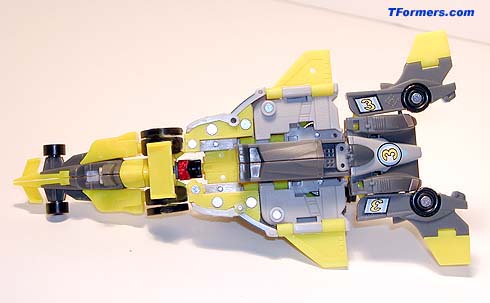 From vehicle modes, split Dirt Boss open down the centre, unfold the yellow wings, and swing out the handle, fold Downshift into a Y-shape and snap him onto Dirt Boss, then attach Swindle via the slot in his head. The result is Skyboom, a 16 cm(6.3") long, 8 cm(3.14") wide object that functions either as a very ugly jet or a rather nifty shield that fits snugly into the fist of Optimus Prime, Megatron, Starscream, or Red Alert. Skyboom also holds together better than its counterpart, the Star Saber. 7.5/10

Susp Sez: The Race Team is probably the weakest Mini-Con team released thus far, though by no means a wasted purchase. The vehicle modes are alright, but the robot modes are somewhat lacking in play value, especially Dirt Boss and Mirage. The Skyboom mode is what really makes this set worth getting. 6.8/10