Soundwave has spent his life either struggling against overpowering voices all around him - especially those of Primes. Now that a full quarter of the twelve original Primes stand on Cybertron, Soundwave isn't happy - nor is he sure who he can trust. The Falling, Part 2: Another Mine is written by John Barber with artwork by Kei Zama and colors by Josh Burcham. 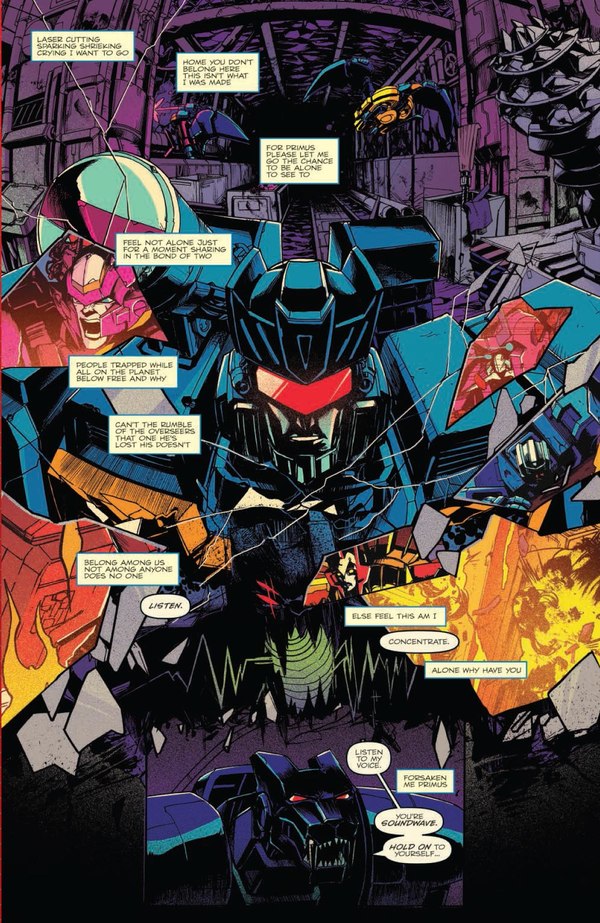 Until I re-read this page for inclusion as the sample here, I hadn't caught the fish-eye lens effect going on with the background. What a great page.

Soundwave is this issue's focus, detailing more of his history and showing his perspective on Onyx Prime's return. He's unsure about Optimus, who continues to make small and large compromises in the name of maintaining the peace, and is torn between fighting for that peace and the misgivings instilled in him by both his Decepticon history and his Decepticon friends. Soundwave's personal confusion and general unease with Primes drive the story, and there are places in the issue where events become somewhat unclear - but this is done intentionally. Soundwave himself is unclear about it, because of his unique sensory abilities. It first happens during a flashback on page one, so that we can be extra clear of what we're seeing at the key moment in the issue. It's very well set up and staged.

Kei Zama stages all of it perfectly to create maximum symmetry and disorientation. It's beautiful work, as always. I also want to take a minute to talk about her interpretation of Liege Maximo - who (just as others have said) it is taking all my mental effort not to call The Liege Maximo. His current design was created by Sara Pitre-Durocher for his appearance in the late, lamented, and celebrated Transformers: Till All Are One. There was a smoothness and attractiveness to him, a certain amount of the Marvel Cinematic Universe Loki. (I mean, he's always been green and had horns since his very first appearance, and he's currently known as the Prime of Lies. How could you not?) Kei Zama takes that design and those horns and truly takes a turn for the metal with it. Sara has said before that she thinks comparative discussions of artists that worry about who is "better" are counterproductive, and I agree. Speaking as someone who appreciates both artists, I think the very different design choices are fascinating, equally valid approaches to the character. Both artists knew exactly what they were doing and went in different directions, and both are really neat in very different ways.

But as always, Zama isn't the only artist delivering excellent work here. It's difficult sometimes to find good specific examples of how a colorist enhances a book, but sometimes the overall look is so apparent and so striking you don't really need to either. Josh Burcham and the vivid palette he's chosen for this series continue to be a major part of its visual success and character. Burcham has worked on so many books and brings something different to each of them; you'll be able to put a page of Requiem of the Wreckers next to a page of this and I'm sure they will look completely different.

Zama and Burcham's cover shows Soundwave and his animal friends, along with a series of overlapping pulses - soundwaves, of course - that give a sense of what Soundwave finds himself surrounded by at all times. Casey Coller and John-Paul Bove go with a stylized cover, second of a series, that puts pretty much the entire cast of the book inside Soundwave's silhouette. It's a great movie poster calibre design; can't wait to see the rest. Frequent Hasbro artist Marcelo Matere puts Onyx Prime menacing Optimus, who appears to be on his knees. I don't think I've seen Matere color himself often, and the results are great. I find it interesting that Onyx's colors look softer and more nuanced than Optimus'. A difference between his beast form and Optimus' maybe? Regardless, that's a neat contrast.

This issue is effectively the tipping point that will drive the rest of The Falling, and it looks like it's going to be interesting. A prelude to the chaos we know is coming later in the year. But there's one very interesting thing hinted at here that I hope we get a follow up on next time. Considering how much emphasis is put on deception in this issue, there's something that's implied on one page near the end that could explain a lot. I definitely want to see what's up next time.