IN A WORLD where Starscream hires Thundercracker to produce a totally factual, historically-accurate account of his life and experiences to bring the people of Earth to love him, only one thing will stand in their way: ...reality. "Thundercracker in: STARSCREAM: The Movie" Written by John Barber, art by Priscilla Tramontano and Andrew Griffith, with colors by John-Paul Bove and Josh Burcham. 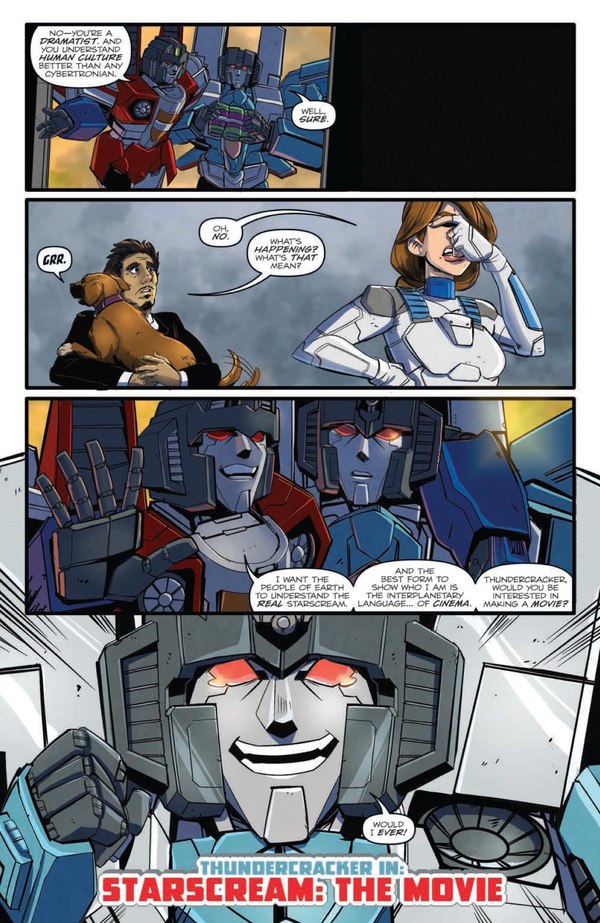 Thank you, Optimus Prime Annual 2018, for reminding me of the things I love about the current IDW continuity. The premise is so simple: Thundercracker finally makes a movie, and it's every bit the rich landscape you might expect, but probably in ways you wouldn't. Bouncing between points of reference throughout gives us a lot, from Starscream's own vision of what his story should be, to sequences of Thundercracker informally interviewing other characters that lend an almost documentary style to their presentation. Actors, costumes, film crew, we get the whole ...well, maybe not "depth" as such, but certainly a cross-section of Thundercracker's concept of the process of filmmaking. It is at most every step a glorious disaster and I was delighted my entire time reading it.

Actually, in terms of story depth, I was impressed. It's a double length issue, and there's a lot packed in this. If you're like me, you might feel by the time you get to about the halfway point like you've already had a satisfying story - and then there's an entire second half of a book to continue through. It's been a long while since I've really felt that, like there was that much density to a story. It's something I appreciate in a book with a cover price of $7.99. It probably sits well besides because while it lines up with what's been happening in the books released around the same time (though this spans quite a while in-universe) it is solidly a one-and-done story, so you don't feel very lost or left out of the loop if you haven't been keeping up diligently with every small happening or event book. Got a cursory understanding of what's been going on for the last year? You'll be fine. For instance, I have pointedly ignored the majority of event and crossover and whatever other gimmick of the week has come our way for the last little while, and I found this entirely accessible. It's a great read, and I don't feel like I can emphasize that enough.

This isn't going to be a review of great length, because all it's going to turn in to doing that is a bullet point list of scenes I enjoyed. There's not anything in particular I want to criticize. One sequence late in the book is maybe a bit weak in terms of plot motivation; you understand who, in an abstract sense, but maybe not entirely the why of the situation. On the other hand you get distracted there by what's actually going on so you don't even stop and think about it until afterward. I can live with it.

Art is split between two teams: Priscilla Tramontano on lines and John-Paul Bove on colors for most of the book, and Andrew Griffith for linework with Josh Burcham coloring the remainder. One standout aspect of the art, there's a lot of opportunity to play with different style in both the lines and coloring. Page 20 is a great example of this, when compared to pages both before and after, and there's more within that concept through the book. The mix in of Griffith and Burcham is also done well, making the switch between teams feel seamless, and wholly appropriate to the pieces they contributed. Occasionally some of the few humans who appear in the issue are a little on the cartoony side versus the art style I would more expect, but it's not something that bothered me a lot. And the expressiveness and body language used for them is really strong, so I'm calling it a net positive.

I'm not sure if I can go back to The Falling in the regular issues of Optimus Prime after this. I've very much enjoyed this issue more than I've enjoyed the last several of the regular series. I want more of this lighter, non-committal entertainment. It's speaking to me more strongly than the ongoing serial of ever-present universal doom we've been kind of circling around otherwise. Basically, if the regular offerings of the comics have worn a bit thin for you, give this a try. You'll probably enjoy it, even if it doesn't fix any other bigger-picture problems you might have.