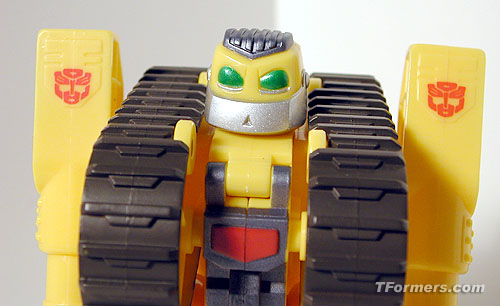 One of the very first new Playskool Go-Bots figures the public saw was Strongbot, the Yellow Bulldozer. He, along with Dinobot, were on display at the 2002 San Diego Comic Convention. Set for release in January of 2003, this merry looking construction vehicle is a full departure from the race cars, areoplane and beast forms we've seen in the initial toys released. Luckily, I was able to get a pre-view of the new Go-Bots and can review this one for us here. Oh and don't worry, I'll skip any rambling about these being for kids and adults liking them too. We know we all do. Enough said. On with the show.

Strongbot is a funky little yellow bulldozer. Hard to tell what, if any, real world bulldozer it was modeled after. This guy is a hearty little digger with a big scoop in the front and an enormous plow in the back. Strongbot is all about hydraulics. The vehicle body treads and cab sit dwarfed nestled between the front blades and the giant claw in the rear. While it may seem a bit off, these misproportioned parts gives Strongbot a speedy super-deformed look to him. He looks like a mighty mini-dozer that can really move.

Unfortunately, Strong can't move on his treads. Obviously molded into the body, the treads are nothing more than an effective cosmetic facsimile. The figure makes use of four, half inch plastic wheels that are mounted underneath for mobility. The dozer rolls well on a smooth table top or hard floor, but has little capacity for anything else.

Unlike the other Go-Bots, there's a cool new gimmick in this figure. If you press down somewhat on the top of the cab, somewhat firmly, the scoop lifts up about three inches with a spring loaded action. Its a pretty cool trick that should get those little tikes going in no time.

Just like all the Go-Bots, transforming Strongbot is easy as 1-2-3..er, uh...pie. Lift the rear plow blade to the 90 degree position. This doubles as Stong's feet. Now turn him over. Flip his head over that is tucked between the rear treads. Next, decouple the front blade and fold them out and away from each other. These are Strongbot's arms. Pulling each one forward reveals a ratchet type mechanism that makes a clicking sound as it moves. Keep turning till both arms at his side and there you are.

In Robot mode Strongbot doesn't look deformed at all. This is definitely the figure's best mode. Strongbot is just a bit shorter than his fellow Go-Bot Speedbot. The happy looking robot has a big wide sliver smile on a head that can move from side to side, albeit in a limited range. He has a universal Playskool Autobot symbol printed one on each of his shoulders.

Strongbot easily stands and stays upright. His chest extends forward above his two heafty legs and feet. Both of which have inter locking post that can couple them together or allow them to separate and move independently.

Since this line is designed for the very young, they offer little in the way of mobility. Strongbot is a good deal more posable when compared with Speedbot. Though it would have been a much better toy if the half scoops could spin around so they worked a little more like hands. The way they point off to the sides seems awkward.

The scooping gimmick described above works in robot mode too. Only this time it functions more like a punching action than a scooping one. Give Strong a little push down un his shoulders and he responds by swinging his left and right arms upward . Yeah, its a cheesy gimmick, but effective none the less.

I couldn't wait to get my paws on this guy. So getting a test-shot to review was too good to be true. Strongbot is my favorite of all the small Go-Bots figures in the series so far. The all new mold is really neat. The incorporation of the lifting/punching action is a nice addition too. All that and this being the only construction vehicle to date get this my high rating. No question this will be one of the more popular Go-Bots with kids and collectors.

Click on the PREV and NEXT links to see more images