Strong-Bot
The only non-Speed-Bot recolor/remold of the new vehicle assortment, Strong-Bot is a welcomed addition to the Autobot forces. I hope this means more construction vehicles are on the way. 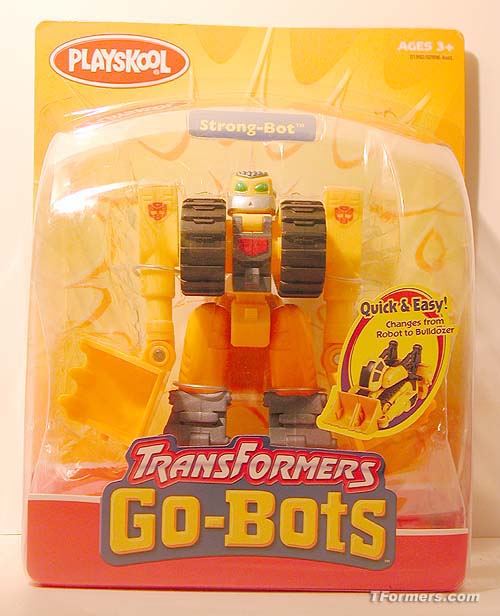 Tech Specs
“Strong-Bot is the Bot who lives to build and isn’t afraid to get his hands dirty doing it. He can be made into an Earth-shaking bulldozer that’s ready to prove that no project is too big and no dream is too small. Change him and he changes the world!”

I like the positive message, “No project too big and no dream too small.” Although I hope no one takes that last sentence literally.

Vehicle Mode
Mostly yellow and orange with black treads and some gray for the windows and the struts in the back, Strong-Bot is ready for the sandbox. There’s a nice feature that isn’t mentioned in the instructions. Pressing down on the driver’s station will cause the front shovel to lift. Another feature is that either side of the shovel is the perfect fit for the Dog-Bot that comes with Mirage-Bot. Since Mirage-Bot can’t hold both his friends, it’s nice to see the pooch doesn’t have to get left behind.

Transformation
Swing the legs up, separate the shovel and bring the arms down, and flip up the robot head. See? Isn’t that easy?

Robot Mode
Strong-Bot’s face resembles the robot from the Iron Giant movie. He features shoulder and hip articulation. He can also position his shovel hands in various ways thanks to the swivel at the wrist. And while it doesn’t look like it, you can separate the legs. Again undocumented, pressing down on the torso will cause the arms to swing forward slightly. This is neat for when he likely throws rocks or boulders at his enemies.

Overall
Strong-Bot is wonderful. He has a simple beauty about him, an easy transform and is just a lot of fun.