Buzzer-Bot
Perhaps this is what Waspinator meant by finally being happy at last. Buzzer-Bot bears a striking resemblance to everyone’s favorite glutton for punishment from Beast Wars. Are they one and the same or separated at birth? Only time will tell. 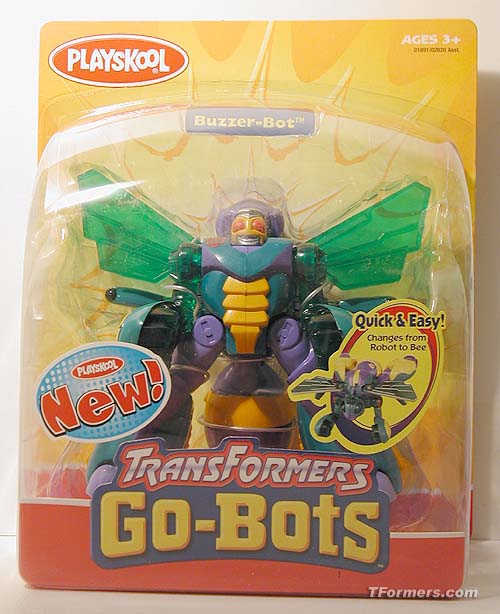 Tech Specs
“Buzzer-Bot is always buzzing about helping others, but not being able to fly really bugs him. So, with your help, he changes into a rocket-powered bee that is always ready to sting danger right where it hurts – ouch!”

Doesn’t sound like Waspinator, does it? I’m going with the separated at birth theory then. And it puzzles me as to why he wouldn’t be able to fly in robot mode. It was probably just an excuse to use the “bugs him” pun.

Beast Mode
He’s a giant bee, according to the tech specs and instructions. He looks more like a wasp to me with green. But I don’t know too many wasps or bees that have as much purple on them as Buzzer-bot does. His wings can swivel to the front as well as pivot slightly forward as well. What isn’t documented is the fact he bends at the knee to give him a more stable and higher-from-the-ground beast mode. Also, his stinger retracts on a spring when pushed in.

Transformation
Flip wings forward, straighten the legs, and open the feet. Move the tail up to reveal the robot head and position the arms to your liking.

Robot Mode
For a Go-Bot, Buzzer-Bot has a nice amount of articulation; shoulders, hips that move forward and back and outward, and knees. He shows off a little more green in this mode than in his bee form. Buzzer-bot also has got to be the happiest Transformer ever built. He has a wide, toothy grin. Even his eyes hint that his is a happy world.

Overall
Buzzer-Bot is a neat toy with a surprising amount of articulation and play value. And the fact that he could be Waspinator’s long-lost brother doesn’t hurt.