The name Sideswipe is synonymous with fast Autobot cars. The Armada bot carries on two of those three conditions. A sedan now, Sideswipe must do battle against the Decepticons in suburbia to protect those two-car garages and white picket fences. 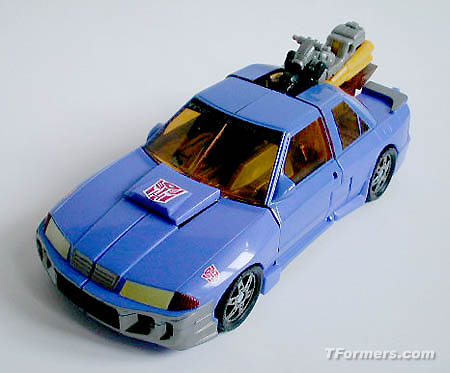 Set Includes
At six inches in length, Sideswipe is mostly blue. His windows are clear yellow and he has metallic red for his rear lights as well as the blinker lights in front. His headlights are a pastel yellow and there is some gray and black detailing his grill and bumper. He also features three Autobot insignias; on the hood near the windshield and two more on either front fender near the turn signal lights. Across the top of the windshield are the words, "Trans Formers" in a font I can't quite recognize. It looks nice though.

Sideswipe's gimmick in this mode is a clever one. Pressing a small button on his right rear bumper causes the mid-section of the rear of the car to flip over, revealing a place to store his Mini-Con, Nightbeat. You can even store Nightbeat with the hatch closed. And speaking of Nightbeat, he's a pretty spiffy looking little motorcycle. At 2 1/4" long, he's mostly gray with a yellow undercarriage and exhaust pipes, black wheels and front fender, and a red-painted headlight.

Start-Change-Finish
While the instruction says to press Nightbeat down on Sideswipe's hood where the Autobot symbol is, you really don't need to do so. With that being the first step, it springs the front fenders out and forwards to unlock the transformation. Swing the door paneling back and swing the rear sides of the car out, forward, then back. Bring the front of the car down and flip down the robot feet. Separate the front car halves, bring the front fenders back and lock into place. Fold the Autobot symbol down and slide the head forward.

To transform Nightbeat, swing his exhaust pipes down, rotate the front yellow part down, and keep the pipes facing downward. gently pull out the rear wheel and raise the headlight section up. Turn the main bike section ninety degrees to the left. Lower the neck back and head forward and you're done. 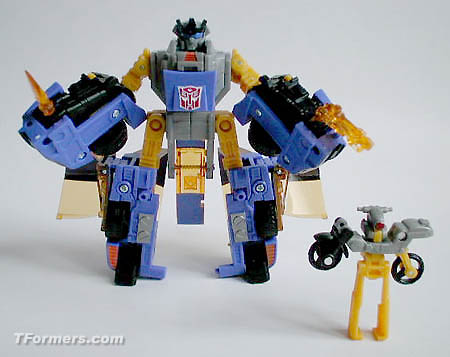 Transformation Completed
Sideswipe stands at 5 1/8" and is almost as wide with the car parts dangling off his legs. His feet and the insides of his forearms are black while his upper arms and legs are yellow. His torso is gray with some black, orange, and blue highlights. As for articulation, Sideswipe has limited shoulder movement, ball-socket elbows and full hip movement. He's actually quite a bit better looking than the online pictures tell.

And so he can protect the suburbanites, Sideswipe comes equipped with two weapons; a pistol and a knife. Both are made from clear yellow plastic and can fit into either hand. Additionally, the knife can attach to he underside of the gun to form a bayonet. These pieces are very small and can get lost very easily. Attaching a Mini-Con to the Powerlinx port on his back and moving it down will make his right arm do an uppercut. This executes much better than Super-Con Optimus Prime's punching action. He also has two static Powerlinx ports, one on the front of each leg.

Nightbeat stands at 2 1/4" tall. There is nothing new to report in the color scheme department. He features hip, waist, shoulder, and neck articulation. I think this is one of the cuter Mini-Cons out there, though the lack of proper arms will certainly be a downside to many.

Overall
I recommend Sideswipe and Nightbeat. Both look great in vehicle mode and Sideswipe features some of the neatest Mini-Con gimmicks to date and has a cool weapon design. Nightbeat may be a little disappointing to some, but I think he has a unique charm to him.

Thanks to Jack for providing the pictures.