Transformers are back and nothing indicates that better than non-toy products that we see coming out from third party licensing deals with Hasbro. One of the funnest new items are the Transformers G1 Playing cards have been released by The United States Playing Card Company under the Bicycle brand.

For about two dollars, I paid $1.70 for mine at Target, you get a fully Transformers G1 branded set of 54 playing cards in a very attractive box. Borrowing the the G1 series box theme with the red and black background complete with the familiar grid overlay, the front pack includes one of two lenticular animated covers for G1 Optimus Prime or Megaton. Tilting the card pack forward and back shows the character from the cartoon in robot and vehicle modes. There is no transformation in the animation, it more or less just switches back and forth between the two modes. 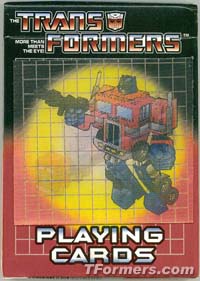 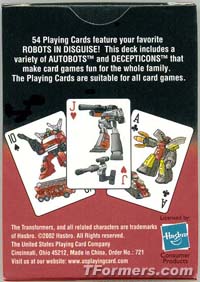 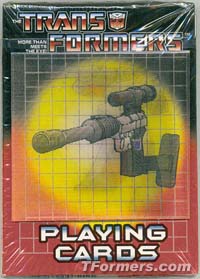 Open the package to find the 54 playing cards. The cards themselves are made of a high-quality plastic-coated cardboard. Each card back has a facsimile of the box front showing Optimus Prime in robot mode with his gun drawn. I was a little disappointed to learn that there are not 54 unique cards each showing a different Trasnformers character. Instead there are just 13 unique cards in the deck that are repeated across the 4 different suits plus the two joker cards.

The artwork is simple and accurate showing a line drawing of each figure in both modes. The drawings themselves are unrecognizable from a known artist. Sorry, I guess Dreamwave can't be involved with everything Transformers.

The card to character breakdown is as follows: 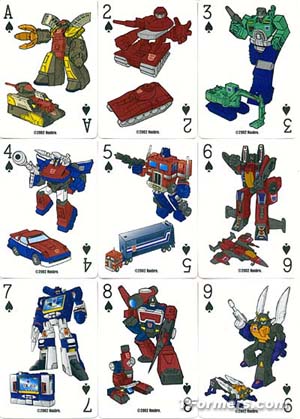 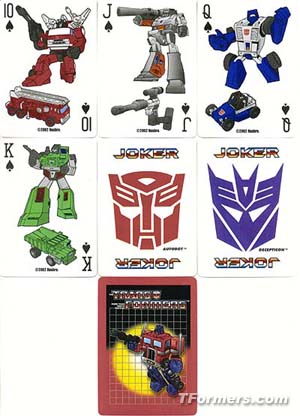 Its not clear what criteria was used to select the characters that would go on the cards, but its good to see a nice array of bots from small to large, Autobot and Decepticon.

These cards are really cool to look at and provide a new dimension to your favorite playing card games. Its great to see Transformers on playing cards and they make a swell collectible. The lenticular animated covers are a nice touch too. I would have liked to see more characters in the set. With just 54 cards and hundreds of characters to choose from, it could not have been that hard to add more variety and would have made the cards that much more collectible. For just under $2 these are a must have item. Break out a set for your next poker night. The gang will just love them.