Along with Silverstreak and "Autobot" Jazz, Rodimus Major serves as a strong argument for name reuse. Hasbro lost the Hot Rod trademark and as a result they couldn't even use the name for its original owner!

Packaging: As part of Commemorative Series I, Rodimus Major's box isn't all that impressive. It's small with an even smaller window that barely allows you to make out his vehicle mode inside. The art is lifted straight from the original G1 packaging, with Rodimus on the front and the 1986 battle scene on the back. Unfortunately, much of the scene is covered up with writing in not three, but six different languages (English, French, Dutch, German, Italian, and Spanish). He has no stats (there's literally no room for them) and his bio consists solely of his motto, "My actions speak louder than my words." and two lines: "RODIMUS MAJOR is a typical adolescent who dreams of being heroic and important. Although he means well, his impulsive actions often get him in trouble." 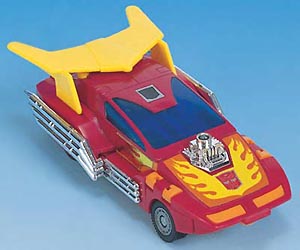 Car Mode: One of the first G1 TFs to not be based on an existing vehicle, Rodimus is a futuristic hot rod. He measures 13.5 cm(5.3") long including his spoiler and rolls very nicely on four rubber tires. He's mostly crimson with orange headlights, a yellow spoiler, translucent blue windows, and a chrome engine and exhaust pipes. Two passenger seats are visible beneath the windows. A hole in the engine allows you to attach one of Rodimus' photon lasers for battle. Flame decos on his hood and sides add to his "turbo-revving young punk" look. His rub symbol is located on the roof of his canopy. Another Autobot symbol is on his hood.

This is one of the all-time best alt modes, IMO. It looks awesome, it holds together fine, and it plays great. Vroom vroom!

Transformation: Complex for a G1 toy, but a cinch compared to the Autobot Brothers from RID. Legs slide down, arms unfold, hood and head swing out, spoiler rotates 180 degrees. 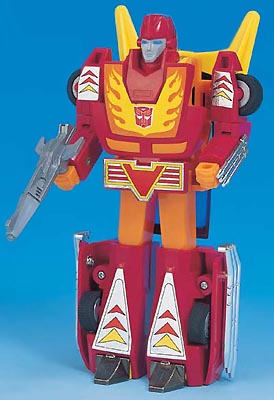 Robot Mode: Rodimus stands 14.5 cm(5.7") tall at the head, considerably taller than most of the 1984-85 Autobot cars. In this mode, he's got orange for his fists, thighs, and parts of his torso. His face is silver and his eyes are light blue. The sculpting around his neck resembles a shirt collar. His feet are die-cast metal instead of plastic, which is nice. He has joints at the wrists, elbows, and upper arms, which is reasonable for a G1 toy. His arms can also swing out to the side a little as a result of his transformation. For weapons, he has two photon cannons, one of them longer and thicker than the other. As well, the exhaust pipes on his forearms were shown to be laser weapons in the movie.

Rodimus comes with seven shiny stickers: two for his upper arms, one for his waist plate, two for his thighs, and two for his shins. Be very careful of the thigh stickers, as they will easily get shredded during transformation (I actually discarded mine).

Overall, Susp Sez: Hot Rod was one of my favourite TFs as a child and thus it's nice to own him again, albeit with a new name. The car mode is excellent, the transformation is effective, and the robot mode is easily recognizable as the main character from the movie. Only problem is, he's priced pretty steeply at $29.99 Canadian/$19.99 US. So unless you're a big G1 fan, you may find yourself feeling a little short-changed. 9/10

"My actions speak louder than my words." -Rodimus Major