After months of handwringing, the Dinobots have finally hit the shelves. I was a bit lukewarm about this set at first as I already own 3 of the molds - naturally the larger, more expensive molds. Finally I decided that 6 bots for $30 is a good deal. If you don't have any of these figures, I would highly recommend investing in a set. Most of the recolors are as good as the originals if not better. 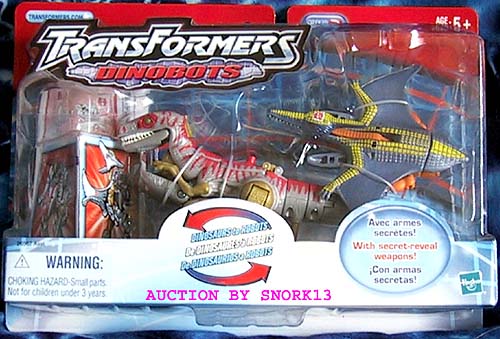 The 453rd repaint of Beast Wars Dinobot. There seems to be an attempt to make the figure resemble G1 Grimlock, with a gray, red and brownish-gold color scheme. I am not a huge fan of this design, and don’t believe it warrants the sheer number of repaints it has received. That said, I think this is a pretty good recolor, certainly better than the Dalmation colors of BW Grimlock.

The beast mode- a rather chubby, kibbly member of the velociraptor family- is a bit kibbly, and would look better if something could be done with the feet on his chest. Red markings up and down the back and head dominate the colors in this mode, with a silver-gray body and goldish trim. An Autobot symbol has been predominantly placed on the top of Grimlock’s head. The tail appears to be nipped off at the tip because safety concerns have shortened the sword inside. Fortunately it is possible to place the sword in the tail so that the tip does stick out properly. While it seems a trivial detail, it does look much better.

In bot mode there is a dramatic color change. The gold is now the primary color with gray trim and splashes of red (mostly on the back, chest and spinner). If you go by the character art, the “spinner” should be placed open on the back, which looks a bit better than it sounds. It does give Grimlock something like the characteristic “wings” of the G1 Dinobots, which is a nice touch. Of course it can also be removed as a weapon, and can be flipped down as an Inferno-esque blender-butt (probably not intentional). As I mentioned earlier the sword is about a half inch shorter than the original design, and also a softer, rubbery plastic. While it does detract a bit in beast mode, it doesn’t really make a difference here. The figure has good articulation, though the joints are a bit stiff and moving the arms often causes the body panels to shift out of place. A couple of pegs would have helped here. The only other drawback to the bot mode is the head. His robot face – red face plate with green eyes – is simply bland and partly obscured by the mutant head. This wouldn’t be such a problem if the mutant head was any better, but it isn’t. I know many collectors have removed the mutant head, but I can’t bring myself to do it.

Overall a solid bot mode with a so-so beast form. Will lose points for its familiarity to most transfans, but I think the color choices were good ones. The only edition of this figure that I already own is the Dinotron remold (which I think works better, particularly in beast mode), so I'm happy to add this figure to my selves.

I’ll give him an A- for bot mode, C+ for beast mode, and some bonus points for the G1-ish color scheme, so overall a B+.

Also called Terranotron on the packaging, but my guess is fans will stick with Swoop. Like Grimlock this is another recolor of an early, oft reissued, BW mold, Terrosaur in this case. Somehow, despite the numerous recolors this figure has received, this is my first time with the mold, so I don’t have much to compare it too.

Despite the G1 name, there has been no attempt to give Swoop a retro color scheme. In beast mode Swoop is a metallic blue with red eyes and yellow scales up and down the back, head, and arms. From below there is a lot of orange bot kibble (some is visible from above on the neck) and some purple trim on the bot limbs. Autobot symbols grace the head and the underside of each wing. Not much articulation – feet bend, mouth opens (teeth are painted white) and head can nod. This is an ok design, but very kibble heavy (like many early BW figures). The yellow scales don’t work for me, perhaps because about a third of the scales remain untouched, and I would have preferred something other than orange so that the kibble could better blend with the rest of the body.

In bot mode, the orange is more dominant and the purple highlights (helmet, hands, shins) more noticeable. Stands pretty well, and not very kibbly outside of the giant head on his back (I don’t count the wings as kibble). Ball joints everywhere makes him very posable. I love the fold up gun that tucks away behind the head – much better than the “body part” weapons of the early beast years. I still think the color scheme –blue, orange, yellow and purple – is too garish, but this is a very nice basic sized bot mode.

I would give this figure a C+ for beast mode, A for bot mode, and knock points off for the colors, giving him a final grade of B.