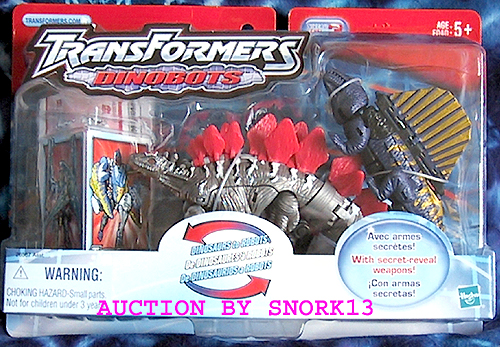 A recolor of Beast Wars Neo Saberback, Snarl is the figure that most resembles his G1 counterpart. Both figures are Stegosaurs, and RiD Snarl’s silver-gray, gold and red comes much closer to replicating the G1 Dinos than RiD Grimlock’s paler palette.

Beast mode is a very nice, fairly accurate design with minimal kibble (a peg on the tail and the feet on the rear legs). Not much practical articulation, though all the legs can move to some degree and there is some ability to position the back plates. Colors are mostly silver gray. There are some black and white stripes on the back giving Snarl urban camouflage. His back plates are bright red (sexual display?), and there is gold on the lower limbs and chest. An Autobot symbol is boldly placed between two red eyes.

Like other Neo bots, Snarl has a third mode that has not been documented on the US toys. Basically his butt opens to make a big flower. Gee, how could they not advertise that? This is supposed to be a (blindingly obvious) trap. Whatever. The flower- which becomes the gun in bot mode (huh?) is actually a nice contrast to the figure itself – metallic blue-green with white details, and a yellow core. Pretty nice effect.

As a bot Snarl is the best of the bunch. Tall, strong, well proportioned, with an Aztec warrior thing going on. He has some kibble, but it doesn’t get in the way – a couple of “saddlebags” and two “wings” that evoke the G1 designs. Color is still mostly gray, though the gold on the arms and legs stands out more, we get yellow and red on his headdress and loincloth and touches of black on his chest and limbs. There is a stego skull on his chest adding to the native warrior look. The tail-flower-gun looks better than it should. Makes a decent club in tail mode, and looks like a pretty kick ass weapon opened up. Only this missing is an Autobot symbol (the one on his spark crystal is covered by the skull). The package shows one on each side of his chest, but it didn’t make it onto the toy itself.

All in all this is a great figure, despite the frustrating transformation. An A for bot mode, A- for beast, and bonus points for going retro. Overall an A.

First time for this mold in the US, and thankfully Hasbro has abandoned the hideous color scheme of BW Neo Sling.

Sludge has almost nothing in common with his G1 namesake. He’s not even a dinosaur for goodness sake! However, Dimetrodon’s are my favorite protomammal, so I won’t complain.

Rather than go with the G1 red and gray of most of the RiD Dinobots, Sludge steps out with a bold new dinobot fashion – dark purple/blue with gold trim, and it looks pretty sharp. There is an Autobot symbol somewhat awkwardly positioned on the head. The sail is a bit thick, the teeth are not colored, and there is some underkibble (but since most of it is black it doesn’t call attention to itself the way Swoop’s orange body does). For articulation, the jaw can open slightly, and all 4 legs are on hip/shoulder ball joints, but none of it really lets you do anything dramatic.

Like Snarl and Triceradon, Sludge has a trap mode – his fin opens to reveal an orange and blue Venus flytrap type flower. It seems too bizarre, too garish to really work as it is intended.

In bot mode, Sludge fairs very well. The body is mostly black, which goes well with the purple and gold beast parts. Orange is added on the face (the head is reminiscent of Terrosaur) and the shield. Kibble-wise he makes out much better than most Neo molds. The forelegs fold nicely over the back and out of the way, and the head folds down on the chest. All the rest of the kibble is confined to the arms, but none of it gets in the way. The sail opens up into the shield and the tail becomes a thrusting weapon ala BW Megatron. None of this really hinders appearance or posability. The only drawbacks I find are the head, which doesn’t snap into place and tends to “look around”, and the shield’s tendency to snap shut at the slightest touch.

Overall this is my favorite of the three basic Dinobots, and second favorite of the subline (after Snarl). Since he was the only reason I purchased the two pack, I am glad to say that he was worth the $9.99 price tag. Beast mode gets a B+, Bot mode an A-, and overall and A-.