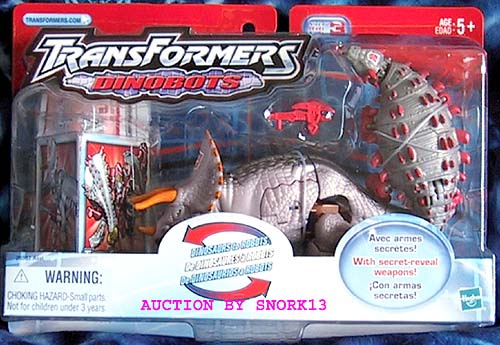 What, did they lose the rights to Slag? Ok, “Triceradon” it is, though I suspect that this will be the third figure in this mini-line which will have its official name vetoed by fans.

Triceradon is a triceratops (gee, what a surprise), long my favorite dinosaur (and as my students will attest, I’m a dinogeek to begin with), and that’s about the only thing that could make me buy this mold again (that, and being packaged with a figure I don’t own). He’s a recolor of BW Neo Guiledart, which was recolored and released once before in the US as BW Triceradon. In beast mode, Trike is mostly purple, a bit paler than BW Megs. The purple gradually blends in with a silver streak running down his back. The frill shield is purple as well, with yellow-orange fringe and an Autobot sybol dead in the center. (makes a nice target). Horns and toe claws are also orange, and the beak is silver. There are some hints of blue where robot parts creep through, but otherwise this is a pretty nice kibble-free design. While I preferred BW Triceradon’s color scheme, this is pretty good and works well with the rest of the team.

Like Snarl, Triceradon has an undocumented third form- rotting carcass mode. What do those Japanese designers smoke anyway? As bizarre as it sounds, this is a pretty neat –of sick and twisted- gimmick. Push the nose horn up and the eyes roll up and tongue sticks out (which as any Bugs Bunny aficionado will tell you means he’s dead). Flatten out his legs and pull open his sides to reveal ribs and bloody muscle. I wonder if he can release little buzzing insecticons to complete the illusion?

So far so good, but the bot mode is where the design really falls apart. The problem is there is so much kibble, and the design so squat, that everything collides together and all those ball joints are rendered moot. Hit bloody back ribs form a giant left shoulder pad, with two leg cannons and missile storage. This restricts the movement of the left arm, the and the weapons themselves cannot be brought forward. His huge head (Trikes had the largest heads of any land animal) forms his right arm, and again there is very little mobility. What movement remains is further restricted by side panels and a back pack. There isn’t even enough room for him to properly carry his tail gun. *sigh*. In the end, the bot mode can look good with some fiddling, but essentially has to remain a brick. This is a shame because there is some nice detailing here. As for colors, the purple is joined by a tan body, red brest and shoulder, and touches of bright blue at the joints. It sounds like an awful combination, but somehow it works.

I give Triceradon an A- for beast and carcass mode, and a C- for his bot mode. Average this out to a B-, C+ if you aren’t terribly fond of Ceratopsians.

What a crappy name. I think I’m going with Scrapper instead. Name aside, this was one of the figures I was most interested in, as it has never been released in the US. To be honest, I’m still not sure what to make of it.

In beast mode he’s an ankylosaur, always one of my fav dino designs, and a natural match for Snarl’s stego. Looks pretty good sitting on my desk, though I would have preferred them to use gray or silver for the legs than the red (which tends to look cheap IMO). Otherwise the silver/gray body, red spikes and gold club look very nice. One thing that I suspect will cause some controversy is the beast’s posture – he is stuck in a dynamic pose (think TM2 Cybershark), so while the legs are articulated, there’s not much point. Of course, this makes him no less a brick than most of the beasts. Given a choice between a static brick and a dynamic brick, I’m glad they went this way. There are wo features undocumented in this release. The mouth can open by moving a spine, though it will open wider if done manually. Also the club can be raised and triggered (again with a spine) to smash down. Unfortunately the “smash” is rather anemic, but its nice to see the effort made for a basic figure.

Transforming is pretty easy from beast to bot – just snap the bastard in half and unfold – but I found putting him back maddening.

Red becomes the dominant color of Slapper’s bot mode, with a gray chest, face, hands, and lower legs. Some gold trim adorns the shoulders and head. The head itself is a nice design, deliberately echoinghis beast mode. Rounding out the ensemble is an Autobot logo in his belly and, yep, kibble. Lots and lots of kibble. But the kibble isn’t as crippling as it could be. The figure actually reminds me of BW Megatron – his head forms his left hand, and a massive tail covers the right arm forming a weapon. So while there is kibble, it has a purpose. Unlike Megatron his tail weapon (there is a small gun barrel sticking out of the club) does not replace his hand – there is a normal arm and hand with complete articulation. The tail also hides a dual purpose gun/axe that can be held in his right hand. When stored, the pegs of the gun form two of the back spines, a creative solution. That just leaves his beast back which hangs off the left shoulder. While it is supposedto cover his back, it needs to be skewed down a bit to avoid getting caught with the tail kibble.

Not a bad figure, but one that will probably divide fans. If you can’t deal with the kibble, pre-posed beast mode, and frustrating transformation, he’ll likely end up in storage, on ebay, or in the trash. For others it’s a new design in the US, and while unlikely to be a favorite toy, it has some eccentric charm to it. I’ll give it a B for beast mode, B for bot mode.Take a few points off for kibble and other issues, but put them back for some nice gimmicks and detailing, and it all balances out to a B.