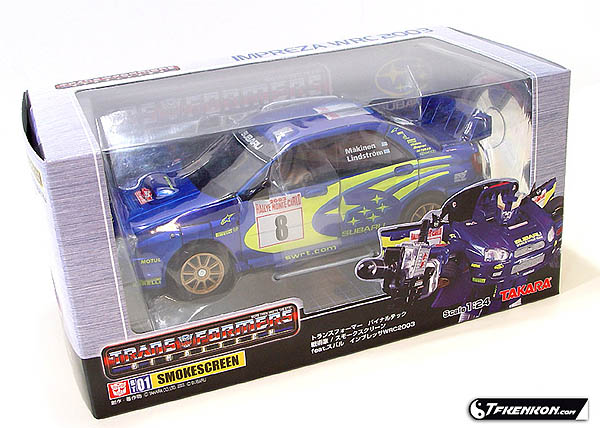 Where do I begin? When the first pictures of Smokescreen appeared in July, I was awe struck by the car mode and by the robot mode. Never had I seen such an incredible and very beautiful toy before, never. It was like a dream if you think about it. Ever since Armada had come out, the fans were up in arms and saying that Takara and Hasbro were killing Transformers. But I've gotten to like Armada and Energon is slowly appealing to me now, so maybe Takara and Hasbro are actually doing something good, we're all just too stuck to what we like to see that. 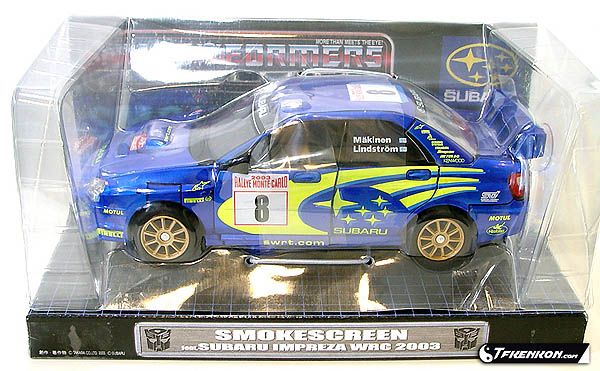 I love G1, I'm not all that fond on Beast Wars, I like RID and I've grown to like Armada, so I could very well grow to like Energon as well. Anyway, I'm going off track. Information on this beautiful new toy was hard to come by at first until it was released that the new toy was a part of a new range called Alternators, I'm sure we all know the rest so there's no point in me saying, is there?

What really got me surprised though was the name of this new TF, Smokescreen, and even more surprising was learning that instead of him being an all new Smokescreen like the Armada version, this Smokescreen was the true red, white and blue original from 1985, but in a brand new body with a new car mode.

Smokescreen was my first ever TF back when I was very young and to see him back in a new and amazing way, I was gob smacked. I never expected to see a remake of what I personally feel is an incredible TF, and now he's in the collection. So here goes, my views and opinions on the rebirth of Smokescreen, Alternator Smokescreen. Man, I'm sounding very melodramtic, aren't I? Can you blame me? Smokescreen is back and he is a beauty!

Car mode: TF's before the movie used to be based on real life cars, that is what us older fans know, and after the movie appeared, then the real life car modes disappeared to be replaced with more future style designs. RID showed some real life car molds many years later and now it's come back, in style.

Smokescreen is a Subaru Impreza WRC 2003 with all the trimmings, well almost all, just minus the wee ariel. His colours are a royal blue with green and yellow in many places to show that his paint style is that of a rally car instead of a street car. My version has the number 8 on the doors and roof, I've seen in picture that there is a number 7 on other molds. There's a lot of advertising names all over the car mode, just what you expect on a rally car and plus the names of the drivers of the number 8 car, Makinen and Lindstrom. It also says '2003. Rallye Monte-Carlo' on the front, sides and rear glass of the car. The number plate at the back of the car says 'S30 WRT', a cute thing to see. There is a lot of detail in this mode, more detail than you would ever expect to see in a TF. It's like seeing a model car, not a TF. 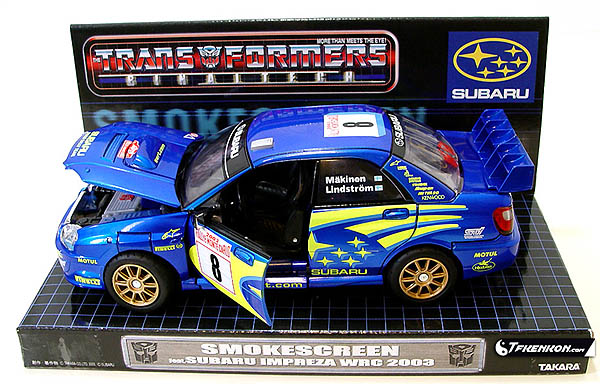 You can also open the doors, the boot and the hood. If you open the hood, you'll see the engine, kind of. If you can manage to see inside the car, you'll see the dash board details as well. Another cute feature is the front wheels. If you have one wheel facing to a direction, the other wheel reacts and faces that direction as well. It's done by a small steering system that's held together by very small magnets and it holds together really well. Also the tires are rubber, most of the toy is made from die-cast metal while the rest is strong plastic. The car mode is stunning, you have to see it with your eyes to really get the entire details. Words just aren't enough. Amazing.

Robot mode: Transforming Smokescreen is somewhat fiddly, you have to be gentle in some places while using a little force in other places. While the toy is mostly metal, there are plastic parts and those can be a worry as you're not sure if you'll end up breaking them or not, so it's best to keep an eye on what you're doing.

Once he's transformed, which is a very advanced form of his old G1 transformation, you get a ghost from the past. He looks almost 100% like he did in his G1 version, almost. The head is almost the same in every way and in a helmeted style, the chest is practically the same except for being a Scoobie, Subaru, and the legs and feet are almost the same as well. There are some differences like the section of the chest that connects to the clip underneath the hood and also his feet are made to stick out. If you also slip a finger in gently after bringing his feet down and then press down softly, his heels will flip down. 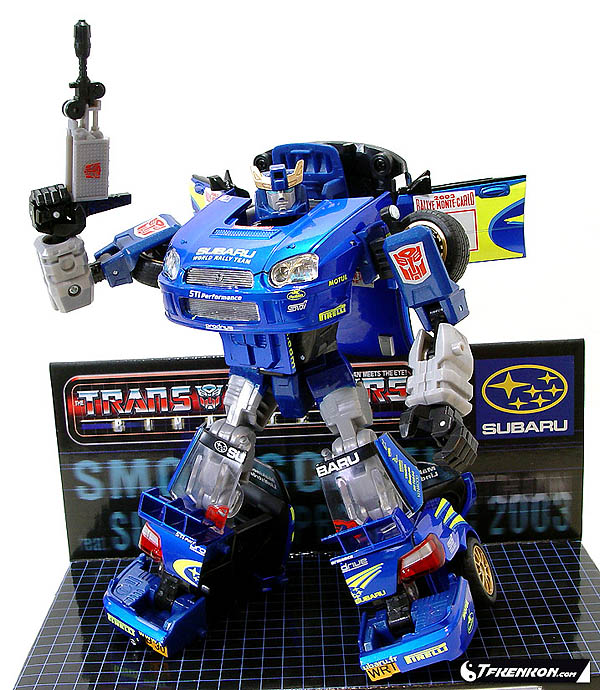 In this mode, the colours are mostly the same except for his grey legs and grey arms. His fingers aren't fully articulted, bit you can move one finger and the rest of his fingers easily, the fingers that are stuck together ball up into a fist, the thumb doesn't move. His engine becomes his gun and you can slot that into his hand, whichever hand is up to you, by a small sticky out bit that slots neatly into his palm, then you have the fingers hold the gun. It looks good and it's a great idea. He can even hold the Starsaber if you're gentle enough. He has about 22, maybe 24 points of articulation, that's a lot for a TF, you can have him in almost any pose if you're very good at making him stay upright. He is top heavy and can be hard to pose, so be prepared to spend a little time getting the pose you want right, then making him stay standing.

This is an awesome mode, it's like seeing G1 Smokescreen all over again, only updated big time for the 21st century. Takara have done wonders indeed.

Smokescreen should be coming out in the US soon enough, but not in the way Takara have done it. Instead of die-cast metal, Hasbro will be releasing their Smokescreen in mostly plastic, so he'll be a great deal cheaper. While the Takara one is expensive, it's well worth the money and looks good in any collection, it truly is like seeing a model car. If TF fans are still going on and on about how Takara and Hasbro seem to be trying to kill off TF's, then maybe they should have a good, hard look at the Alternators and also not be so fussy. 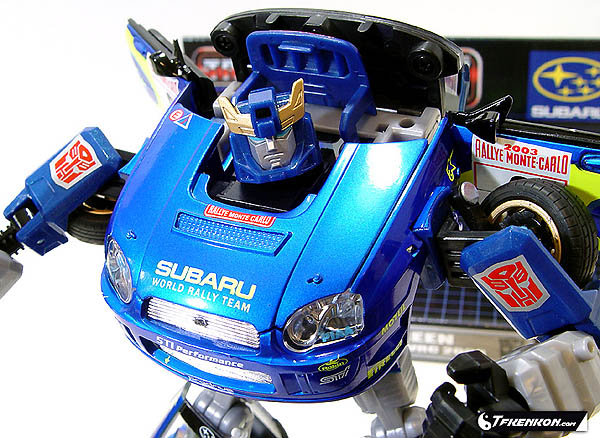 After all, TF's are supposed to just be for kids, right? Alternators is for the adult fans, kids might like it, but they have Armada and Energon. Why be angry at Takara and Hasbro for releasing toys for kids? If you don't like them, don't buy them, they still make a fortune either way. Transformers are changing, G1 will never be back, it's day is done, Alternators is the new, grown up G1 and I hope it's here to stay for a long, long time. Takara, Hasbro, thank you for an excellent toy line over the years, you've made yourselves proud with the Alternators. Here's to a hopefully glorious future of excellence, for both kids and adults who love TF's. 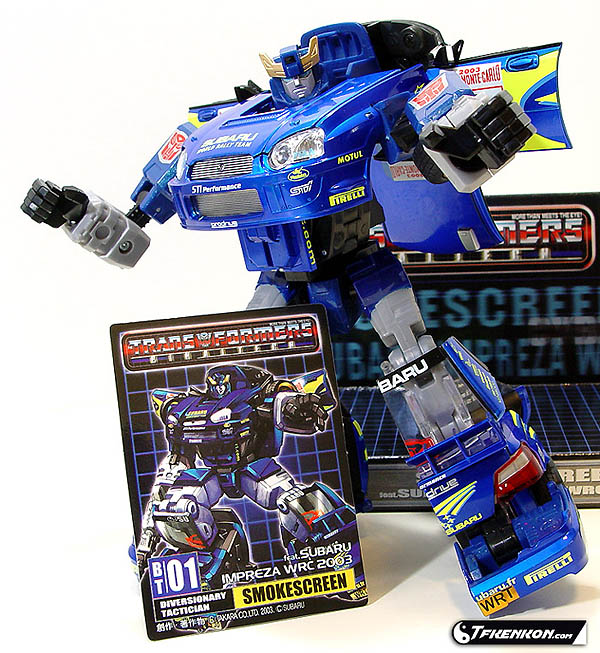