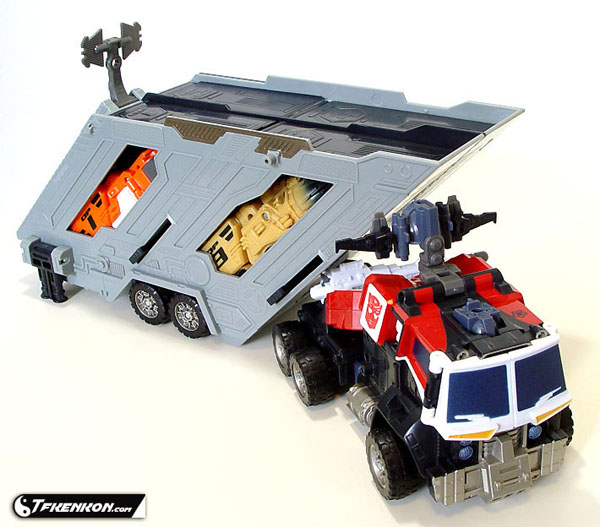 Energon Optimus Prime is quite different from those who have carried the name before. Elements of Prime's of old are present in this futuristic design: the basic red cab, though there is a lot of blue and white on it this time around, the gray trailer, as well as the basic design of the transformation of the cab to a certain extent. What remains a little unclear is the positioning of the super-robot helmet in vehicle mode. Prime comes packaged with it laying flat, atop the cab, while the pictures on the box show it pointing upward at all times, even in robot mode. I've found that it looks good in cab mode upside-down, resting on his arms. 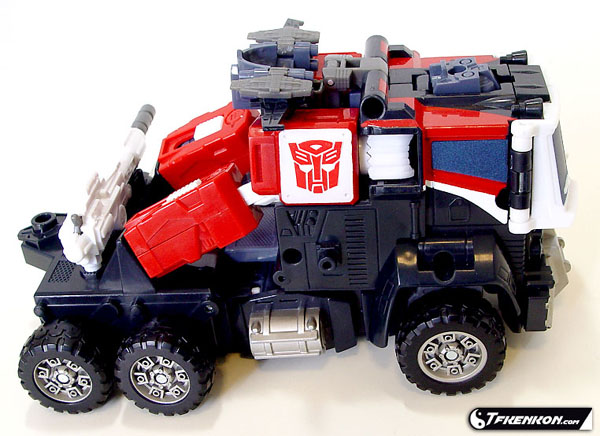 In addition to his trailer, missile, and a rather puny launcher to fire said missile, Optimus comes with four different Assault Vehicles (OP1: Fire Truck, OP2: Helicopter, OP3: Drill Tank, OP4: Submarine) each with it's own unique features... except the submarine. The fire truck's ladder can extend and has a rotating, dual-barreled, front water cannon. The helicopter features a rotating propeller and flip-out stabilizer. The drill tank's front drill spins rather quickly when rolling across the table. The submarine... well, it rolls. 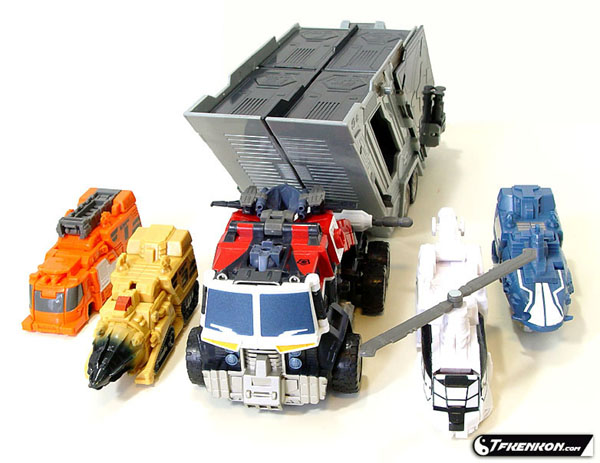 And while that may seem like a lot, Optimus also comes with a tech specs trading card. This card features artwork of the smaller robot on the front and his stats on the back, naturally, he has all tens. While it would have been nice to have even the faintest hint of a bio, this is a step in the right direction as far as I'm concerned. 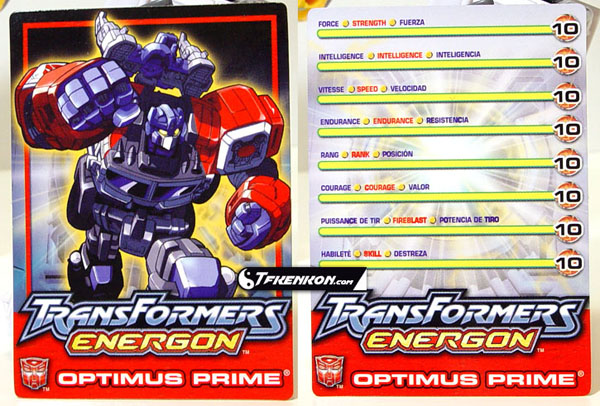 To transform the cab into robot mode, start by swinging the legs down and flipping the feet and stabilizers down. Bring the arms around from the back and slide the fists forward using the tabs on the arms. Swing the rear wheel assembly up at the first hinge and down at the second. Flip the robot head up and you're done. I usually have the flip-up helmet facing right-side up, resting on the platform on his back.

To transform the trailer into base mode, flip the trailer hitch down and set the trailer on the side the hitch stuck out from. Swing the rear struts and rear stabilizer down. Raise the radar dish and open up compartments one, three, and four from the front and compartment two from the side. The last step forms the helicopter landing platform. 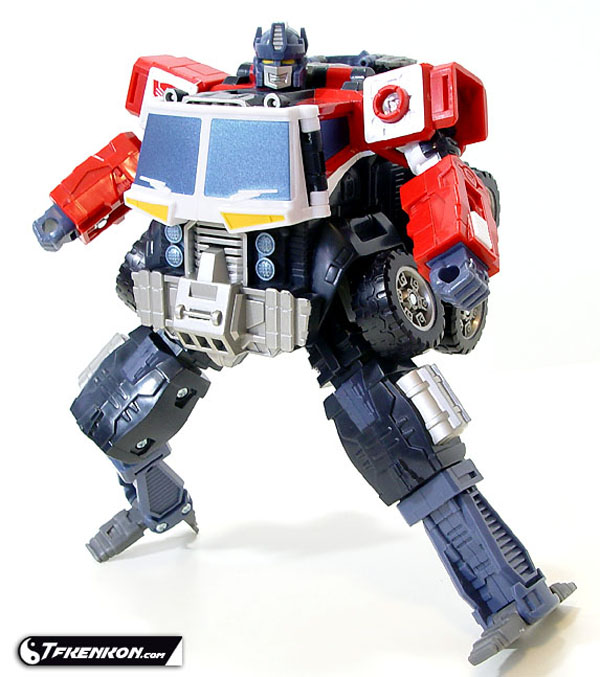 In robot mode, Optimus is rather chunky looking. He reminds me of Trailbreaker, only with articulation. Speaking of which, Prime has full hip and knee joints, though his design prevents him from being able to sit down fully, His shoulders rotate and can be positioned up as well. His elbows bend and his head can turn 360 degrees. Outside of the chunkiness, his robot mode looks all right, though the white on his chest and arms don't fit in too well with the rest of his colors. On his back is a switch with four positions and a button right above the switch. Depending on the switch's position, the button activated one of four different (and annoying) sound effects: truck horn blasting twice, three shots, a loud engine-like noise, and three radar beeps. Two AAA batteries are required to activate the sound and are not included. Also, Prime can store his launcher on his back. 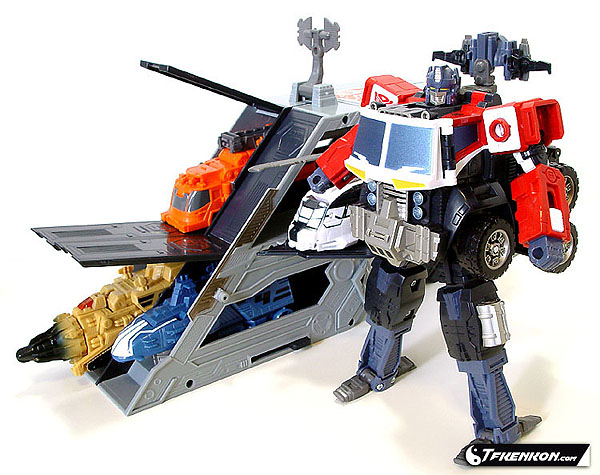 The base mode isn't all that inspiring, but it functions well. the first, third, and fourth bays all have levers on the outside that can help "launch" that vehicle forward. Bay two's helicopter platform is not quite wide enough, so the helicopter has to be right on the edge for the rotor to be able to spin properly. The radar unit pivots as well. I'm unsure what the struts are for, however. They could be cannons and if that's the case, the should be positioned upwards or outwards unless Decepticons sneaking up from behind are a problem. 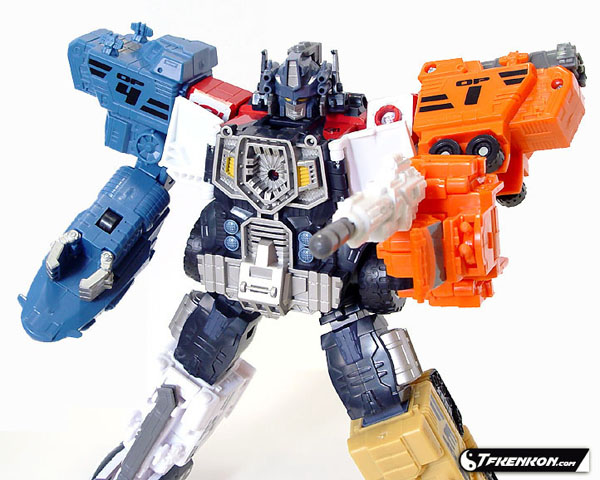 To transform Prime into his Powerlinx Super Mode, retract the fists (you don't have to, but I prefer to do so) and bring the arms up. Flip the feet and stabilizers on his legs up. Swing the helmet around and fit on top of the robot head. Rotate the outer antennae 180 degrees as you bring the side panels they're on down. Swing the front chest panels outward to reveal a Matrix-like chest design. When the left panel is pushed back, it hits a small button, just under the driver's side window. This activated another sound effect, an explosion and laser-blast, as well as flashes the red light in the center of the chest three times.

Now, you're ready to attach the Assault Vehicles in any one of 24 possible combinations. Each vehicle's transform is identical for the most part. To form arms, swing the rear section of the vehicle up. With OP1 and OP2, you'll have to flip open the front sides of the vehicle as well as the front so Prime will have hands. OP2's stabilizer must be in it's retracted position for both modes and the prop as well for the leg mode. OP3's cockpit can be positioned down, flush with the vehicle. OP4 has no additional steps required for arm mode. To transform the vehicles into legs, simply swing the front of the vehicle up. Use caution with OP3 as the instructions make no mention that the cockpit must be moved before the drill. Now, attach whatever limb to any socket, preferably the arms to the arm sockets and legs to the leg sockets to finish. 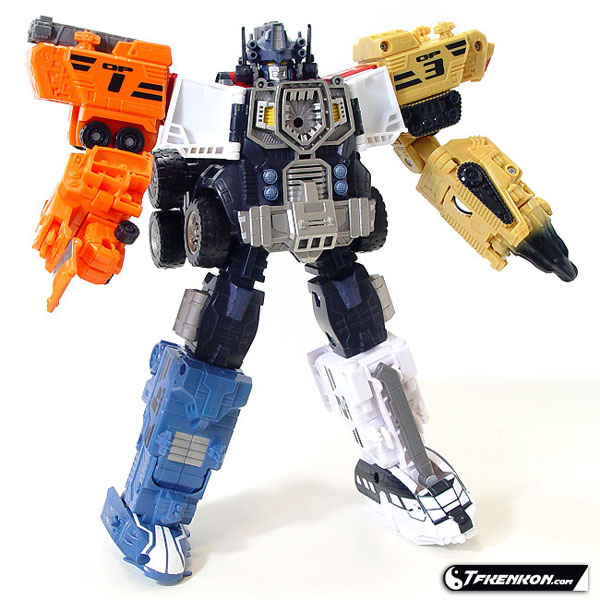 At a towering 9 1/2", Optimus Prime is quite a sight to behold. The red from his cab mode is almost complete obscured by the white chest panels and arm components. His face seems a little lost with the larger helmet now in place, but he seems to have some helmet-cannons to give him some added firepower. Prime has full shoulder, elbow, hip, and knee articulation and can move his head from side to side slightly. If OP1 is in place as an arm, Prime can also bend his wrist inward 90 degrees. As with the smaller robot mode, Prime can store his launcher on his back. While some may say Powerlinx Super Optimus Prime is reminiscent of a Power Ranger Zord, it does work fairly well for him. Shame that the smaller robot mode has to suffer due to the design.

While not the perfect Optimus Prime toy ever, Energon Optimus Prime is a step in the right direction following the rather lackluster Armada version. The combined mode and base are the better parts of this toy while the sound effects could have been left out in my opinion. That might have even lowered the cost, which, at $40 presently, would be a nice thing since he's not quite worth that much. Still, he's better than Armada Prime.