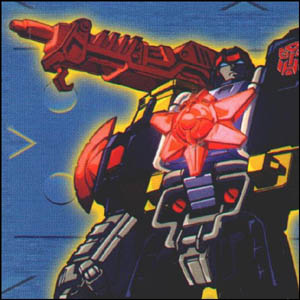 As one of the toys features in the Energon Volume 1 comic included with the first wave of Energon toys, Strongarm bears some resemblance to what Hound and Swindle's illegitimate child might look like. Being one of the Autobot's Energon handlers also gives him the distinction of having a number of multi-purpose accessories for himself and his teammates. 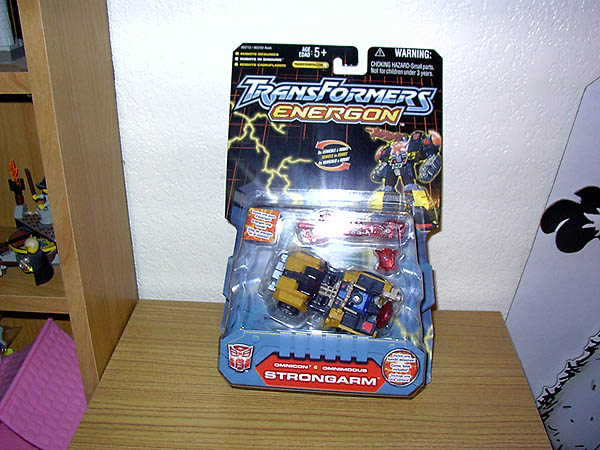 Packaged in vehicle mode, Strongarm, along with Skyblast and Battle Ravage, ushers in the return of the basic-sized Transformers toy. Measuring at 3 3/4" long, 2" tall at the roll bar, and 2 1/2" wide, this Omnicon resembles a hybrid jeep. Mustard yellow and navy-blue are the primary colors with some lighter blue highlights and headlights, gray front bumper, and a couple red dots behind the seats. An Autobot symbol is molded onto the rear driver's side fender and painted red. Unfortunately, the spaces in between the symbol's parts were also painted, making it looks like a red blob from a little distance. 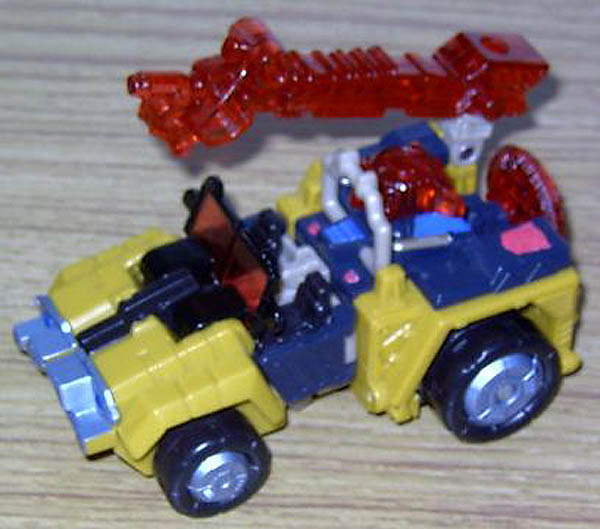 Also included are four red Energon pieces: a chip, cannon, and two blade halves. The chip can attach to the round peg behind the roll bar over the Autobot logo. This, according to the pack-in comic book, is where Strongarm expends Energon to create weapons. The cannon can attach to the peg on the right rear fender and is able to rotate and be positioned up or down. The blade halves fit together to form a spare tire that fits on the peg in the middle of the rear of the vehicle. It can also fir on either hole on the cannon. 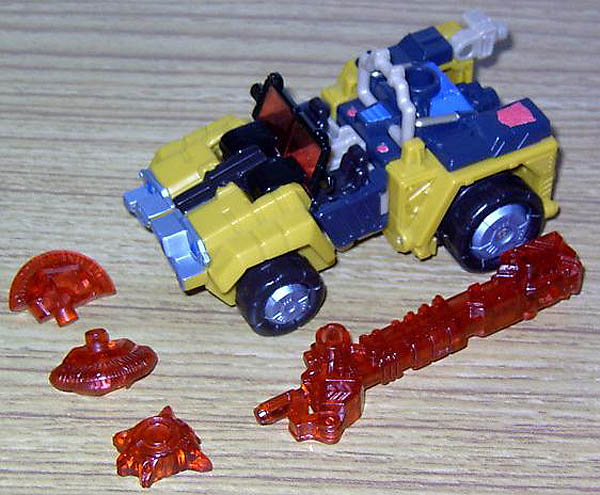 To transform into robot mode, swing the arms out from underneath and rotate the head around 180 degrees. Rotate the rear of the vehicle 180 degrees and fold the roll bar down. Swing the front section forward and flip the windshield segments up slightly or all the way, if that's to your liking. 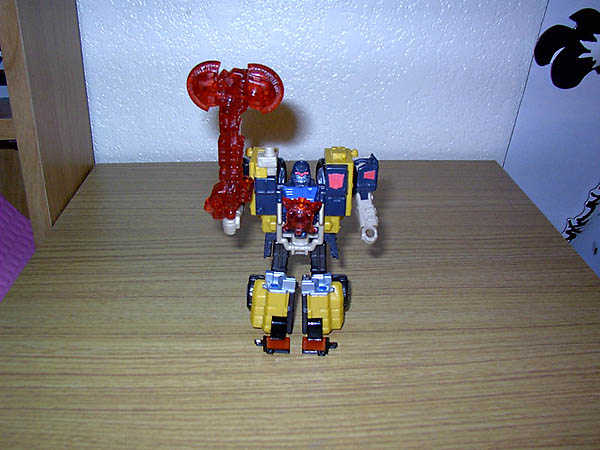 Standing at 4" tall, Strongarm is ready to deal Energon to his Autobot junkies. He has a wonderful amount of articulation: neck, waist, bending elbows and knees, and ball-socket shoulders and hips. Due to his design, his legs are limited in their ability to be posed. However, his shoulders gain range due to the rotation of the rear wheels to bring out the arms.

The Energon accessories can be implemented in a few ways in robot mode. The cannon can be held in either hand or mounted on his shoulder or on top of his head. The blades, in their combined mode, can be held in either hand for use as a small shield or placed on top of his head. Additionally, the blade halves can attach to cannon to form a gigantic, relatively speaking, hand-held axe. This is seen in the pack-in comic. The chip is only designed to fit on the same peg as in vehicle mode, however. 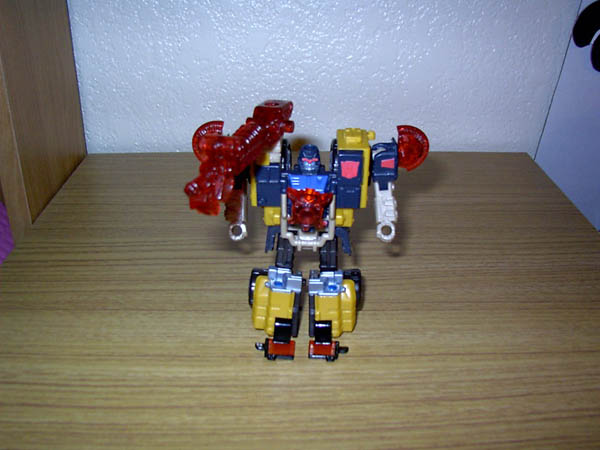 Strongarm is a good, solid toy that can stand on it's own, has good vehicle and robot modes, and enough accessories to vary play for a while. He's also not burdened by gimmicks and is a nice price, $6.99 at Toys R Us. It's good to see basic-sized Transformers again and Strongarm doesn't disappoint.