"FREEDOM IS THE RIGHT OF ALL SENTIENT BEINGS" - Optimus Prime-Leader of the Autobots.

First of all I would like to extend my thanks to Takara for making what is indeed a Master Piece! Of all Transformers I have ever seen, this is by far the BEST one ever made. Today I picked up my Master Piece Convoy made by Takara from Image Anime located in New York City and I would like to share with you my review of toy in full detail the best way I can. 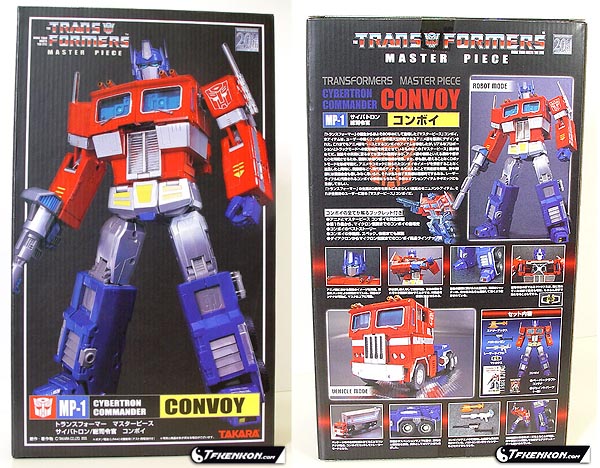 The box is if any of you have not seen it already posted on the web is in black with a white trim. On the front of the Box is the Master Piece Convoy standing like he is ready for Battle. Optimus Prime never looked so good. In the top right hand corner of the box is what appears to be Takara's logo to commerate the Transformers in their 20th year. It reads: Transformers 20th Anniversary Since 1984. On the sides of the box is the Transformers title and Master Piece colored in a shiny metallic silver like that of the #0 Reissue of Takara's Optimus Prime Binder.

Forget about reading the back of the box that is of course if you can read Japanese. On the back of the box is Prime featured in various poses as he is very articulate. Also shown on the back of the box is Prime in Vehicle Mode. The Box overall is OK But for it to be a such a huge Premier Toy, it would have been cool to put this baby in a Bookstyle Package featuring Dreamwave Art. I was thinking some thing of a picture drawn of Prime leaping into the air armed with his gun like in Transformers The Movie. The scene right after he transformerd and before he started blasting the Decepticons. 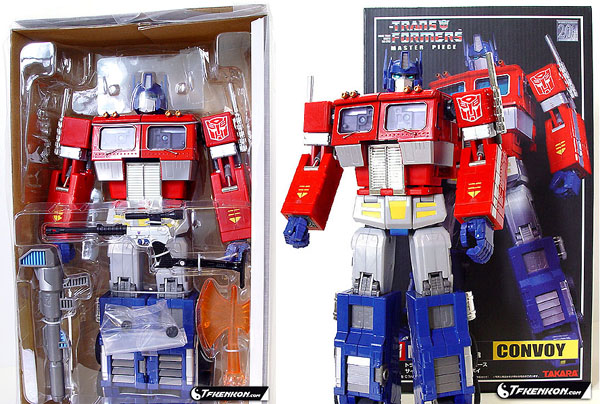 Upon opening the box I noticed that the slide open like tray that houses the Masterpiece is the Cardboard trailer that you are to put together yourself. I decided not to, I would prefer it came with a real one but with the way this baby looks, all disagreement of a trailer not being included went out the window.

The Instructions, of which all in Japanese, but it does have some pretty cool pics of Master Piece and all its features and Contents along side some pics of cartoon. For instance like the communicator on his right arm and there is a pic of him in the cartoon doing the same thing. In the back of the instruction book it has every Prime ever made and a Dreamwave Poster Pic of all the Primes.

The Masterpiece Prime includes his Laser Rifle which is colored grey by the way, Energy Axe, Megatron in gun Mode, The Autobot Matrix of Leadership, Tech Spec Card or Bio Card and of course, the main event himself, The Masterpiece Convoy and those damn twist ties. Arrrrrrrrghhhhhhh!!!!!!!!!!!!!!!!! 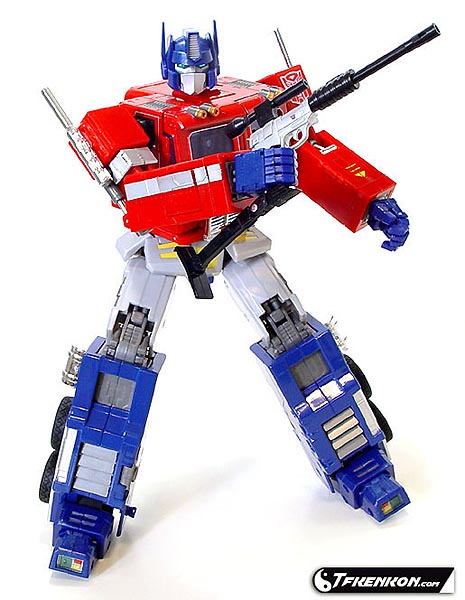 The robot mode is very hot, I wish I had upclose pics but you guys have Remy for that. If I had one word to describe the Master Piece Prime it would be none other than FLAWLESS. He is made from part diecast and part plastic. Prime has some weight to him now, in fact he is made from more metal than plastic, if a maniac owned him, he would probally use him for a weapon. There is no battle damage on Takara's Master Piece. I would say the Master Peice is made from about 65% diecast. He is very articulate, even his mouth moves!!! If any one of you own the Armada Unicron, Prime is just as articulate and then some. The joints on his arms and legs when you move him are all very detailed to the T!!! How cool is that.

His chest Opens up to reveal the Matrix which can be removed and opened up a bit just like in the Movie!! There is a button located on his left shoulder that lights the Matrix of Leadership!! He is very detailed, in fact I liken it to be like a version of Dreamwave Pat Lee's Optimus Prime.

As for the head of Prime as I indicated the mouth moves but there is one thing that concerns me and it may concern you too when you get yours. The Head of Prime is connected by this like ball and socket like joint that allows the head to turn all sorts of ways and look all around but it is like very small and thin. I am so scared that I might break it. Its a thin but hard peice of plastic. The way the guys in Image Anime were handling the floor Model I would say its quite durable but still, be careful with it. The Energy Axe, Megatron's gun mode and Prime Laser Rifle are all very detailed. Only thing is, Prime's laser rifle is grey. 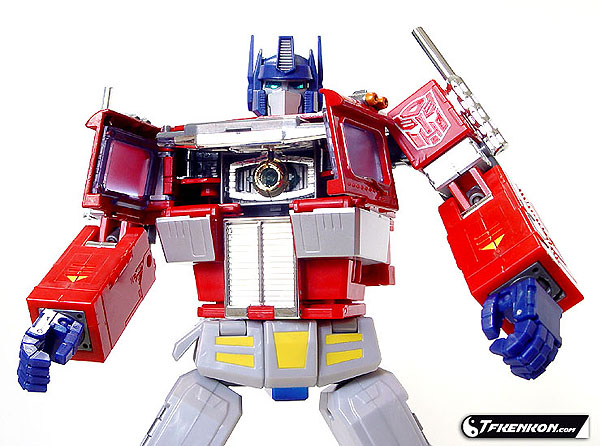 Transformation can be difficult your first one or two times around, I still have not gotten the hang of it just yet, Its going to take some time but its almost as similar to that of the Powermaster Prime but with a twist and whole hell of lot more parts to move. I found it a bit tricky on my first try, trying to move all the various parts. The hardest part I found hard to move was the Matrix Chamber when transforming to Truck Mode, it was really tricky. All the twisting and turning but once its transformed, the hard work so to speak doing it was worth it. Take your time and don't be hasty and break something. For over a $100, you will want to be real careful. 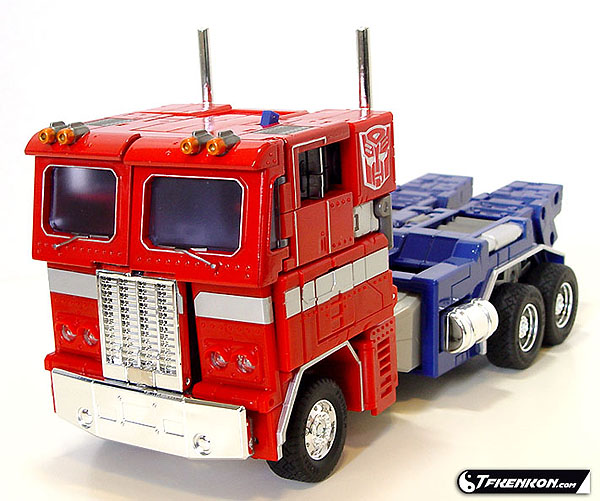 With spring loaded suspension and then some this baby rocks in truck mode. It looks like Takara did an exact copy of Pat Lee's Optimus Prime. He has windshield wipers and headlights. And talk about Transform and roll out, the wheels with the chrome... oh oh my God, the chrome ROCKS!!!!! I must say I can do with out the trailer just looking at him though I would prefer it, but thats a minor loss. And as for the tail lights on his feet, Awesome, like I said, I belive Takara copied this one from Pat Lee.

What better way to Celebrate the Transformers turning 20 years old. The Master Piece is a Master Piece INDEED. There is nothing you can add to or take away from this figure or what Takara had done. Good Job Takara. If you are planning on which one you should buy or not the guy over the counter told me that Hasbro's was going to be plastic and would include battle damage. I don't know if its a rumor or not but I have been die hard Takara since they started doing the reissues and not once, NOT ONCE have I ever been disappointed by what they have done with the G1 Reissues and I am sure you will not be either with Takara's Master Peice Prime. So if I had to choose it would be Takara's. Buy this thing because you like Prime, buy it to commertate the Transformers turning 20, or just buy it because THIS IS JUST ONE DAMN COOL AUTOBOT!! ........FINAL GRADE A+

Many thanks to Remy for the images! Check out more pics at the link below.