Returning for a repeat performance alongside Optimus and Hot Shot is the Autobot's number two 'bot, Jetfire. In Energon, Jetfire trades his more conventional space shuttle look from Armada for something a little more futuristic in appearance. His design looks like an amalgam of Scattershot and Sky Lynx, though he still forms a pair of pants as well as a shirt. 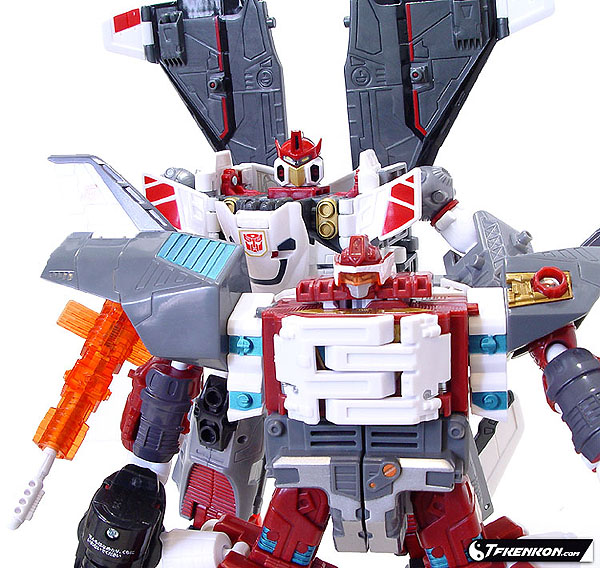 In his shuttle form, Jetfire is mostly maroon with large sections or white and gray. The front cockpit section is clear orange with the white and black details painted on, leaving the windows transparent. The tail fin has an Autobot logo on either side; a Powerlink symbol on the right side and a detailed regular version on the left. Additionally, an Energon Chip insignia is located on the left side of the upper section, just below the vent. 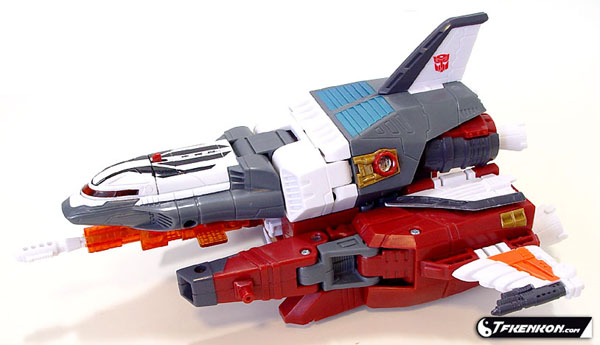 Jetfire can attach his missile launcher, which looks a little like the Mini-Con Astroscope, underneath his cockpit in two positions. The forward position enables the cannon to swivel. The rear position allows the launcher to fire with the press of the button right behind the cockpit. There's an additional button on the underside of launcher as well. Like Skyblast, Jetfire has grabber claws. When in the open position, pressing the button in between them causes them to close. 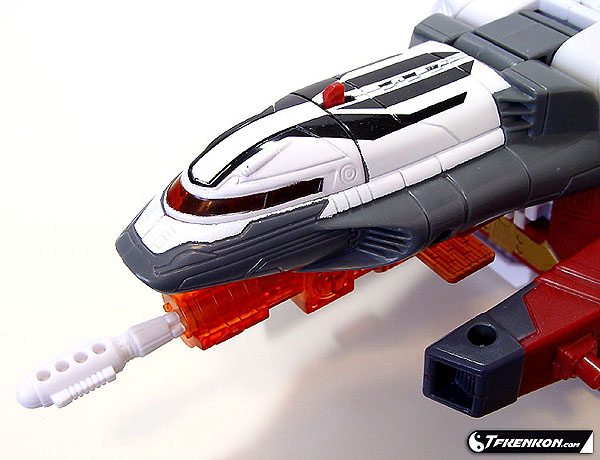 To transform into robot mode, start by removing the missile launcher. Flip the lower engines down as far as possible and swing the large maroon sections back. Flip the outer wings down and the wheel sections back. Rotate the sections so that the wings are facing down. Fold the feet back and then down, then fold the back panels up.

Separate the upper engine sections out and rotate 90 degrees at the front vents. Bring the sections forward and lock onto the sides of the torso. This may take some doing as they don't lock very well, at least not on my toy. Bring the engines down, open the side panels, flip the hands out and close the panels. Flip the nose cone back and the head down. If you have two AAA batteries installed, you'll hear a familiar transform sound effect when the head is pressed down all the way. Raise the visor up if needed and place the launcher in whichever hand you prefer. 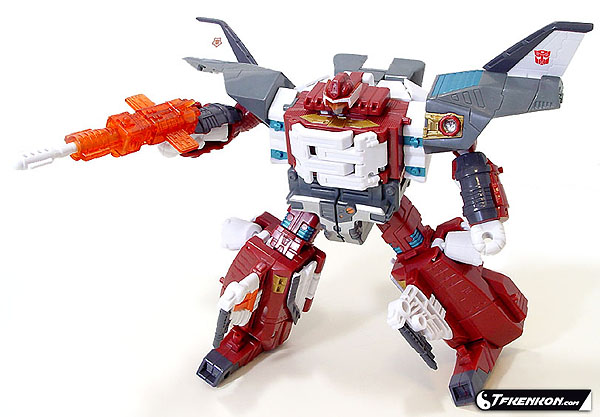 In robot mode, Jetfire stands at 7 1/4". he is still predominantly maroon with a fair amount of white and gray along with some blue highlights. His face is painted silver with a clear orange visor with white details covering his eyes. Jetfire features a good amount of articulation. His shoulders rotate and ratchet outwards. He has ball-socket elbows as well as full hip joints and bending knees. The grabber claws also work, better then in shuttle mode, though it's unknown as to if there is anything specific he is to be grabbing. 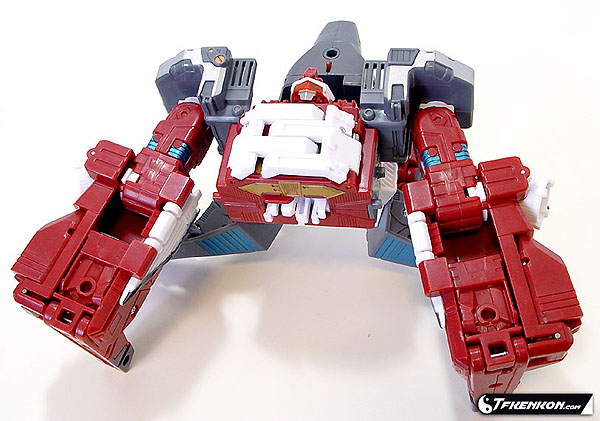 Utilizing the power of "the Spark of Combination," Jetfire can combine with other Powerlink Autobots to form larger robots. To form the upper torso from the robot mode, return the arms to their engine form and the robot head and cockpit sections to their original position. Swing the arms out from where they connect to the upper torso and rotate them upward, swinging the tail fin sections down as you go. Bring the legs out to their sides and separate at the waist then swing the entire upper shuttle section around 180 degrees. Rotate the legs 180 degrees and flip the hand panels up. Lower the arms and robot head and attach to any Powerlink Autobot in pants mode.

To form the lower torso from the robot mode, return the arms, robot head, and cockpit section to their original positions. Swing the arms out from where they connect to the upper torso and rotate them upward. Rotate the entire upper shuttle section around 180 degrees and fold the tail fin sections down. Extend the feet down and secure them with the wheels sections from the shuttle mode, then attach to any Powerlink Autobot in shirt mode. 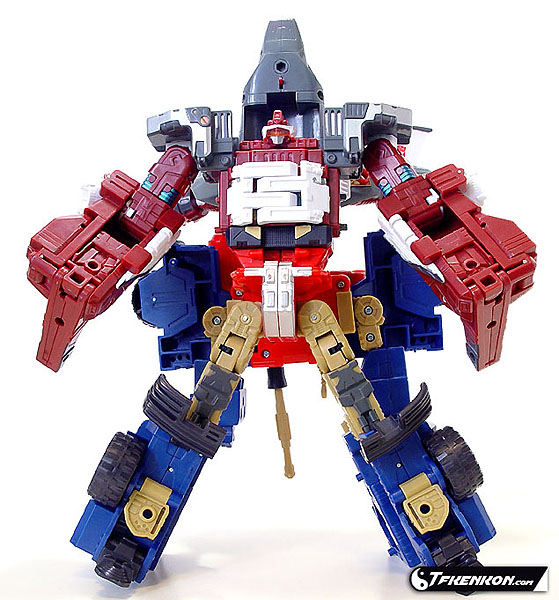 Jetfire is a nice addition to the Powerlink Autobot army. It's rather fun to combine them into the various robot modes. However, the smaller wings pop off rather easily, which isn't entirely bad since it means they won't break. It just got annoying after it happened about five times in a row. The shoulder and robot head connections are not very stable either and can pop loose if you look at them cross-eyed, at least they do on my version.

Many thanks to Remy for supplying the Jetfire pics. Check out lots more at the link below.