Ever wonder what would happen if Transformers and G.I.Joe were to merge? Well, Snow Cat gives you a glimpse of that world by taking the G.I.Joe vehicle of the same name and modifying it for his vehicle mode. Sadly, he's not to scale with the Joes. But, if he were, he'd likely be a lot bigger and more expensive. 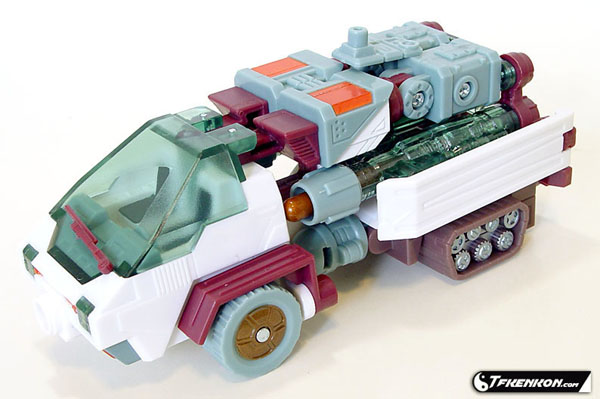 As mentioned above, Snow Cat is based off of the half-track vehicle from the G.I.Joe line. There are more colors, maroon and slate, and the missile launcher is now two units, tucked under the robot arms. And while the ski-torpedoes are gone, the windshield wiper is still present. There's a swiveling panel on top that has a Mini-Con peg. It seems like an afterthought for Mini-Con compatibility and pops off easily.

Snow Cat has a Hyper Powered version of his vehicle mode as well. Rotate the front purple fenders and the large, white side panels down to form skis. Rotate the missile launchers so they're on top and Snow Cat is ready to do battle on the slopes.

To transform into robot mode, return Snow Cat to his normal vehicle form. Swing the tracked sections down and rotate 180 degrees. Rotate the side panels so that they line up with the treads. Swing the Mini-Con panel around 180 degrees and lower the launcher mechanism. 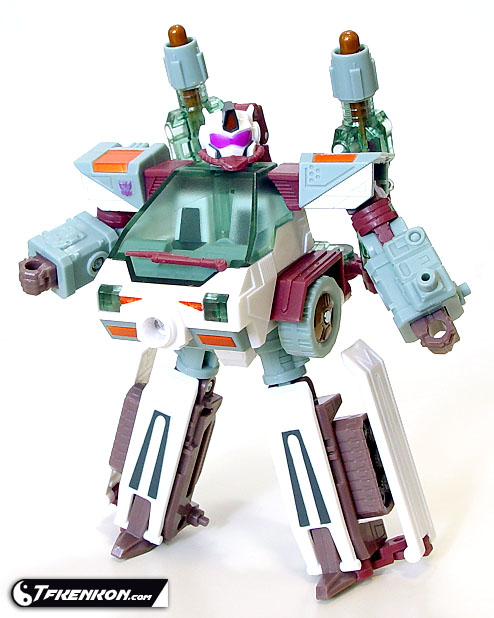 Separate the back section of the vehicle and bring the sides out to form the arms. Bring the arms down and extend the fists using the levers on the forearms. Bring the robot head up and lay the launchers flush against his back.

In robot mode, Snow Cat has 14 points of articulation: neck, waist, ball-socket hips, knees, shoulders that rotate and pivot outward, and Elbows that swivel and bend. His torso is slightly reminiscent of the G1 Ironhide and Ratchet animation models in that it's mostly a large windshield. The head is unique and rather cool looking: a white helmet with a dark blue vent cover (and gold vent) on top with a purple visor, more dark blue outlining his mouth plate, and a maroon gas mask.

As with vehicle mode, Snow Cat also has a Hyper Powered Robot mode. Rotate the side panels on the legs behind the legs and lay flat. Swing the front leg panels down. Rotate the launchers around 180 degrees and swing them up at joint where the clear plastic meets the maroon plastic to aim them forward. Snow Cat is now ready to blast the Autobots while doing a backside misty flip.

At first, I wasn't very impressed with Snow Cat. He's a little smaller than most of the deluxe-sized Energon Transformers and his color scheme looked rather plain at first. However, after opening him up and playing around with all the cool features, Snow Cat is easily the second-best deluxe, second only to Starscream, in the Energon line. The fact that he pays homage to one of my favorite G.I.Joe vehicles is icing on the cake.