From a police car, to an Indy car, to a lion, to an owl, and more, the name Prowl has been applied to more toys than most. And so, it should come to no one's surprise to find that the name is once again used in Energon. This time, the alt mode is a merger of his police and Indy car roots. Hopefully, he'll have more character than the last bot with the name Prowl. 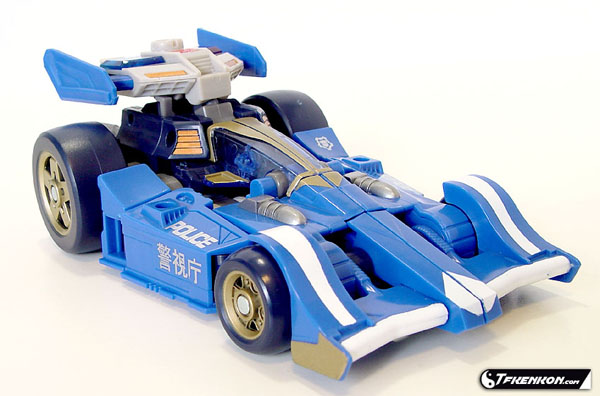 In vehicle mode, Prowl resembles a futuristic Indy-style car... with police markings and lights on the spoiler. Prowl is mostly blue with white highlights in front, silver police markings on either side and a plethora of gold paint throughout. There are two holes on either side, behind the police markings where the weapon can be placed for an attack mode. It would likely look better if Prowl came with two weapons.

The spoiler is light gray with blue sides, that are not extended in the package and the instructions make little not of this feature, a red and blue "light" and two Autobot symbols in the center. One is molded in and painted red. The other is the Powerlinx port for the Energon Chip.

To transform into robot mode, swing the sides and rear wheels out 90 degrees and fold the sides back down. Rotate the lower sections forward and flip the fists down. Position the windshield section up and forward and pull the front section out. Swing the front fenders up and flip the Powerlinx hand back. Slide the spoiler down and rotate the head up. 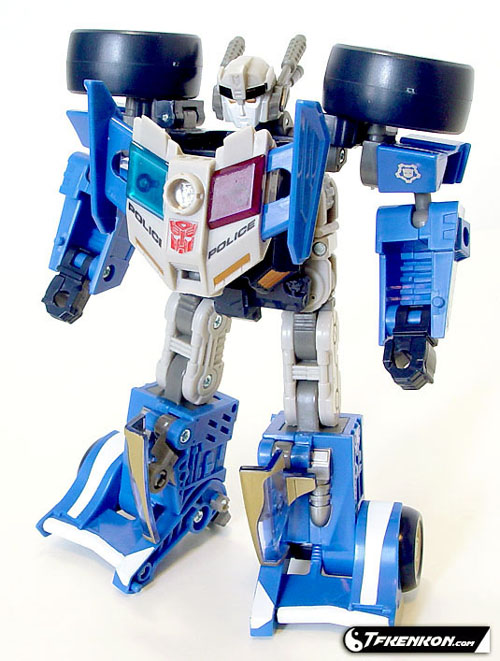 In robot mode, Prowl stands at 5 3/4" to the top of his head. His primary colors are the same, though he has more light and dark gray showing now, from his legs. As for articulation, Prowl bends at the knees and hips, his neck is on a ball-socket joint which gives him a wide range of positions if you leave his head slightly raised from the torso, he also has full shoulder and elbow joints and his wrists can raise up due to his transformation process. His head is rather plain looking and the exhaust pipes on either side, is one were to look at the art for Prowl, looked as though they can be positioned upward. They can't though and that may have improved the overall aesthetic for his head.

Utilizing the power of "the Spark of Combination," Prowl can combine with other Powerlinx Autobots to form larger, and sometimes sillier looking, robots. To form the upper torso from the robot mode, fold the head back and around do it faces down and return the arms to their original position. Bring the wheels up so that they touch each other and spread the legs out, returning the feet and Powerlinx hands to their original, retracted position. Flip the small, blue panel up, lower the arms, and swing the spoiler around front. Then attach Prowl to any Powerlinx Autobot in pants mode.

To form the lower torso from the robot mode, fold the head back and return the arms to their original position. Bring the wheels up so that they touch each other, bring the arm sections in, and swing the legs back. Flip the small, blue panel down, lower the arms, and swing the spoiler around front so that it is positioned down, according to the instructions. It does look much better upright, with the spoiler fully extended however. Then attach to any Powerlinx Autobot in shirt mode.

Prowl is an all right toy if you're looking for someone to Powerlinx other Autobots with. His spoiler shield in pants mode looks nice with Inferno and Hot Shot especially. The robot mode is rather weak looking and the head and face are just plain. The vehicle mode is rather cool though, but not enough to make up for the rest of this toy's faults.