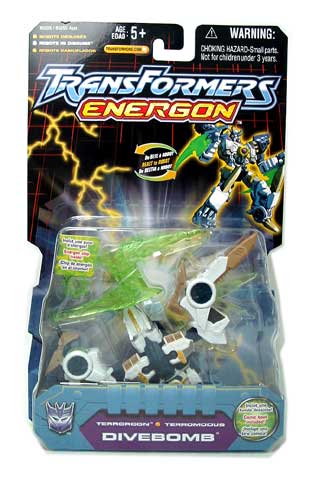 I wasn't too impressed by Divebomb when I first heard about him. However, once I saw the Energon cartoon, I was much more intrested in him. For a Terrorcon drone, this is a pretty neat action action figure.

Out of the Pack

Divebomb comes packed in his bird mode. Its hard to say what kind of bird he is. I personally like that the Energon toys are futuristic looking enough that a cyber-falcon is not such a far out concept. The white, gold, darkslate and green crystal give him a regal look a bird of prey deserves.

In addition to the figure, there are two accessories. As with most Energon figures, we got a green Energon spark crystal as well as Z-shaped Energon weapon. The weapon is a sword that snaps in half and doubles as two clubs or a single lighting-bolt sword. There was some controversy over the early releases that came with one sharp edge of the weapon halves. Hasbro has confirmed that the sharp-edge has been discontinued, and the dual-handle weapon will be in packaged with Divebomb from now on.

Divebomb transformers in six steps. Fold in the wings. Rotate the wings into leg position. Separate the bird head and pull back the bird feet. Fold up the robot head. Move the head halves to his sides at arm positions. Fold the bird feet to his back. Snap on his cyrstal and weapon into either of his hands.

Divebomb is nifty little guy and very well articulated for a basic figure. The arms have dual-direction hinges and ball-jointed elbows (a real joy to see a TF again), giving him as much range of motion as you could want in a 4" figure. The Head turns from side to side. The designers didn't skimp on leg mobility either. With articulated joints at the hip (ball), knee (hinge) and ankle (hinge) this falcon is capable of taking on a variety of attack and fight stances. While flexible, the figure is a little bit top-heavy and does not balance well when not holding his weapon.

Divebomb is a lot of fun. As a flying attack falcon, he is colorful and fearsome looking all at once. There is lots of articulation in hist robot mode that will satisfy the many applications that he can be used in as a drone. This figure is well worth the price for a basic, but a tad expense if you want to get enough of them to command your own swarm.