Be forwarned...this is not a typical review... This is more of a dedication to what Megatron is...if you want the point: go get E-Megs. Now I'll tell you why. 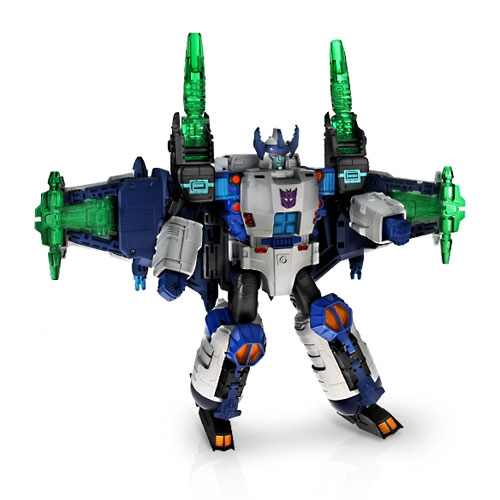 What is Megatron? He is the leader of the Decepticons. He is known for "Peace through Tyrnany." He has been a gun, tanks, T-rexs, dragons, Giant heads...but most of all, his is a personification of one thing: Power. From Fusion cannons, rail guns, pure savagry, Megatron is a symbol of pure raw Power.

When you buy him, he is in his gunship mode. He has 14 visible guns albeit 6 of them are just solid plastic on the nose, 18 when you lift the wings for hypermode and 19 when you add the tank. Plus 2 minicon pegs on the wings This form is a scary ship, the coloring of white and blue, like a giant bird of prey. The Klingons could win the war with one of these.

Transformation is easy, he practacly transforms himself, swing the engines back, sliding the landing gear down the leg to extend the feet, and make the jets his knee caps. This will also allow the fists in to lower from the arms. Pull shoulders apart, fold back nose, and flip up head. Fold down shoulder cannons if you like. Done. Very easy, very basic. Unicron, he is not...

First the detail in his face is great. He just glowers at you. His body LOOKS like a body! Not a cockpit with legs, a true robot body. His perporstions are perfect. A definit legs, torso, shoulders, etc. Dead on accuracy from the cartoon. I remember G1 megs...not a thing like his animated counterpart...You will see a slot in the nosecone, this is where you can store his sword. The tank can be attacted to his back via the sword. Also it can be attacthed to his arm as well with clamps that unfold. I have yet to see if Tidalwave can like to the arms as well. His legs are not the most possable, nor his arms, BUT he is stable, even with the tank on.

Now for the fun part...let's just LOOK at him. His face and head, Galvatron. Not the G1 figure, but the one that was in the cartoon, actually, I want to say movie because Megatron is not insane. He is what Galvatron was in the movie. Death on legs. His cannons on his shoulders show he will NEVER be unarmed...then there is a tank. A shadow of his former self...literally. This is a solid version of his armada form. The sword can attatch to the end so he can wield it on his arm. (my one gripe, sword can not be held). Also the tank is on his arm...like the G1 he has his own fusion cannon of sorts. I missed this actually. While I did like armada Megatron, just having the gun on his hip was..well off...as was the shoulder cannon with g2/beastwars neo...But having a wristmounted tank again just shows the power, plut the tank actually shoots, nice touch.

Megatron also has electronics, but the batteries are not included, (unlike Scorpinok blah)

Get this figure, I find him as essential as E Starscream, if not more. The detail is there, the love is there...the power is there for the taking.