King Atlas brings the latter G1 days screaming into the new millennium in this latest offering from Transformers Universe. Although he is a repaint, to many he may as well be a new toy. The first version of the toy, Skyquake, was only available in Europe and Japan near the end of the G1 line. The second time around it was released as Starscream for the short-lived Machine Wars line. 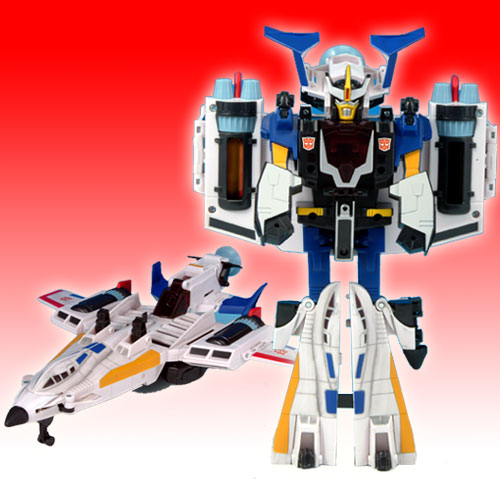 In vehicle mode, King Atlas measures slightly over 13 inches long with an 11 inch wingspan. His primary color is white with black, yellow, red, dark and light blue highlights and parts throughout. There is also some wonderful paint masking going on throughout the fuselage and wings. King Atlas has seen a lot of action and recently by the looks of it. This adds a nice touch of character to a toy that, officially, doesn't have one. Kudos.

The king shall not fight with scorch marks alone though. King Atlas also includes six bombs, whereas Starscream came with 10 and Skyquake with more, that can be placed in a number of places throughout the sides or wings.

King Atlas also features a number of features in this mode:

To transform into robot mode, flip the front-most sections of the nose cone out to the sides. The rubber tipped section folds out to the right. Flip the front section around 180 degrees and pull apart slightly. Flip the feet down and the rear stabilizers behind them out and stand him. Fold the wings back, flip the rear landing gear up, and extend the arms down. Fold the main engine section back and swing the large stabilizers up. Open the chest compartment, flip the robot head up and close up the chest.

In robot mode, King Atlas stands over 10 inches tall. There isn't much to speak of in terms of articulation. After all, this mold did originally come out at the tail end of G1 in Europe. King Atlas does have rotating shoulders and can raise his arms perpendicular to the ground beneath him. He also has pseudo-knee and pseudo-ankle joints, due to his transformation.

The paint applications in robot mode are nothing to sneeze or sneer at. His forearms are painted off-white on black plastic with yellow highlighting his upper arms. There is also silver highlighting around his clear, red chest panel. It's the face and helmet that feature a nice number of painted details. His face is silver with a yellow mouth plate similar in design to how Optimus Primal looked in the Beast Wars cartoon. His crest is silver with a yellow section in the center an din the center of that is a red vent. His black, unpainted eyes stand out quite well considering all the color around them.

Buy this toy. Seriously. The colors are better than this mold has ever had before and despite being rather brick-like in robot mode, King Atlas is still great for display or to play with.